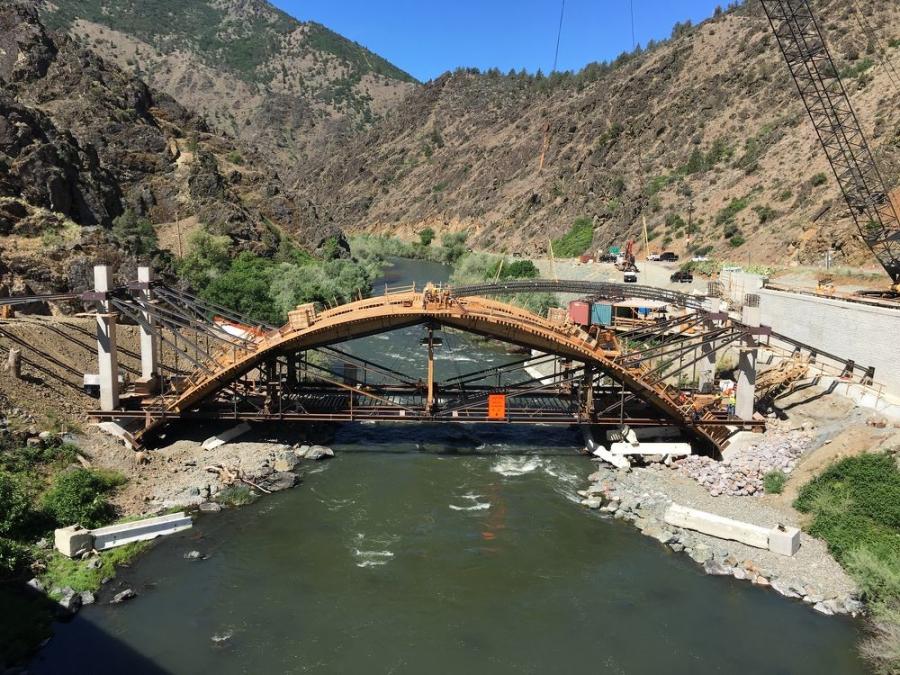 Equipment like a Liebherr LR 1250 crane, a Grove 150 crane and Link-Belt 330LX hydraulic excavators were vital pieces of machinery used on the job.

The new $18 million Klamath River Bridge, a 300-ft. long, one lane in each direction, arch structure located north of Yreka, Calif., constructed by Golden State Bridge Inc. for the California Department of Transportation (Caltrans), was fully delivered on Oct. 1 of this year.

The complex project dealt with many environmental hurdles, which required a unique falsework system envisioned and implemented by Golden State's Project Manager Paul Lukaszewicz, Superintendent Jim Banbury and Project Engineer Evan Huber to meet all concerns of the permitting agencies with no temporary structures in the flowing water. An engineered bridge removal plan also was required to dismantle the old structure and prevent debris from falling into the river.

The work took place near the city of Yreka, a Caltrans District 2 initiative, that also widened existing roads for today's standards. The bridge is located at the junction of State Route (SR) 96 and State Route (SR) 263. Crews completed the new structure in 2020 and in 2021 realigned the highway to tie it in to the new bridge and removed the old structure.

Golden State crews focused their efforts on safety, production, quality and meeting all the environmental constraints to complete the project. 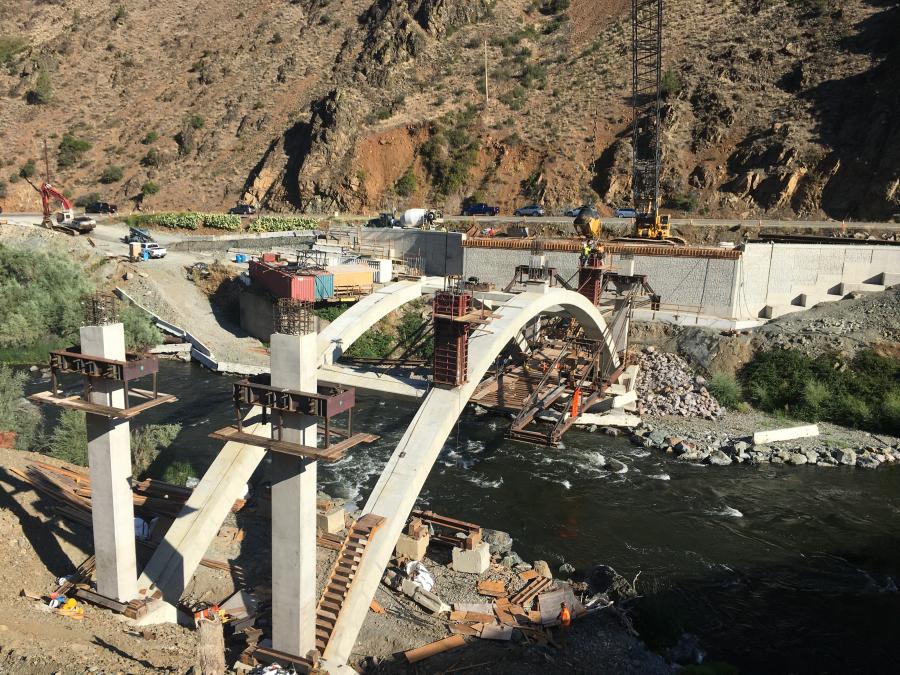 "Challenges included extremely difficult pile installation due to high water table, loose overburden consisting of sand couples and boulders with 30 KSI bedrock below," said Lukaszewicz. "Project plan errors in surveying the existing topography would have resulted in construction one of the piers in the flowing river. Incomplete staging plans resulted in the contractor restaging all the roadway realignment work and dismantling the existing structure due to its deteriorated unstable condition.

"There was an existing utility that interfered with the pile driving — a 60 KV electrical line that had to be relocated," he added. "It caused little bit of a delay. The CIDH pile installation was extremely difficult as we had loose soils over the very hard rock, consisting of sand, gravel and big boulders. Once we got through that, we struck bedrock was 30,000 PSI in water — it was the worst combination of everything for pile installations."

"It was extremely tight," said Lukaszewicz, who praised Caltrans' Andy O'Sullivan as being instrumental in working through changes for the construction plan. "We had to construct abutments first and then put our cranes on them. That was all we had for footprints."

Safety on the job also was paramount.

"We have an in-depth safety program that we implement on all our jobs," said Lukaszewicz. "We were dealing with live traffic, working at heights and figuring out pick-ups with our cranes. We have a very professional crew who take safety seriously."

"We had 360 pages of it," said Lukaszewicz. "There were fish, birds, turtles — you name it. The river is designated as ‘wild and scenic' and it has a salmon run, which comes under the jurisdiction of the many agencies involved as a cultural resource. A lot of people were concerned about the fishery. We were able to accomplish the job with a zero-take, aided by our means and methods. The impact on the river was minimal."

The new bridge is west of the old one and its location improved turning radiuses and sight distances and lowered the existing grade considerably.

"This required moving a substantial amount of hard rock by blasting and excavation," said Lukaszewicz.

Work on the new bridge began in April 2019 and it was completed 18 months later. The construction of the new alignment was delayed due to the weather.

"We had to come up with a new staging plan," said Lukaszewicz, "but working with Caltrans' Nicole Mallory, we devised one with the least impact to the traveling public. The realignment was done in a 30-day period with the closure of 263 and one-way traffic on 96 last April.

The demolition of the old bridge began last June and was executed by the end of July. 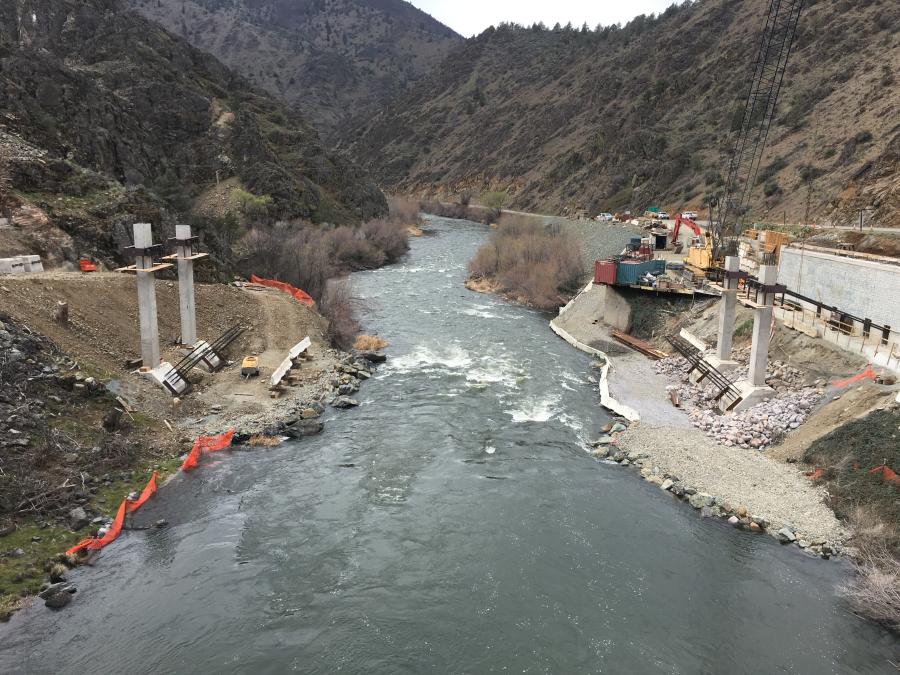 "It was challenging due to the river and the fact that it was not built back in 1939 to have that much traffic," said Lukaszewicz. "It was very deteriorated and our team of engineers determined that a typical dismantling of it would make it unstable, so we came up with a very detailed engineering plan that went really well and that everybody was happy with. Usually, with a concrete bridge, you take the deck off and drop the pullovers. This bridge had six independent spans, so we devised a method to pull over each span independently and we reinforced the existing structure. We built a hinge system and dropped it where we wanted on the ground.

Early on, the use of heavy equipment was key. This included a Liebherr LR 1250 crane, a Grove 150 crane and Link-Belt 330LX hydraulic excavators.

"We used the Grove on the north side to erect the strengthening elements and the Liebherr on the south side, which was placed further back, to erect the falsework, rebar and all the placing on this construction," said Lukaszewicz.

After setting up the flat locations for the cranes, the first step was to build the substructure, place the piles for the abutments and install the thrust blocks, all of which was done in the first season.

"We built the substructure, finished in October 2019, with the support from the cranes and then we started the installation of the falsework system for the arch," said Lukaszewicz. "The next step was to build the falsework for the superstructure, columns and spandrel columns that came off the arch. The superstructure was complicated because when you land an arch, it has to lowered equally. This required us to pour the bridge deck starting from the center of the arch to the spring line. We had two crews working with two Bidwell deck finishing machines and a heavy mixer truck from Siskiyou and Shasta counties supporting the effort."

The concrete arches were cast-in-place. Mountain Ready Mix built a larger batch plant on-site to provide the concrete for the deck pour.

"They went above and beyond to ensure that this phase was a success," said Lukaszewicz.

Other key subcontractors were Myers Earthwork for rock removal, paving and grading; Condon Johnson for the micro-pile work; and Pacific Steel Group for rebar.

The new alignment, 1/3 mi. on the 263 side and approximately 1 mi. for the 96 side, initially started in the first season of the project when the bridge substructure was completed, but was then put on hold until substantial completion on the bridge was achieved. Myers Earthwork was responsible for the road work.

"The 263 side went through a mountain of solid rock and on the 96 side, we lowered the existing road and had to go through the mountain on the north side, which consisted of 35 PSI limestone," said Lukaszewicz.

"We plan and execute everything," said Lukaszewicz. "We have detailed plans and when we execute them, we improve upon them. Our crew members are professionals. They travel with us from job-to-job and they are the best bridge builders in northern California. I work very hard to build a team dynamic and the work we do is very hard and some of it can be considered very dangerous if it is not done properly. Crews and management work together to execute difficult plans." 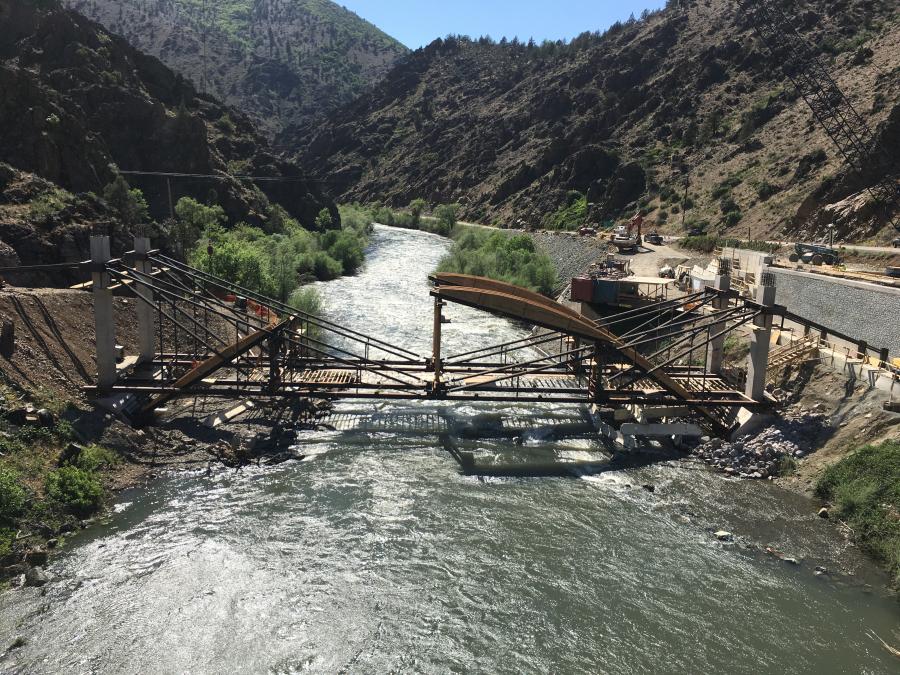 Peak days had nearly 30 to 40 Golden State and subcontractor employees on-site. A lot of Golden State's employees live in Nevada and all over California and for this job, they stayed at local hotels and in RVs.

Other pieces of equipment that were employed included Kobelco SK500 and SK350 excavators equipped with Rammer breakers.

"The hard rock tore up our drilling equipment, as did a lot of the earth work," said Lukaszewicz. "Both GSB and Myers Earthwork had our own field mechanics. We knew the type of work we were doing and brought plenty of spare parts to do timely repairs and stay on schedule."