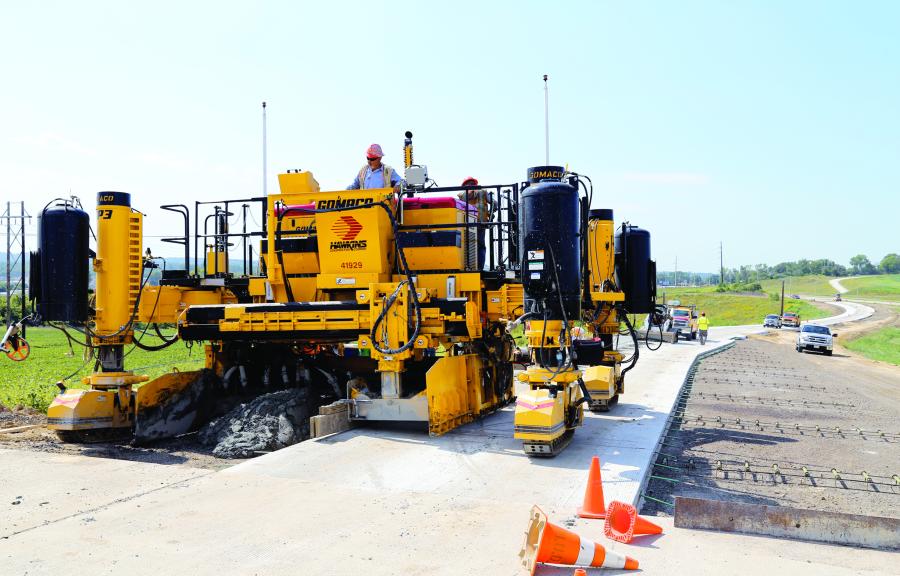 At the beginning of this concrete paving season, Hawkins Construction Company was in the market for a new concrete slipform paver. The paver would need to be versatile, capable of paving at different widths, fit inside urban restraints, and be easily transportable from one job site to the next around the city of Omaha. Representatives from Hawkins visited GOMACO for a first-hand look at the new GP3 paver. After seeing it in person, they knew it was the paver they needed.

“When we visited GOMACO, we looked at the GP3 and saw that it would fit our needs for this year, as well as being very compatible for future use,” Todd Allen, paving superintendent for Hawkins Construction, said. “Having a smaller mainline paver that can pave four feet wide in an urban area was very attractive to us. Then, we can go to 26 feet wide with the same machine, no frame extensions to put in or take out. The machine with the G+ system works together as a cohesive unit, it's very mobile, and gives us the ability to use 3D, GPS and sonar.”

Hawkins uses two different kinds of stringless guidance systems with their paver, Leica Geosystems and Trimble GPS. G+ Connect seamlessly integrates both systems with the G+ control system. The Trimble system uses a paver-mounted Trimble GPS receiver with GOMACO sonic sensors. They work with the G+ controller and its digital slope system to steer the paver and allow the mold to match the existing pavement. Hawkins Construction uses the 3D solution on their shoulder scab-on projects. The Leica 3D system with total stations is used on their free-standing pours.

The company also was in the market to purchase a texture/cure machine. Again, they went for the newest technology and purchased the GOMACO four-track T/C-5600 with the G+ control system. It has a four-track design with each track having 90 degree turn capabilities for easy width changes and easy transport, while G+ provides electronic-over-hydraulic steering and grade control for tining accuracy.

Both GOMACO machines, featuring tracks with 90 degree turn capabilities, allow Hawkins to quickly and easily move the equipment around in difficult job-site conditions. They also eliminate support equipment necessary to transport them. The paver and the texture/cure machine can just swing their tracks to the transport mode and drive right onto the trailer for transport. No ramps or other extra equipment is needed.

Hawkins Construction took delivery of their new GP3 paver on Thursday, June 16. The next morning, June 17, at 7 a.m., they were up and paving 26 ft. (7.9 m) wide with a 6 in. (15.2 cm) integral curb on both sides of the new roadway. The GP3 is equipped with a GOMACO 3100 series open-front mold with a telescoping diverter plow instead of an auger out front to move the concrete.

“It takes the auger out of the equation for quick width changes,” Allen explained. “We are constantly changing widths on the machine and the plow takes the auger out of the mud box to facilitate quicker and smoother width changes. The plow also can be easily adjusted to the width we need. Plus, we're familiar with the plow and feel we can put more concrete in the areas we need and knock down the concrete pile quicker before it gets to the mold.”

The GP3's first paving project was on Q Street on the west side of the city of Omaha. Hawkins used their Leica 3D guidance system on the project. The paver was also equipped with a 5400 series bar inserter. They slipformed a 2,300 ft. (701 m) long portion of Q Street.

“At least 50 percent of our work has some kind of four or six inch integral curb application,” Allen said. “Our mold is built with two foot left-hand and right-hand mold inserts that we can swap out with the different curb inserts to make those changes easier.”

“The GP3 puts out a really nice slab,” Allen said. “We've used it more for urban, non-profilograph jobs this season, but we're sure we're going to get a good ride out of the machine once we start working on some slabs with decent lengths. Next year we're looking at some job where we'll be doing some full width profilograph work.”

This year, Hawkins has kept the GP3 busy half-width paving and slipping shoulders, with the occasional 26 ft. (7.9 m) wide mainline project. Production has been very good with the new GP3.

“On one shoulder paving project, we used the Trimble GPS with GOMACO sonic sensors to pave. With that shoulder solution, we did 11,000 feet of five foot wide shoulder in a 10 hour period, so it's effective for our usages.”

Its versatility and ability to pave such a variety of widths has made it an indispensable tool for the company.

“Basically, the GP3 is used on every single one of our jobs in one way or another,” Allen said. “Our bread and butter is the ability to move the paver around to what suits our needs, where we're paving at, and we're constantly limited. The ease and ability of this machine to go from paving to transport to the new job, and back to paving is a very key element.”

“The control system ties everything together nicely,” Allen said. “It's simple to transport this paver. We pull it out of the slip, power wash and clean it off, rotate it sideways, swing the legs around, and walk it onto the lowboy sitting right there. We fold the wings in and leave the mold underneath it. Once we've moved it to the new site, without any drastic changes to the paver, we can be up and paving again in 30 minutes.

“The GP3 is a cohesive unit with all the systems working together nicely, so there's no third party issues to deal with as far as the stringless or anything else. It gives us the opportunity to do such different jobs and broadens our paving operation. The addition of that paver has also eased a lot of pressure on adjusting crew time and where the crews need to be because of the ease of transporting the paver to different jobs.”

Transportability and easy width changes were also key factors in Hawkins Construction's purchase of the T/C-5600 texture/cure machine. The T/C-5600 is being kept as busy as the GP3 paver, but the two have rarely worked together yet this paving season. They just meet each other during transport around the city of Omaha.

Hawkins ordered their T/C-5600 at 36 feet (11 m) wide with a 30 foot (9.1 m) wide longitudinal tining attachment. The texture/cure machine does have the ability to finish at 56 feet (17.1 m) wide. It has the ability to run without stringline and is equipped with sonic sensors to control steering, elevation and grade.

Easy width changes are accomplished with the T/C-5600's new walking end car with cure tank. Frame sections can be added or removed by turning the machine's four tracks 90 degrees and walking the end car to the required width.

“With the T/C-5600, we were looking for a machine to replace our other tiners while having the flexibility of width changes and pulling frame sections out,” Allen said. “We had to get to different widths on jobs with tighter clearances. It's worked out well for us. The adjustability to just drive it in, slide the rack over, and get it set up for another job tining and curing has been extremely easy.”

The T/C-5600 features the all new GOMACO Tracer Texture Control for tining depth accuracy. Sonic sensors trace the slab with the travel of the machine.

“We're always looking at the consistency of the tining and this machine does a fantastic job of keeping the tining depth consistent,” Allen said.

The texture/cure machine is guided by sonic sensors on Hawkins' stringless projects. Sensors are covered and mounted to the front and back and follow the edge of the new slab for steering. Two sonic sensors are mounted on the front of the machine and two on the back. They are covered with a circular spray guard to protect them from getting covered by the spray cure. These sonic sensors control the elevation and the crowning adjustments.

“The sonics take away any need for manual adjustments going in and out of crown sections. It does it for you,” Allen explained. “The consistency is far greater than anything you could do manually going in and out of those transitions. We also have very consistent tining depth.”

In the construction world, first the texture/cure machine tines the slab, then backs down the length of tined slab and repeats the pass putting down the white spray cure. The T/C-5600 is a one-pass operation saving time, labor and fuel on projects.

“At the rate the machine runs with the tiner, we can cure and tine at the same time. It takes obviously one less pass out of the equation,” Allen said. “There are a lot of positives about this machine and that's a major one.”

Time, labor and support equipment are also saved when it comes time to transport the machine to the next project. The machine's tracks are turned to 90 degrees and it can be driven right onto a trailer and hauled away. Ramps are not necessary to get the T/C-5600 on or off a trailer.

Overall, Hawkins is pleased with their new GOMACO equipment and look forward to finishing a busy paving schedule this season. GOMACO will be there to support them from just two hours away.

“It's been great support from GOMACO,” Allen said. “Hawkins is somewhat non-traditional compared to other companies, as far as how we move around and everything else. GOMACO has been willing to work with us and even redesigned some things for us to the way we like. We have a very good relationship with them.”

(This story was reprinted with permission from GOMACO WORLD magazine, Vol. 44, No. 1.)