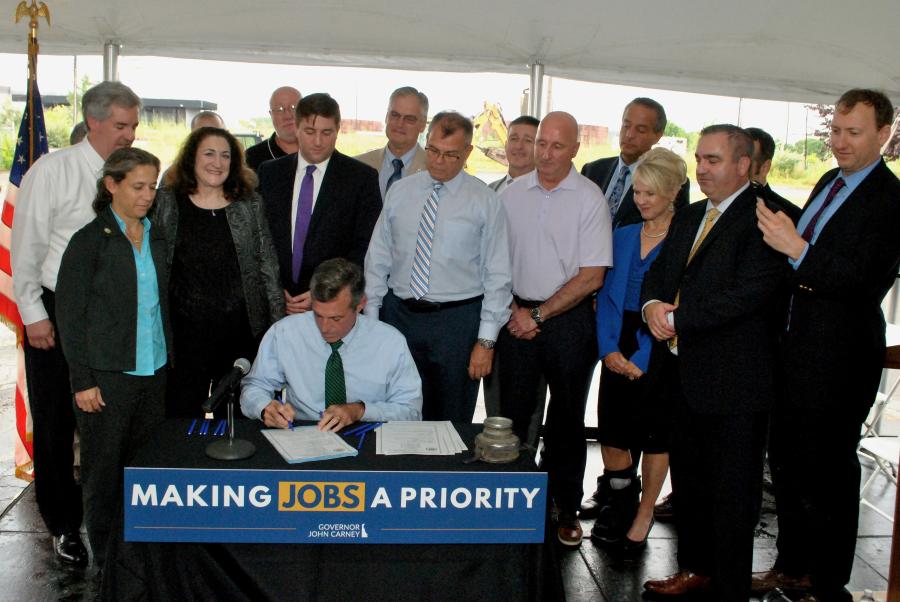 Carney — who called for responsible changes to the Coastal Zone Act during a joint address to the General Assembly in March — signed the legislation at the former site of chemical manufacturer General Chemical in Claymont, now owned by D2 Management.

“This spring, I urged members of the General Assembly to make responsible changes to the Coastal Zone Act that would allow us to create new jobs, while continuing to protect our environment. The responsible changes in this bill meet that test,” said Carney. “By passing this legislation, the General Assembly recognized that we can clean up our abandoned industrial sites, responsibly redevelop them and put them back to work for Delawareans. This new law will help create good-paying jobs, and help us ensure that Delaware's economy works for all Delawareans. Thank you to Representative Osienski, Senator Townsend, and all members of the General Assembly for their leadership on this issue.”

“I strongly believe the 46-year-old Coastal Zone Act was — and still is — a landmark piece of legislation. It has limited heavy industry activity to only 14 sites, comprising less than 2 percent of our total coastal zone, and House Bill 190 does not change that,” said Osienski, D-Newark. “House Bill 190 and the conversion permit it creates will achieve the balance between protecting our coastal zone and allowing responsible companies the opportunity to redevelop on the original 14 sites that were active when the CZA passed in 1971.

“If we are able to convert some of these abandoned brownfields into active industries, these sites could employ hundreds, even thousands, of Delawareans, offering good-paying jobs that could become careers for many,” said Osienski. “The process of remediating and building up an industry would mean more environmental cleaning and construction jobs. An active industry would contribute personal income taxes, corporate income taxes, and property taxes to our local school districts once again.”

Townsend led the effort to approve the law in the Senate. He said the new law strikes a good balance between economic development and environmental protection.

“These changes to the Coastal Zone Act have been robustly debated, as well they should have been because, nationally, the CZA was and remains landmark legislation. I'm confident that the limited scope of the changes we're making today and the regulations that will govern them will breathe new life into abandoned industrial sites while staying true to the principles underlying Governor Peterson's vision,” said Townsend, D-Newark. “It is a vision of balance and of environmental protection, of limited heavy industry along a largely undeveloped coast. We owe it to present and future generations to get that balance, and enforcement, right.”

“Let's be clear, the protections for the vast majority of the Coastal Zone will remain in place and unaffected,” stated Gray, R-Selbyville. “This legislation will appropriately channel development to sites which are best situated to support these types of operations. It provides some common-sense flexibility, allowing for the clean-up and re-use of industrial brownfields in a way that will lead to the creation of new, quality jobs, while maintaining a commitment to environmental protection.”

“The amending of the Coastal Zone Act continues to realize the original intent of the Act in striking a balance between protecting the natural resources and environment of Delaware's coastal zone, and spurring our state's economy,” said Shawn M. Garvin, DNREC secretary.

Companies seeking a conversion permit must submit an application that details the environmental and economic impacts of previous uses and planned redevelopment of the site, a proposal to offset any negative environmental impacts of industrial redevelopment, and a plan to prepare the site for the long-term effects of sea-level rise.

“At D2, we've always known the site had great potential, but this legislation was crucial to attract larger industrial tenants,” said Keith Delaney, president of D2 Management, who hosted the signing event at the former General Chemical site. “The passage of this bill is a transformative first step toward revitalizing Delaware's manufacturing industry and creating many new construction and permanent jobs in the region. We thank the Governor and the legislators for their tremendous vision and support.”