"While leaders in Washington talk about investing in infrastructure, we're actually doing it at historic levels and the transformation of JFK Airport into a 21st century transportation hub will ensure New York remains the nation's front door to the world," Cuomo said. "This historic investment to modernize JFK Airport and the surrounding transportation network will not only ease travel through this major hub, but it will ensure JFK joins the ranks as one of the finest airports in the world."

"We know how powerful investing in infrastructure can be as a boost to our economy and a driver of job creation," said Lt. Gov. Kathy Hochul. "Here in New York, we have transformed our state with record investments in infrastructure, especially at our airports. This latest plan for the modernization of JFK will build upon our efforts to improve the transportation network of this world-class facility, and enhance the traveler experience."

The governor's JFK Vision Plan, initially unveiled in January 2017 and based on the recommendations from the Governor's Airport Advisory Panel, calls for an overhaul of the airport's hodgepodge of eight disparate terminal sites into one unified JFK Airport by demolishing old terminals, utilizing vacant space, and modernizing on-airport infrastructure, while incorporating the latest in passenger amenities and technological innovations.

The Vision Plan also calls for increasing the number and size of gates; improving parking availability; an array of airside taxiway improvements to allow for bigger planes and reduced gate congestion; upgrading the AirTrain JFK system to handle increased passenger capacity; and enhanced roadways on and off the airport. This includes better access to JFK from regional roadways, particularly the Van Wyck Expressway and the Grand Central Parkway, including the Kew Gardens Interchange.

This announcement follows the selection in September 2017 of a master planning team for the redevelopment of the airport, led by Mott MacDonald and Grimshaw Architects, and whose portfolio of prior master planning and redevelopment projects includes airports in London, Singapore, Hong Kong, South Korea, Germany, the Netherlands, Canada and Australia.

Starting late last year, the Port Authority of New York and New Jersey, which oversees JFK Airport, embarked on an extensive and rigorous process with the airport's existing six terminal operators — each of which operates under a long-term lease agreement — seeking proposals from each of them to modernize, expand and/or replace their facilities.

These proposals were in turn evaluated by a formal comparative analysis team, comprised of seasoned experts, against a set of established criteria to determine the best combination of developments that would achieve the core master plan objectives, as well as fully leverage the Port Authority's previously approved $1 billion capital plan commitment.

The plans for the two terminals announced will now be submitted to the Port Authority's Board of Commissioners. Once lease terms are finalized, the leases will be subject to final Board approval. Additional discussions with multiple other airlines and terminal operators remain ongoing to further advance the goals of the Vision Plan.

State-of-the-art technological improvements will be part of the terminal upgrades, with security enhancements — such as radiation detection and next-generation identification of unattended packages.

At the center of the airport, the Port Authority will seek proposals to develop the new Kennedy Central hub, issuing a Request for Information in the coming months to determine the most effective and functional way to leverage this blank canvas in a fashion that will complement and add value to airport experience. Options might include, but aren't limited to, public open and recreational space, conference centers, cultural uses and other amenities for the traveling public and the airport's workforce.

The proposed new $7 billion, 2.9 million sq. ft. terminal on the airport's south side will be developed by the Terminal One Group, a consortium of four international airlines — Lufthansa, Air France, Japan Airlines and Korean Air Lines. The plans call for replacing JFK's Terminal 1 (20 years old and undersized), which the group currently operates, and Terminal 2 (56 years old and functionally obsolete), as well as the area left vacant when Terminal 3 was demolished in 2014.

When completed, it will yield a net increase of more than 2 million sq. ft. from the existing terminals and provide 23 international gates, 22 of which will be designed to accommodate larger, wide-body aircraft (FAA Airplane Design Group V or VI) such as the Boeing 787 Dreamliner or Airbus A380, which provides seating for more than 500 passengers.

The new terminal will contain at least 24 security screening lanes; more than 230,000 sq. ft. of retail, dining and other concessions; 116,000 sq. ft. of airline lounges; and 55,000 sq. ft. of interior green space, children's play areas and cultural exhibits. The complex will be operated by Munich Airport International and will be connected to the existing Terminal 4, which initially opened in 2001 and has been expanded twice since then, most recently in 2013.

On the airport's north side, the proposed new $3 billion, 1.2 million sq. ft. terminal will be developed by JetBlue. JetBlue plans to demolish Terminal 7 (48 years old, undersized and functionally obsolete) and combine it with the vacant space where Terminal 6 was demolished in 2011 to create a world-class international terminal complex that would be connected to the airline's existing Terminal 5 and be occupied by the airline and its various partners currently spread throughout the airport. Terminal 5 opened in 2008 and is the newest of JFK's current six terminals.

Construction is expected to begin in 2020 with the first new gates opening in 2023 and substantial completion expected in 2025.

An additional $2 billion in private non-Port Authority funding will be allocated to an array of critical infrastructure upgrades laying the foundation for these world-class new terminals.

JFK Airport is one of the region's most powerful economic engines, supporting roughly 300,000 jobs that pay $16.2 billion in wages annually while generating $45.7 billion in yearly sales. The airport set a record with nearly 60 million passengers in 2017 and is projected to eclipse 75 million passengers by 2030. Together, the new terminals are estimated to create more than 9,600 direct jobs, including construction jobs and more than 15,000 total jobs over the life of the project.

Outside of the terminal buildings at JFK there also is a need to simplify the spaghetti-like roadway system and enable quicker access to all terminals for private cars, taxis, ride-share and other for-hire vehicles, as well as reconfigure parking lots to ensure short-term and long-term options are more easily accessible.

Plans call for the terminal areas to be linked by two main "ring roads," a north loop and a south loop, which will make it easier to enter and exit the airport while providing significantly easier access to the terminal complex areas on the airport's north and south sides.

Off airport, the New York State Department of Transportation has targeted $1.5 billion in highway improvements designed to ease bottlenecks, particularly at the Kew Gardens Interchange with the Van Wyck Expressway and on the notoriously congested Van Wyck as well. The goal is to help reduce travel times for vehicles between midtown Manhattan and the airport.

Construction is slated to begin later this year on improvements to eliminate bottleneck conditions at the Kew Gardens Interchange — originally built in the 1930s — with the Grand Central and the Van Wyck Expressway. It still contains a series of ramps that do not meet today's standards, and the improvements are expected to be complete by the end of 2022.

On the Van Wyck itself, the 4.3-mi. trip between the Kew Gardens Interchange and JFK airport can take more than a half hour during peak times. To improve the situation, the DOT is planning to build a fourth lane in both directions, which would be restricted to passenger vehicles with three or more people and for-hire-vehicles with at least one passenger. The environmental approval process is under way and expected to conclude in early 2019, with construction slated to begin in late 2019 and finished by end of 2024.

With respect to mass transit, the Port Authority will be adding 50 percent capacity to the AirTrain JFK system as well as increasing frequency of service to keep up with rising demand. More than 7.6 million paid passengers used the system in 2017, with another 12.6 million more riding it to connect between terminals and access ground transportation. Additionally, at Jamaica Station the Long Island Rail Road is constructing a new, 12-car platform that will increase capacity for those traveling to and from JFK.

The governor also announced the creation of the JFK Redevelopment Community Advisory Council, composed of elected officials, community boards, nonprofit organizations, civic organizations and clergy leaders. The Council will be chaired by Queens Borough President Melinda Katz and U.S. Congressman Gregory Meeks, and will work with the Port Authority to expand community outreach efforts that are already under way, ensuring this ambitious project solicits ongoing feedback from local stakeholders as well as provides meaningful opportunities for local businesses, MWBE businesses and jobseekers.

This includes a commitment to the governor's nation-leading goal of 30 percent utilization of MWBEs, which applies to contracts as well as financing interests. A community office for the project will open in Jamaica, Queens later this fall, providing easier access for firms looking for business opportunities as well as local residents in search of jobs.

"We are extremely grateful for the support of the governor and Port Authority as we partner with them to return JFK Airport to world-class status. 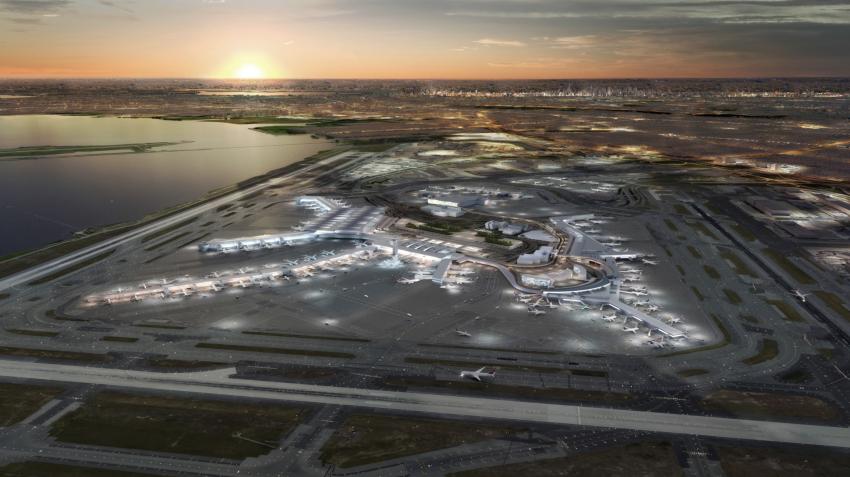 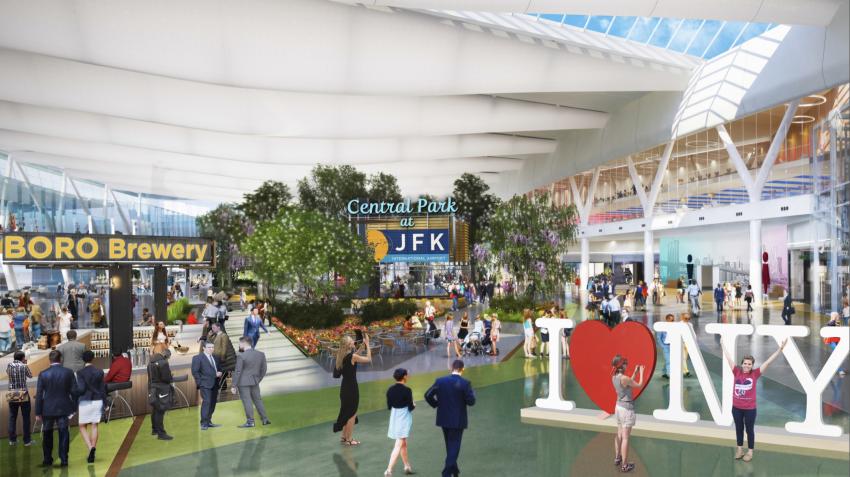 The airport will be anchored by two new world-class international terminal complexes on the airport’s north and south sides. (Gov. Cuomo’s Office photo) 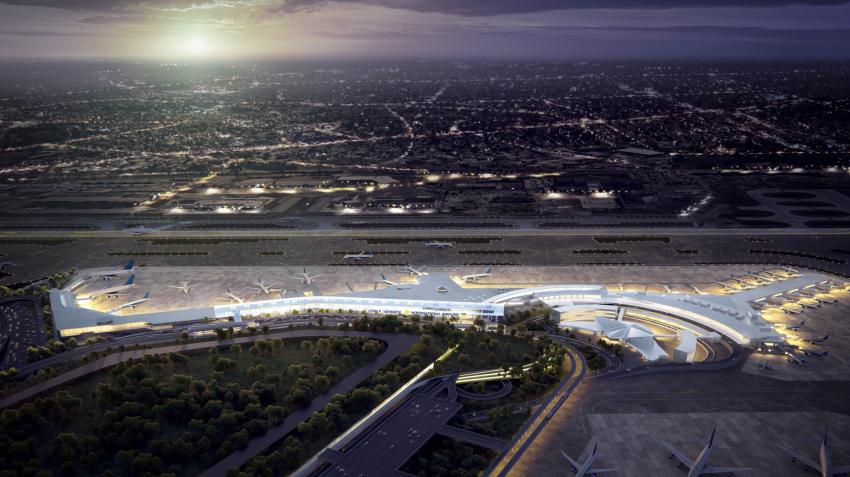 The plans for the two terminals will be submitted to the Port Authority’s Board of Commissioners. (Gov. Cuomo’s Office photo) 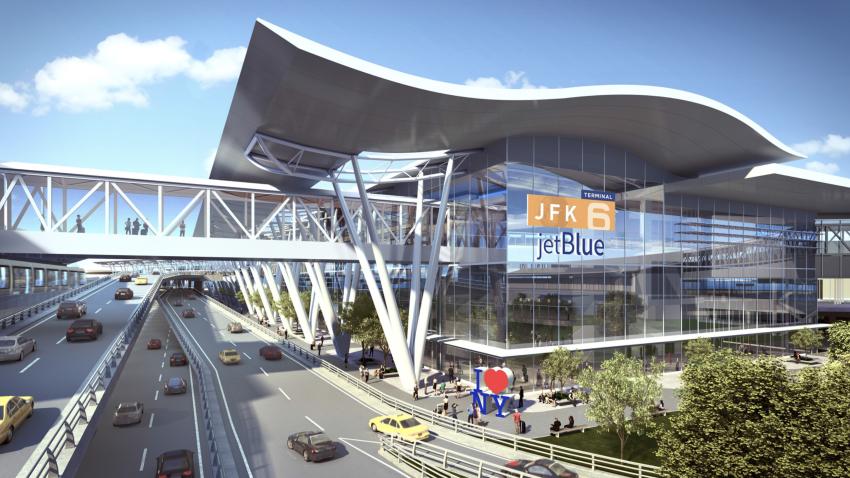 On the airport’s north side, the proposed new $3 billion, 1.2 million sq. ft. terminal will be developed by JetBlue. (Gov. Cuomo’s Office photo) 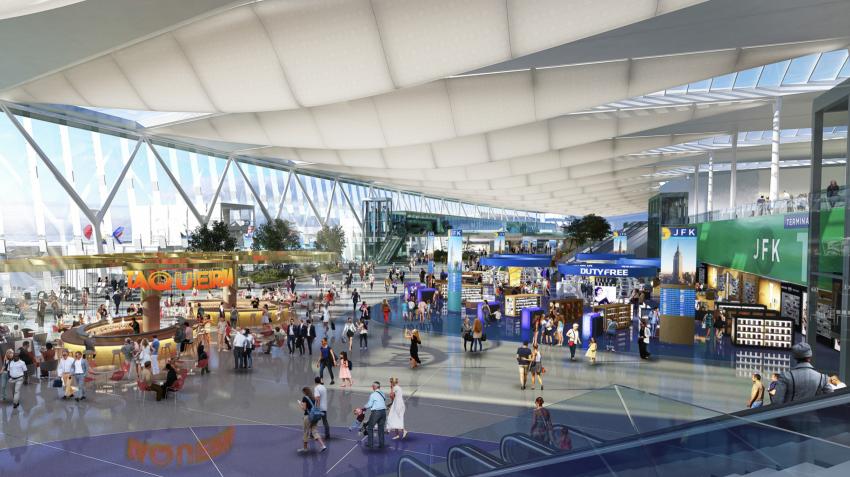 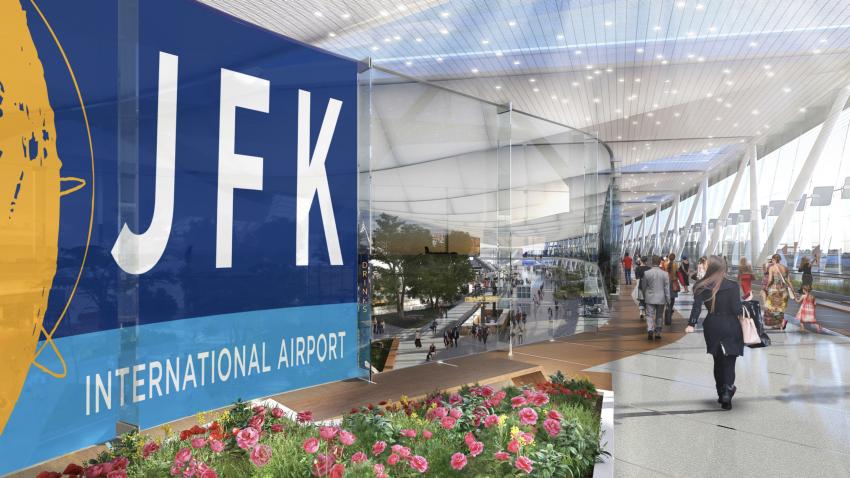 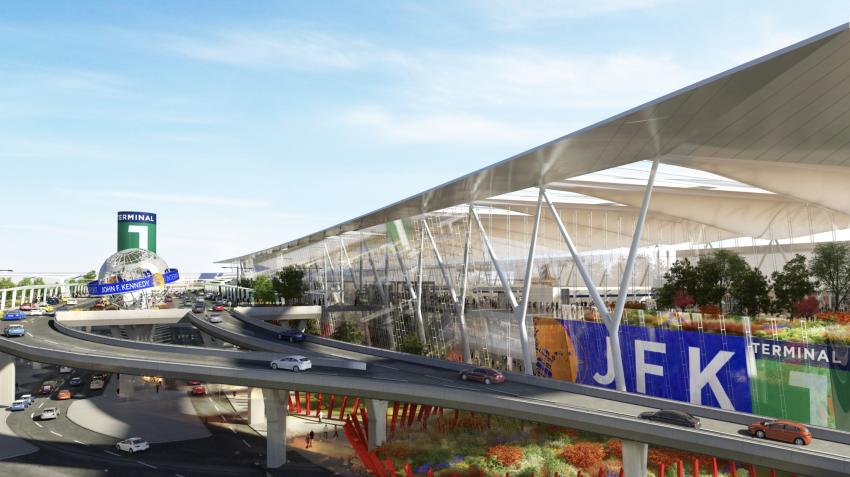 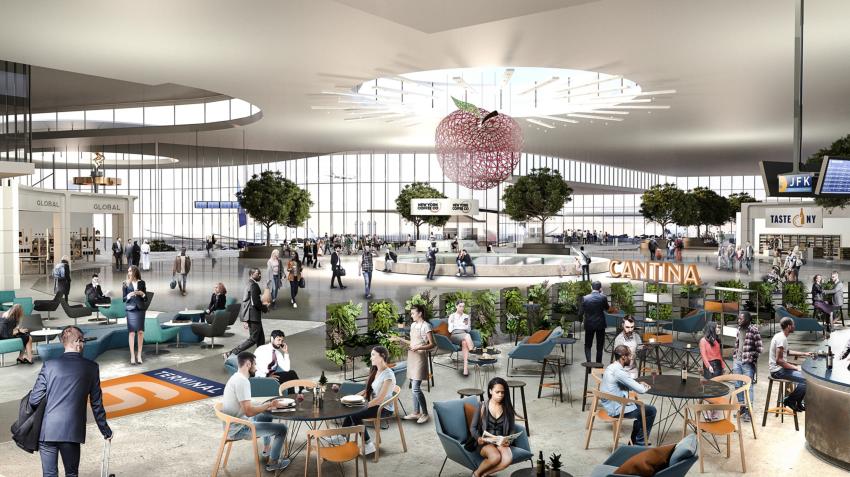 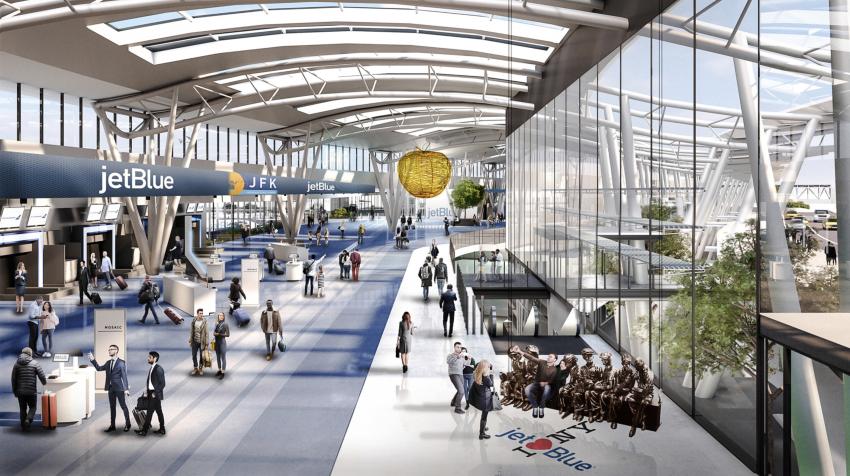 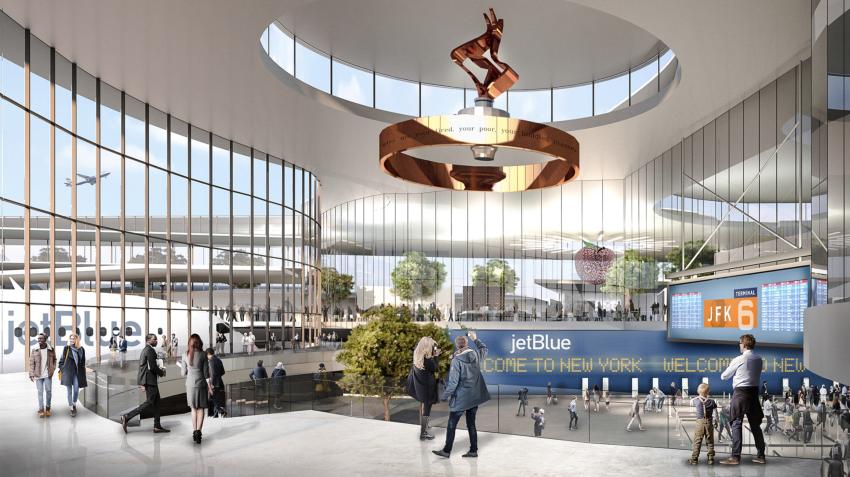 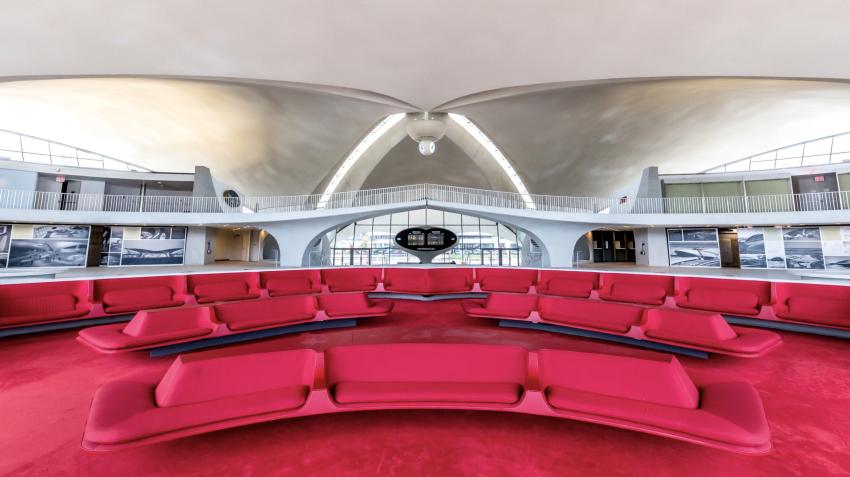 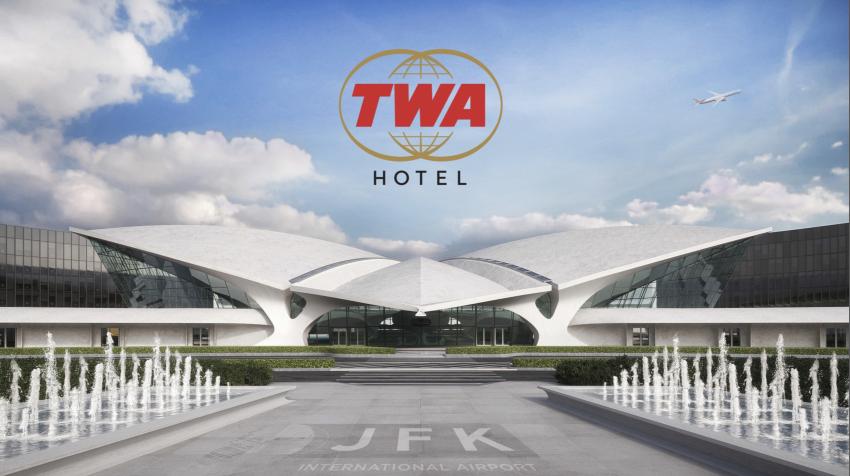 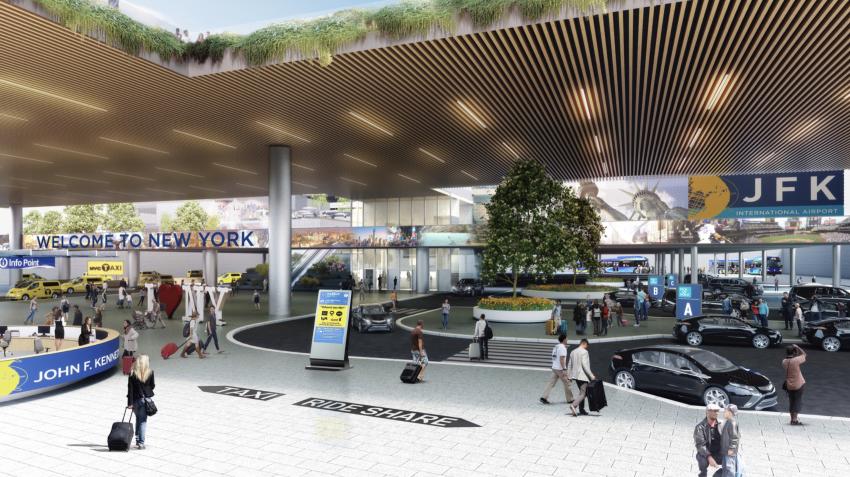 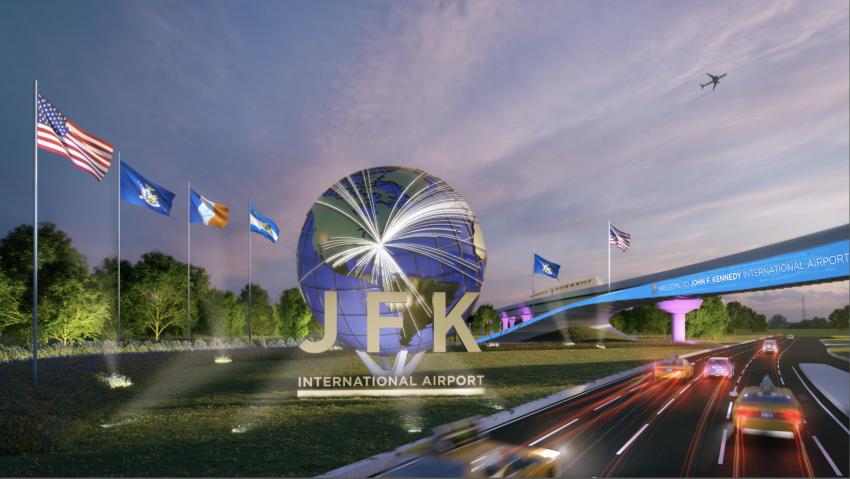 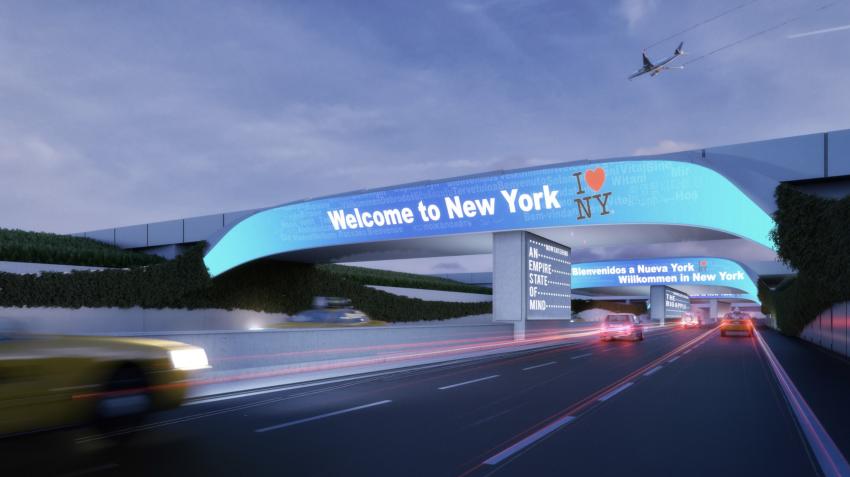 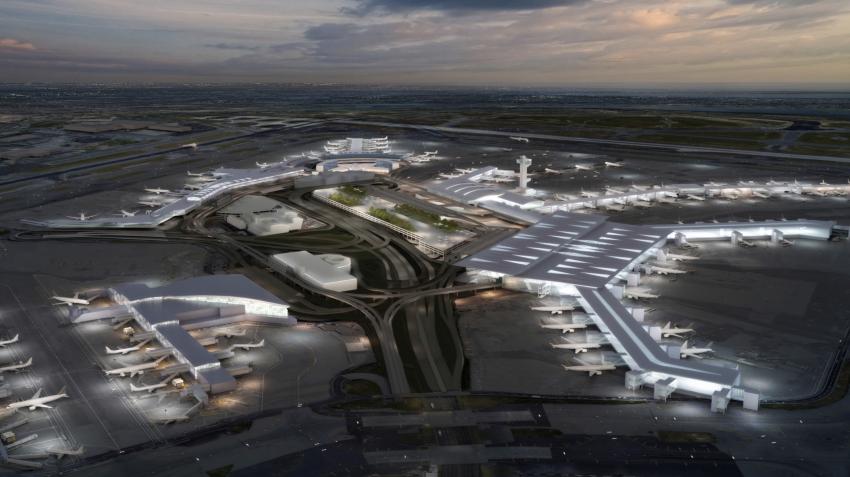 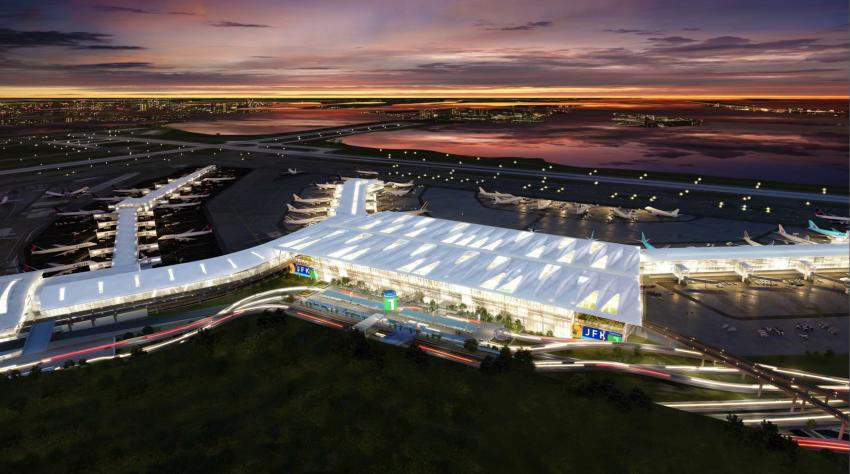 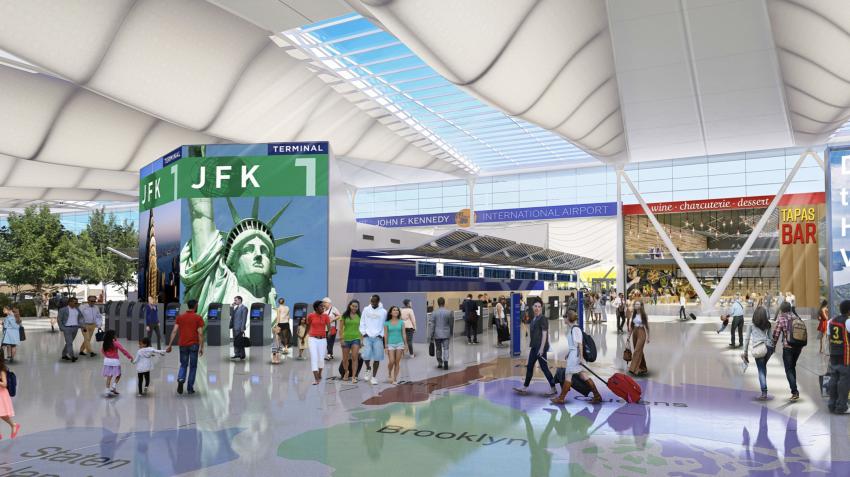