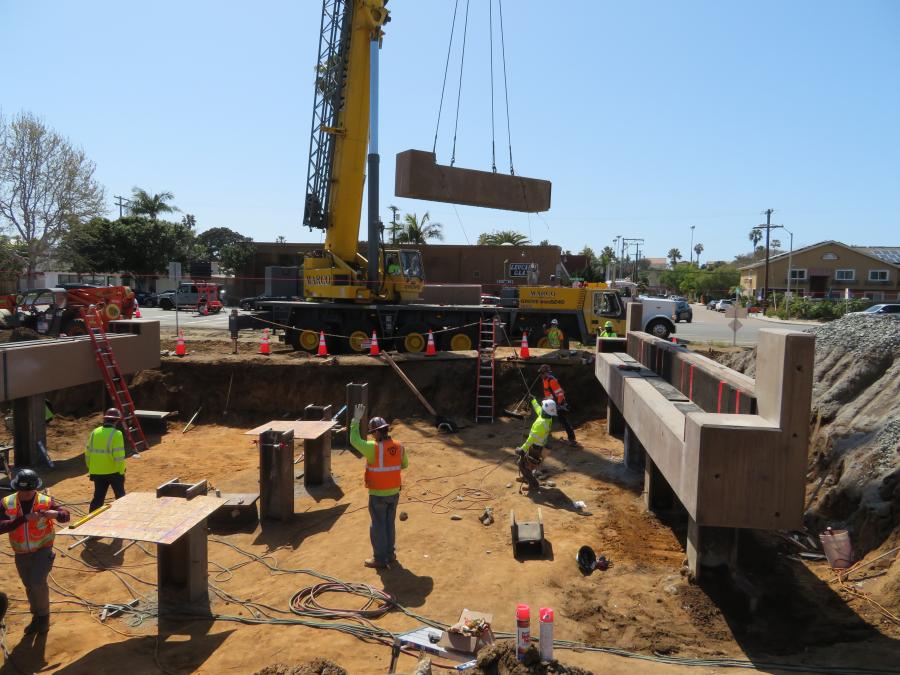 Mahaffey Drilling, working with Granite Construction, drilled 16 piles to support the new railroad bridge, which is a key element for the El Portal Undercrossing in Encinitas, Calif.

People living on or near North Vulcan Avenue in the Leucadia district of Encinitas had a problem. This beachfront community in north coastal San Diego County is home to Coast Highway 101 and Los Angeles to San Diego (LOSSAN) railroad tracks, which carry 37 passenger and freight trains per day. The railway was built in 1882 and the city grew up around the tracks. The problem for many residents was that the beach, the restaurants and shopping areas are located on the west side of the tracks while much of the housing and Paul Ecke Central Elementary School is on the east side. The elementary school also was home to bustling Leucadia farmer's market on Sundays.

The city of Encinitas decided to do something about this problem. It raised the funding for the project and called on a team of engineers and consultants to draw up plans for the El Portal Undercrossing and shared-use path. El Portal is a street west of the tracks that dead-ends next to Coast Highway 101. The project would benefit shoppers, students, pedestrians and cyclists. The city of Encinitas selected the San Diego Association of Governments (SANDAG) to take over the bidding and construction administration of the project on behalf of the city in 2020. 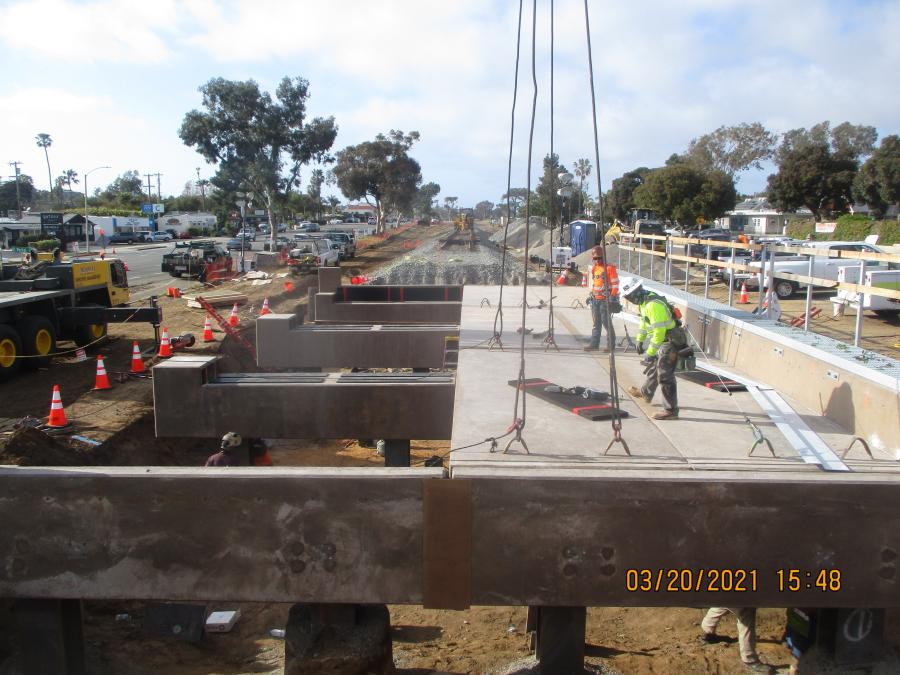 SANDAG executes the capital improvement projects on the North County Transit District's portion of the LOSSAN railway in San Diego County and built a similar undercrossing at Santa Fe Drive in 2013 about 2 mi. south of the new El Portal Crossing. SANDAG put the project out to bid and the low bidder, Granite Construction, was selected to head up the construction of the project and coordinate the activity of various subcontractors to make the undercrossing a reality.

"This is a really exciting project for the city because it will connect people east and west of the railroad tracks who don't have amenities on the other side," said Encinitas Mayor and SANDAG Chair Catherine Blakespear. "Residents are going to be able to visit friends and be able to walk to the beach and recreate in the ocean. This provides that connectivity that we don't have in this corridor. I'm grateful we're able to devote general fund money to it."

Granite's job is a $6.7 million project to construct an underpass similar to an undercrossing opened in 2013 near Swami's Seaside Park at Santa Fe Drive, about a mile south of where the El Portal undercrossing job would be built.

Granite Construction, based in Watsonville, Calif., has a long history of building bridges to accommodate highway traffic and road construction. The company has also led complex projects that involve managing live traffic while new construction is happening. Still, the El Portal Undercrossing had new elements, including building a bridge for railroad traffic, which is considerably heavier than road traffic.

"As a builder of highways and bridges, we have done similar jobs in terms of bridge work, retaining walls and foundations," said Bobby Shadkam, Granite's project manager of the job. "It is in our wheelhouse of projects we do."

The key elements of the project called for a new precast railroad bridge supported on foundation piles. "The team determined four weekends that we could work from Friday at midnight to Monday morning at 4 a.m. to get the initial work done," said Shadkam. The work was completed in three weekends in 2021: February 20 to 21, March 13 to 14, and March 20 to 21. 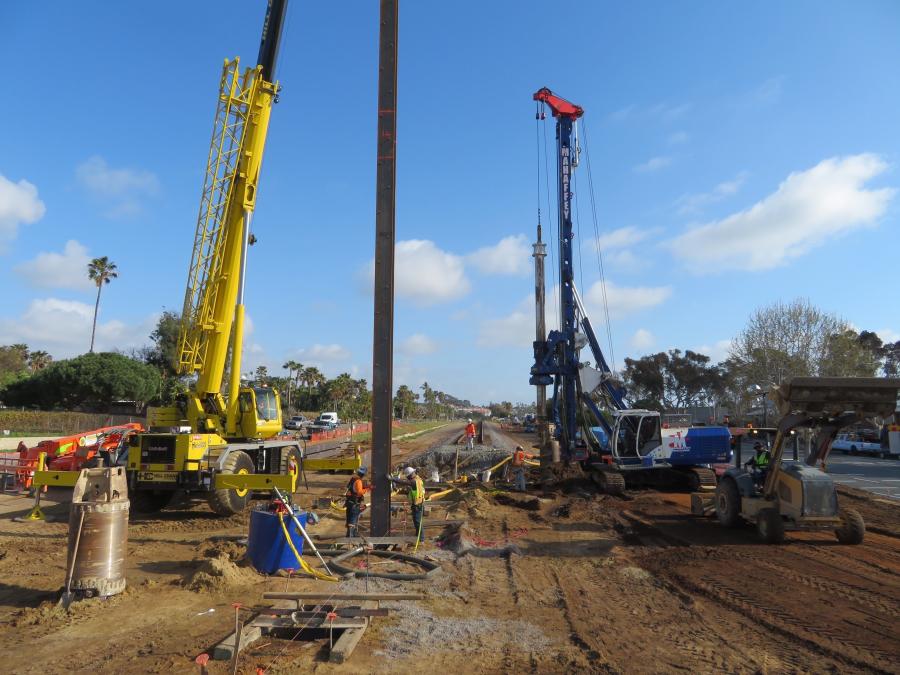 "Our plan was to drill 16 piles, each about 50 feet deep to support the new bridge," said Shadkam. "We were able to get eight of them drilled in the first weekend and eight more piles the second weekend. Then each was encased in concrete."

The concrete bridge elements were precast concrete fabricated off-site by Con-Fab California near Bakersfield, then hauled over five hours to the El Portal project. During the March 20 to 21 work details, the precast elements were welded to the piles. The workers then built the bridge abutments to help solidify the structure for the heavy loads they will sustain for years to come.

"As usual with projects like this, we had to relocate some utilities," said Shadkam.

With the support in place, Granite's welders secured bent caps on top of the piles and precast concrete to form the platform of the new bridge. Sixteen steel girders were installed to further the structural integrity of the bridge. Finally, waterproofing material was laid on the platform to prevent moisture in the future from seeping into the structure and corroding the bridge elements. Only then could the workers return the ballast and the tracks for Monday morning use.

Each step of the project carried its own set of complexities. "Not only was there limited time for all the steps we needed, but we had a lot of workers and equipment in a small space," said Shadkam. "In addition, we had to get 12 certified welders who would be willing to work weekends for that operation. We also had to insist that the welders take rest time during the week so they would be ready for that grueling weekend schedule."

As with almost all construction projects during 2019-2020, COVID was a concern as social distancing and masks had to be factored into the work. Construction workers were considered essential workers. "We held many of our meetings virtually that we would have had in person," said Shadkam. "We missed some of the interpersonal relationships that are often so important to forming a close team, but that did not interfere with the planning or execution of the project." 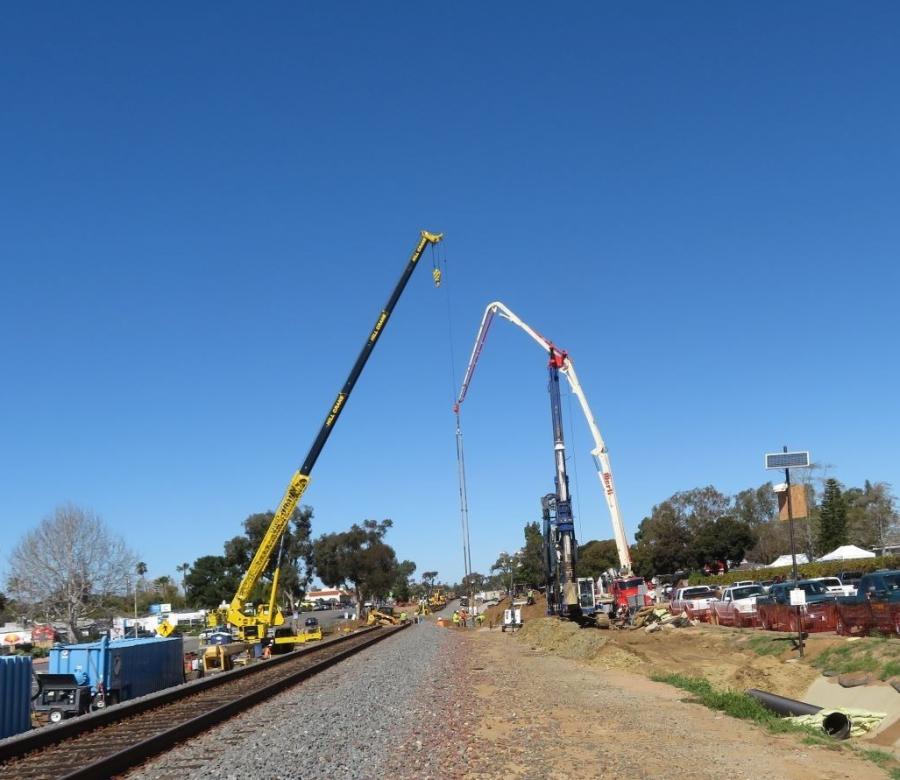 Another COVID-related problem was sourcing the material, especially the made-in-America steel. The construction team was forced to look further afield than normal to find everything they needed for the project.

"We built the job according to railroad standards, with an expected 100-year life span," said Shadkam.

Much of the "heavy lifting" on the project is done, while much work still needs to be done before the underpass is ready to open by the end of April 2022. Considerable landscaping and earthmoving must be done as well as the installation of drainage systems. Retaining walls will soon be under construction and will be followed by architectural treatments, post and cable fencing, stairways, curbs and gutters.

"I'm proud of the fact that we were able to work together as a team with the SANDAG, the other stakeholders [NCTD/City of Encinitas] and the various subcontractors and suppliers to make this happen," said Shadkam. "Having good communication with SANDAG helped us keep with the aggressive schedule. Everyone on the team stayed focused on the work and didn't let egos get in the way. When the underpass is complete, I believe the people of the city will get a lot of enjoyment out of it."