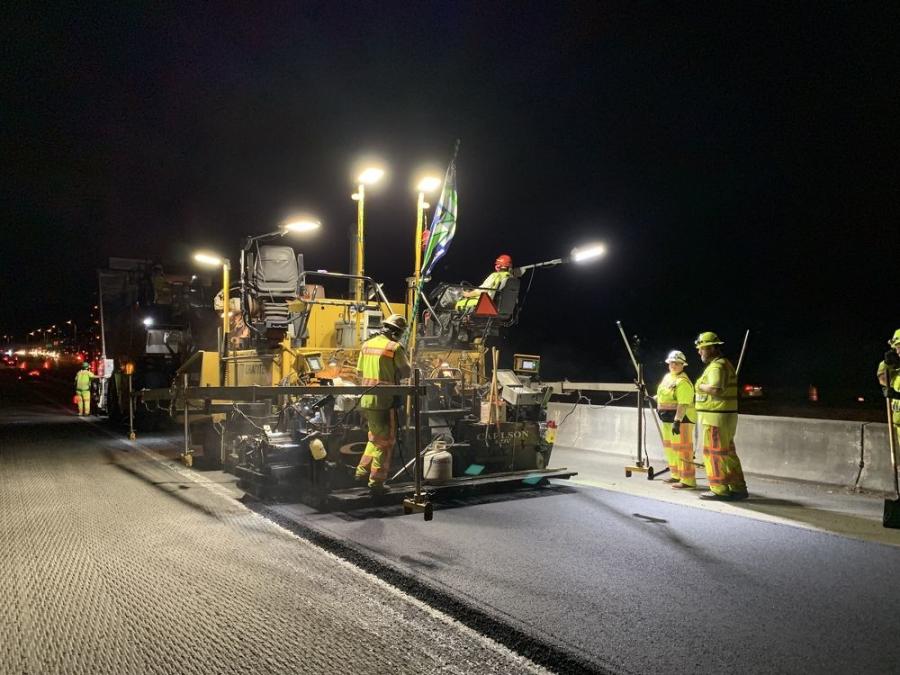 The project required night paving because of the heavy traffic, which included trucks bearing cargo from the Port of Seattle and passenger traffic arriving from ferries.

A driver traveling north on I-5 from Seattle toward the Canadian border might note the variety of transportation arteries that surround this busy interstate. The heavy truck traffic rolling out of the Port of Seattle carries cargo out of container ships docked from around the world. Seattle's location in the Puget Sound means commuters and visitors scurrying to their destinations after traveling from the islands in the Sound via the Washington State Ferry System. In addition, an active bus transit station shuttles passengers and commuters over 40 routes each day. And finally, a section of the light rail system is under construction, which will carry passengers northward, then cross over the freeway to deliver passengers traveling south. 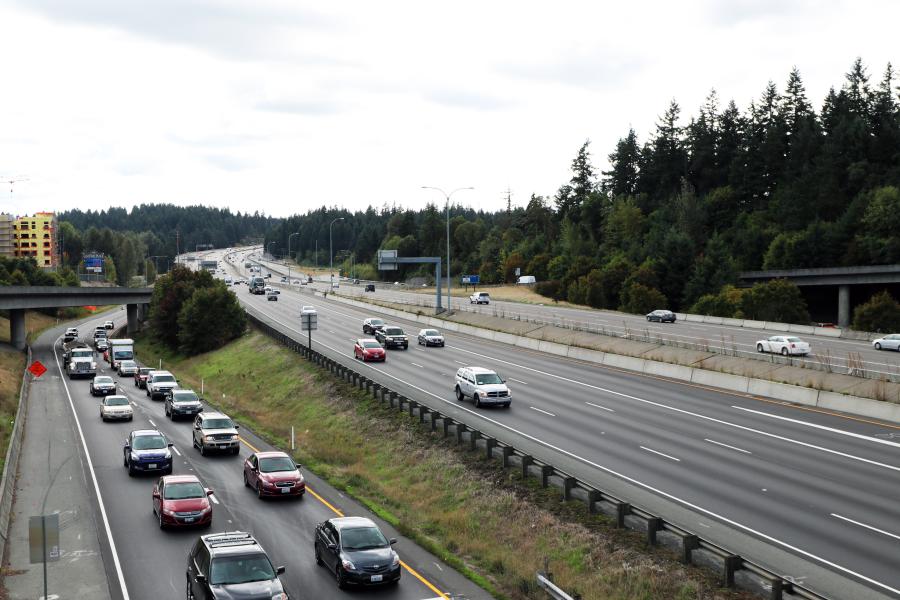 This interstate bulging with travelers also is intersected by numerous side streets overseen by varying municipalities with sometimes competing interests. The task of doing major repairs to this round-the-clock transportation corridor was daunting.

When Washington State Department of Transportation (WSDOT) decided that sections of the highway needed rehabilitation, it turned to Granite Construction to handle the task, including coordinating with the numerous agencies that would be affected by the rehab.

"This was a hugely complicated project," said Ed Kane, engineering manager of WSDOT in Snohomish and King counties. The $7.6 million project called for the replacement of deteriorating asphalt in two sections of the interstate and bridge maintenance. "The work had to be done at night, which required a large amount of work to be accomplished in just a few hours before the road had to be reopened for traffic. Frequently the schedules called for one lane to be opened for a few hours, a second lane opened for fewer hours and a third lane on a different schedule. The team at Granite handled the coordination beautifully. It was a joy to work with them."

Early in the planning stages, Granite worked with WSDOT to bring in Washington State police to be positioned at the work zones. All parties agreed that the flashing lights would slow the night traffic and contribute to a safer work zone. The result of this and other safety efforts meant that workers completed 17,619 hours without injury during this night-paving project.

The job was begun in April 2019 and finished in October 2020, ahead of time. The first part of the project called for Granite to mill 2 mi. of the freeway and replace the worn asphalt with 2 in. of fresh asphalt. The second part of the project called for removal and replacement of asphalt at the intersection at 164th Street including the on- and off-ramps leading on to the overpass.

"Unsafe conditions like cracked asphalt and potholes were reasons for the project," said Cody Hookland, Granite's project engineer of the job. "When we finished all the paving work on I-5, we earned a bonus for smoothness, so that was an excellent result."

The overpass from 164th Street onto I-5 needed extensive work on a tight schedule. 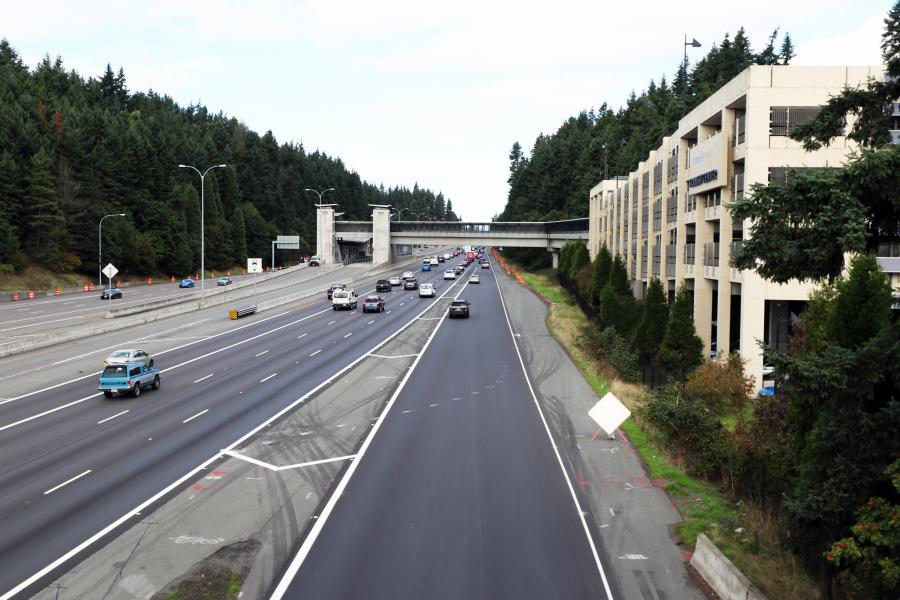 "This is a major thoroughfare for work and business, so we need to get the transition joints in the bridge installed for a smooth ride for drivers that would be using it the next day." Hookland said.

In addition to the bridgework, the Granite team replaced sidewalk ramps to make the street ADA accessible.

"The added work and restricted work hours make it challenging but we maintained our schedule," said Hookland.

The Granite team produced 18,850 tons of asphalt at its Smith Island facility in Everett and acquired the 3/8-in. aggregate from its Granite Falls aggregate facility. The asphalt pavement was Superpave, a hard, durable mix that WSDOT requires for most of its interstate roads. As a company, Granite is committed to incorporate recycling on its projects to conserve raw materials and energy. On this job, Granite ground up the old asphalt and incorporated it into the new road. Approximately 20 percent of the completed road was built from recycled materials.

In addition to the normal coordination between Granite, WSDOT and subcontractors, Granite had to account for the fact that two separate projects for the new light rail system intersected the work zone.

"Before each shift, the crew met to review safety plans and nightly work plans which covered what we planned to get done and how we were going to do it," said Hookland. "Clearly defining the haul routes for trucks bringing in fresh asphalt and removing the old ensured that everyone knew what was happening and when. Planning our work and following that plan helps to get everyone home safely at the end of the shift.

"Even with all of our preparations we encountered a few hurdles," said Hookland. "Addressing last-minute requests from the other two projects that overlapped with ours sometimes resulted in unexpected lane closures and rerouting our large paving equipment. Our daily meetings allowed our teams to tackle these challenges quickly and safely." 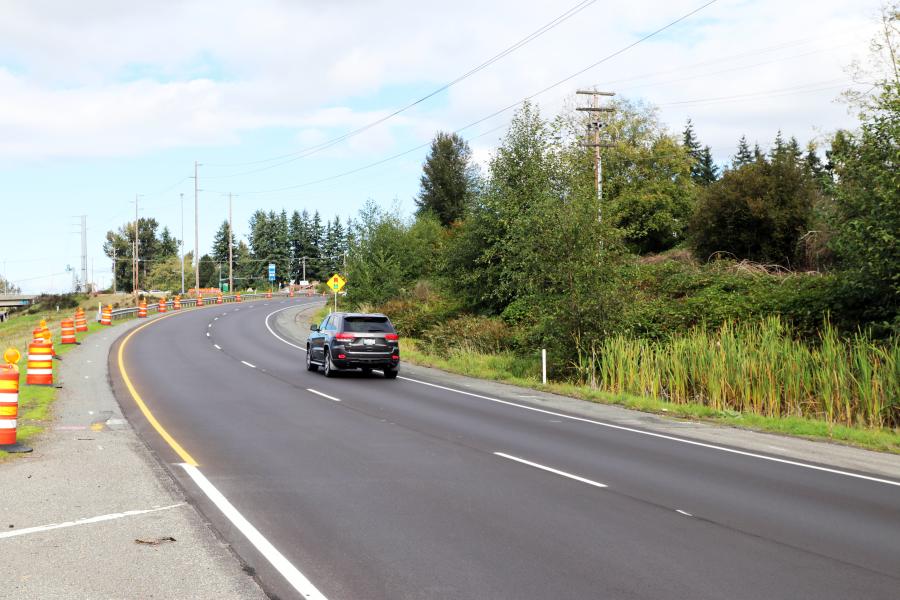 Another unique aspect of the project was handling the vehicles and passenger traffic poured from the Washington State Ferry at Edmonds. The ferry brings in traffic from the Kitsap and Olympic Peninsulas located across Puget Sound.

"The southern part of our project was at SR 104, which leads to I-5. This is where much of the ferry traffic would be entering the traffic flow. It was a heavily trafficked area, so we had to make sure our work was completed on time each day so as not to impact these commuters," said Hookland.

Project Manager Beth Duffus of Granite has been working on paving projects for 13 years and sees this project as a highlight.

"There were so many things going on at once, scheduling challenges, contingency plans, and of course the weather here can change so quickly. Our working relationship with WSDOT was also a highlight. Granite and WSDOT shared a project-first mentality when addressing challenges, which led to time and cost savings. When everyone is focused on getting the project done safely, on time and on budget, it makes a huge difference in the working relationship between the owner and the contractor.

"And finally, I was proud of the diversity of our crew. Twenty-two percent of our project team were women and seven percent were veterans. Tangible proof that we're making progress in Granite's commitment to inclusive diversity." CEG