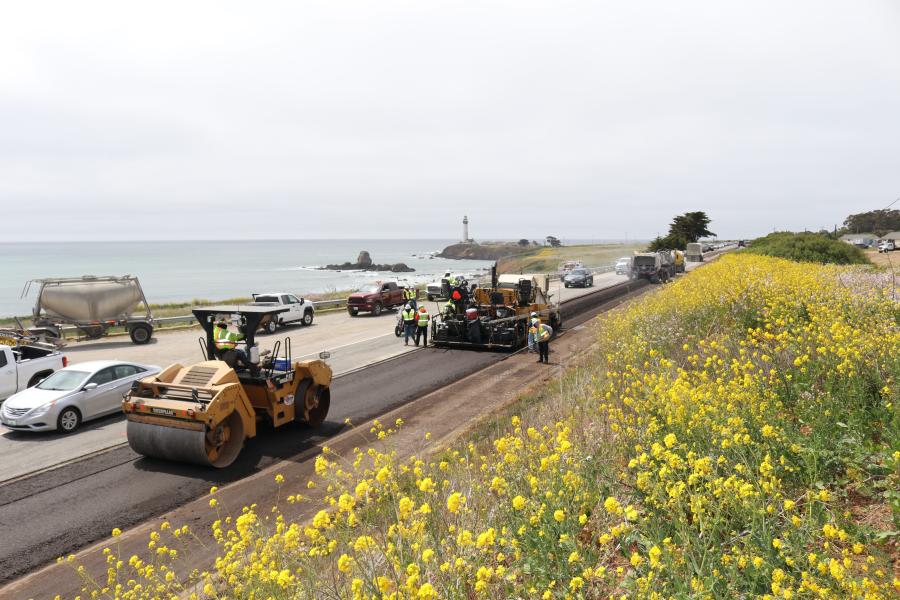 A Wirtgen 3800 CR and a Cat CB64 vibratory asphalt compactor were instrumental pieces of equipment for Graniterock as it performed cold-in-place recycling to rehabilitate a 10.6-mi. stretch of pavement on scenic Highway 1 between Santa Cruz and Pescadero.

As Pacific Ocean waves crashed in the background under sunny skies, Graniterock crews of Watsonville, Calif., enjoyed a picturesque day of work as they labored on an asphalt recycling pilot project with Caltrans.

Graniterock partnered with Caltrans to use cold-in-place recycling to rehabilitate a 10.6-mi. stretch of pavement on scenic Highway 1 between Santa Cruz and Pescadero.

The project piloted Cold In-Place Recycling to see how Caltrans and paving companies in the state could continue to refine their recycling practices to benefit California taxpayers and the travelling public. 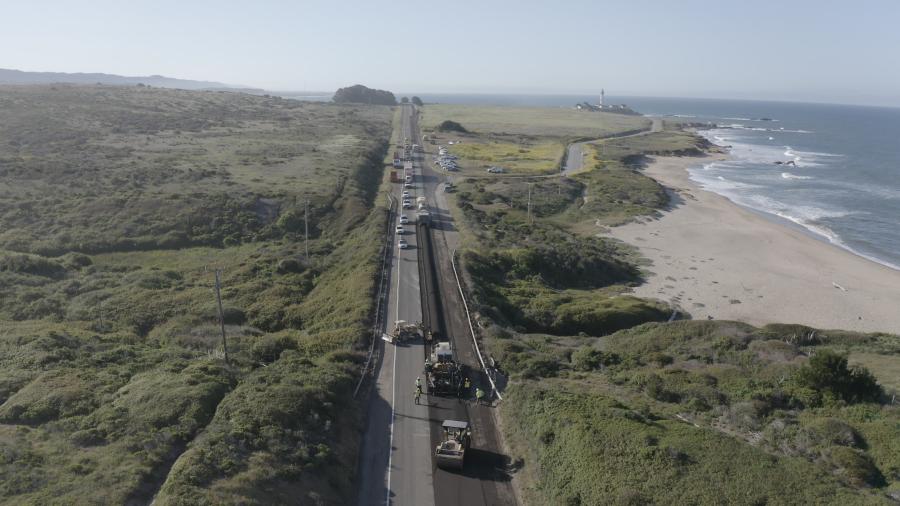 Recycling is common in road building across the nation. Asphalt is the most widely recycled material in the world by a wide margin, commonly called Recycled Asphalt Product (RAP), with concrete being another leader. On conventional "mill and fill" jobs, contractors use an asphalt milling machine to grind the top 3-to-4 in. of asphalt that has deteriorated, load it into a truck, haul it to a landfill or recycle facility where it can be processed and incorporated back into hot mix asphalt (HMA). Typical HMA usually incorporates a small percentage of RAP into the new mix, around 15 percent.

Concrete is often crushed on site and used as new subgrade or to reinforce the existing subgrade. In both asphalt pavement design and concrete pavement design, Caltrans works diligently with the industry to preserve the state's limited aggregate resources while simultaneously increasing use of recycled aggregate with the intention of lowering costs and reducing environmental impacts. Annually, the U.S. uses approximately 1.3 billion tons of aggregate, with more than half of that in road construction. Virgin aggregate mined from quarries is used for approximately 90 percent of road construction.

The pilot part of the Caltrans-Graniterock project was to test the usefulness of cold in place recycling (CIR), a 100 percent recycled asphalt product. Would CIR be as effective as a standard recycling practice of trucking the used asphalt back to an asphalt plant for reconditioning?

If the old asphalt can be recycled on site through CIR, then the state would save the cost of trucking the materials back to the asphalt plant or disposal site. This would save fuel and result in fewer greenhouse gas emissions. It would also mean less traffic congestion in and around the work zone.

Of course, not every road rehabilitation project is suitable for CIR, but Caltrans is looking to expand its use. Graniterock was an ideal partner in the pilot project.

"As one of the leading industry members, we work with Caltrans to develop new specs and new technologies that will benefit the state, motorists and us as contractors," said Dennis McElroy, recycling group manager of Graniterock. "The industry has been doing in-place recycling projects with the state since 2004. We have worked with the UC Davis Pavement Research Center to verify the performance of these materials for many years and we're now at the point of major adoption and utilization of these recycling strategies. Rolling out new technologies just takes time in the public sector and over the last 10 plus years we've been able to show that in-place recycling works."

Graniterock completed the in-place recycling portion of the pilot project on Highway 1 in 13 days during 2021, processing approximately 33,000 tons of the existing pavement. McElroy estimates approximately 1,800 truck trips were eliminated by using this strategy. 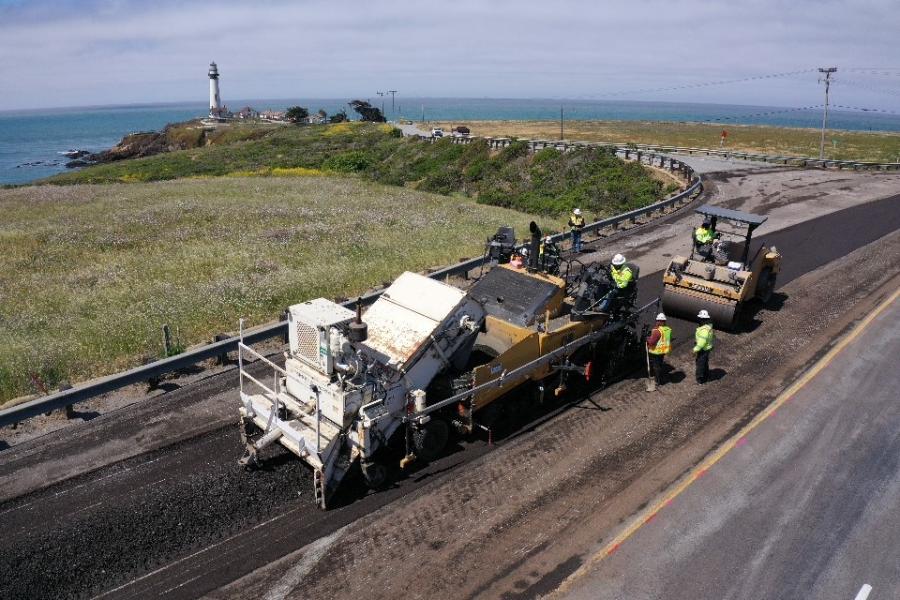 "We used an in-place recycling machine from Wirtgen with a 12-foot-wide cutting drum that operates in a downward motion tearing into the pavement 3 to 6 inches deep to pulverize and treat the old road," said McElroy. "We injected a new binder, standard PG 64-10, converted into foamed asphalt through the computer-controlled injection system, some cement chemical additive and then laid down the new recycled asphalt structure right back down again without the use of trucks. The traveling public was able to drive on it by the end of the day. A couple of days later, we came back and put the new overlay wearing course on the top."

The overlay included rubberized HMA. McElroy said the state wants to use the rubber mix whenever practical. Not only does it reuse old tires, but rubber helps produce a quieter pavement.

In 2021, the Graniterock team used in-place recycling to rehabilitate more than 100 lane miles throughout the state for a variety of different owners including cities, counties, Caltrans and private owners.

Their preferred equipment was the Wirtgen 3800 CR, which utilized a foam injection bar that pressurized the hot oil creating a foamed asphalt. This material bonded quickly with the RAP and created a recycled asphalt surface that was compacted with a roller and ready to support traffic soon afterward.

A cement spreader led the recycling train, using a 1 percent chemical additive as a mineral filler. An oil tanker carried the binder, injecting it through nozzles in the mixing chamber on the recycling machine. The recycled material was deposited on the road then scooped into a Cat paver.

Caltrans normally allows 15 percent of RAP in the surface layer designed as the primary wearing surface for traffic.

"The testing we have done and shared with Caltrans shows a considerable cost savings with the cold-in-place approach reaching nearly $7 million," said McElroy. "Using CIR on projects typically results in a cost savings of between 20 to 35 percent over traditional pavement repair methods."

Other strategies already in place include full-depth reclamation and cold central plant recycling. Full-depth reclamation occurs when a road has outlived it useful life cycle and needs to be completely rehabilitated. In this process, the entire pavement structure is pulverized, a chemical additive such as cement or lime is blended with the material and then the road is recompacted creating a 100 percent new structural section. Greenhouse gas emissions and cost savings on full-depth reclamation are typically greater than that of CIR and has become a common pavement rehab tool for owners.

Cold central plant recycling (CCPR) uses the RAP from a project, the material is stockpiled at a central location usually within the project limits, is treated and immediately laid back down again much like the CIR process. Caltrans and industry have been working on a new specification for CCPR, which is expected to be ready for pilot projects early 2022.

Graniterock works mostly in the San Francisco Bay Area and northern California, where traffic is some of the heaviest in the nation. McElroy anticipates in-place recycling strategies will be used more frequently in the coming years, and will continue to see efficiency improvements on how contractors and owners approach pavement rehabilitation.

He recommends owners take advantage of pavement preservation treatment methods such as slurry seals and chip seals to prolong the life of new pavement sections on 2-to-5-year cycles, which stretches the pavement life and prolongs the big problems, which require expensive fixes.

"Many of the roads in our area were built over 20 years ago and now, with increased population, can't handle the increased traffic loading that they were not designed for. The pavements are failing faster. We can increase the structural capacity of these roads by utilizing in-place recycling strategies such as CIR, FDR and CCPR. In a sense we are using the existing roadway structure, which is now underbuilt to increase structural capacity for the future which saves public and private owners a substantial amount of dollars compared to the old remove and replace way of doing things. Reusing what the owner bought and paid for 20 years ago just makes sense."

Caltrans, Graniterock, UC Davis Pavement Research Center and other companies are monitoring asphalt recycling projects being completed in other parts of the United States.

"The Virginia DOT and other groups around the United States are doing some exciting work," said McElroy. "We are doing our best to learn from one another nationwide so we can get the best results for our roads throughout the country."

Of course, the improved recycling practices benefit individual companies like Graniterock. "We are passionate about sustainability, and this helps us preserve our own aggregate reserves," said McElroy. "It's important for us as a business to prolong our reserves so we can continue to operate as a business and serve our local community for many generations to come." CEG