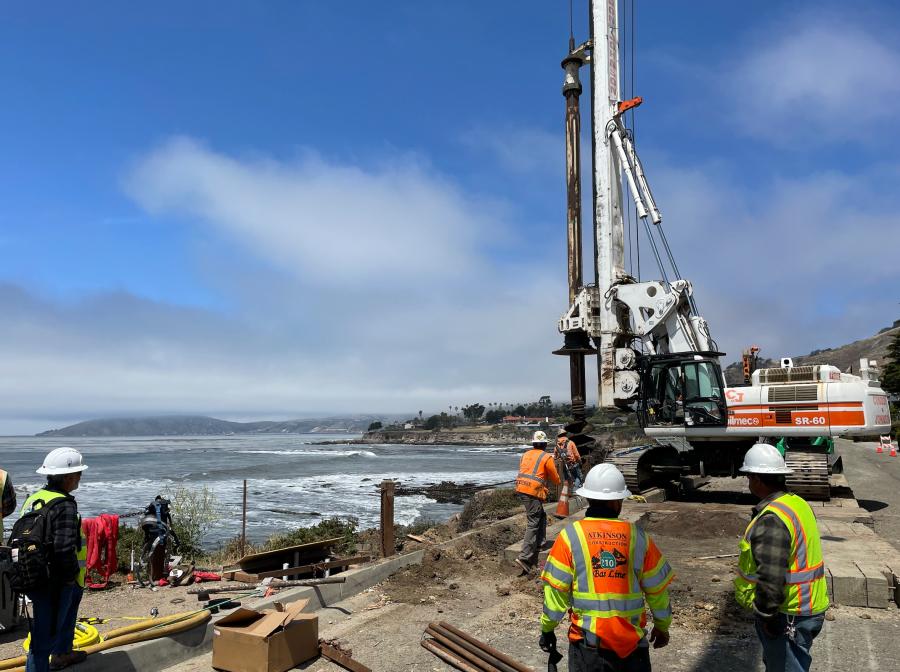 Granite Construction solved two problems in Encinitas by building a new sea wall at Pismo Beach to prevent erosion and flooding, as well as constructing a new rail undercrossing near El Portal Street, which now provides Californians with a safe and legal way to cross over the train tracks. (Photo courtesy of Granite Construction)

Granite Construction is finishing two unusual projects this summer that showcase its engineering and construction chops. Both projects will provide safer access to locals as they access California's most prized possession — beaches.

Some beaches have tricky obstacles that make access difficult. In Encinitas, Calif., San Diego County, the obstacle was a busy railroad track. On Ocean Boulevard in Pismo Beach, a beach access was old wood stairs descending precarious rocks. The price for the two projects totaled $12.1 million.

At the Pismo Beach location, Mother Nature seems intent on reclaiming the sand and degrading the rocky bluff. Granite, however, had other ideas.

The city of Pismo Beach awarded a contract to Granite to build a sea wall where the bluff was eroding, replace the beach access stairs, replace an existing storm drainpipe and add a sidewalk for visitors. The beach is well known for its striking rock formations, kayak-friendly location and tide pools that entertain visitors.

Unique million-dollar homes cling to nearby bluffs overlooking the ocean, so the city is interested in strengthening the sea wall near these homes and maintaining the view. Granite took a step beyond just fulfilling the contract by choosing to bring in an artist to "sculpt" the concrete to blend with the rock in the existing bluff. 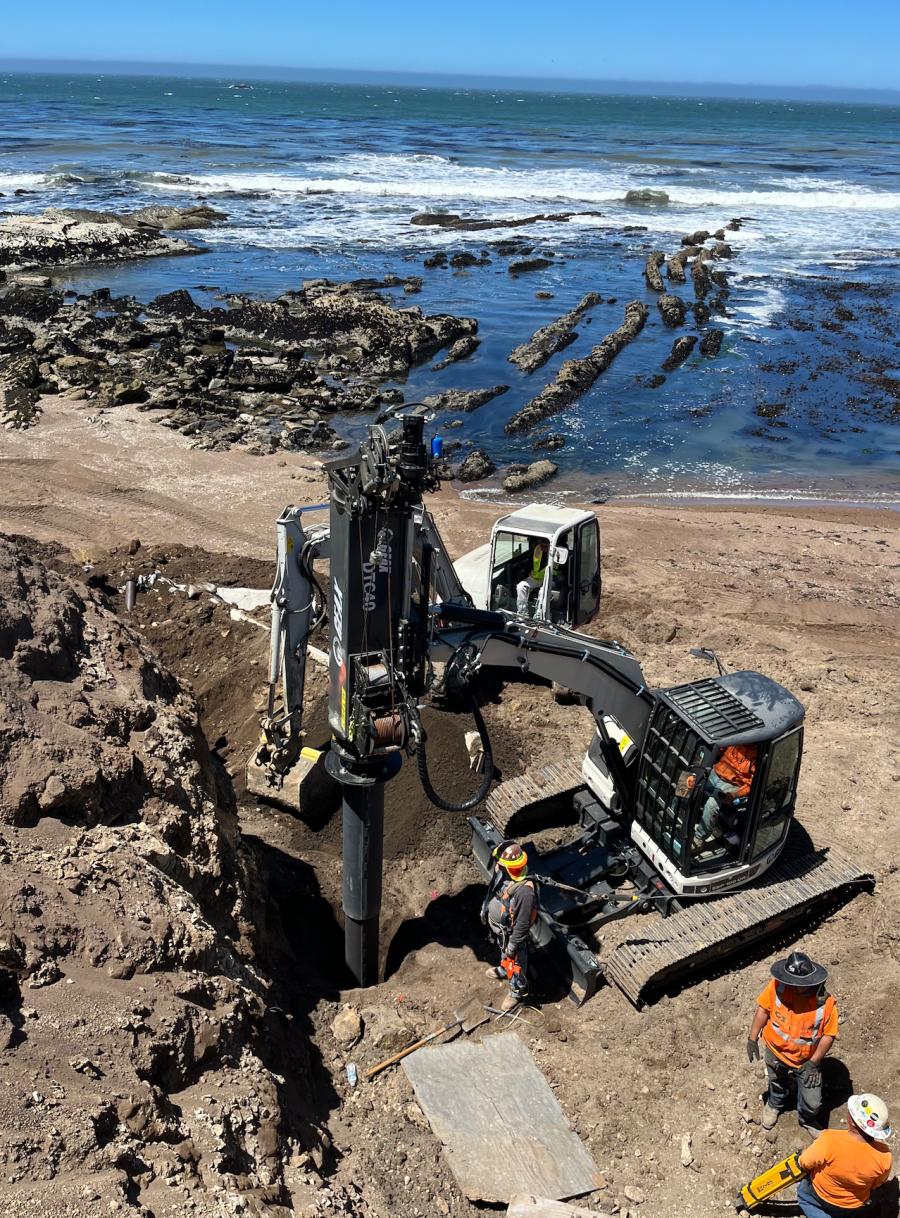 Granite subcontracted with Condon-Johnson & Associates Inc. (CJA) to drill the shafts, often called cast in drilled hole (CIDH) piles. Once the terrace deposits and rock were removed, workers inserted into the holes an epoxy coated steel reinforcing cage. This cage provides the structural capacity to the pile and the hole is then filled with concrete. There are 32 each 36-in. CIDH piles at 8 ft. on center for the main wall(s) and an additional 17 each 24-in. CIDH piles for the stairway and wall five.

While the concrete in the CIDH piles hardened, workers drilled holes between the piles, inserted strand anchors and placed cement grout into them forming concrete "nails" or tiebacks. Together with the CIDH piles and 18 in. structural shotcrete face, the tiebacks will hold the earth in place and prevent the bluffs from eroding any further.

"The concept of the job is to seamlessly blend the concrete work into the bluff," said Raymond Fassett, project manager of CJA. "It will not look like a common concrete wall but will be an architectural treatment that will look like rock. The final form will consist of five separate walls, then have a kick-out area where the stairwell will be built."

Designers gave special attention to the drainpipe that will deliver rainwater and other clean water to the beach. Granite had to dig out the old drainpipe and relocate it. Called a "periscope drain," the new drain will have a bend to slow the speed of the water, then feed into a 36-in. pipe that is encased in concrete. The pipe will be protected by temporary shoring shields, a smaller version of the protection that keeps earth from collapsing a culvert.

Safety considerations are vital with heavy drilling equipment perched on the side of a sea wall. Workers drilled micro piles to serve as outriggers for the crane to make sure it stayed in place. Many of the piles were a mere 5 ft. away from the edge of the bluff. Because some of the bluffs had eroded over the years, workers used temporary shoring to make it possible to insert the permanent piles.

"It's only fun when the job gets hard," joked Fassett.

Workers will use colored concrete in finishing the project ensuring that the sea wall will be not only practical, but also will blend in with the grandeur of the view of the Pacific Ocean.

Granite Construction used construction creativity to solve another beach problem in Southern California. This one is in Encinitas, Calif. where parents, teenagers and elementary school students often crossed railroad tracks that carry approximately 40 passenger and freight trains daily. These tracks have been an integral part of the community since before 1900.

People cross these tracks to reach the beach as well as restaurants, shopping areas and a farmer's market that operates on Sundays. 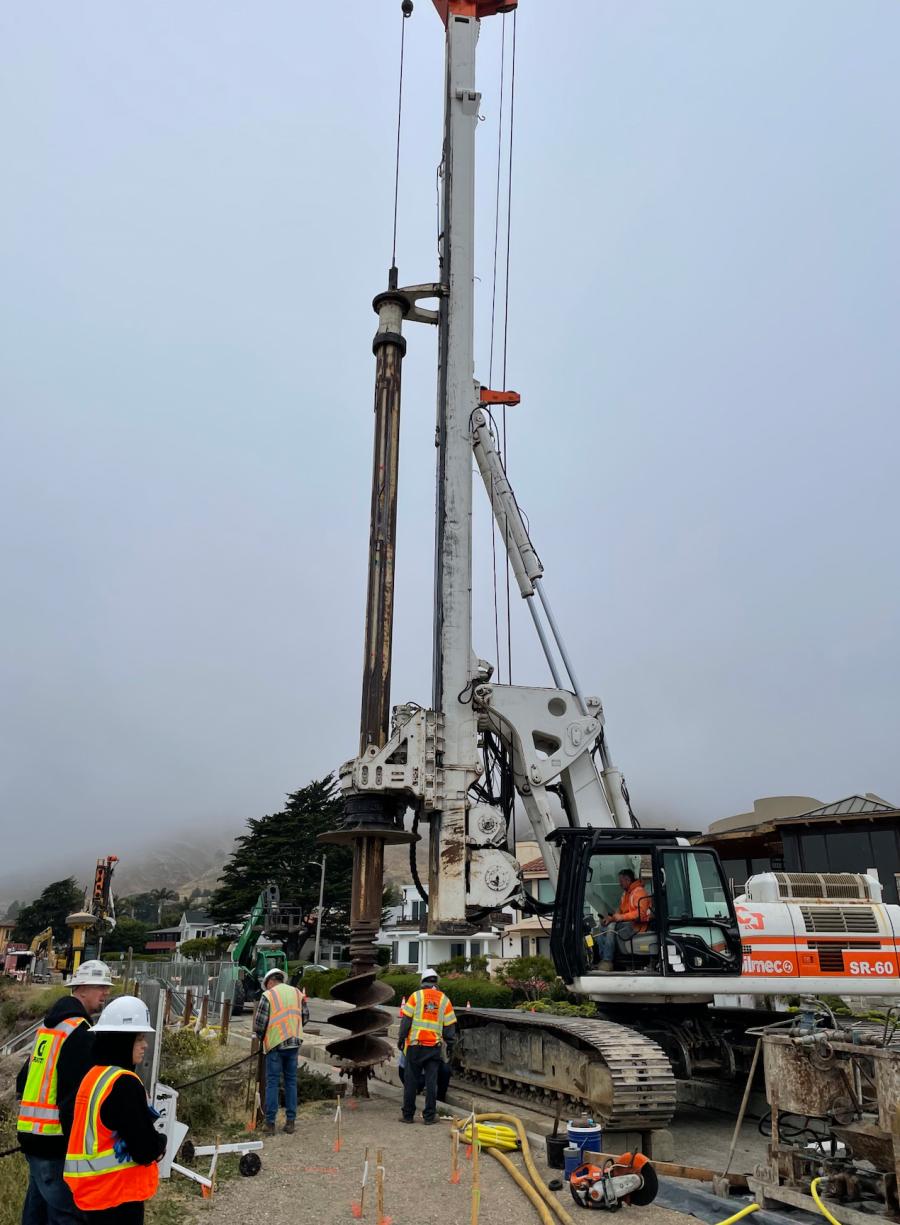 This dangerous trip will no longer be necessary with the completion of the El Portal Undercrossing in the summer of 2022. The city of Encinitas has been working with the San Diego Association of Governments (SANDAG) on building an inviting pathway underneath the tracks that will benefit shoppers, beachgoers, cyclists and diners. Many children attending Paul Ecke Central Elementary School on the east side of the tracks also will have a safer walk to school.

SANDAG led capital improvement projects on the North County Transit District's section of the LOSSAN railway in the County. SANDAG did the oversight for a similar undercrossing built in 2013 about 2 mi. south of the new El Portal Undercrossing.

Granite Construction was chosen to handle the construction for the project, including managing various subcontractors. The final aspects of the work required building permanent retaining walls to hold back the dirt from the trains and the new undercrossing.

"The job is engineering meets safety meets public art," said Rob Zappia, Granite's project manager of the final segment of the undertaking. "We are building the retaining walls for the city, which has an artistic vision for a unique appearance for the walls."

The city plans for an aesthetic look that will mimic a wood texture. The path that leads under the tracks will have a custom architectural finish, lighting fixtures and tile decorations created by local elementary school students.

A huge challenge for the job has been operating so closely to live railroad tracks. Unlike in a traditional highway project, workers could not divert the traffic onto an adjoining road. Although plan exists to add a second set of parallel tracks in the future that will carry traffic from Los Angeles to Mexico and back, the trains currently run on a single track. The new bridge built by Granite is designed to support the second set of tracks when it arrives.

"About 30 trains pass our job site each shift," said Zappia. "Generally, our people work for 20 minutes, then wait for 10 minutes for the train traffic. In a normal eight-hour workday, we have a five to five-and-a-half hour window to complete our work. We are not allowed to have any rigging within 25 feet of the outside rail while the train is coming or going. Safety inspectors want to make sure that there is no chance of ‘fouling the track.'"

The railroad carries Amtrack, Metrolink, North County Transit District traffic as well as freight. So, retaining walls and bridges must be sturdy to handle the weight and vibration resulting from the trains. As a part of this project, contractors will be installing guard rails to prevent foot traffic across the rails.

"The process went well," said Brittany Sattler, Granite engineer. "The soil was sandy, a Type C material, but it held in place as we had planned. We were able to pull the lagging and the H piles out then haul them to another location away from the work zone."

In addition to building the retaining walls, workers did grading for stairs leading to the undercrossing. A late addition to the plan was finalizing a temporary crosswalk that had proven popular during the construction.

The final phase of the work was built on the ambitious first steps of the El Portal Undercrossing that began in early 2021. Granite and partners, including Mahaffey Drilling, built the new railroad bridge of precast concrete supported on 16 piles each approximately 50-ft. deep. Workers welded into place bent caps on top of the piles to form the platform of the new bridge. Steel girders were used to further strengthen the structure and provide sufficient support to sustain the train traffic that would be traveling over the new bridge. Workers lined the bridge platform with waterproofing material to keep moisture from corroding the bridge in the future.

Train traffic was halted over three weekends in February 2021 so the workers could labor around the clock to accomplish these tasks. Once the bridge was rebuilt, workers returned the ballast and sub-ballast to the trackbed then rebuilt the tracks. The tracks were tested and trains rolling again by 5 a.m. each Monday. CEG