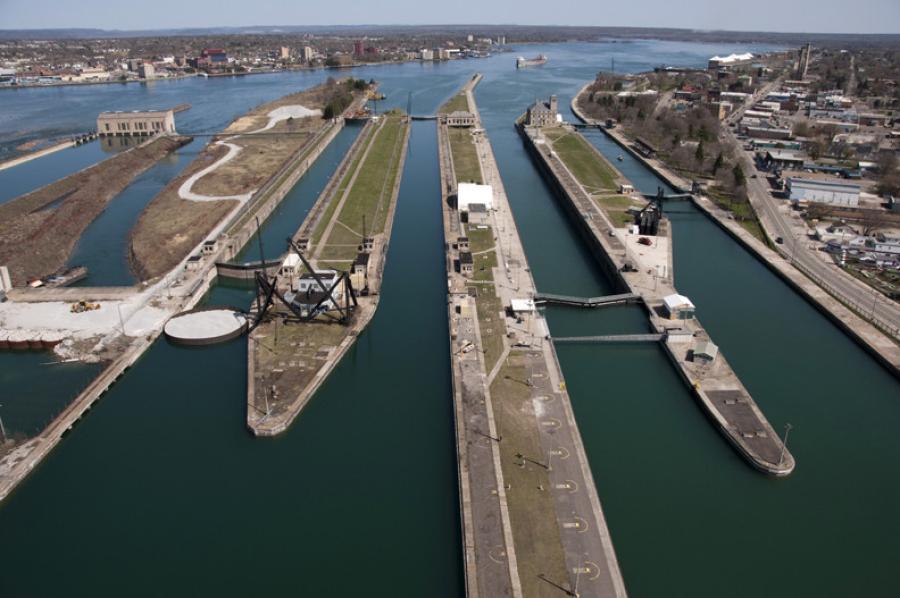 Officials from Great Lakes states are making a renewed push to win approval of a long stalled proposal for adding a new lock to the Soo Locks complex, a critical chokepoint that connects Lake Superior to the lower Great Lakes.

MINNEAPOLIS (AP) Officials from Great Lakes states are making a renewed push to win approval of a long stalled proposal for adding a new lock to the Soo Locks complex, a critical chokepoint that connects Lake Superior to the lower Great Lakes.

Only one of the two working locks there handles large iron ore boats. A Homeland Security study said an unplanned six-month closure of the Poe Lock due to an accident or terrorist attack would shut down much of the U.S. steel industry and that the economic shockwaves could cost 11 million jobs. That's more than the Great Recession. A Treasury Department report projects a net economic benefit of up to $1.7 billion from a new Soo Lock.

A look at some of the issues:

The Soo Locks at Sault Ste. Marie, Mich., carry all the shipping traffic between Lake Superior and the rest of the Great Lakes, including ships bound for the Atlantic Ocean — more than 10,000 one-way trips and about 80 million tons of cargo annually.

The cargo is mostly iron ore and coal, but also includes grain and even wind turbine blades. Boats longer than 730 ft. or wider than 75 ft., which account for 85 percent of the cargo passing through the locks, are too big for the MacArthur Lock. The big vulnerability is that nearly all iron ore mined in the United States goes through the locks on the way to steel mills elsewhere, mostly on boats that must use the Poe Lock instead.

The U.S. Army Corps of Engineers does not have an official price tag for a new lock, but similar projects have cost about $1 billion, said Lynn Rose, spokeswoman of the Corps' Detroit district.

A 2015 Department of Homeland Security study called the Poe Lock “the Achilles heel of the North American industrial economy.'

It concluded that an unexpected six-month closure of the lock would be “catastrophic' because of the disruption to the supply chain that extends from the iron mines of Minnesota and Michigan, to the steel mills of the Great Lakes region, onward to manufacturers that depend on steel — especially the automakers. It projected a $1.1 trillion loss in gross domestic product.

“Almost 11 million people in the United States and potentially millions more in Canada and Mexico would become unemployed due to the production stoppage, and the economy would enter a severe recession,' the report said. “There are no plans or solutions that could mitigate the damage to the manufacturing industries dependent on this supply chain.'

They won backing from the Great Lakes Commission. The commission, which includes officials from eight states and two provinces, recently held its annual meeting in Duluth.

The group's vice chairman, John Linc Stine, said there are reasons for hope because there's a growing consensus about the danger of economic vulnerability and the need for redundancy. But Stine, who's also commissioner of the Minnesota Pollution Control Agency, also acknowledged there's a lot of competition for federal infrastructure dollars.

Modernizing the Soo Locks made a Treasury Department-commissioned list last fall of 40 proposed projects that would have major economic significance. It projected the net economic benefit of rehabilitating the Poe Lock or adding another lock at $600 million to $1.7 billion.

The Poe Lock is nearly 50 years old while the MacArthur Lock is more than 70 years old. The report said closures of the Poe Lock are expected to increase.

But infrastructure “serves in silence,' Coda said. People don't think about it until something goes wrong, he said. Backers of a new lock are hoping they don't have to wait for a catastrophe.

“We can't wait until it breaks,"; Coda said.