Ground Breaks at Tower of Voices Memorial for Flight 93

The construction of the Tower of Voices will stretch 93 ft. tall with 40 wind chimes to pay tribute to the 40 passengers and crew members of United Flight 93. 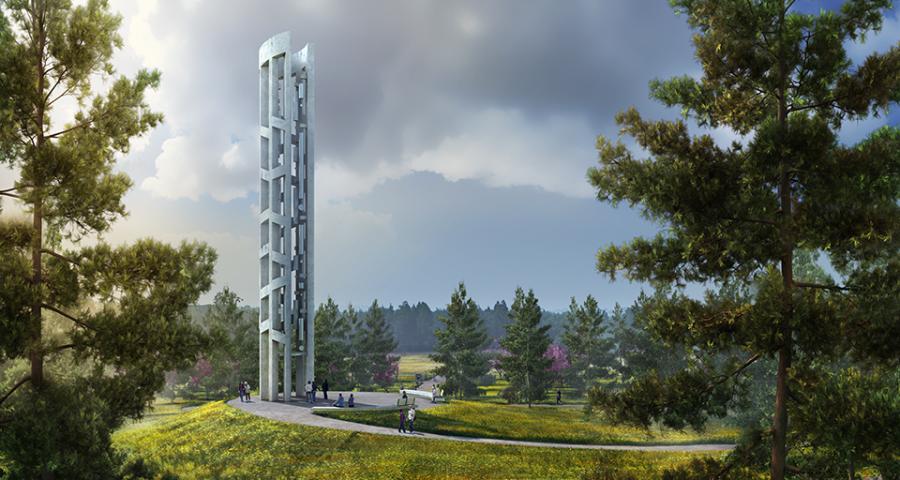 The construction of the Tower of Voices will stretch 93 ft. tall with 40 wind chimes to pay tribute to the 40 passengers and crew members of United Flight 93.

Flight 93 National Memorial broke ground during a “Soundbreaking” event Sept. 10 in conjunction with the Families and Friends of Flight 93 and the National Park Foundation.

The construction of the Tower of Voices in Shanksville, Pa., will stretch 93 ft. tall with 40 wind chimes to pay tribute to the 40 passengers and crew members of United Flight 93.

According to the National Parks Service, the cross section of the 93-ft.-tall tower will curve into a “C” shape to help the sound of the chimes reflect outward. The chimes themselves will hang starting at 20 ft. from the ground, right up to the top of the tower. The walls of the tower will be made of precast concrete segments, which will be put together with connectors.

The chimes will be created from aluminum tubes ranging from 8 to 16 in. in diameter and between five and ten feet long. The National Parks Service said chimes of this size and stature do not exist anywhere else in the world. The chimes themselves have been specially designed with a mathematically developed frequency range meant to create 40 unique tones “that can connote through consonance the serenity and nobility of the site while also through dissonance recalling the event that consecrated the site,” the National Parks Service said.

The Tower will be built on a concrete oval that has been placed atop a mound, raising it up from the surrounding landscape. Two curved concrete benches will face the tower's opening, and rings of white pines and other plants will surround the area, echoing the shape of sound waves that will come from the chimes.

The $6 million project will be funded with a grant from the National Park Foundation and will become a part of more than $40 million the Foundation raised for the construction, reforestation and design of the park's Memorial Plaza, Wall of Names, 40 Memorial Groves and Field of Honor. Construction will begin September 2017 and is expected to conclude by a dedication ceremony on Sept. 11, 2018.