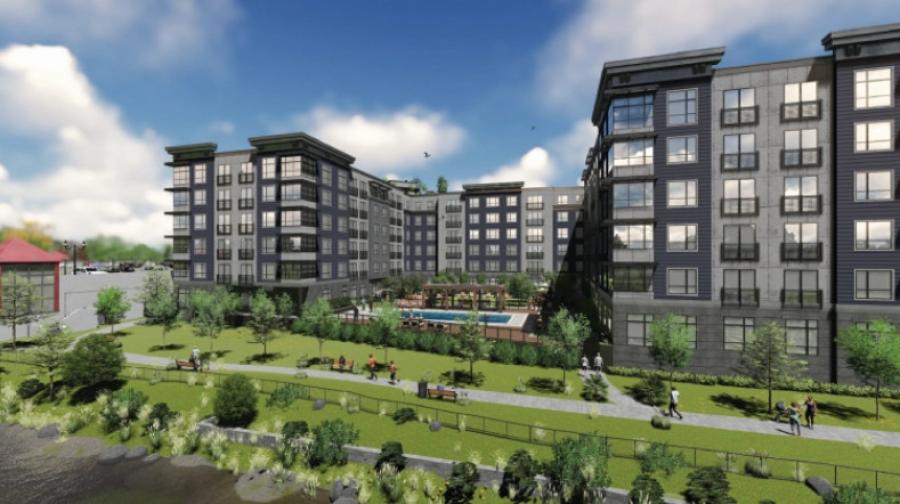 Sculptor Real Estate has provided $68 million in construction debt to a joint venture between Norwalk, Conn.-based Spinnaker Real Estate Partners and residential developer Eastpointe to fund the development of Canfield Park at Fairfield Metro, a luxury multifamily property in Bridgeport.

The property will comprise two mid-rise residential buildings, standing at five and six stories, and a 500-space parking garage. The financing for the project closed in late October.

Canfield Park at Fairfield Metro will sport studio, one- and two-bedroom residences that average 850 sq. ft., according to JLL, and there also will be 20,000 sq. ft. of amenities on-site. Its location will be next to the Fairfield Metro-North Railroad train stop, along the New Haven line, as well as Interstate 95, a major highway artery that stretches up and down the East Coast.

The developers have already broken ground on the project and hope to begin to deliver the 300-unit project to market in the first quarter of 2022, Spinnaker Chairman, CEO and Principal Clayton Fowler told Commercial Observer.

He said the five-story portion of the property will be the first to start leasing at the start of 2022, with the second, six-story portion expected to be delivered around four months later.

Chicago-based Jones Lang LaSalle's (JLL) Peter Rotchford was part of the commercial real estate services' team that sourced and arranged the debt on behalf of the borrowers.

"This project will be highly attractive to families transitioning to a more suburban lifestyle, as well as to empty nesters downsizing from large, single-family homes to modern rental properties," Rotchford said in a statement. "The Bridgeport market has seen a large influx of New York City residents since the beginning of the COVID-19 crisis, and this property is well-positioned to benefit from the shift in renter preferences."

Spinnaker will handle leasing and property management, while development will be spearheaded by Eastpointe, a development firm in Fairfield, Conn., led by Bryan Robik and Bill Finger, in what is a "true 50/50 joint venture," according to Fowler, who added that Finger has been a long-time partner of and investor in Spinnaker.

"We've been working to put this together for quite some time," Fowler said. "It was scheduled to close at the beginning of COVID, and it became a casualty. So, we've taken these last six to seven months to put Humpty Dumpty back together again, and we were able to do that."

He added that the most disappointing aspect of the process was that Spinnaker and Eastpointe were in "ready, set, go" mode prior to COVID, and then, their previous construction lender abruptly pulled out of the transaction following the onset of the pandemic.

Fowler said the joint venture's motivation for wanting to build the asset "still holds today," given the demand and its location along the commuter rail line.

"It's well-located and one can take advantage of what Fairfield has to offer," Fowler explained. "With folks having discovered that they don't have to live in New York City to still maintain a relationship with [it], [this construction] job is more favored now. We're very excited about putting it together."

Sculptor Real Estate is a fund vehicle managed by global asset manager Sculptor Capital Management, which has a U.S. office in New York.