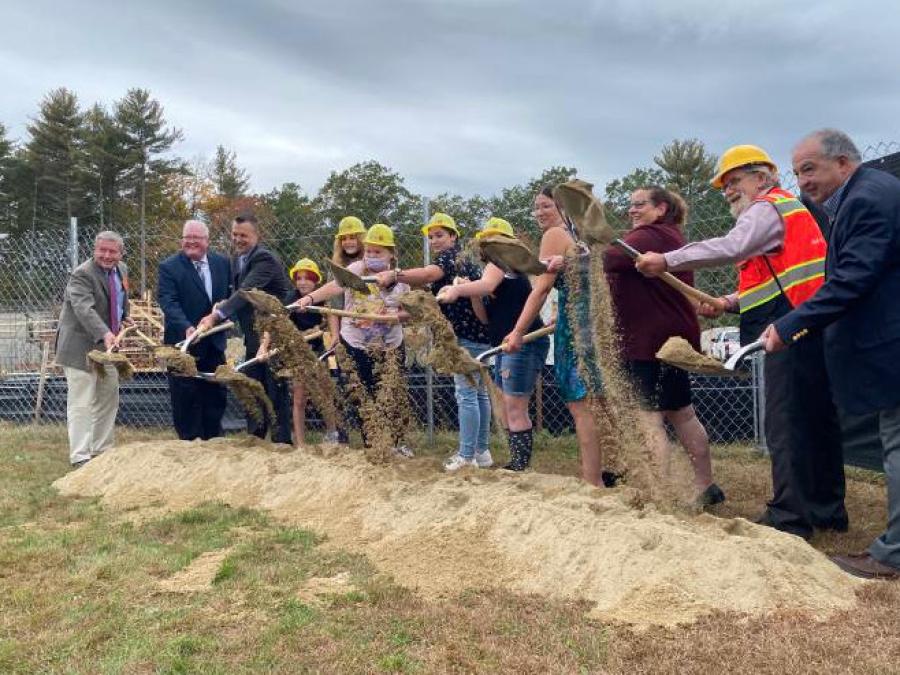 Several shovelfuls of dirt on Oct. 15 got construction of the new Fisher Hill Elementary School under way in Orange, Mass.

The school's students, staff and administrators all took part in the groundbreaking — although construction had already officially started — and celebrated the building of their new "shining star in the North Quabbin area."

Superintendent Elizabeth Teahan-Zielinski said the school — which is slated to be finished in 2023 — has been in the works for a long time and will be a bright spot for the community.

"For our town, the building will be a focal point, a community center," Teahan-Zielinski said to those in attendance, "where we can gather together for special events and celebrate the good work that you do, and our staff does every single day."

She added that the building shows Orange is dedicated to its elementary school students.

"This building represents a commitment to its residents and children," she remarked. "I'm confident this building will be completed on time and/or under budget."

The new Fisher Hill school is projected to cost a total of $57.6 million, the Athol Daily News reported, $45.7 million of which will go toward its construction. A grant from the state of Massachusetts will provide $33 million.

Plans call for a three-story, 50,000-sq.-ft. addition to be built onto Fisher Hill Elementary School, while nearby Dexter Park Innovation School will be demolished and students from both facilities will have room to learn within the expanded and renovated building.

The need to replace or repair the 1950s-built Dexter Park school has been apparent since at least 2006, when the Massachusetts School Building Authority (MSBA) designated it one of nine Category 4 school buildings in the state, due to problems with the school's boiler and heating system, a leaking roof and opaque windows, in addition to overcrowding.

Fisher Hill Principal Christopher Dodge said the groundbreaking represents the official start of the transition to a new, modern school.

"Today marks the official beginning of a journey that we're going to take together," he noted. "It's a sign that this community believes in you."

Dodge added that although current sixth-grade students will not be walking the halls of the new school, they too will benefit.

"It is the idea that we may not personally benefit from a new state-of-the-art building," he said. "We are a community and as a community, we afford opportunities to those that come after us."

Following his speech, several sixth-grade students stepped up to the podium to share their ideas for what the school should have, the Daily News reported.

"My hopes and dreams for the new school are to have a welcoming environment," said Meg Murray, "where everyone can find their way and to have a safe and clean space for children to enjoy and feel secure."

After the students spoke, they joined Dodge, Teahan-Zielinski and others with shovels to officially mark the beginning of construction.

Dodge said that the ceremony was a terrific way to incorporate the students into the ceremony.

"It's nice to celebrate with them because they're what it's all about," he told the Daily News after the groundbreaking. "[The students] haven't gotten the recognition they deserve. If nothing else, a new school will symbolize that they matter."

He added that the new school will improve the education of students and they are excited for it.

"It's bigger than the facility; it's a sign that education at the youngest level matters," Dodge said. "I don't think they know the impact it will have on them."

State Rep. Susannah Whipps, an Independent from Athol, said she is "completely excited" for the new facility to be built and added that investments into local schools benefit the town, even for those who are not directly involved.

"It's a good day," Teahan-Zielinski added, "and it'll be an even greater day when it's done."