With more than 100 years under its belt, New York’s C.P. Ward is one of the most experienced construction companies in the Northeast part of the United States. 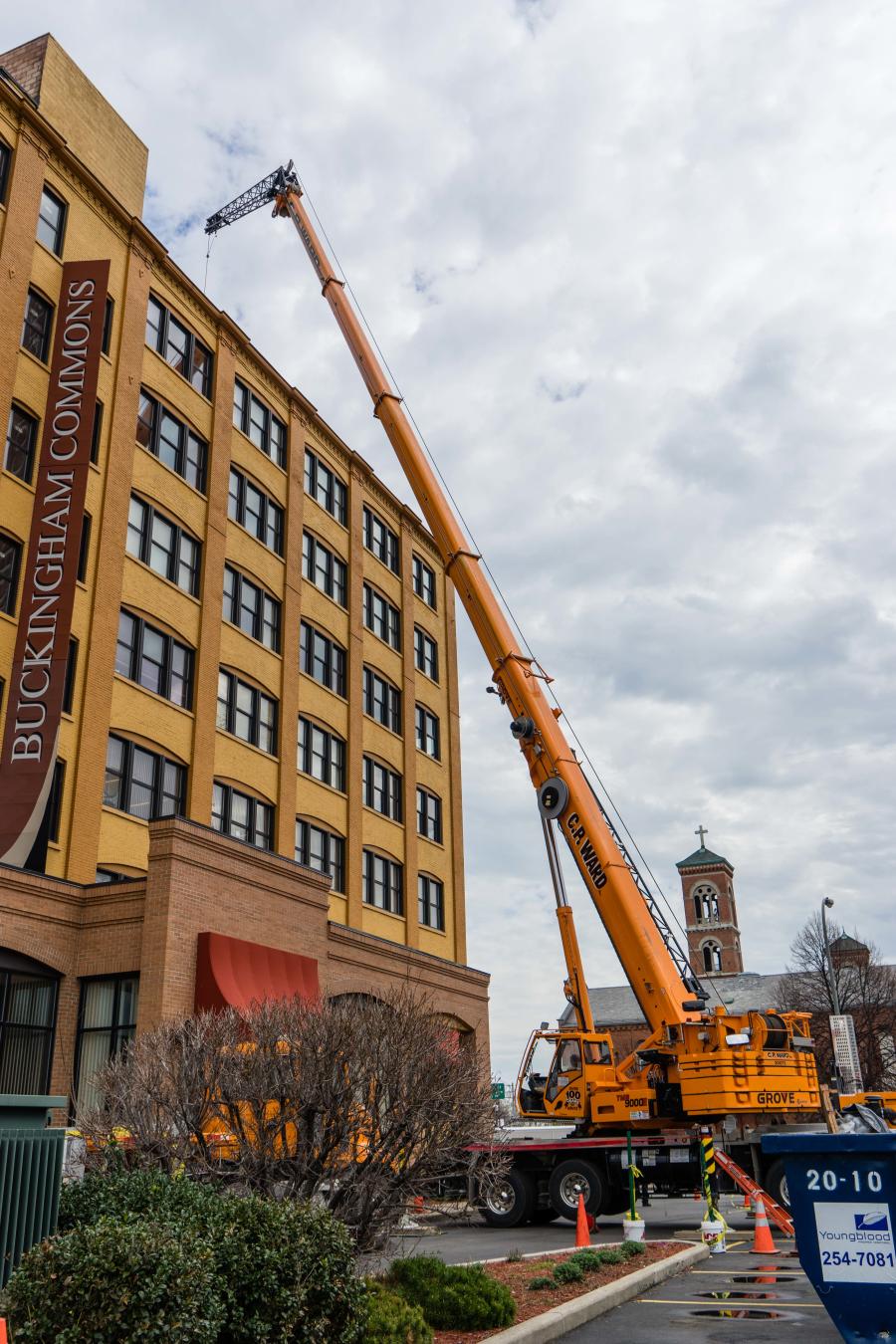 C.P. Ward uses a Grove TMS9000E specifically for projects that demand mobile cranes that can quickly get on and off the job site.

With more than 100 years under its belt, New York's C.P. Ward is one of the most experienced construction companies in the Northeast part of the United States. Many of the services the company provides demand mobile cranes that can quickly get on and off the job site, such as steel erection, cell tower erections and HVAC (heating, ventilation and air conditioning) projects.

In the summer of 2015, the company took delivery of a new Grove TMS9000E specifically for these types of projects. It needed a crane solution that could provide quick transport, setup and maneuverability both on and off the job site. Having used the 110 ton truck-mounted crane on a variety of sites, C.P. Ward reported great success.

Jon Lanse, operations manager of the company's crane/rigging division, said the TMS9000E has enabled the company to complete a wide range of projects, all needing just one worker at the helm.

“The TMS9000E is a great one-man machine. We can have the same person drive the crane to the job site, set it up for lifts and then act as its operator. The self-loading counterweight system is extremely efficient and has significantly increased our return on investment when compared with the cranes we used to use in the 100 ton class. It's a real bang-for-your-buck crane.”

Examples of projects completed with the crane include HVAC replacements, setting steel and formwork for construction projects and culvert replacement, among others. Lanse said the company makes great use of the crane's hydraulic luffing jib for these types of projects, adding that it gets used at least once a week. In essence, C.P. Ward uses the TMS9000E as a taxi crane, but with a stronger load chart and hydraulic luffing jib that such solutions typically don't possess.

On a recent project to install cell phone towers, Lanse said the crane's maneuverability and reach capability enabled the company to complete a job it otherwise couldn't have handled.

“For this particular project up in Buffalo, New York, I was putting up cell phone towers with the crane. There wasn't much room to work in — I had to set up the crane inside of a fenced-in compound,” he explained. “The TMS9000E enabled me to maneuver into this area and still have enough reach with its 142 foot boom to lift to the top of the towers. And even with this kind of position, the crane had a strong enough load chart to make the lifts. It performed flawlessly.”

“With the remote control system we can swing the boom and the luffing jib in place for pinning on the boom,” he said. “The operator is on the ground watching and making all of the connections. This really makes the TMS9000E a one-man machine. We don't need two workers to head out with the crane to complete a simple job.”

C.P. Ward purchased the crane from Stephenson Equipment, with which the company has had a relationship for several years. Lanse said he studied the load charts of several cranes in the weight class before choosing the TMS9000E.

Stephenson Equipment has been providing sales and rentals of construction equipment, paving machinery and cranes since 1957. Headquartered in Harrisburg, Pa., the company serves customers from six locations across its home state and New York. Stephenson Equipment is an official dealer of Manitowoc, Grove, National Crane boom trucks and Potain tower cranes.

“I'm a big Grove fan,” Lanse said. “The cranes we have from Grove are the best in the market and give us the best bang for our buck. We get great service and parts support from Stephenson.”

C.P. Ward's headquarters is in Scottsville, N.Y., and the company also has a branch in Montour Falls, N.Y.