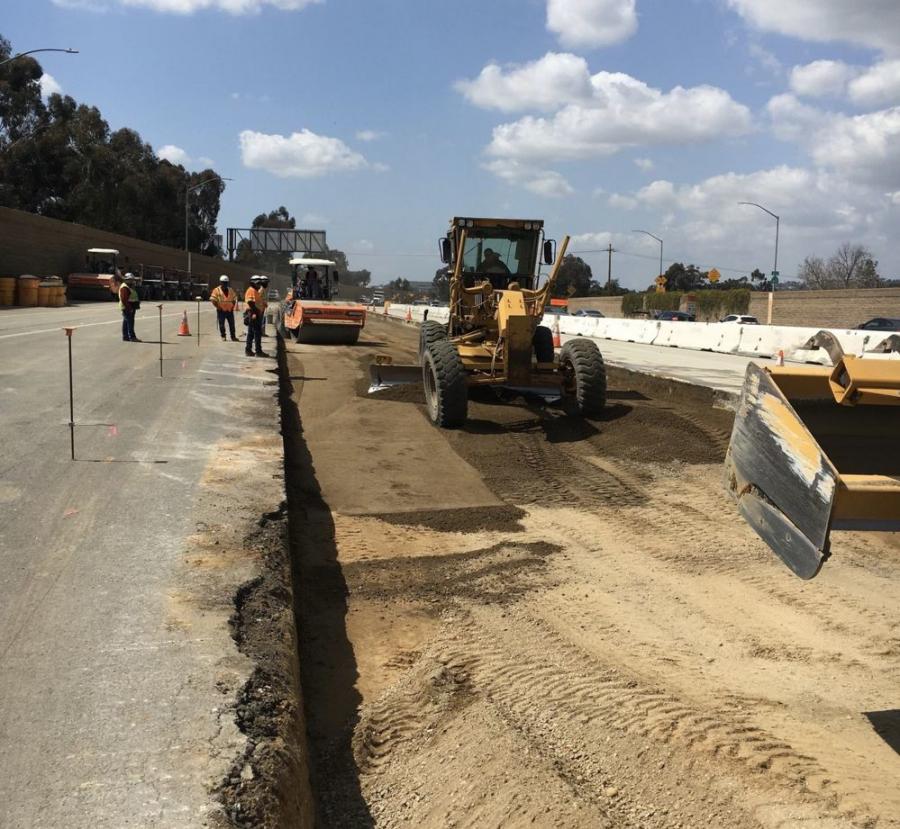 Crews from Guy F. Atkinson are executing a $107 million upgrade to the Pomona Freeway (SR 60) between the I-710 Long Beach and San Gabriel River (I-605) freeways to extend the lifespan of the highway.

Crews from Guy F. Atkinson are upgrading approximately 10 mi. of the  Pomona Freeway (SR 60) between the I-710 Long Beach (I-710) and San Gabriel River (I-605) freeways to extend the lifespan of the highway.

The $107 million initiative, financed by state and federal funds and being overseen by the California Department of Transportation, started in the summer of 2019 and should be completed in the winter of 2024/2025.

"This project is to restore the roadway and improve the ride quality by rehabilitating the existing lanes with pavement that will extend the life of the roadway a minimum of 40 years, only requiring minimal maintenance by Caltrans once completed," said Peter Jones, Caltrans spokesperson of District 7. "SR 60 is a major thoroughfare serving commuters between Los Angeles, San Bernardino and Riverside counties. As a result of heavy use, it is being rehabilitated in both directions."

The work includes the placement of concrete and asphalt pavement; safety improvements; the installation of new guardrail systems, new lights and sign structures; and improvements to pedestrian ramps. 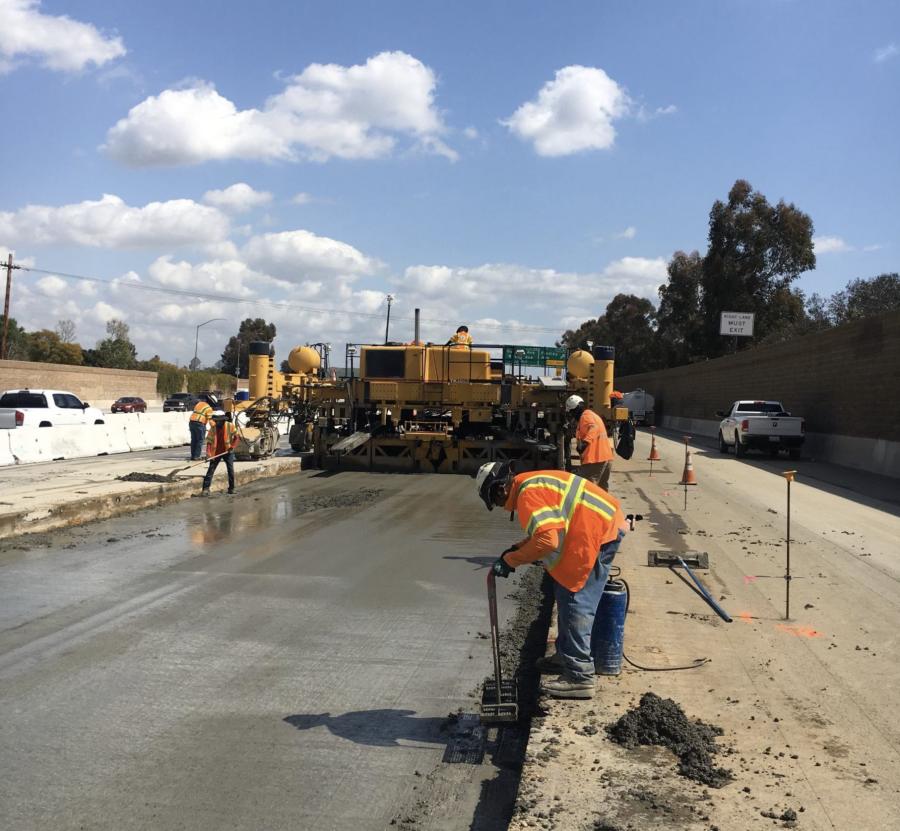 Atkinson crews have been hard at work, meeting benchmarks and overcoming challenges. The 2021 construction season is focusing on improving safety and visibility.

"Work is moving smoothly with concurrent operations on a nightly basis throughout the project," said the Guy F. Atkinson team. "Traffic control, vandalism of traffic control items and homeless encampments are some of the challenges facing the crews. The presence of the CHP units are effective in mitigating the challenges of public traffic incidents and homeless encampment and deterring vandalism."

Excavation is focusing on the roadways and for the new drainage structures, as well as for new sign structure and new bridge approach slabs. Crews are upgrading and replacing concrete and asphalt paving.

"The Class III aggregate base was recycled from the excavated existing concrete" said Sepand Minovi, Caltrans resident engineer. "This is not only beneficial to reducing our environmental footprint, but a cost savings to the contractor."

Peak days thus far have many Guy F. Atkinson Construction and subcontractor personnel on-site. The major subcontractors are RV Concrete for replacement of individual slab replacements and bridge approach slabs; BC Traffic Specialist for traffic control, removal and installation of new overhead signs and sign structures, temporary and permanent striping and roadside signs; All American Asphalt Co. for paving the ramp and shoulders with hot mix asphalt concrete;  Cooper Engineering for concrete median barrier; RE Mason for grinding new and existing pavement for smoothness; and  Sierra Landscape for irrigation and planting.

"The main wear and tear issues are tires and hydraulic issues," said  a representative  with Guy F. Atkinson. "Even though on-site mechanics are provided, routine maintenance is key to stay organized and communication is also key for quick repairs." 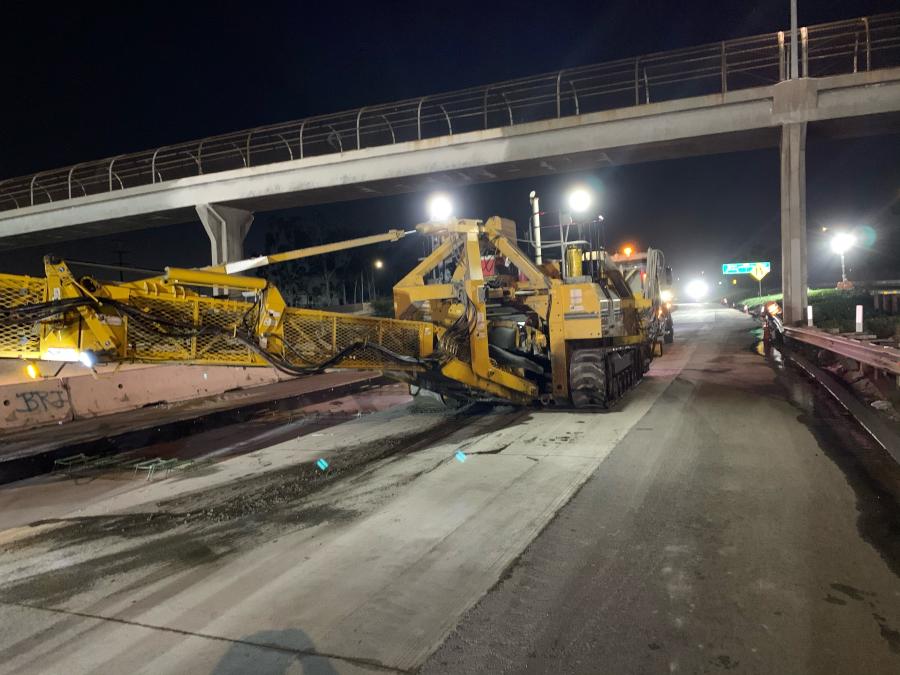 In addition, electrical and fiber optic communication lines are being removed and replaced.

In terms of bridge work, new approach slabs are being installed.

In the Southern California area, Atkinson purchases and rents equipment from BC Rentals.

The work, which is being done nightly from Mondays to Saturdays (8 p.m. to 6 a.m.), is being enhanced by a series of 55-hour closures between Friday at 10 p.m. and Monday at 6 a.m., which has crews from working round-the clock to maximize their efforts.

"The cracked slabs, corner breaks and continued deterioration of the pavement has severely impacted the ride quality of the existing roadway," stated the project web page. 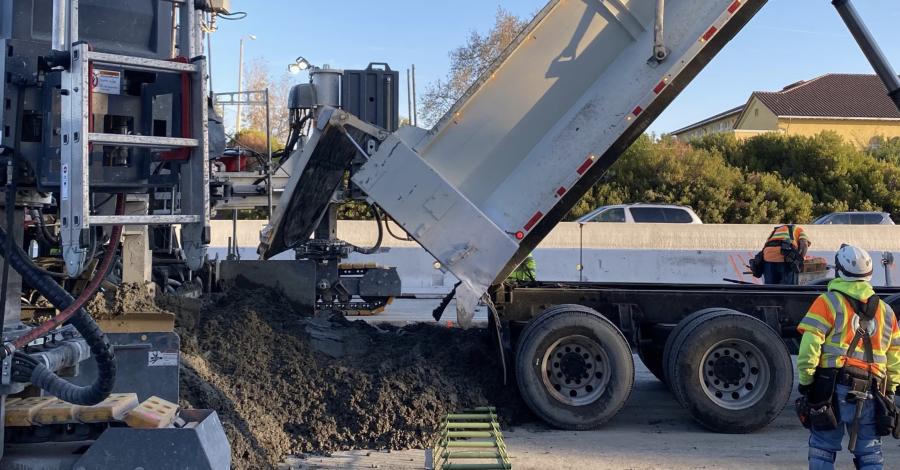 A Caltrans design team designed the infrastructure upgrade for the stretch of SR 60  (which has five lanes in each direction) that was built in the mid- to late 1960s and carries a large amount commuter and commercial traffic daily.

"Replacing pavement while providing the same existing number of lanes to public at the same time [was a challenge]," said Minovi. "Standard construction equipment and material was used, but strategic staging to increase productivity was key."

The weekend closures are being implemented to minimize overall traffic impacts.

"Although not a full freeway closure, motorists should expect delays and are strongly advised to use alternate routes," stated the project web page. "Residents and local businesses located near the freeway may experience noise, vibrations and dust associated with construction activities."

"At times, California Highway Patrol [CHP] units were not available due to the pandemic or occupied with protesting sites," said Minovi. "Caltrans Construction reached out to other CHP offices outside of our area with positive response and they provided our detailed requests. Some of the challenges of night work are people driving under influence, speeding and traffic incidents, which causes delays and safety issues. During the extended weekend closures, K-rail concrete barrier is used to separate the construction crew from traffic. The contractor is very experienced working on Caltrans projects, which resonate to issues being resolved quickly." 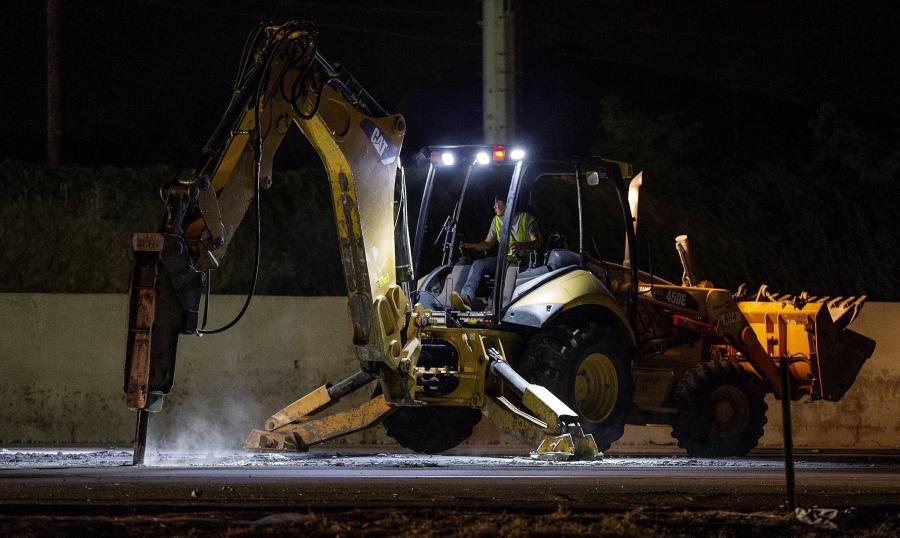 The safety of construction personnel is paramount.

"Lowering the speed limit within the job site is crucial," said Minovi. "Traffic control is placed on nightly basis, with CHP units present at the job site and performing speed reducing rounds every hour. There is at least a 6-foot buffer between workers and live traffic."

Atkinson and Caltrans project teams have formed a solid partnership.

"The main objective of the project team is teamwork and collaboration, flexibility and managing uncertainty and thoroughness," said Minovi, "by ensuring the construction completion on time and within budget, in compliance with project plans and specifications and by serving the best the interests of the public. The crews are extremely experienced, which makes for a quick paving operation." CEG