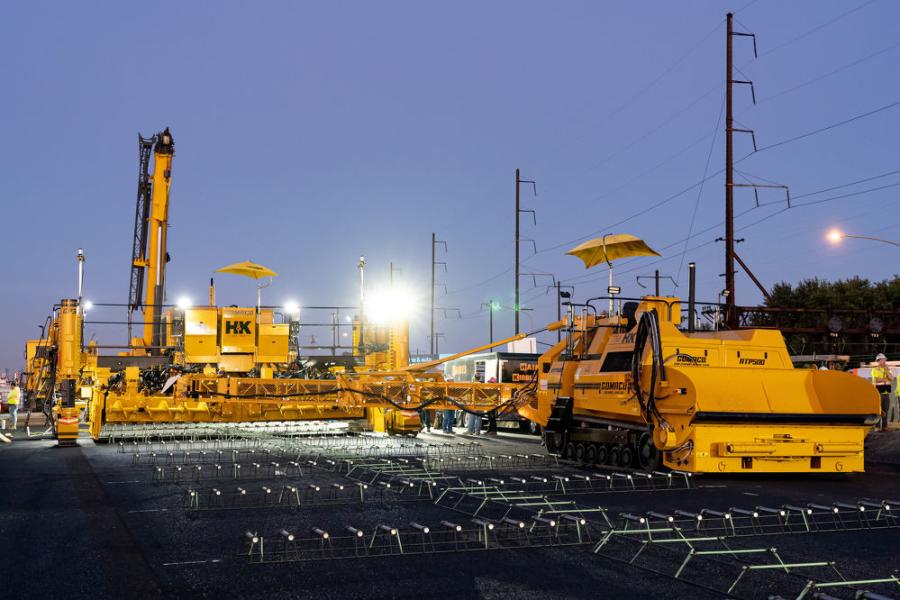 The GOMACO paving spread is staged and ready for the first pour to begin on the morning of Sept. 20, 2021.

The purchase of this equipment marks a historical moment for H&K, as it is the first time the company will be self-performing concrete paving. This move also has allowed H&K to become more competitive in the heavy highway and transportation sectors. The machinery was placed into service by Haines & Kibblehouse, Inc. (H&K, Inc.), the Philadelphia, Pa.-based division of H&K. 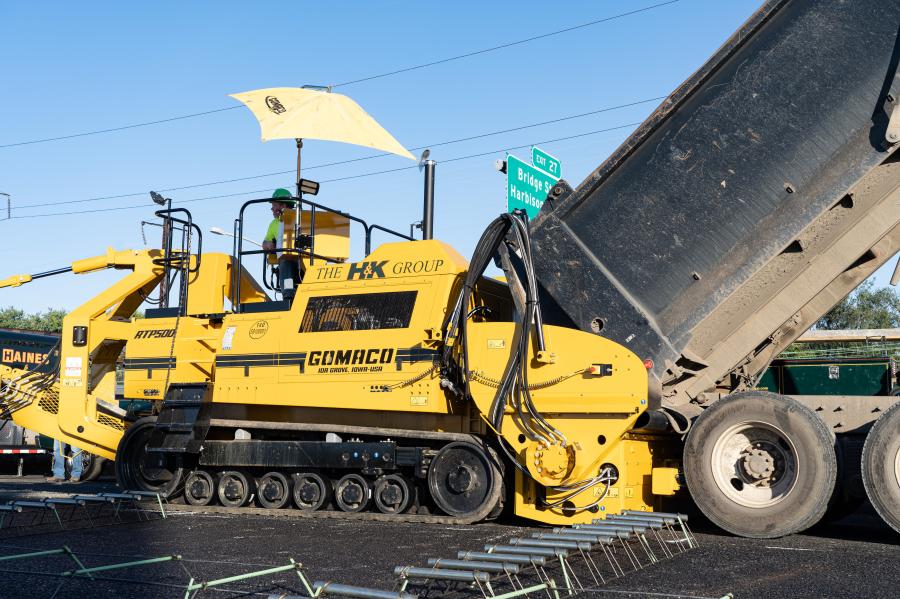 The RTP-500 is equipped with a hopper, similar to that of a paver, which then feeds a conveyor that places the concrete in front of the GP3 slipform paver.

The machine travels up to 7 mph with an operating speed of 110 ft. per minute. It is a track-powered machine (the tracks are 19 in. wide and 13.5 ft. long), which allows it to operate on almost any terrain with no issues. The conveyor is 35 ft. in length, 36 in. wide and has 12 ft. of elevation adjustment, which provides more than enough length and width to place material quickly and accurately.

"For ease of maintenance and cleaning, the hopper separates from the placer unit for better access to all important components," Wetzel said.

Material is fed out of the conveyor at 608 ft. per minute. For ease of transport, the conveyor folds in half, which significantly reduces the footprint of the unit when on a trailer. Overall operating length is slightly more than 55 ft. and when folded it cuts the length to a little more than 37 ft. Wetzel added that the placer is equipped with the upgraded belt that allows for asphalt and stone to be placed in addition to concrete. 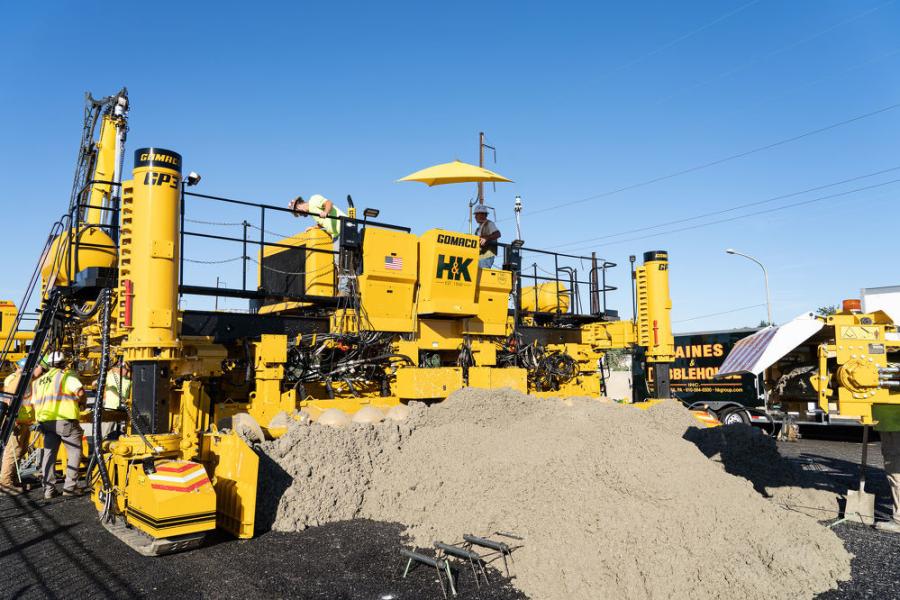 The GP3 is a four-track unit (GOMACO offers this machine as either a two-track or four-track unit) and is guided by Trimble for accurate paving to spec. G+, which is exclusive to GOMACO, also is fitted to this machine. Concrete is fed to the GP3 by way of the RTP-500, which feeds it to the front of the machine.

Once the GP3 begins tracking forward, augers feed the concrete into the machine. The concrete then comes out on the back side in a mold, where a crew of concrete finishers clean up and fix areas before the texture and curing machine finishes the slab.

The GP3 has a tie bar inserter on each side, which is hydraulically controlled. Transportation of the machine is made easy. The tracks rotate 90 degrees and the control stand retracts for transport. The machine, in transport mode, becomes 29.9 ft. in length (minimum transport length) and 9.2 ft. wide (minimum transport width).

"We opted for the larger Caterpillar motor in the paver for the eventuality of needing to go with a larger concrete mold," said Wetzel.

The larger motor also will allow for other accessories to be installed, if desired.

The Trimble system, made up of the PCS900 slipform paver control (mounted on the machine) and SPS930 universal total stations, steer the machine by way of a 3D guidance system. This system not only controls the vertical depth of the concrete, but also replaces stringline completely.

"The GP3 has built in sensors from the factory and the Trimble units tap into the overall system for full integration," said Josh Cain of Sitech Metro Northeast.

The machine operator controls the speed, the augers and the vibrators.

"H&K has been utilizing Trimble machine control since the late 1990s for earthmoving, paving and milling, so the next logical step was utilizing 3D control for concrete paving," said Todd Horvath, survey/machine control manager of H&K.

Horvath added that with the support of ownership, they have been able to harness the power of this technology to transform the way the company operates.

"As far as the GP3 goes, it has absolutely exceeded my expectations," he said. "There are many variables that come into play with concrete paving, but if the control and data [3D model] are accurate, then the GP3 will do exactly what you need it to do."

He also explained that the placement of the concrete from the RTP-500 is equally important to the success of the machine as is having the most accurate 3D model.

"It is 100 percent a team effort to get the desired results" Horvath said. 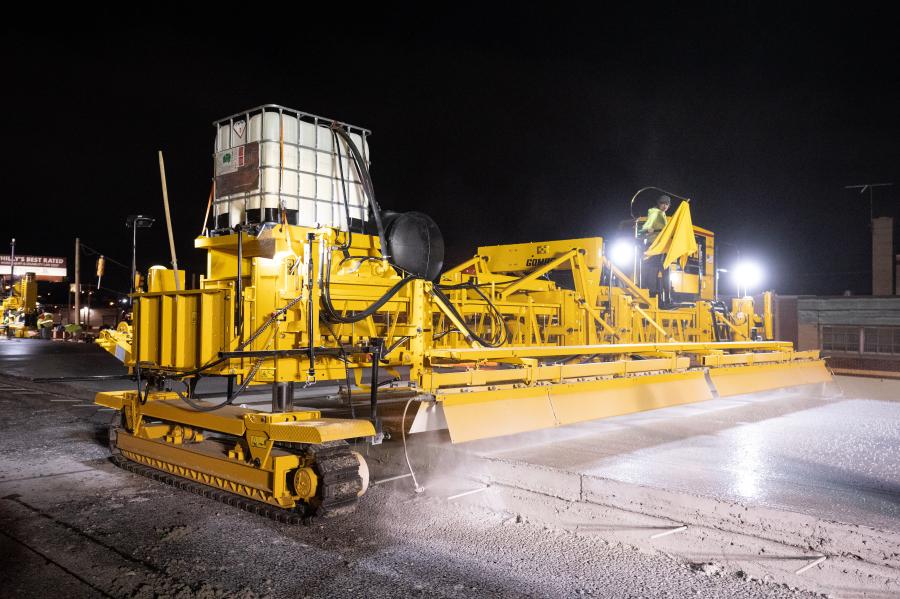 The final piece of the fleet of concrete paving equipment is the T/C 600 texture/cure machine. This unit is powered by a John Deere diesel engine and can move quickly at up to 161 ft. per minute. The speed of this machine allows the operator to stay with the paving operation.

There is one central operating station, which provides hydraulic control from one single spot. The machine is equipped with wire tines that give the concrete the texture needed per spec of the slab. Once the tines pass over the slab and reach the end of the paved area, the machine reverses and the curing agent is then sprayed over top of the slab.

"We also opted to go with a tote instead of a tank for the curing agent," said Wetzel. "This is the easier option in the event we need to swap out curing chemicals."

When speaking about the entire purchasing experience, Wetzel praised the GOMACO team.

"When we first began seriously looking into the concrete paving machines, we flew to GOMACO's plant in Ida Grove Iowa," he said. "There, we were able to see and try out different machines to figure out which setup would work best for our needs. We have had some very minor issues, which have been easy to fix with the help of the GOMACO team."

GOMACO sent out a mechanic and instructor when the machines arrived at H&K's corporate headquarters in Skippack, Pa. The company brought the concrete paving crew in for a demonstration on how to run, maintain and transport them. Once the machines were taken to the I-95 project, GOMACO then sent out another mechanic who was joined by a GPS technician from Sitech Metro Northeast.

The controls for each machine are very similar, so transportation by a lowbed driver is relatively simple. H&K Group Inc. is looking forward to the use of GOMACO paving spread on upcoming projects.