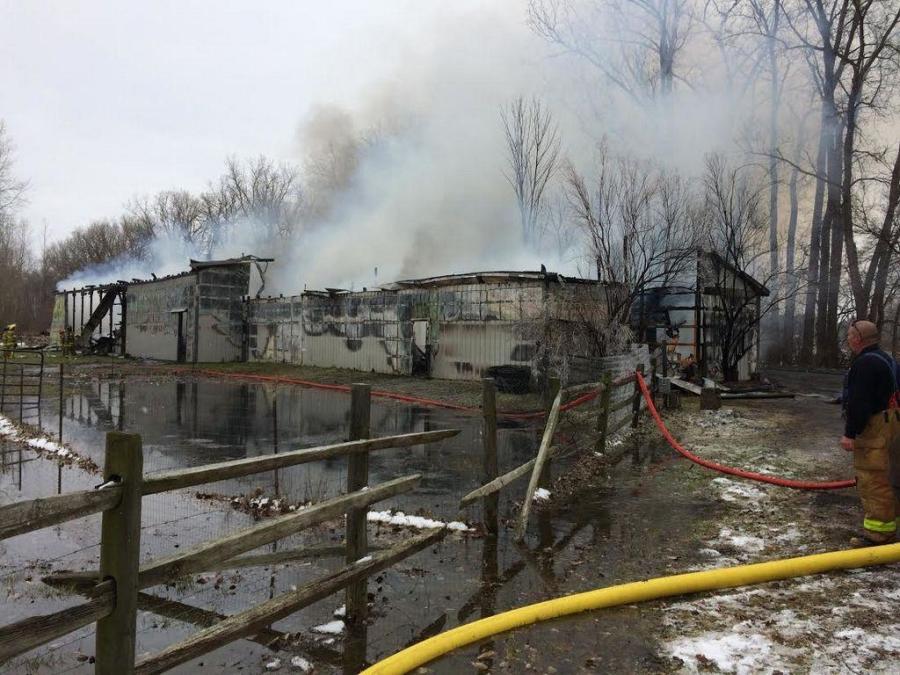 The barn is owned by Jeff Gibson, who operates Sewer and Water Specialists, an excavating company he started with his family in 2001. http://url.ie/11o5a

A six-alarm fire destroyed a large barn and several pieces of a businessman's heavy machinery on the afternoon of January 29.

Flames quickly spread through the 200-foot-long, metal-sided structure in the 2800 block of Stewart Rd. The barn is owned by Jeff Gibson, who operates Sewer and Water Specialists, an excavating company he started with his family in 2001.

"It's all gone," Mr. Gibson said as firefighters continued tearing off piece of metal siding while searching for hot spots.

Neighbor Linda Dudler rushed to help herd the six adult goats and six kids that escaped the fire. All were saved.

"I carried a baby," Ms. Dudler said. "Flames were just shooting out. All the smoke was just black."

Lt. Dave McFadden of the Frenchtown Township Fire Department said the call came in around 2:20 p.m. He said when crews arrived, 85 to 90 percent of the structure was already engulfed in flames. He said the barn contained containers of diesel fuel, gasoline and acetylene tanks. Eight blasts kept firefighters concerned.

"It was extremely dangerous," Lt. McFadden said. "We had explosions."

No one was injured, but additional assistance was needed. Stewart Rd. near Bates Lane was blocked to traffic for hours. The barn sits far off Stewart in the back of the Gibson property. The original barn was 60-by-100 feet and an 80-by-100-foot addition was later built on.

Mr. Gibson and his wife, Kim, have lived on the property for about seven years. He said he had no idea what could have started the fire. He said he was at the store when his wife called to tell him the barn was burning.

Mr. Gibson said although he lost several pieces of heavy equipment machinery, he is insured and plans to move forward and continue business.