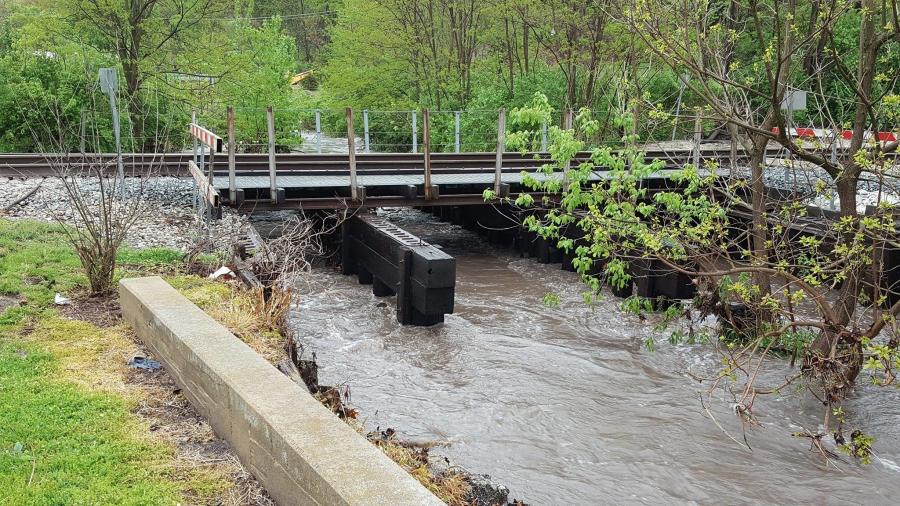 State versus state battle lines are being drawn across the Mississippi River, with a top Missouri official urging Illinois regulators to back away from a plan allowing higher levees that could push more floodwater to the Missouri side of the river.

ST. LOUIS (AP) State versus state battle lines are being drawn across the Mississippi River, with a top Missouri official urging Illinois regulators to back away from a plan allowing higher levees that could push more floodwater to the Missouri side of the river.

Missouri Attorney General Josh Hawley, a Republican, sent a letter in May to the Illinois Department of Natural Resources warning that a proposed rule change on levee regulation would “threaten to substantially increase the risk of severe flooding' in Missouri. The letter echoes concerns raised by environmentalists and the U.S. Army Corps of Engineers.

The issue is especially sensitive after another round of severe flooding. Torrential spring rains led to a sudden spike along portions of the Mississippi River, the Missouri River and hundreds of smaller waterways throughout the central United States.

Levees are made of dirt and covered with grass. They range from small mounds protecting farmland from minor floods to massive structures serving as fortresses around towns and industry.

The Illinois DNR's rule change would deregulate levees, allowing those already built to unauthorized heights to remain at those levels. It is supported by several state lawmakers and some river interests who worry about the increased frequency of severe flooding.

“Those living, working and investing along the rivers are worth protecting, so we encourage folks to invest in infrastructure to avoid chronic flooding,' said Aaaron Baker, executive director of the Upper Mississippi, Illinois & Missouri Rivers Association, which represents levee and drainage districts and supports higher levees.

The river battle is not new, and it runs both ways. Hawley's predecessor, Democrat Chris Koster, wrote to an Illinois lawmaker in 2013, warning that her proposal at the time to allow higher levees “could put Missouri levees and the property they protect in perilous danger.'

Scott Whitney, a flood risk manager of the U.S. Army Corps of Engineers in Rock Island, Ill., said officials in that state have complained that some Missouri levees are too high.

A recent corps study found that nearly 40 percent of the 205 mi. of levees from central Iowa to St. Louis are above their authorized heights, some by as much as 4 ft. Missouri, Iowa and Illinois all have levees in violation of corps requirements, but Illinois has the most.

There is little the corps can do about it. The agency's lone recourse is to kick offending levee districts out of a program that provides insurance to rebuild after flooding.

Rob Moore of the environmental organization the National Resources Defense Council said the Illinois rule change would create “this crazy arms race of who can build their levees the highest the fastest, which is kind of a 1900s-era approach to flood plain management.'

Some levees have saved significant damage along the river. Consider Hannibal, Mo., made famous as Mark Twain's boyhood home. The historic downtown area was often flooded, causing devastating damage in 1973.

In 1992, a corps levee was built. The next year, downtown Hannibal remained dry despite the biggest flood on record.

But except near populated areas, many experts believe it's better to let floodwater sprawl, restoring wetlands and bottomland forests and limiting development rather than building taller levees.

The largest levee district cited by the corps is the Sny Island Levee and Drainage District in Illinois, which includes 60 mi. of levees across from northern Missouri. Whitney said the Sny is 2 to 4 ft. above its authorized level in several spots.

Nancy Guyton, who farms with her husband in rural Pike County, Mo., said the Sny system pushes more water onto her land and neighboring properties.

“That water has to go somewhere,' Guyton said.

Sny superintendent Mike Reed denied that the levee is too high. He said the “authorized level' is a minimum height, not a maximum. In fact, he said it was the corps itself that built parts of the Sny a foot above the authorized level.

“They have said we are raising river elevations on our neighbors, and that is absolutely not true,' Reed said.

The corps is in the midst of a hydrological study expected to be completed this fall. Whitney said the study should offer some answers on the impact of levees and other river structures during times of flooding.