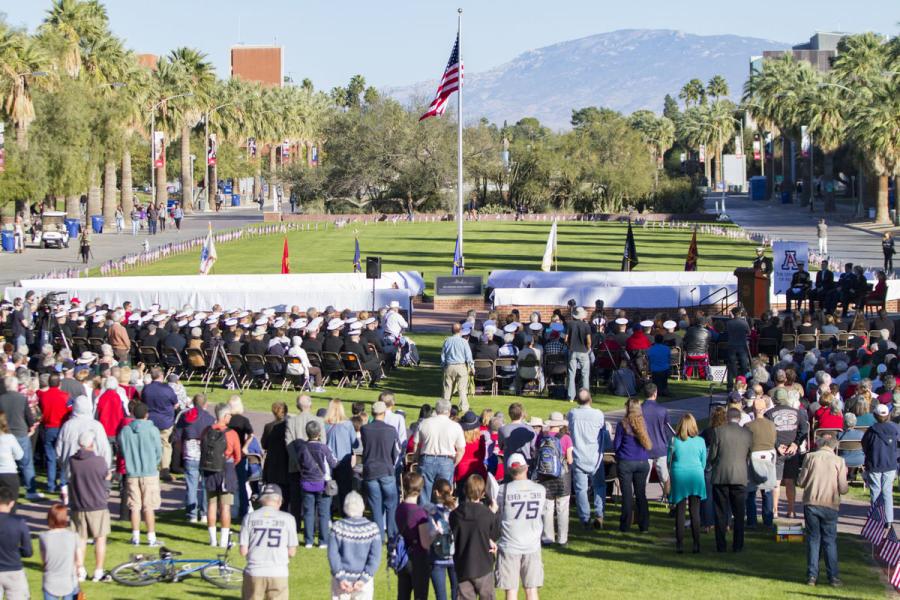 Hellas Construction is proud to have been a part of the construction of the USS Arizona Mall Memorial, located on the University of Arizona campus in Tucson, Ariz., that was dedicated Dec. 4.

Hellas Construction is proud to have been a part of the construction of the USS Arizona Mall Memorial, located on the University of Arizona campus in Tucson, Ariz., that was dedicated Dec. 4. The University of Arizona has a great tradition of remembering the USS Arizona and the eight military members from Arizona that were aboard when the Japanese bombed Pearl Harbor on Dec. 7, 1941, 75 years ago.

During the dedication ceremony, hundreds gathered at UA to honor the lives that were lost that day. Names of the 1177 officers and crewmen that were killed aboard the ship at Pearl Harbor were read as the ship's bell was tolled.

The tradition of honoring the USS Arizona at UA goes back to the 1950's, when UA acquired one of the original ship's bells, which hangs in the clock tower today. There is a sculpture, a memorial fountain, and a special collection of historical items as well at the university that honor the USS Arizona.

The newest memorial features a 97 ft. (29.5 m) by 597 ft. (182 m) curved, brick wall that represents the ship bridge with concrete panels that display gold medals with the names of all 1177 officers and crewmen that were killed on the ship during the Pearl Harbor bombing. The wall spans across the midway point of the ships outline. The memorial was designed by David Carter and used Accella materials. Hellas Construction teamed up with Accella and installed the large, full-size frame outline of the ship in a large grassy mall area of the University of Arizona.

Bob Allison, vice president of Hellas Construction said, “We are honored to be selected to support this important memorial project. This was a detailed and one-of-a-kind project that we are very proud of, in honor of our armed forces and those who make the ultimate sacrifice.”

The USS Arizona was a super-dreadnought battleship built for the U.S. Navy just before World War I in the mid 1910's. It was named after the 48th state that joined the union of the United States in 1912. It remained stateside during WWI, until escorting President Woodrow Wilson to the Paris Peace Conference in 1919, formally ending WWI and starting the path to the formation of the League of Nations.

Years later it was transferred to the Pacific Fleet on the coast of California. It was used for training between the wars and provided aid to survivors when the 1933 earthquake struck Long Beach, Calif. In 1935, it was also featured in the James Cagney film “Here Comes the Navy”. In 1940 it was transferred to Hawaii to act as a deterrent to Imperial Japan. It was bombed during the attack on Pearl Harbor, Dec. 7, 1941, killing 1177 officers and crewmen, and was damaged so badly that it sunk to the bottom of Pearl Harbor where it still remains today. UA currently has an exhibition “The Life and Legacy of the USS Arizona” at Special Collections on campus. CEG