­­No two job sites are alike, but they usually have one thing in common: they are above water. That wasn't the case for Helm Civil when it tackled a lock and dam rebuild for the Army Corps of Engineers on the Mississippi River in Rock Island, Ill. 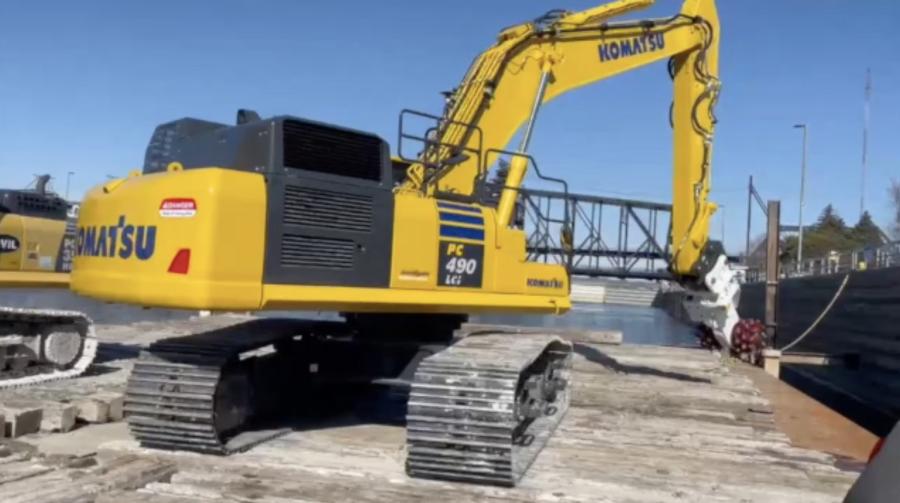 Lock and Dam 15 was built in 1931 on wood cribbing and wood piling. Over the years, consistent barge traffic caused the old foundation to fail on the lower guide wall that the barges use to come in and out of lock chamber.

"The section we had to grind was 360 feet long and 5 feet tall," said Clint Zimmerman, Helm Civil senior project manager. "All of it was about 7 to 8 feet under water, which obviously posed a unique challenge."

To complete the job, Zimmerman had to get the proper equipment. First, he needed a grinder that would work underwater. Second, he required technology that allowed the operator to accurately maintain grade when grinding under water. He turned to Road Machinery & Supplies Co. for help.

The result was to use a Komatsu intelligent Machine Control (iMC) PC490LCi-11 excavator with integrated GPS technology and an Antraquiq AQ-4XL grinder. This would allow Helm Civil to use a 3D model to control its depth and maintain accuracy while grinding, even as the river levels fluctuated.

"Derek Welge and Bryan Stolee really did a good job of bringing this together, and Chris Potter was instrumental as well," said Zimmerman.

With a model in hand, and the excavator securely positioned on a barge on the river, Helm Civil was ready to get to work. As the machine was grinding underwater, the operator was able to look at the screen inside the excavator's cab and know exactly where he was at and how far he needed to go. 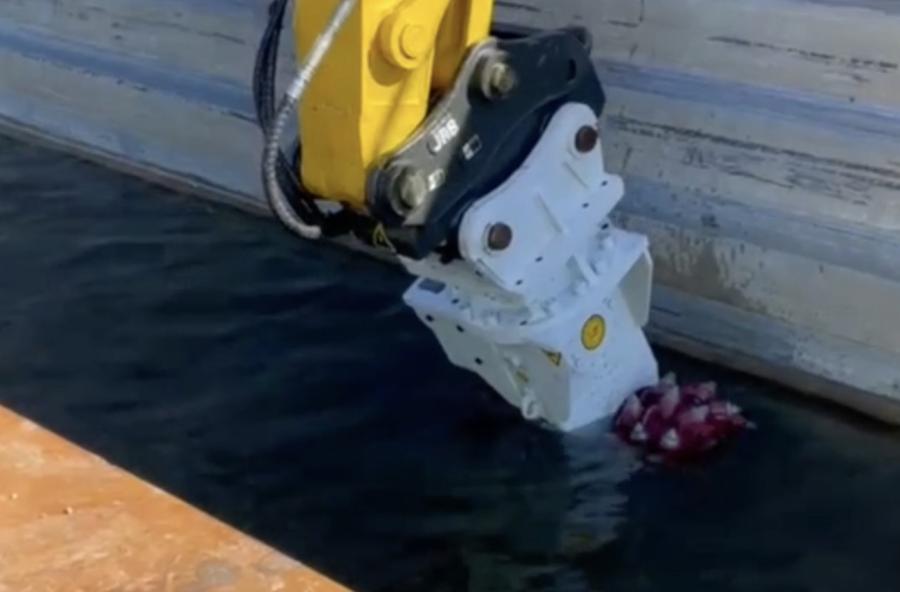 "The depth of grinding changed with the water level of the river," said Zimmerman. "The advantage of the technology was that we had a consistent picture of where we needed to grind, regardless of the water level. The operator always had an exact location to operate from. It was very impressive."

Helm Civil had used 3D modeling before, but not in this capacity.

"We had never used 3D modeling underwater," said Zimmerman. "We would have been operating blind, but the iMC technology allowed us to know exactly where we were at all times.

"I really don't know how we would have gotten this done with conventional equipment."

The use of Komatsu intelligent Machine Control allowed Helm Civil to complete the project in nearly half the time it expected.

"The grinding was scheduled for two weeks," recalled Zimmerman. "We brought the PC490 in on a Thursday, then we attached the grinder on Friday and shot control points around the job site. We started grinding that Monday, and on Tuesday alone we did 60 feet, which was very impressive. We were basically done that Friday. This was the only way to go." CEG