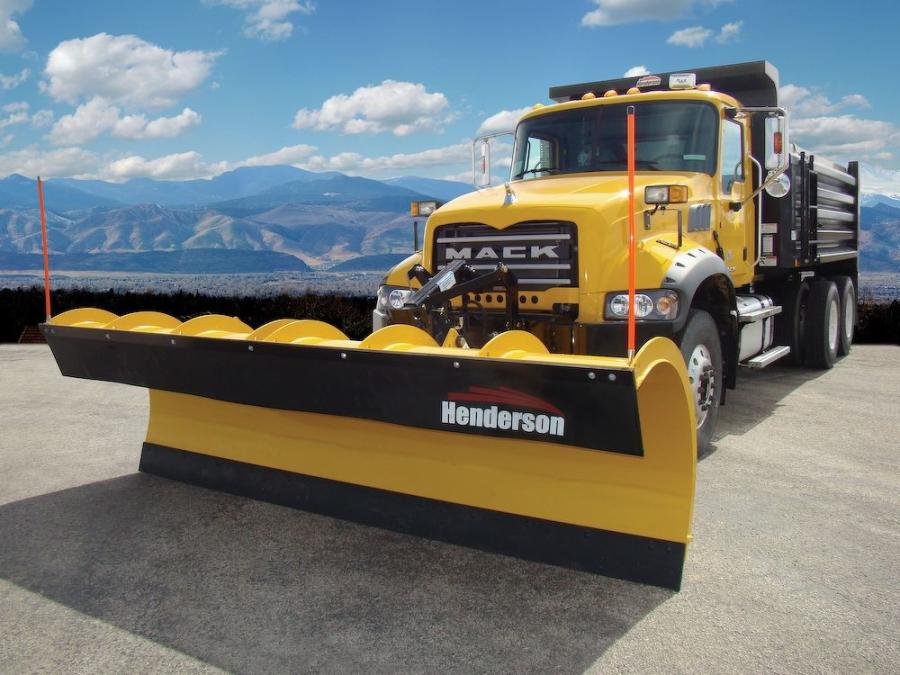 Manchester, Iowa-headquartered Henderson Products, manufacturers of innovative snow and ice solutions for municipal applications, have long been known as pioneers in the science of snow and ice management due to the development of its brine mixing and application equipment. Today, the company continues to thrive on its time-tested principles of using innovative design, including coatings and stainless steel, to prolong the life of its equipment, ensuring effective methods of keeping winter roads clear and safe for all. 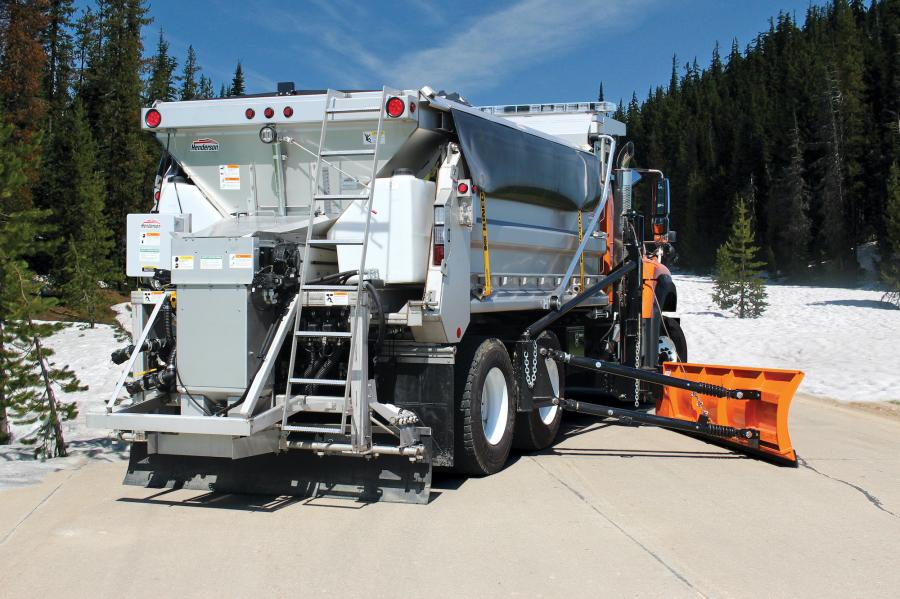 Addressing the industry need for properly mixed brine, Henderson developed products to make the job easy for winter warriors clearing the roads. The flagship of these products is the Henderson BrineXtreme Infinity, an automatic continuous self-cleaning/continuous production professional-grade salt brine system, and a full range of brine application equipment. The BrineXtreme Advantage is the perfect basic brine making workhorse, according to Henderson, where high-volume salt brine production combined with an unobstructed large clean-out door make it a popular choice and a sturdy one given the tank is built from stainless steel.

"We are proud of the contribution that we make to help keep America's winter roads safe. I have heard folks say that the best predictor of an upcoming winter storm these days is the faint white lines on the highway where the brine has been pre-applied and dried, or when they find themselves following a truck applying brine on an otherwise dry highway. The pre-application of brine is an indicator of the progress Henderson has supported in snow and ice management," said James Willey, marketing product manager.

The company's history dates back to 1943, when founder Ollie Henderson and a friend started a side business to their day jobs on a farm near Hiawatha, Iowa, making buckets and attachments for farm tractor front end loaders. Business expansion warranted a move to an industrial park in Manchester, Iowa, in 1958 — a location the company still occupies today. In 1959, the future focus of the company was born when local municipalities began using the Henderson fertilizer spreaders to spread sand and cinders on city streets for added traction on their slick winter roads.

The 1980s witnessed ownership changes, but just after the company's 40th year in business in 1999 Henderson Products was purchased by the Henderson senior management team. Half of the company's business comprised snow and ice removal equipment sold to cities, counties and state transportation departments. Another 40 percent of sales were truck dump bodies, asphalt bodies and combination bodies to use with the snow and ice applications and to the construction market.

In the early 2000s, Henderson began opening installation centers to install the bodies, plows and ice and snow control equipment across North America. In 2014, it became part of the Douglas Dynamics family, a North American manufacturer of vehicle attachments and equipment and home to several brands, including Western and Fisher Snowplows. 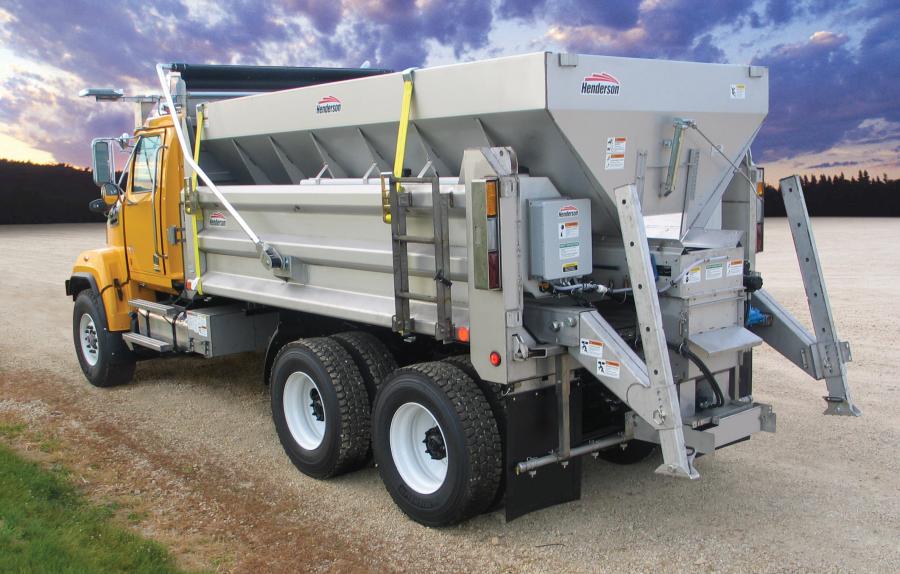 Pre-wet systems such as the Henderson First Response system apply sand and rock salt pre-wetted with brine to clear streets of snow, sleet and ice. The First Response System is Henderson's all-in-one package, handling all snow and ice control needs, regardless of road conditions or climate. Pre-wetting salt results in faster brine or reduced melting time, which also helps material stick like glue to the pavement, greatly reducing waste and keeping material where it's needed most, according to the company. Meanwhile, the Henderson TaskForce is an all-in-one snow and ice control unit, providing precision control over both granular material (up to 15 cu. yd.) and liquids (up to 800 gal.) for anti-ice or deicing applications.

The MARK E single and tandem axle dump truck bodies come with a variety of configurations, including side brace, side profile and floor options. Designed for use with many other Henderson products like tailgate sanders, wedge tanks and v-box spreaders, the options allow customers to choose exactly what they want for their needs and budget. The MARK E dump body family is available in classic square sides, 18-in. radius and asphalt configurations.

The BlackBelt Maxx is the ultimate combination truck body for advanced anti-ice and deicing. Henderson has poured decades of manufacturing expertise and work truck technology into this all-season multi-purpose combination body. With its full live bottom belt conveyor, the BlackBelt Maxx's capabilities include pre-wet applications, salt slurry generation, material hauling and high-volume material conveying, perfect for feeding asphalt pavers or for shouldering projects, according to the company. 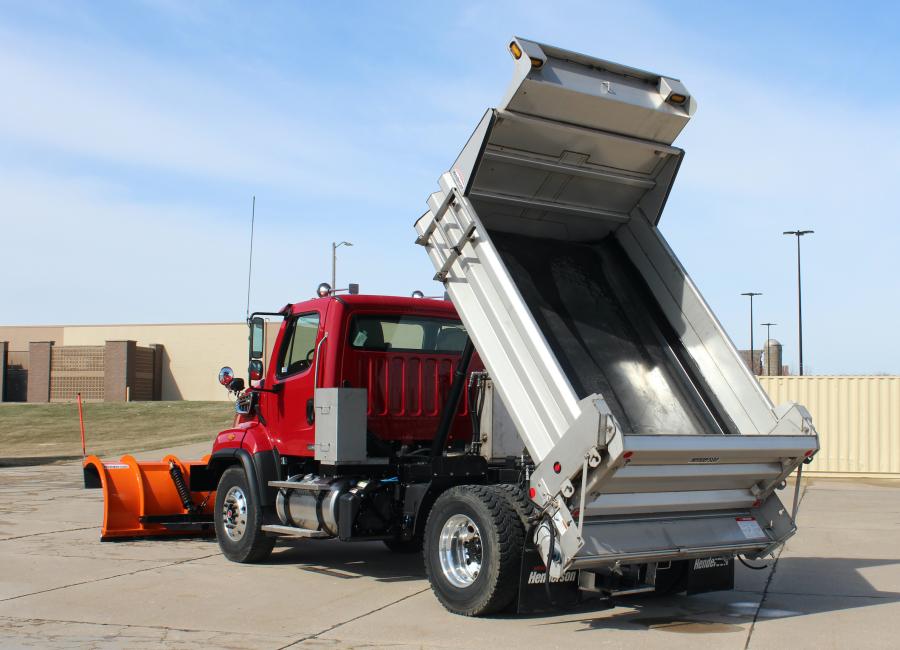 Henderson Products is sold through independent dealers, and direct to government agencies in every state in the continental United States and around the world. The company serves a network of upfitter dealers and government entities who assemble Henderson equipment onto trucks that work through the winter months keeping public roads safe, and spend their summers supporting road building and maintenance. Henderson Products' experienced personnel provide training to employees and dealers, and also provide technical service staff to address any questions dealers or customers may need assistance with.

Service parts, warranty service and sales support are served from the Manchester headquarters through an extensive sales force and dealer network. As a custom manufacturer, Henderson has the ability to meet nearly any application and equipment specification, taking into account regional preferences so that performance, desired features and all necessary functions are satisfied for each customer. This level of commitment earned the company a reputation as "The Dependable Ones" and helped position it as a recognized complete solution supplier of snow and ice control equipment.

Like any organically grown company though, Henderson has experienced some direction adjustments over the years, most notably the transition from a farm equipment manufacturer to a world supplier of municipal snow and ice control equipment. Despite 2020 being a challenging year in many ways, Henderson prioritized the safety and health of its workforce and will finish the year strong, ensuring all clients will have the equipment that they need.

Willey shared, "Henderson will start 2021 offering some yet to be announced new products. Maintaining the world's best snow and ice control equipment, dump and combination truck bodies and control systems takes ongoing commitment and huge efforts, but it is what we do. Henderson Products looks to the future with confidence, and we are ready to take on whatever Mother Nature can send us…we love the white stuff!" CEG