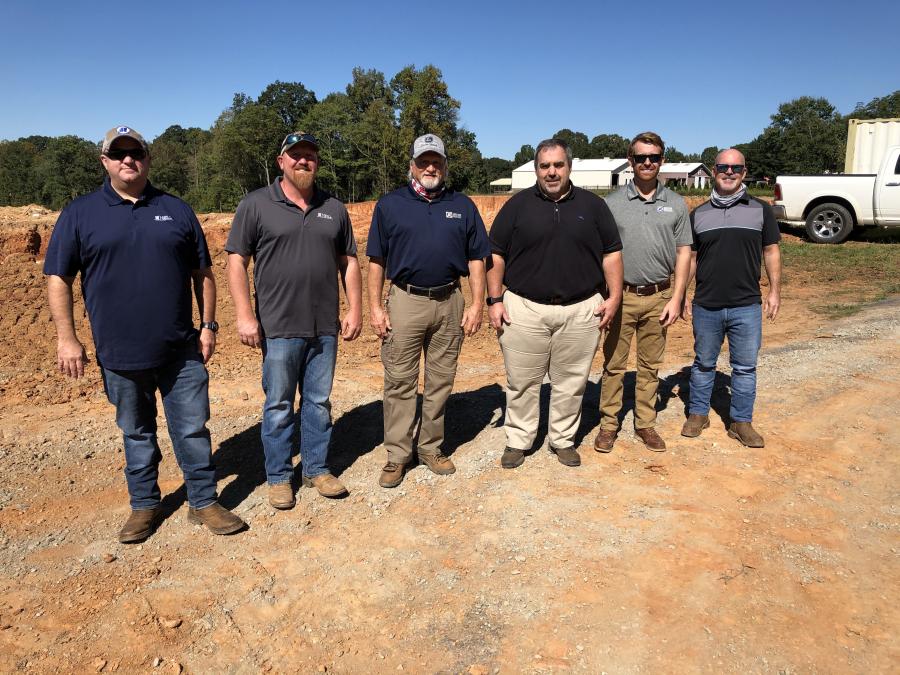 If a new construction company can make it past its fledgling years and manages to keep the lights on, any continuing success is due to a series of evolutionary periods.

For Hickory, N.C.'s Neill Grading & Construction, its success is rooted in being a third-generation family company. But it also is one that has evolved from its founding in 1966 to the present by slowly expanding with and adapting to changes in the industry.

Charles Neill started the operation 54 years ago by focusing solely on grading projects. The next step in the company's growth came about in the 1970s when Neill added utility work to its list of services.

In 1975, his son, Ed Neill, took over running the contracting firm and is today its owner, president and CEO. His more than 50 years of experience within the trade has blended well alongside that of his son, Clay Neill, who serves as vice president and professional engineer.

The Next Step Forward

Evolutionary changes often get a jump forward based on a need to survive — or in Neill Grading & Construction's case, a need to thrive.

That happened in the mid 2000s when the contractor welcomed the addition of several key people and, once again, began to broaden its services. With this expansion, Neill started to use its General Contractors License in 2011. In doing so, the firm activated its vertical construction division with the renovation of Hickory's historic Hollar Hosiery Mill, Lyerly Mill and Moretz Mill, as well as starting a land development operation.

The Prime Contractor at Industrial Park

Currently, Neill Grading & Construction is working on a 180-acre site north of Gastonia, N.C., where, as the prime contractor, it is preparing the land for a new industrial park for the Gaston County Economic Development Commission. 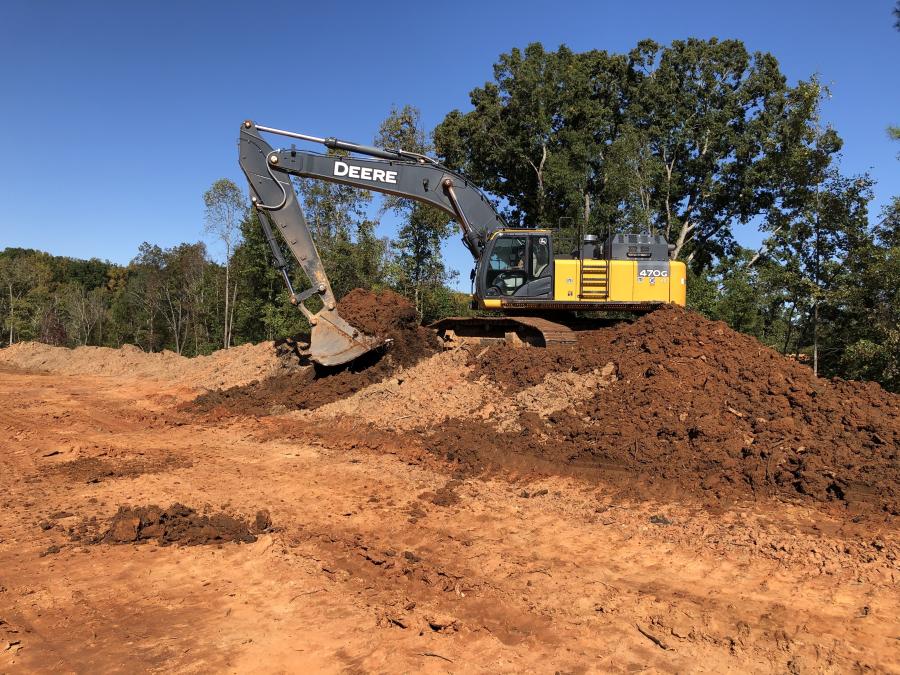 Wilson said his company began the work at Apple Creek in June, with an estimated completion target of late May or early June in 2021. The development is situated off the Dallas-Cherryville Highway near its intersection with U.S. Highway 321.

"We are very excited about this project because it seems poised to be a successful economic development project and has already seen the first couple lots upfront receive great interest with new owners ready to take them down and build," he said. "As we work all the way through the project, we hope to be able to stay here and provide additional site work services for the new owners that take down lots on Apple Creek's pre-cleared and rough-graded building pads. This is a legacy-type commercial park project for us and for Gaston County and we are grateful to be a part of it."

Matthew Hovis, Neill's project manager at the Apple Creek site, added that the county was concerned over meeting tight deadlines in getting the first two pads finished, due in large part to the uncertain weather conditions and rain threat to moisture-sensitive soils discovered there during test borings.

But after applying a lot of labor and muscle, Hovis said the contractor was able to finish both pads before the imposed deadline, and successfully turn them over to the clients.

After having utilized different scrapers and dozers as its primary heavy earthmoving equipment, Neill decided a few years ago to switch to using articulated trucks and excavators instead.

It came as a result of working on projects affected by all the rainy weather North Carolina has experienced in the last half-decade or so.

"When you are using scrapers, they only skim small layers off at a time," Wilson said. "When we switched to the articulated trucks, though, we were able to make deeper cuts, mix the top with the drier material below and work on days where we would not be able to otherwise."

When it comes to getting many of the heavy equipment pieces it needs for its range of projects, though, Neill Grading & Construction does not need evolutionary changes. 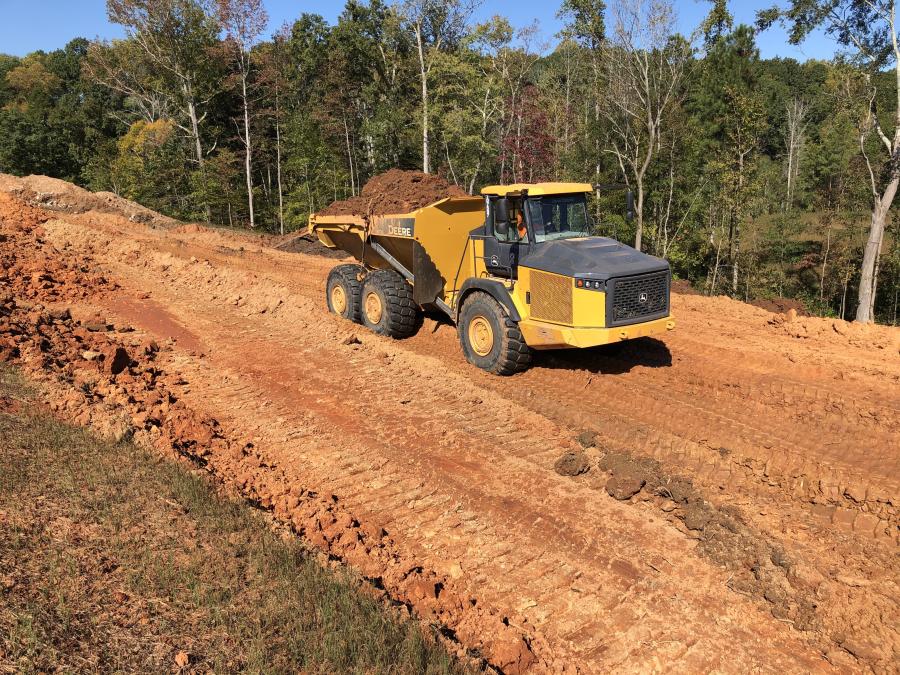 Rather, it prefers to rely on the decades of outstanding service it has received from the James River Equipment dealership in Charlotte, N.C. During that time, Wilson said his company has enjoyed a great relationship with Ronnie Rathbone, its James River sales rep.

The dealership has helped augment Neill's mix of approximately 30 machines at Apple Creek with several John Deere articulated trucks and excavators to give the contractor the ability to move 1.3 million yds. of dirt as efficiently as possible.

Besides finding vehicles that work better in wet dirt and clay, Neill's switch to off road trucks and excavators for its earthmoving has proven to be much more fuel efficient and productive for the company.

Hovis also was effusive in his praise for the John Deere 470G excavator, calling it an "excellent" machine for Neill to have at its disposal.

"We bought the first one about four years ago and just purchased the second this year," he said. "They're both equipped with 72-inch buckets and are a lot more efficient in terms of the quantity they load onto the artic trucks and the time they take to do so."

Neill Grading & Construction also has found itself impressed with the fuel efficiency rate of the John Deere articulated trucks.

"The fuel burn is very low on [John Deere's] machines, making them economical for us," Wilson said. "That is especially true in comparison to the older scrapers and trucks as recent technology makes them much more efficient today. They have turned out to be great purchases for us." 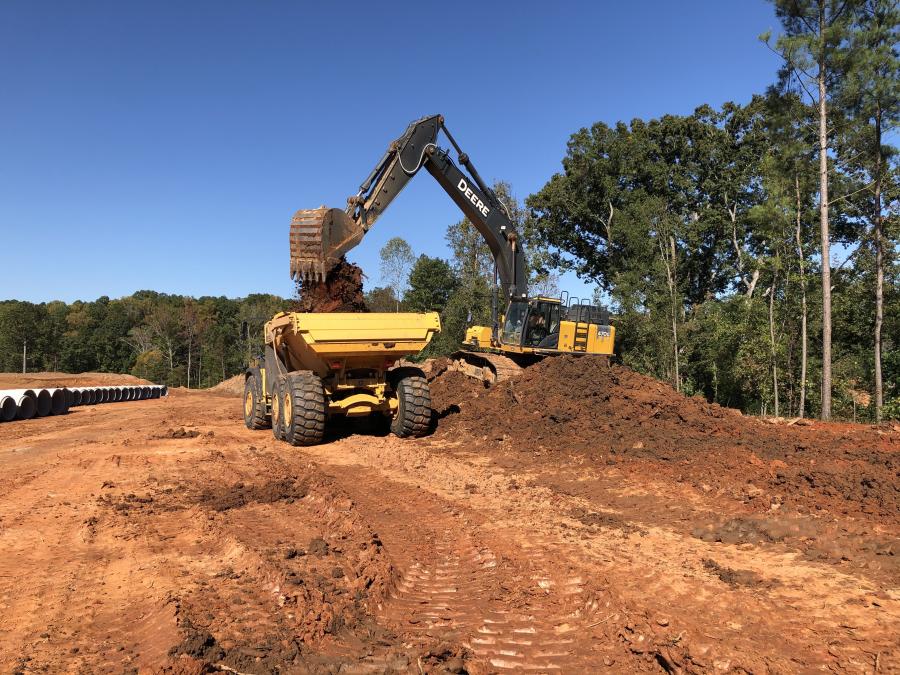 Coupled with being able to use John Deere's earthmoving machinery, Neill also has been the beneficiary of the service and support it gets from James River.

"Our shop foreman works directly with them on a regular basis," said Scott Zanotti, Neill's construction estimator. "He calls their parts counter when he needs to, and parts availability has always been excellent. Any time we have had a problem with a machine or part under warranty, they have come out and assessed it quickly. If we need a loaner machine while ours is being repaired, they bring one to minimize our down time and make sure those repairs are done quickly to get us back on track."

He added that Neill enjoys having access to John Deere's JDLink telematics system that remotely connects them to their equipment. The service provides alerts and information including the location of their John Deere equipment, how they are being used, plus their performance and maintenance data.

"We get reports on anything that's going on with our equipment, like high exhaust temperatures or a broken sensor, and because James River gets the same reports, we can coordinate with their shop to get the problems fixed," Zanotti said.