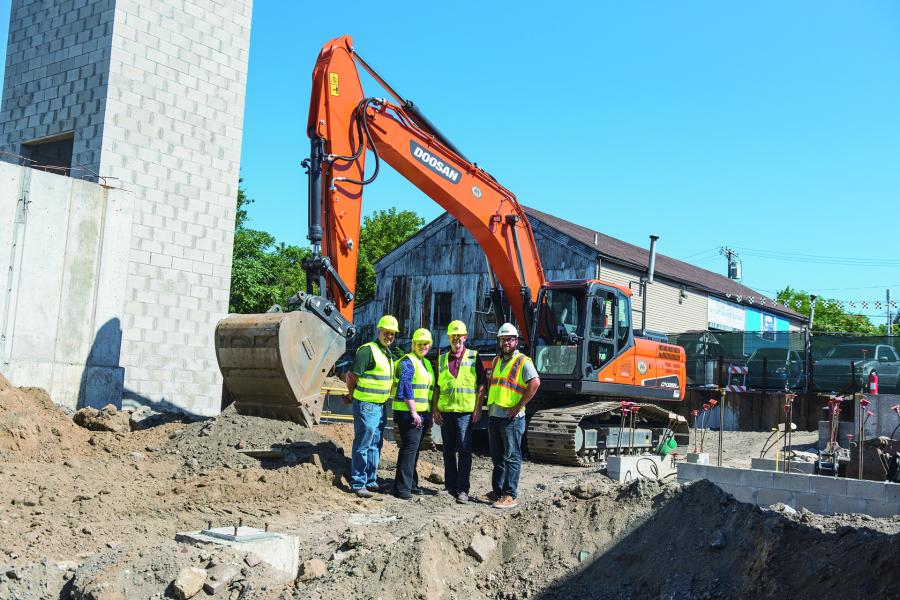 For us, the business only came back full strength in the last year or so,” said Rich Sullivan, who owns the Braintree, Mass., firm with his sister, Ann, and brother Owen. “There were some tough times, but right now there is plenty of work and our business is good.

After more than three decades in business, Metro Equipment Corporation is well-acquainted with the ups and downs of the construction industry. The current economic recovery, however, has been a little slower than normal for the family-owned company.

“For us, the business only came back full strength in the last year or so,” said Rich Sullivan, who owns the Braintree, Mass., firm with his sister, Ann, and brother Owen. “There were some tough times, but right now there is plenty of work and our business is good.”

The company, which started in 1986, specializes in excavation, site development and underground utilities. With the payroll back up to 40 employees and a pair of new high-production Doosan crawler excavators — a DX255LC-5 and a DX140LCR-3 — 2016 has been a good year for the Sullivans. This was evident at several job sites around the Boston area during summer and fall.

Three existing one-story structures were demolished to make way for a new five-story building that will include 32 condominiums and 33 onsite and off-street parking spaces.

This required careful coordination with the general contractor and environmental engineering consultants as well as their safety procedures to ensure that contaminated soils were trucked to an appropriately licensed receiving facility.

The Metro crew operated the reduced-tail-swing DX140LCR-3 excavator to handle demolition and dig the footings and slab on grade. A concrete bridge abutment, which was 9 ft. (2.7 m) wide in some places, was demolished using the excavator and a hydraulic breaker. The company also installed new water, sewer, fire and drainage services. The project is scheduled for completion in spring 2017.

The rehabilitation of 17 buildings covering two city blocks in a historic district in Allston, Mass., required ongoing coordination with the general contractor because the units were occupied during the project. Metro completed drainage infiltration, alleyway paving, grading, concrete stairs and flatwork. The DX140LCR-3 was used as Metro installed new fire, water and sewer lines and a new storm water recharge system.

This multi-year project started with the complete renovation of a century-old brick and limestone building, and the construction of a new adjacent structure. When completed, the site will be home to 82 contemporary condominiums and a ground floor parking garage.

During Phase I, which began in 2013, Metro excavated inside the original structure, a five-story parking garage. Everything, except the frame and the upper floors, was removed to accommodate a new ground level parking area.

The second building (Phase II) replaced a surface parking lot. The Metro team used the DX255LC-5 excavator and a hydraulic breaker to remove the asphalt surface and pre-existing underground reinforced concrete foundations. Next, the excavator dug down 15 ft. (4.5 m) for the new foundation. In order to dig deep, the company had to put in shoring/wood sheeting so the foundation could be poured. Metro also installed the water, sewer and fire services to the street.

Metro has a long history of working for the Boston Water and Sewer Commission doing both scheduled and emergency underground work. In recent years the focus has been on encouraging homeowners to replace the private lead pipe water service at their property. Most of the lead pipes are at least 60 years old.

A four-person Metro crew with a tractor loader backhoe removed the old pipe and installed new copper pipe from the street to the structure.

This type of work, secured through the bid process, has been a staple of Metro for many years. The turnkey playground projects range from $150,000 to more than $2 million. Completed projects include Russell J. Call playground for Northeastern University; Elliot Norton Park and Edgerly Road playground for Boston Parks Department; and Esplanade Spray Deck for Massachusetts Department of Conservation & Recreation (DCR).

Metro completed all of the excavation, grading and concrete work. Metro typically removes the old facilities and installs a new rubber surface, a drainage system, spray features and playground equipment. Metro acts as the general contractor and works closely with the owner and landscape architects to help install the designs.

“Bidding is real tight when work is scarce,” Sullivan said. “You really have to know what you are doing and have productive equipment, such as our two new excavators, to secure and handle this type of high-profile job.”

To be able to take on the additional volume of work in 2016, Metro purchased two new Doosan excavators from Equipment East, the Doosan equipment dealer in the Boston area.

“We've used many different brands of equipment during the 30 years we have been in business,” Sullivan said. “During that time, we've come to believe that there are a lot of good machines on the market. When we looked at Doosan, we found another top-of-the-line manufacturer.”

As a first-time buyer, Sullivan thoroughly researched the Doosan brand and liked what he discovered. “The company is one of the biggest equipment manufacturers in the world,” he said. “The fact that Doosan is very substantial is important to us. Plus, our mechanic and operators gave a thumbs-up when they tested the excavators.”

To keep up with the workload at the end of last year, the Sullivans decided to replace two aging excavators with the DX255LC-5 and DX140LCR-3. Both units bring three different-size buckets, an optional quick coupler and a hydraulic breaker to each job site.

“In addition to being a very good value, I liked all the features that came standard, such as the air suspension seat, rearview camera and Doosan telematics,” Sullivan said. “We've used the machines at a variety of job sites, both big and small. They are very productive.”

That turned out to be a very good attribute this year (and no doubt will continue to be in the future as well).

When asked what it was like as the volume of work increased, Sullivan said it was a welcomed challenge.

“For us, that's not unusual. Working for contractors on tightly scheduled projects, you learn to be ready and to be flexible. We've got the right people and the right equipment to do what's necessary to handle the work and get the job done”.