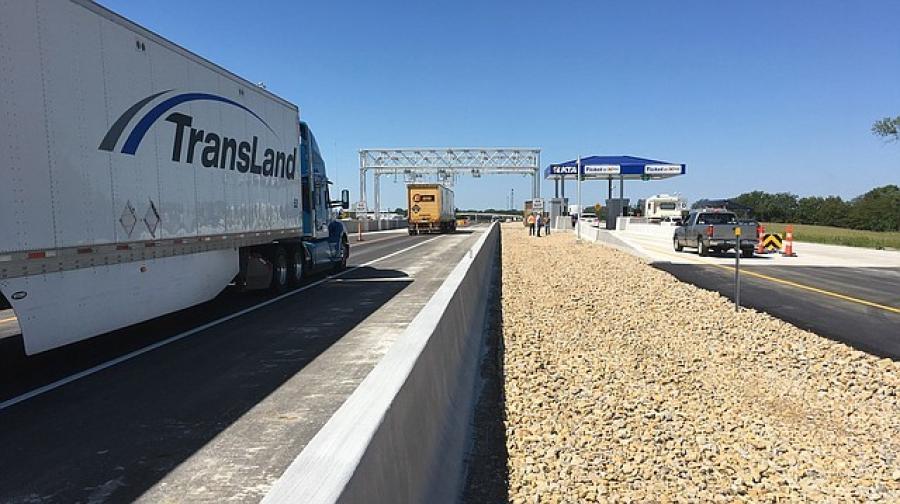 The toll plaza in the westbound lanes of the Kansas Turnpike's eastern terminal after one high speed toll lane was opened to traffic in August. (Kansas Turnpike Authority photo)

LAWRENCE, Kan. (AP) A lane that allows drivers to pass through tollbooths without slowing down has opened at the Kansas Turnpike's eastern terminal.

The single, westbound fast-lane opened to traffic in August near Bonner Springs, the Lawrence Journal-World reported.

Drivers with a K-Tag transponder have their bank accounts automatically charged when they drive through a gateless toll lane and onto the turnpike without slowing down. Other drivers still can use tollbooths.

The speed limit through the fast lane is currently 55 mph due to the area's ongoing construction, said Rachel Bell, a spokeswoman for the Kansas Turnpike Authority. The speed limit will be 75 mph when construction is finished, which is expected by November.

“This is a very big deal for our customers, and for [Kansas Turnpike Authority]," Bell said.

The project began in March and was budgeted at $16.5 million. Bell said the eastern terminal was the first of three high-speed toll lane projects funded by toll revenues.

The next place to get such a toll lane will be the eastern Topeka toll plaza, where traffic merges with Interstate 70. Construction is scheduled for 2018 and budgeted at $17.6 million, Bell said.

The third is the turnpike's southern terminal, which is near the Oklahoma border. That project is scheduled for 2019 and budgeted at $15.6 million, Bell said.

Bell said the new fast-lane has caused some hesitation and confusion but that there have been no major problems.

“We know it's kind of a new thing,' Bell said. “Everybody's trying to figure out where they need to be.'

She said the most important thing for everyone's safety is that drivers who use the new fast lane heed the sign telling drivers to not slow down.