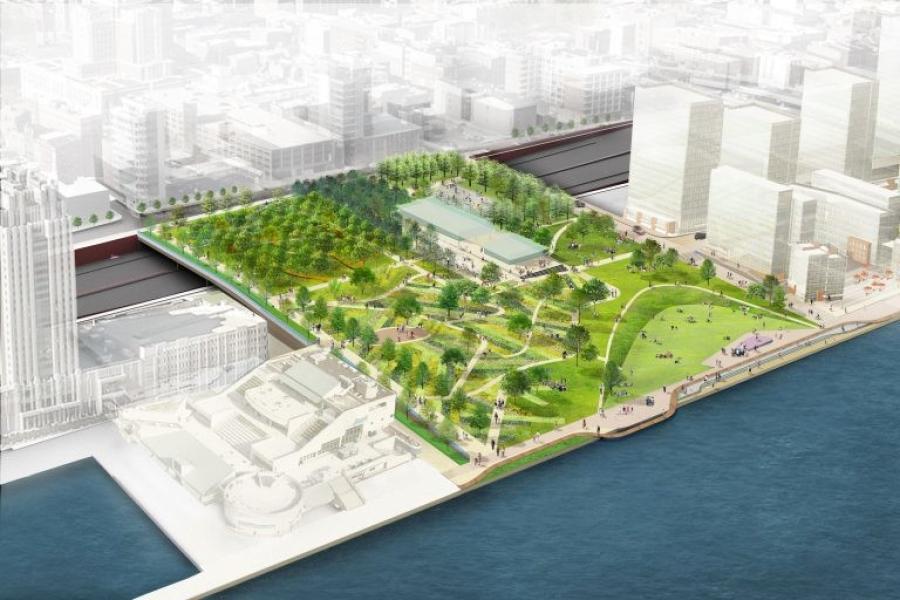 A rendering of the proposed park at Penn's Landing. (DRWC rendering)

A timeline that had sought to begin construction on a highway cap over Interstate 95 at Penn's Landing in Philadelphia has been pushed back another two years, according to the Pennsylvania Department of Transportation (PennDOT).

The agency's original plans were to hold a 2021 groundbreaking for the long-awaited transformation of the Old City highway trench into parkland across the interstate.

However, PennDOT Engineering District 6 spokesperson Brad E. Rudolph said in a recent email to Philadelphia's WHYY that the pandemic and other factors have delayed the proposal to where the state now expects to put the project out to bid late next year with construction starting in 2023.

That will likely push back the park's opening to 2026, two years later than its planners had hoped.

"The delay can be attributed to COVID and complexities of lease and property rights that go back many decades as well as engineering complexities that only come into focus during final design," Rudolph said in his email to the local NPR news station.

Construction of the interstate in the 1970s cut off much of the Old City neighborhood's access to the Delaware River and displaced many residents and businesses. But in 2017, after decades of discussion about restoring downtown waterfront connections, PennDOT, the William Penn Foundation and the city pledged a combined $205 million toward a $225 million proposal that would fund 12 acres of the highway trench between Chestnut and Walnut streets with parkland.

Little physical work has been finished on the Philly project, though, apart from the removal of some redundant highway ramps.

Joe Forkin, executive director of the Delaware River Waterfront Corporation (DRWC), the regional economic development agency guiding the project, told WHYY that slowdowns were not unusual in complex projects like the cap.

"Having worked with the project so long, we don't view that as a substantial delay or setback," he remarked to the news outlet. "I'm personally pretty pleased with the progress we've made."

Forkin said the reconfiguration of the trench to park space is still in its final design stages, adding that he hoped to unveil updated plans later this year, and right-of-way clearances were also being finalized with the Federal Highway Administration.

This process, too, was delayed by COVID-19, he explained to WHYY.

"Everything just slowed down with remote work," Forkin said. "A couple other projects got put on hold totally. This one did not, which we're pleased with."

A Hiccup After Decades of Problems

According to a July 21 report by WHYY, the delay is just another hiccup in the long saga of Philly's waterfront highway, which has generated controversy for nearly a century.

The NPR news station noted that even before the construction of I-95, port officials in the 1930s helped torpedo an effort to build an elevated highway along the Delaware River by citing fears it would disrupt access to wharfs and piers. In the 1960s and ‘70s, several highway plans across Philadelphia sparked protests from residents, including the waterfront construction of I-95, then known as the "Delaware Expressway."

As the interstate grew from existing highway segments on the city's periphery into densely populated areas of central and South Philly, planners met with fierce resistance, particularly in the newly redeveloped "Society Hill Project" area. Concessions were made to appease some residents to get the project built, while other residents feared the interstate would block river views and access.

For instance, one concession made by PennDOT was a cap running from Chestnut to Delancey Place over both the highway and Delaware Avenue, WHYY reported. But while I-95 was pushed through, in part over concerns from city officials that Philadelphia would not be ready for an influx of visitors to celebrate the 1976 Bicentennial, the capping portion was never fully realized.

Today, less than half of the proposed cap has been built, with key sections from Chestnut to Spruce left as an exposed trench.

While Philly's larger waterfront languished for years, more recently it has attracted private development and public improvements from DRWC, including the Spruce Street Harbor Park and new piers on Cherry and Arch streets, according to WHYY.

The latest capping proposal, which also includes a redesign of the Great Plaza at Penn's Landing, now figures into at least one longer-term private project — a $2.2 billion, 2.7 million square foot mixed-use waterfront complex pitched by the New York-based Durst Organization.

Despite the delay on the I-95 at Penn's Landing cap, Forkin said that DRWC was proceeding along with construction of the central portion of a 2-mi segment of the Delaware River trail between South Philly and Northern Liberties, first started last year.

He told WHYY that the funding gap for the cap also has narrowed to just $4 million, which would be made up with additional fundraising.

Forkin also said that he expected the cap to be completed ahead of the city's celebration of America's 250th birthday in five years and the current delay would not compromise that objective.

"We want it for 2026," he said. "We don't think this is an impediment to that goal. We think it's a three to three-and-a-half-year construction project."