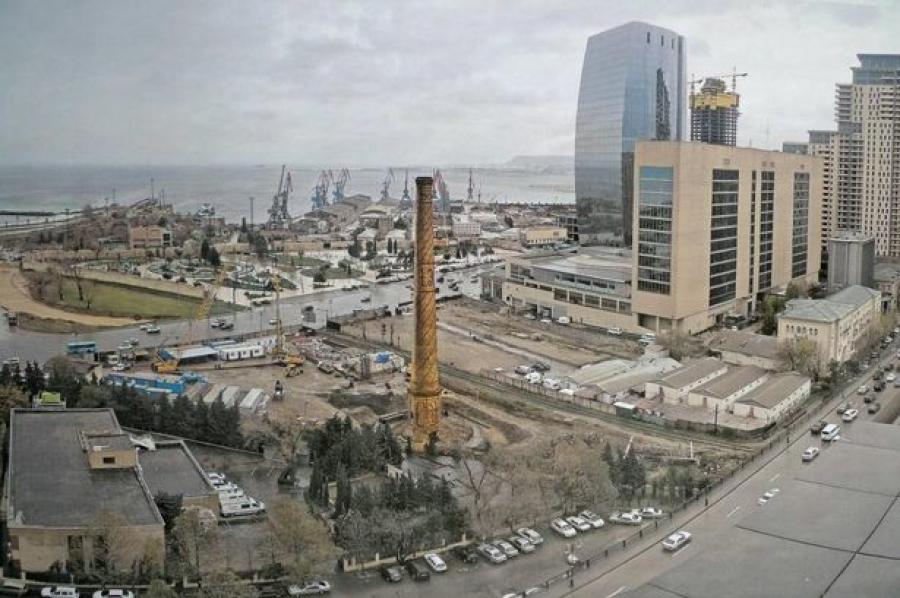 The chimney before restorations began.

Cintec International is ensuring that a historic industrial chimney will be at the heart of The Twin Towers Port of Baku scheme.

A demolition-threatened historic chimney in the Azerbaijan capital of Baku will now be the centerpoint of a multi-million-dollar new shopping complex thanks to the innovation of a Newport-based structural engineering firm. Cintec International has been commissioned to carry out complex structural preservation work on the chimney later this year in a $1.4 million contract.

Built in the 1900s the feature serves as the focal point of a regeneration project to establish Baku as an up-and-coming center of commerce and technology.

Original designs for the development, which will be called The Twin Towers of Port Baku, planned to have the chimney pulled down to make way for the modern shopping complex. However, when the President of Azerbaijan saw the plans, he requested that the historical chimney be restored instead and become a central feature of the development.

The result is a design which is representative of the futuristic vision for Azerbaijan whilst retaining important elements of its industrial history.

Cintec, which has been instrumental in the restoration of many of the world's most recognizable and iconic historic structures, was an obvious choice for the job and has already begun work on helping to preserve the chimney.

The company will be using its unique patented anchor to secure the chimney by drilling into the structure from the top and feeding 78 ft. of anchors into the walls of the chimney to secure it for generations to come. The chimney is one of the most delicate structures that Cintec has ever worked with and has required the company to design thinner connecting anchors especially for the project.

The circular structure of the building also means that Cintec will have to use laser keyhole technology to achieve the precision necessary to successfully position the anchors. The work is expected to take 12 weeks to complete, and the total project value is estimated at around $1.4 million.

Managing Director Peter James said, “This is another exciting contract for us at Cintec and we're delighted to be involved in helping to maintain this historic chimney as part of Baku's redevelopment. We're passionate about maintaining and restoring historical buildings for future generations so we were very pleased to hear that the chimney was going to be saved and honored to be asked to carry out the work.

“This project is going to be a challenge for us, essentially what we're doing is surgical engineering so it's very precise, but we enjoy a challenge at Cintec and we're looking forward to starting the work.”

The chimney is just one of Cintec's ongoing structural preservation projects. The company has worked in Egypt restoring its historical buildings for 18 years and has undertaken restoration work on mosques, temples and both the Red and Step Pyramids. Cintec anchors have also been used to restore other historically significant buildings across the globe including Windsor Castle, the parliament building in Canada and even the White House.