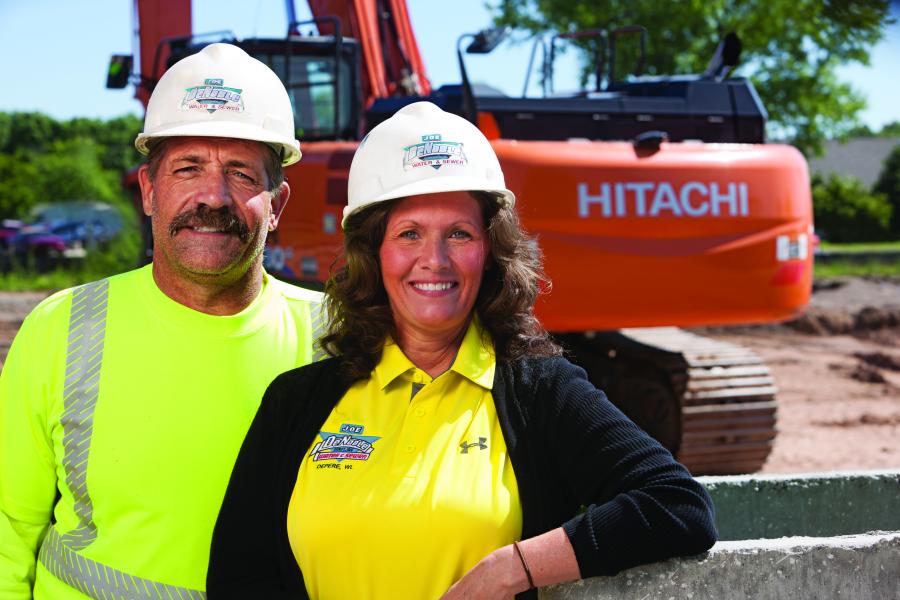 In Green Bay, Wis., Hitachi excavators have proved to be game changers on the Titletown District development, a destination area to be created on approximately 34 acres of land immediately west of Lambeau Field.

The ZX160LC-3, ZX380LC-6 and ZX470LC-6 Hitachi excavators that worked on the Titletown District development belong to Joe DeNoble Sewer & Water, a family-owned business started in 2002 that's headed by Joe DeNoble. Joe's wife, DeAnne, works in the office, and his daughter, Heather, works there part-time in addition to a full-time job. His two sons, Eric and Nick, are operators, and they'll eventually run the company. And you can't complete the line-up without another vital family member and employee, the company's 216-lb. mascot, Bernie.

“My dog Bernie is the mascot for the company,” Joe said. “He's with me 24/7, and he goes to every job site with me. He's ridden in my truck since he was six months old; he's eight years old now. Bernie's got over 400,000 miles on him, riding in the back of my truck. He's well-known in the area and a big part of the family.”

Joe purchased the ZX380LC-6 in December 2015, with the ZX470LC-6 joining the fleet in April 2016. Both excavators began working on the Titletown District development in May 2016.

The Titletown District development is bound by Lombardi Avenue, South Ridge Road, Marlee Lane and Brookwood Drive. Joe DeNoble Sewer & Water is involved in Phase 1 of the project, which is designed to maximize its unique location right next to Lambeau Field to attract more visitors to the area, spur additional regional economic growth, offer new amenities to residents and complement the greater Green Bay area's draw as a location to live, work and play.

Phase 1 of the project consists of 21 acres, including six acres of a planned 10-acre public park that includes a sledding hill, skating area, plaza and more. The project also will have as many as 70 townhouses along Brookwood Drive, and 180,000 sq. ft. of commercial space along Lombardi Avenue and Marlee Lane.

Eric DeNoble and fellow operator Dan Kaster were both pleased with the excavators' performance on the job.

“We got the 380 at the end of winter, and it fired up every day,” Eric said. “It's continued to be dependable.”

Targeted completion for Phase 1 is set for fall 2017 and planning and construction for the development is ongoing. Joe said his excavators, paired with his crew, proved to be game changers for his portion of the project.

“We're very fortunate that the equipment we have is Hitachi,” he said. “We've had no breakdowns. Our part of Phase 1 was projected to take 4 ½ months, and we completed it in 2½ months, so two months early. We're very proud of the work we've done.”

The Secret to Staying Orange

“We have a good relationship with Brooks Tractor, our equipment company in De Pere,” Joe said. “They're great people, and when we need something, they're there.”

Joe takes pride in his equipment and has a secret for keeping his machines bright orange.

“When we buy them brand new, we bring them into the yard and we actually wax the machines with airplane wax,” he said. “It keeps the machines looking good and orange.”

Of course, what's under the hood is just as important to Joe as the excavators' exterior.

“Hitachi is very reliable, and I like the Isuzu engines,” he said. “They're very dependable, strong-running, long-lasting, and the fuel economy is just remarkable.”

“Hitachi excavators are fuel-efficient, they're smooth and they're fast,” he said. “We've tried other equipment, and we've always come back to Hitachi — just an all-around good piece of equipment.”

When it comes to Joe, his family, his business and his equipment, it's all good.

“Every day is a new day in commercial/industrial construction,” he said. “It's always interesting, never boring. We're on different sites a lot. I meet good people; I have a good team. Good family. I'm not tired of it; everything is good.”

This story was reprinted with permission from Hitachi's Breakout Magazine, Winter 2016 issue.