Hogan Implodes Block of Homes in Baltimore for Revival 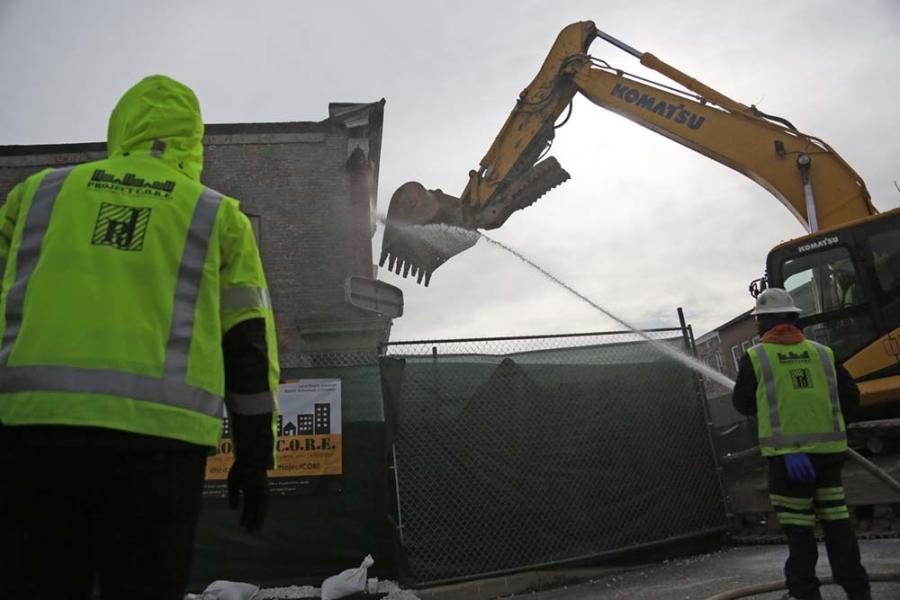 Hannah Klarner/ Capital News Service photo Construction workers aim water at an excavator that is used to tear down empty buildings in Baltimore, Md. The buildings were torn down as a part of Project C.O.R.E. to assist in revitalizing the city.

Gov. Larry Hogan visited Baltimore on Feb. 10 to demolish a row of homes on Chester Street as a part of Project C.O.R.E., a state and city initiative that aims to revitalize the city by creating mixed use retail and housing spaces, parks, and small business opportunities.

Additional goals for Project C.O.R.E. include bringing more jobs and families to the city by creating a more healthier and safer environment.

A couple of houses were demolished. The whole block of homes on Chester Street is slated to eventually be torn down.

It also is part of the effort to strengthen the ties between Baltimore and the state, which have been strained after the death of Freddie Gray, a city man who died after an injury while in police custody, and subsequent rioting.

Kenneth Holt, Maryland Department of Housing and Community Development secretary said that Hogan, a Republican, and then-Sen. Catherine Pugh, now mayor, and a Democrat, listened to the citizens of Baltimore and decided to make a change for the city two years ago.

The project is a four-year plan divided into two phases. Phase one is the demolition of blighted properties and phase two is revitalization through redevelopment, according to the Project C.O.R.E. website.

The block of row homes on Chester Street was chosen as one of the 30 projects of the $16 million awarded for the projected by Hogan in 2016, according to the Project C.O.R.E. website.

Chester Street is lined with dilapidated and vacant houses.

Hogan said he gave about $100 million to the city to tear down blighted buildings.

“I can't tell you how thrilled I am about the partnership we have with the city,” Hogan said. “We're going to have housing, community services and businesses back in the neighborhoods.”

Pugh said the project will help put people to work in the state and also create growth opportunities and home ownership in the city.

Pugh is looking to see more businesses in the area such as restaurants, cleaners and movie theaters.

“We want to see places where we can come and reside in our neighborhoods and be entertained as well,” Pugh said.

Hogan and Pugh also thanked Pastor Donte Hickman of Southern Baptist Church, and the whole congregation, for efforts in the redevelopment of the community.

The blight is located less than two blocks from the church.

Reba Hawkins, a member of Southern Baptist Church, said she believes the demolition will contribute greatly to the community.

“Living in the area and pretty much being an advocate, you see a lot of corners in the city that look like this (Chester Street),” Hawkins said. “You have a high infestation of rodents. We have a lot of individuals that lurk within these homes that are unstable and in blight condition and I think it will be good for the community and for the neighborhood to keep this momentum going.”

“Believe it or not bringing this eyesore down will shed more sunshine on the possibility of what could be and we need to keep this going throughout the city,” Hawkins said.