Holograms Could Speed Up Construction Projects

Builders are experimenting with Microsoft’s HoloLens to visualize projects and avoid expensive mistakes. 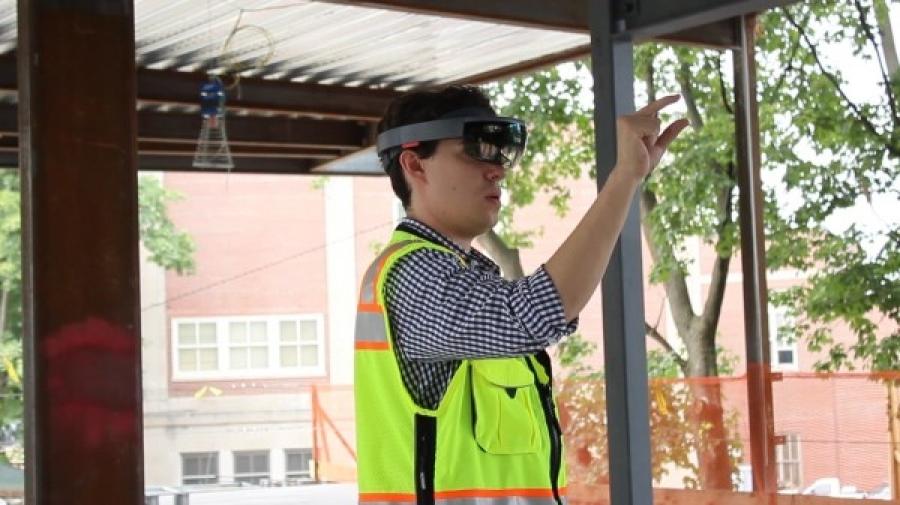 Employees at Gilbane Building Company, a commercial construction firm based in Rhode Island, usually work off paper blueprints or with digital models that they view on computers or iPads. But Gilbane senior manager John Myers now gets a closer look by putting Microsoft's augmented-reality computer, HoloLens, on his head.

When Myers recently put on HoloLens to look at a mockup of a project, he could see that steel frames the company planned to order to support the building's walls were too long to fit the design. Having spotted the issue ahead of time, the company can now ask the supplier to cut the frames shorter in his shop rather than make workers adjust dozens of tracks that would hold the frames in place. Myers estimates that the move will save Gilbane about $5,000 in labor costs.

Construction is one of the least automated industries around, and it will be for a long time. But augmented reality might begin to change that. Tools like HoloLens, which places holographic images in its user's physical environment, could help this $10 trillion business increase efficiency so that fewer projects run over budget and behind schedule. Gilbane is one of many early testers of the technology. The engineering firm AECOM, the design and architecture firm Gensler, and the China State Construction Engineering Corporation have also announced they are experimenting with HoloLens.

Gilbane says the $3,000 HoloLens, which it received in mid-June, has already shown its value. It was while viewing life-size 3-D models of Dearborn STEM Academy, a $70 million, 120,000-square-foot school Gilbane is constructing in Boston, that Myers spotted the frame-length issue. “That one catch paid for the HoloLens,” he says.

Gilbane vice president Sue Klawans says HoloLens could also be used before a building is constructed to detect flaws in the way ducts and pipes are laid out in office ceilings—a complicated process that often takes up more room than anticipated—and in building designs that feature glass “curtain” walls, which sometimes require more than 10 different contractors to fabricate.

I tried Gilbane's HoloLens at the Dearborn STEM Academy site. After strapping on and adjusting the headset (which required another person's assistance), I pinched my fingers in the air to move a 3-D image of the school's mechanical room from its virtual perch on a table to the floor. Then I tapped a button on a virtual control panel to increase the model's size to 100 percent. That let me walk inside it and look at details of the construction as if it were actually built. Using a virtual control panel, I could also toggle different views on and off to see either a simple architectural image of the room, a more detailed structural image, or one that just showed its mechanical, electrical, and plumbing systems.

All the features I tried were easy to navigate and seemed useful. But the HoloLens image stuttered at times, and the life-size model didn't quite look like a real room, partly because the headset's lenses don't cover your peripheral view.

Amar Hanspal, a senior vice president at the software company Autodesk, which supplies the building visualization data necessary for the system to work, says that eventually, builders could wear HoloLens at construction sites “and see in real time, 'Here's what the building should be and here's what it actually looks like.'”

First, though, builders have to figure out how to wear HoloLens along with their safety gear and keep it from being a dangerous distraction. HoloLens wraps around the middle part of your head, like a bulky pair of goggles, which makes it difficult to wear a hard hat at the same time. Another problem: its lenses aren't as rugged as construction safety glasses, which are typically heat-resistant and shatter-proof. There's also a possibility that the holographic images could divert your attention and cause you to take a wrong step—a potentially fatal move on a multistory construction site. For now, Gilbane employees are mostly using HoloLens inside a mobile office trailer parked on the side of the school construction site.

Reviewing construction models via HoloLens would be more useful if people could make notes directly on the 3-D images they were viewing. Trimble, a technology company that sells the popular 3-D modeling software SketchUp, lets people do that in its HoloLens app. Users can mark problem areas on SketchUp building models with circular virtual icons and record short audio clips explaining why they highlighted particular spots. Eventually, they might be able to use their hands to move an element within a virtual mockup and immediately see how the change affected the design, says Aviad Almagor, who leads Trimble's HoloLens business.

“We're going to want to see HoloLens improve [as a construction aid],” says Klawans, the Gilbane executive. “But it's a leap over what we were doing before. It's not just a new toy.