How a Trailer Can Carry Courage, Strength and Hope

A married couple spots a pink trailer in the parking lot of a local business, and it strikes a chord. 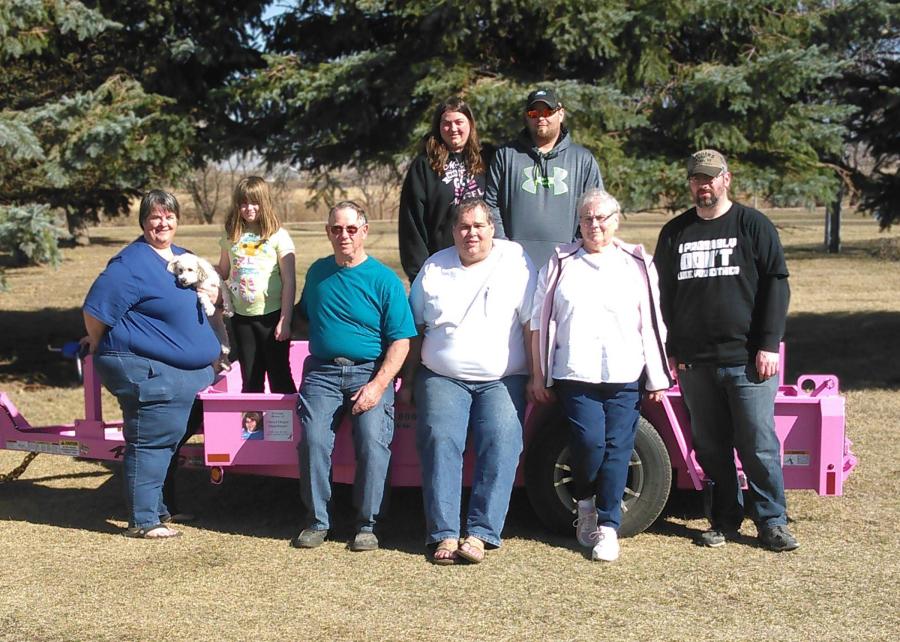 Gerald and Darlene Dinger of Britton, S.D., were on their way to Camping World in Rogers, Minn., when their path brought them through Sauk Centre, Minn. As they drove down County Road 28, they saw a “pink trailer” in the parking lot of a local business. When the Dinger's took a closer look at the trailer, they saw the trailer was a Felling FT-3 and had a “bright pink” breast cancer awareness sticker on it.

This sticker struck a chord for the Dingers, as they lost their second oldest daughter Cheryl to breast cancer a few years prior. They decided they wanted their own pink trailer to own and use in honor of her memory. The Dingers took down the contact number for Felling Trailers, and a short time later, Gerald made the call.

Gerald spoke with a Felling Trailers sales consultant and told him how they had lost their daughter and wanted to order a trailer like the one they had saw that day.

The trailer sales consultant was able to get the ball rolling on the breast cancer trailer for the Dingers and set them up with Albers Sales, a Felling Trailers authorized dealer in Oaks, N.D., just 40 mi. from the Dinger's home in Britton.

For Gerald and Darlene's daughter Cheryl Stiegelmeier, her journey started with a bruise. Cheryl had injured her breast, which resulted in a lump and bruise.

At the time, Cheryl thought nothing of it. As the bruise faded though, Cheryl started having bad pain in her leg, and unlike the bruise, the pain got worse. The pain persisted long enough that Cheryl went into the doctor to have it checked out. The doctor did some tests and ordered x-rays but could not find anything so he prescribed Cheryl with pain medication to manage the discomfort.

“When the pain did not go away, Cheryl decided it was time for a second opinion, “ said Darlene. The second doctor found what the first had missed. The x-rays showed signs of cancer. The bruise and lump that Cheryl had earlier was found to be cancer.

At age 43, Cheryl Stiegelmeier was diagnosed with breast cancer and it had already spread to her bones.

Cheryl endured many “bumps in the road” as she called them during her uphill, hard fought battle against the disease.

“She never gave up, she never once complained. Her body just gave out. She showed us how to die,” said Darlene.

Cheryl's family gave her all the strength and support they could as she waged her battle, but after three years, the cancer won.

Even though Cheryl is gone, her memory and spirit live strong. Each year the Stiegelmeier and Dinger families participate in the Relay for Life in Britton, S.D.

“The town of Britton does a really big Relay For Life event each year. Since it started here, the fundraiser has made more than $1 million,” said Darlene. The Dingers plan on using the memorial trailer, which features a memorial decal of Cheryl, as part their Relay for Life fundraising efforts, and will be part of their camp at the Relay for Life event.

The Relay for Life is an organized, overnight community fundraising walk that benefits cancer research and more. Relay for Life events take place all over the country. Relay Teams camp out around a track and the members of each team take turns walking around throughout the night. The Relay experience is one that:

• Celebrates the victory for those that have won the battle.

• Remembers those that have fought, battled and not won.

• Inspires others to continue to “Fight Back” against cancer.

“We were asked to bring the trailer down and have it put on display at the car show, during Britton's Harvest Days in August,” said Gerald. Although they lost their daughter, her memory will carry on and hopefully inspire others affected by cancer to stay strong and continue the fight.