How the First Hitachi EX1200-7 in North America Leads the Way for Rango Inc. 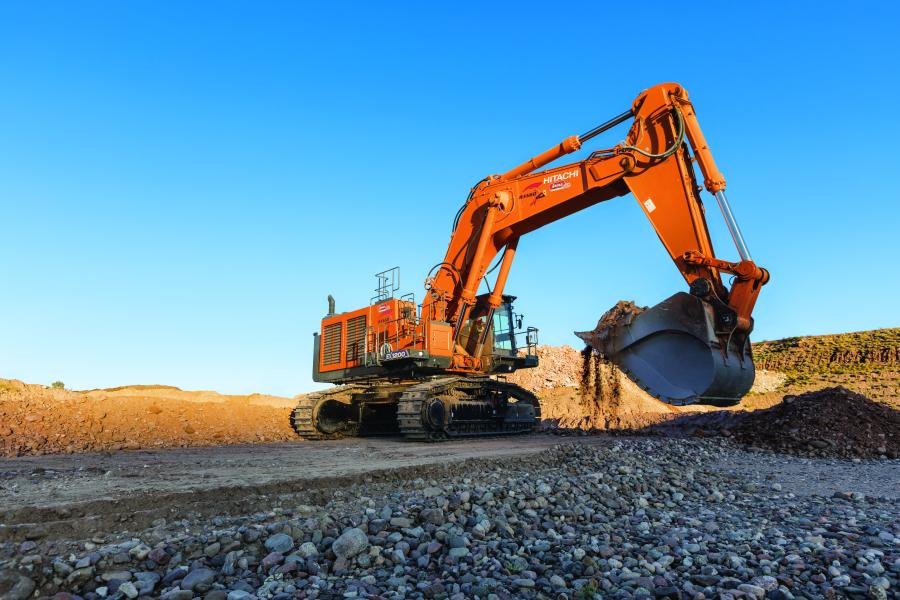 The 1200 series of machines are the only excavators that Rango uses to move high volumes,” said Dan McQuade, CEO, Rango.

When the new EX1200-7 excavator rolled onto a Rango Inc. job site, there was an energy you could feel in the air. Not only had they received a new EX1200-7, but it was the first Dash-7 to be delivered and digging on North American ground.

The crew put it to work immediately, breaking through 15 ft. of concrete-like conglomerate to mine aggregates at a job site in Mesa, Ariz.

"We're like a bunch of kids in a candy store," said Dave Johnson, general production superintendent at Rango. "Especially when the new 1200-7 was delivered. I had multiple operators on other jobs asking when they were going to be able to run it. We all got pretty excited."

Ready, set, grow — this has been the mentality at Rango, an excavation, haulage and stockpiling service provider for the mining industry headquartered in the Phoenix, Ariz., area. This mentality is also why the company added the brand new EX1200-7 to its fleet.

Dan McQuade, CEO of Rango, took the position with the task of meeting the goals of a five-year growth plan. The expansion and diversification plan were the vision of the leadership team and Rodney George, one of the founders of Rango.

With this strategic vision, the company has seen exponential growth in the past couple of years — leaping from 45 employees in 2017 to nearly 200 employees and 225 pieces of heavy machinery today.

By expanding its mining, hauling and aggregates service offerings as well as its geographic footprint, the family-based corporation has hands in multiple honey pots, including a sister company, Rango Honey, that specializes in honey and beekeeping. Yes … beekeeping. 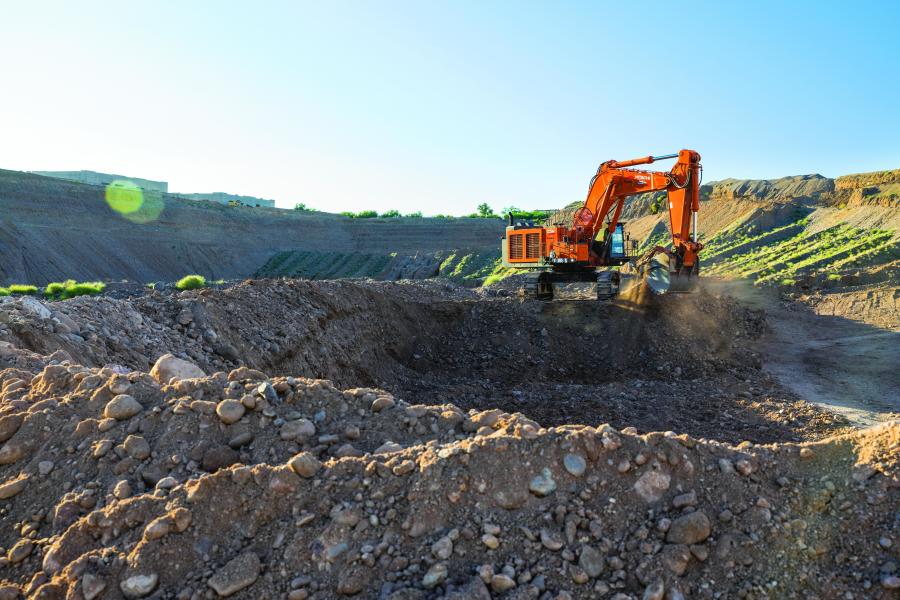 When Rango Inc. received the EX1200-7 it was the first Dash-7 to be delivered and put to work on North American ground.

With the evolution of Rango's mining business, there's little patience for equipment that isn't ready to handle the fast pace. Among all the business changes that have occurred, there's one thing that has remained the same: the company's loyalty to Hitachi excavators. Specifically, the 1200 series.

As a serial purchaser of Hitachi machines, Rango has had several EX1200-5 and EX1200-6 excavators and were impressed with their productivity and speed. When the opportunity came to order the new EX1200-7, it was the clear next step.

"Hitachi is our choice as the best excavator on the market," McQuade said. "The quality, the cycle times, the production levels, the uptime, and just the overall ease for the operators when they're sitting behind the controls all day, every day. We think they're the best machines out there, so Rango is really focused to stay with that line."

"It's no secret that the excavator is kind of like the kingpin on your job," McQuade said. "It's the most valuable piece of equipment, and sometimes the single piece of equipment that we have on the job. Keeping its efficiencies near 100 percent is what's going to make the job successful in the long run. It's as simple as this: if a track hoe or loading truck is waiting, then we're losing money."

Not only does the combination of uptime and power make this machine a winner for Rango, but the ease of transportation makes a bottom-line difference as well.

"We go from job-to-job with our business model. With some competitor machines out there, you might need 12 heavy haul trucks, cranes and multiple people to move a machine," McQuade said. "That can cost thousands and thousands of dollars. The 1200-7 is easy to move and then put back together, which is a benefit for us as well."

For the growing array of work Rango digs into, the EX1200-7 provides the versatility they need for many job sites. 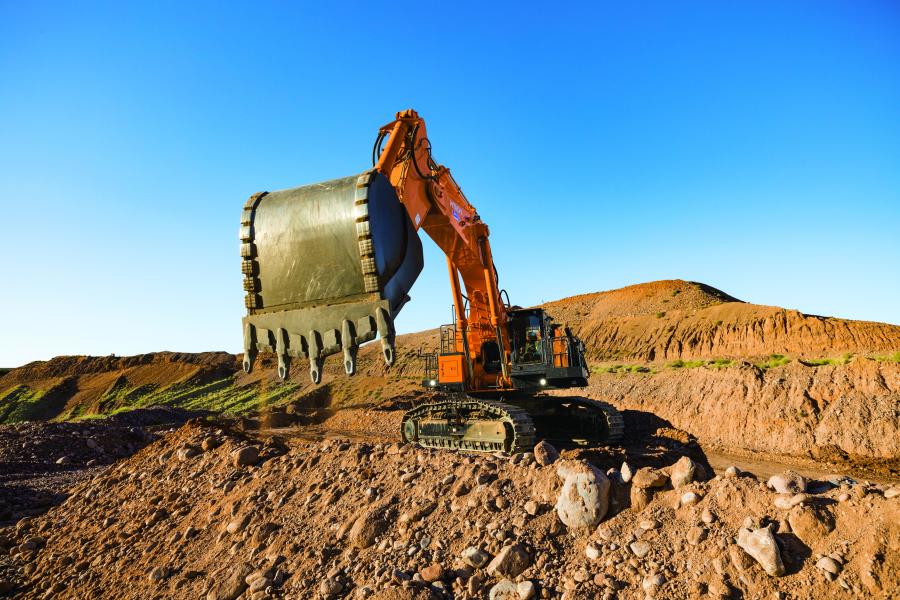 The EX1200-7 is powerful enough to dig through tough conglomerate, having a huge impact on productivity.

"The 1200-7 is phenomenal and very versatile," McQuade said. "Whether it's hard digging or soft digging, you know you can configure the bucket so that the horsepower behind the machine, the hydraulics and every-thing in the design just lets you be the best you can be. That's why we've stayed with this line and purchased the new Dash-7."

Johnson is pleased with the new machine as well and explained that the speed and breakout power of the EX1200-7 is what makes it extraordinary.

"I can't emphasize enough how fast these machines are. It's an EX1200 and it feels like you're running a machine that's half the size," Johnson said. "It's going to run as fast as I want it to run, and I'm going to be able to get as many loads out in the day as I can with that machine, even through caliche and the tough stuff."

Since Rango works heavily in aggregates, having an excavator powerful enough to dig through tough conglomerate has a huge impact on productivity.

"The breakout power of the Hitachi is just phenomenal," Johnson said. "With other machines, when you hit tough caliche, it feels like they power out. The bucket would stop and sometimes lift the whole machine up off the ground, tracks and all. With the Hitachis, they just keep going."

The Power of People and Equipment

McQuade contributes some of the success and growth of their company to the culture Rango has built. He said it's not only about new machines, but also the operators running them.

"Our people and how we treat them is what makes the difference between a good company and just an okay company," McQuade said. "Everyone can buy the best equipment made in the world, but the difference is your people."

That said, the EX1200 series is now a staple in Rango's formula for success.

"If I was going to give advice to someone out there as far as equipment or model selection," McQuade said, "I would tell them to not buy any Hitachis at all because Rango is going to need the next dozen they produce."