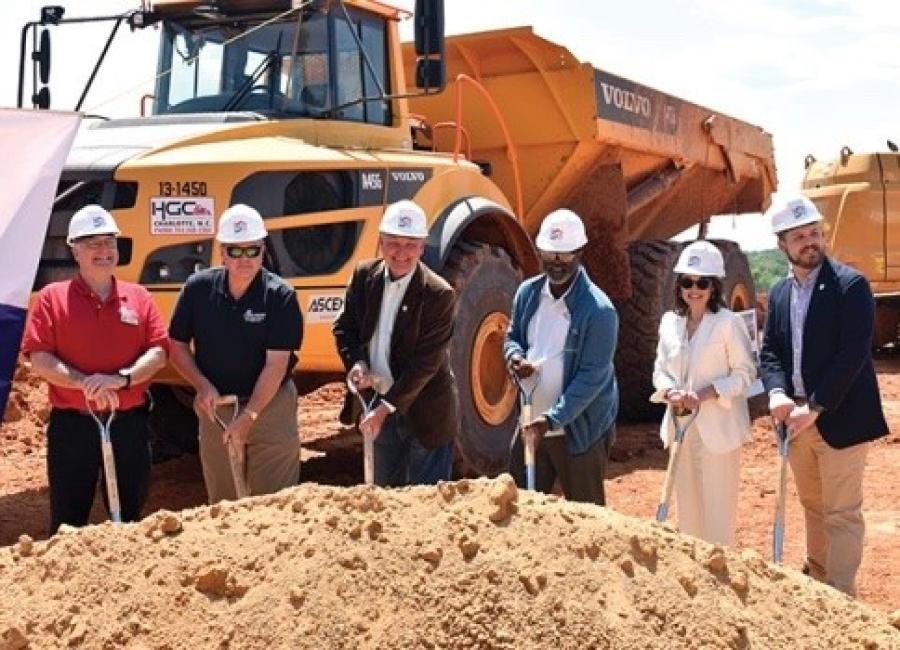 Standing under a large white tent with excavators and acres of red dirt behind him, North Carolina State Sen. Carl Ford, R-Rowan County, told an assembly of people on April 28 about the change his family has experienced over the years in the small community of China Grove.

"I've lived here all my life," he explained. "Right here in the middle of the interstate is where my great grandfather lived. He was moved twice when they built [U.S. Highway] 29, and then when they built I-85."

Ford was on hand to celebrate even more change coming to the town of several thousand in southern Rowan County, 35 mi. north of Charlotte, as local and state leaders as well as representatives from Macy's, ceremoniously broke ground on the retailer's new 1.4 million-sq.-ft. fulfillment center.

The Silverman Group, a national real estate development firm, is a partner in the development.

"We appreciate you and the jobs you're going to bring," Ford said to Macy's at the event. "We'll be glad to see the dust settle, literally and figuratively. It's going to be great to have y'all here."

The retailer has said it would invest $584 million in the facility, which will be located off I-85's Exit 68 at the freeway's intersection with U.S. 152.

Facility Designed to Be Macy's ‘Most Automated'

Scott Shelton, vice president of the Rowan Economic Development Council (EDC), called the employment figures and the total investment "surreal." When he joined the Rowan EDC in 2009, he said the idea of a company like Macy's choosing Rowan County was unthinkable.

"We knew that things would get better, but I don't think any of us could have envisioned we'd be here today, years later, talking about an iconic company like Macy's coming to Rowan County," Shelton explained.

While acknowledging China Grove's proximity to Greensboro and Charlotte, via I-85, made it an attractive place to build a fulfillment center, Kenny Flowers with the North Carolina Department of Commerce called Macy's arrival as a "victory for rural North Carolina" during the ceremony, the Salisbury news source reported.

Macy's projects the center to be operable by late 2024. Once constructed, the Post noted, the facility will be the "most-automated" building in the company's network, said Jodi Buhrman, vice president of supply chain for the retailer. Rather than having employees walking back and forth across the facility floor to retrieve merchandise, the products will be brought to them by mechanical or robotic means.

But that does not mean the facility will not need several thousand people to operate efficiently, she explained.

"Because of the variety of products we have, there will still be some manual process," Buhrman said.

When the facility is fully operational, it will account for 30 percent of Macy's total digital volume, the company added.

Officials in the county went all in landing the retail giant, according to the Post.

Rowan County and the town of China Grove are providing Macy's with approximately $50 million in tax incentives by returning 80 percent of new taxes paid by the company for 15 years. In addition, the county and town will keep $6.8 million and $5.6 million, respectively, in tax revenue during the incentive period, the newspaper reported.

Ford said, however, that securing state-level incentives for the agreement was a challenging task.

"Rep. [Harry] Warren, [R-Rowan County], myself and others, boy did we twist arms," he explained. "This is one of the hardest ones we've worked on to make sure it happened and have it on time and have it just right."

State incentives for the project total just above $11 million.

Ford told the Post that he does not believe Macy's will be the last major company to break ground and bring change to the area.

"We're going to get a lot more things in Rowan County," he predicted.