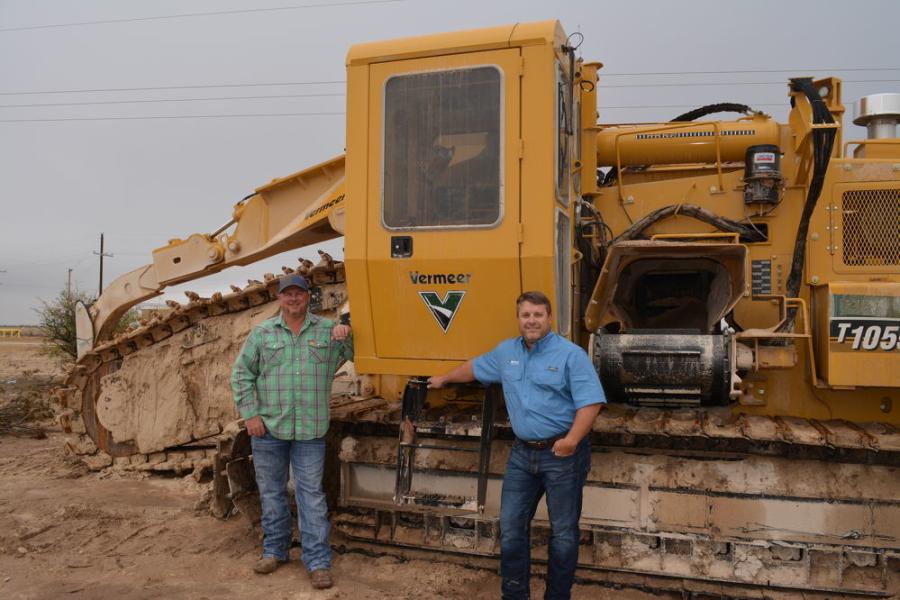 When cutting trenches for new pipelines in the Permian Basin, caliche rock combined with daunting oil company deadlines pose challenges to even the most seasoned trenching companies — so how would a relative newcomer to trenching work tackle the job? 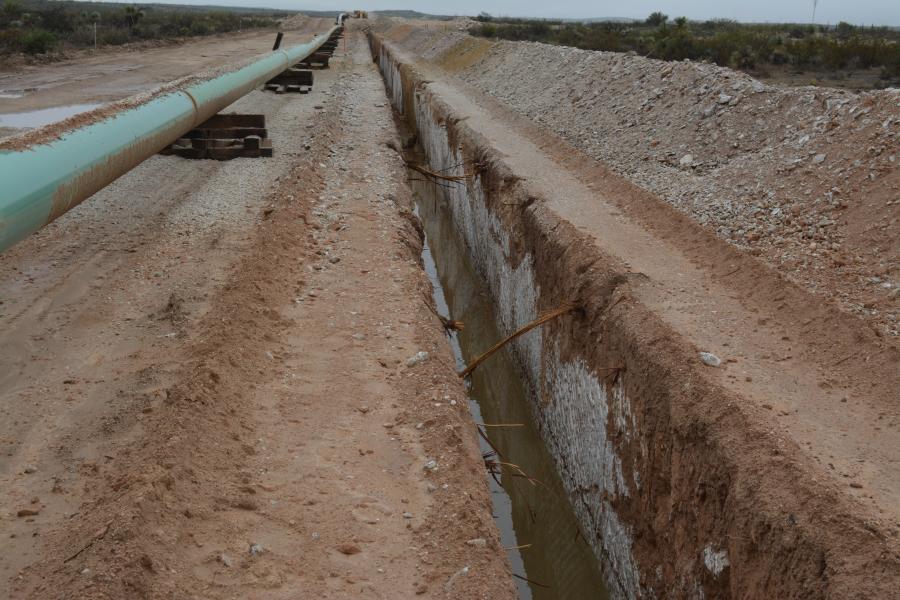 "We are out there cutting through caliche rock at a rate of 2,000 feet per day … faster than a lot of competitors," said Stephen Elliott, superintendent and part owner of Hugo Construction. By way of comparison, when trenching through normal soil conditions, the company can cut 4,000 ft. per day, he added.

The San Antonio-based start-up, launched in early 2018 by brothers Clay, Charlie, Colt Bush and Operating Partner Stephen Elliott, have meteorically established themselves as a "go-to" trenching company in the great (and highly competitive) state of Texas.

Recently, Hugo completed a 20-mile trench along the Texas-New Mexico border, near Orla, Texas, that will accommodate a 16-in. steel gas pipeline midway between Pecos, Texas, and Carlsbad, N.M. Hugo cut the trench 30-in wide and 5 ft. deep. This particular job was a lateral line, but Elliot said he is comfortable cutting main lines at a width of 42-in. 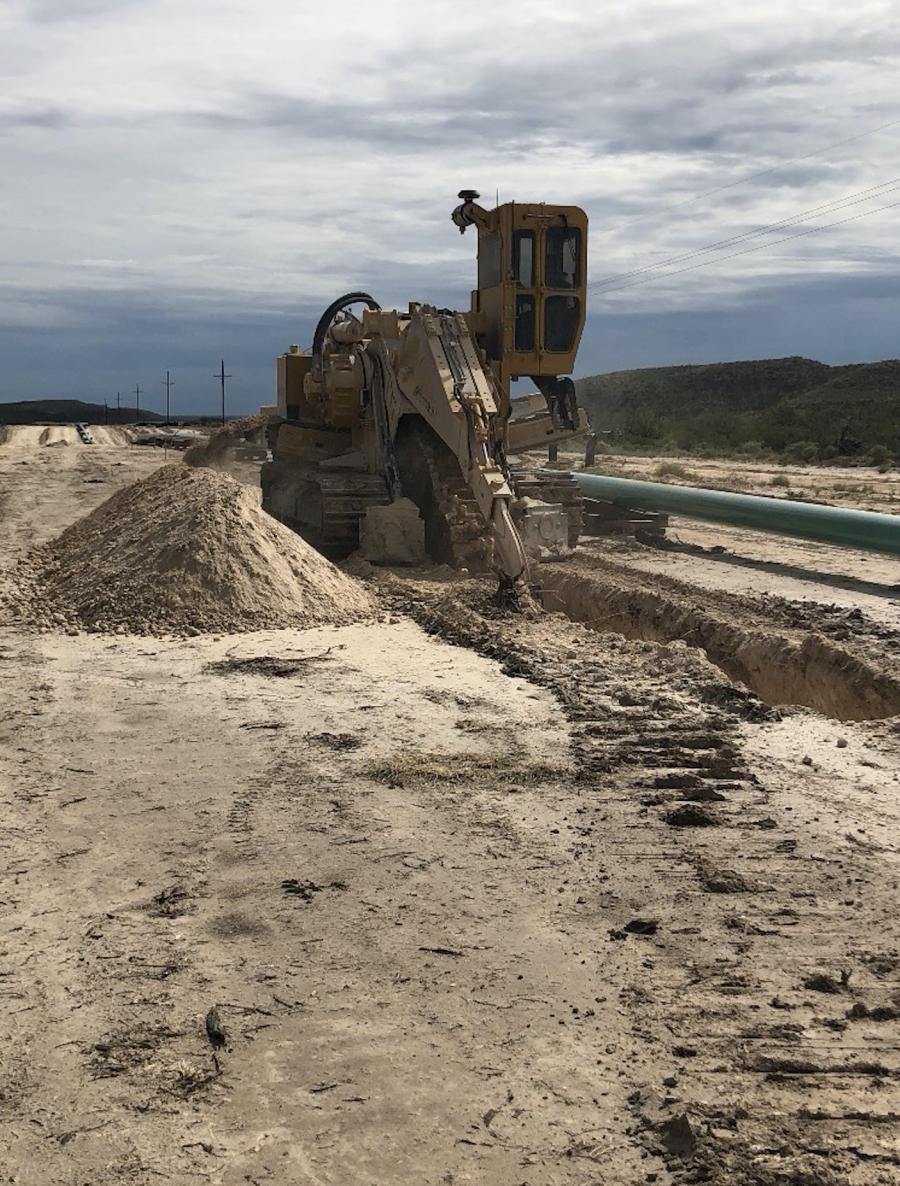 The latest cut was typical for Hugo — it encountered caliche rock most of the way. Caliche is common in the Permian basin, especially in New Mexico. The "dirt" is an accumulation of calcium carbonate that hardens like rock and makes up a sizable amount of the soil in the dryer regions of the southwest. Typically, it's found just below the surface of the ground.

Prior to forming Hugo Construction, Elliott had experience in the oilfield, although not specifically in trenching. He and his partners knew just enough about trenching to know that they needed to talk to the local Vermeer dealer, Vermeer Texas-Louisiana located in Selma, Texas.

"That was one of the most interesting days of my Vermeer Texas-Louisiana career," said May. "It's not every day you have someone you've never met before tell you they want to buy two new machines especially over $1.2 million each."

"We just knew that we wanted Vermeer," Elliott said. "It is the name in trenching and we wanted to go with the best. When I think of Vermeer, I think top-shelf. We didn't even consider another manufacturer. We bought two T1055III machines and we rented a T955III. We also have another T1055 on order."

That's proven to be a smart decision so far, according to Elliott.

"We haven't had have a lot of down time, because our [Vermeer] equipment is new," he said. "About the only issue we have is that we do run into granite sometimes out here, and when we do, we change a lot of teeth. But that's to be expected.

Elliott added that changing four to five teeth per day when cutting through hard rock is prudent; otherwise, he could wind up needing to change 30 at one time, which would take hours to do.

"We have three brand new Vermeer machines and one on order," he said. "No one out here has that amount of new machinery. You'll get less down time with Hugo because of that. Vermeer Texas-Louisiana also always answers the phone … they are always there for me when I need them."

In addition to ensuring its customers are back up and running when its equipment needs servicing, Vermeer Texas-Louisiana offers other important services, too. 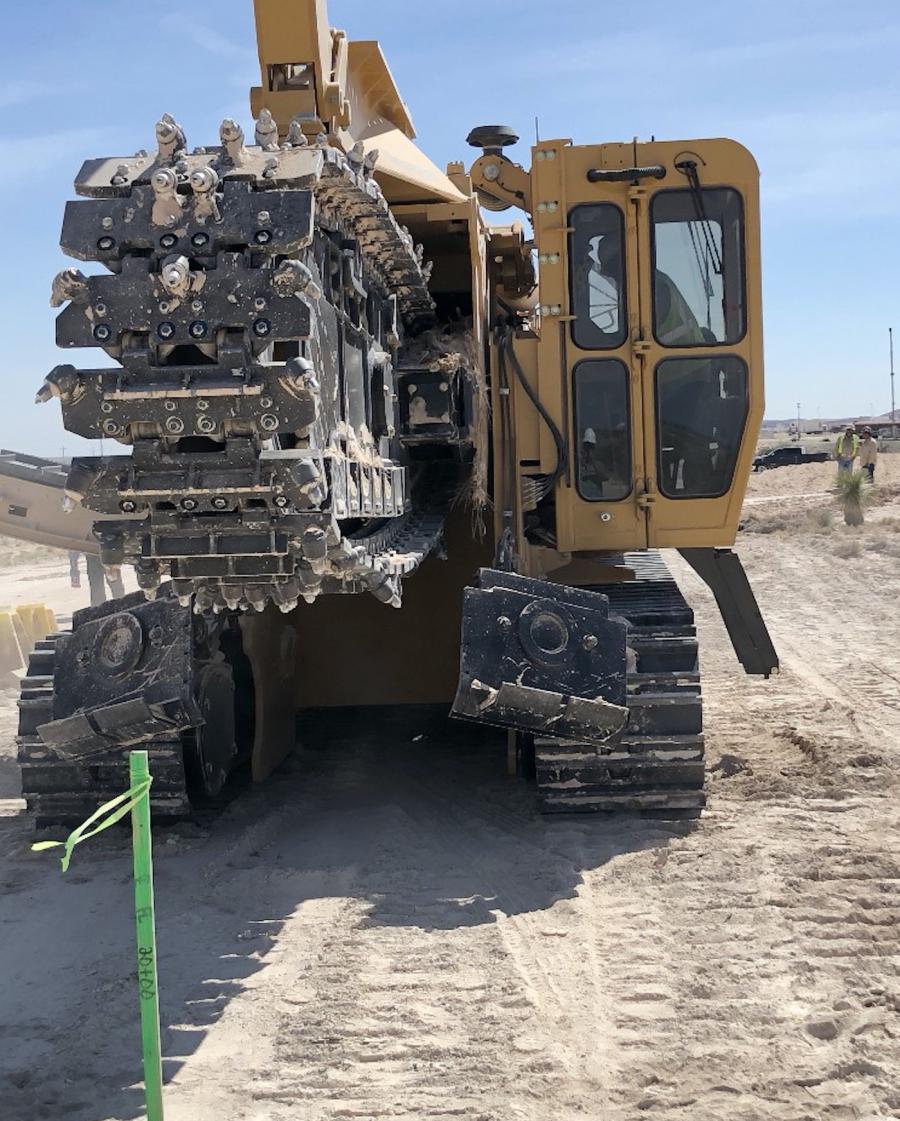 "Safety is our number-one priority when it comes to trenching, HDD, or anything else we do. So training is hugely important, and we offer all the training an operator needs," May said.

That commitment to safety is demonstrated by Vermeer engineering both the T955 and T1055 with in cab operator's presence among some of the safety features. The machine being hydrostatic helps with safety, uptime, and maintenance without costly repairs due to clutch issues.

On this pipeline trenching job, Hugo Construction is working for Courtney Construction of Carthage, Texas. Anadarko, among the world's largest independent oil and natural gas exploration and production companies, is responsible for the pipeline itself. Every oil rig has three pipelines associated with it — saltwater, gas and oil — and every pipeline contractor subs out the trenching and boring. For its work, Hugo, in turn, uses Southern Transport of Midland, Texas, for its transport needs.

Hugo Construction has a lot going on in addition to the Anadarko work.

"We are currently on three jobs," said Elliott. "One of the jobs has three lines, so we are busy. And we're also looking into getting in to the padding business."

Hugo Construction is a division of the K3 group of San Antonio — a food services, remote site management and disaster relief contractor, which among its plethora of recent work, housed 500 linesman on three-story floating dormitory vessels to assist with restoring power to Puerto Rico in aftermath of Hurricane Maria. Elliott also is the director of maintenance for K3.

The T1055 can perform rock excavation effectively with minimal chain wear due to its low-speed, high-torque, splined headshaft motor. It can be adjusted to trench depths using an optional sectionalized trencher boom. It offers 415 gross hp. and provides width ranges of 166 to 122-in.

The T955 boasts less wear due to its low-speed, high torque, splined headshaft motor. It reduces trencher teeth inspection and replacement maintenance time through an optional remote attachment control that can start or stop the engine, raise or lower the trencher boom and rotate chain at a slow speed. The T955 promotes high-volume spoil removal with an extra-wide 30-in. dirt conveyor opening that helps reduce jamming. Like the T1055, the T955 also provides 415 gross hp. but offers a width range of 114 in.