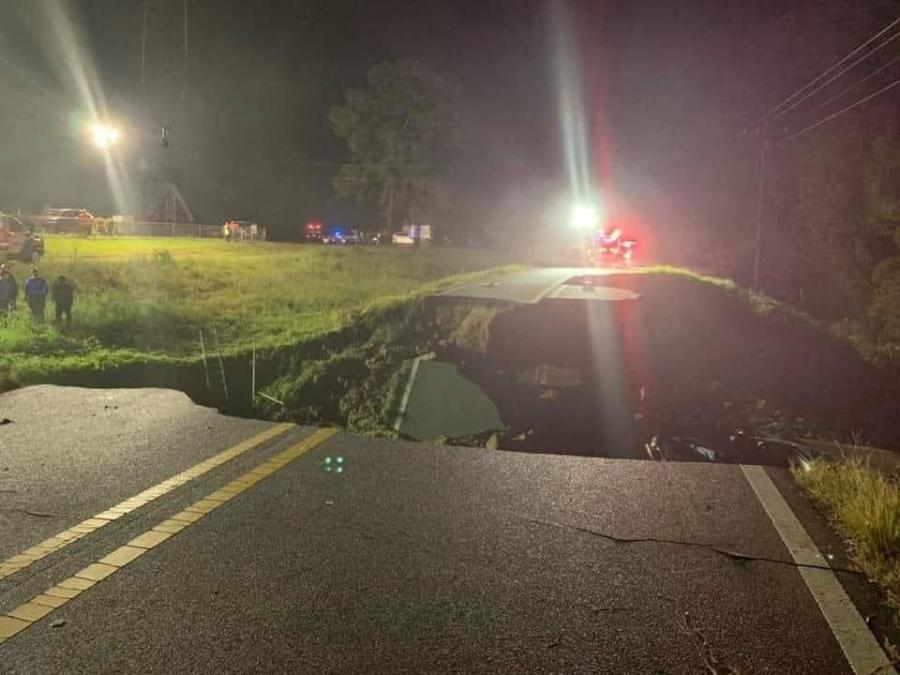 Seven vehicles plunged into a giant sink hole following the failure of the roadway, all of which were retrieved by the next morning, near the Benndale community in the southeastern part of the state. (MHP Troop K. photo)

The collapse happened around 11 p.m., local time, according to the Jackson Clarion Ledger.

Seven vehicles plunged into a giant sink hole following the failure of the roadway, all of which were retrieved by the next morning, near the Benndale community in the southeastern part of the state.

The accident happened on a rural stretch of Highway 26 west of Lucedale, about 60 mi. northeast of Biloxi. Both the east and westbound lanes collapsed, according to the Associated Press. The highway is a major route that runs between George and Pearl River counties.

An estimated 75-ft. span of the roadway collapsed, sending cars plunging into the hole that was 20- to 30-ft. deep. Cranes, ladders and ropes were used to help rescue workers get down to the vehicles that slid in, said Ken Flanagan, a George County spokesperson.

"It must have been a terrifying ordeal for the drivers," Flanagan told McClatchy News. "They were traveling on Highway 26. It was raining at the time. This is a particularly dark stretch of state highway, and unbeknownst to them, they just drove right into a huge ditch."

According to witnesses, the road just collapsed from all the rain. "At several spots, the cars were literally stacked on top of each other as they were driving, not realizing what was in front of them. So, there were wrecks on top of wrecks."

According to Flanagan, the area where the collapse occurred is not prone to flooding, making it a "very unusual spot for a washout of this size."

But Hurricane Ida brought unusual amounts of rain to the Mississippi Gulf Coast Monday, as evidence from a nearby community rain gauge that measured more than 11 in. of precipitation.

"At sunset yesterday it felt as though Hurricane Ida's effects were over," Flanagan told the Sun Herald. "But there has just been so much rain and water that we are really seeing her true devastation here after the fact."

The highway remained closed to thru traffic as of press time, with MHP re-routing drivers to Mississippi Highway 57 or Highway 63.

"While we are still in the early stages of this investigation, motorists can expect Highway 26 to be closed at this location until further notice," noted a Facebook post from MHP Troop K. "The Mississippi Department of Transportation will assess the damages and make a determination as to when the roadway will reopen for travel."

"We're trying to advise people with any type of damage to call their local emergency management services," she said.