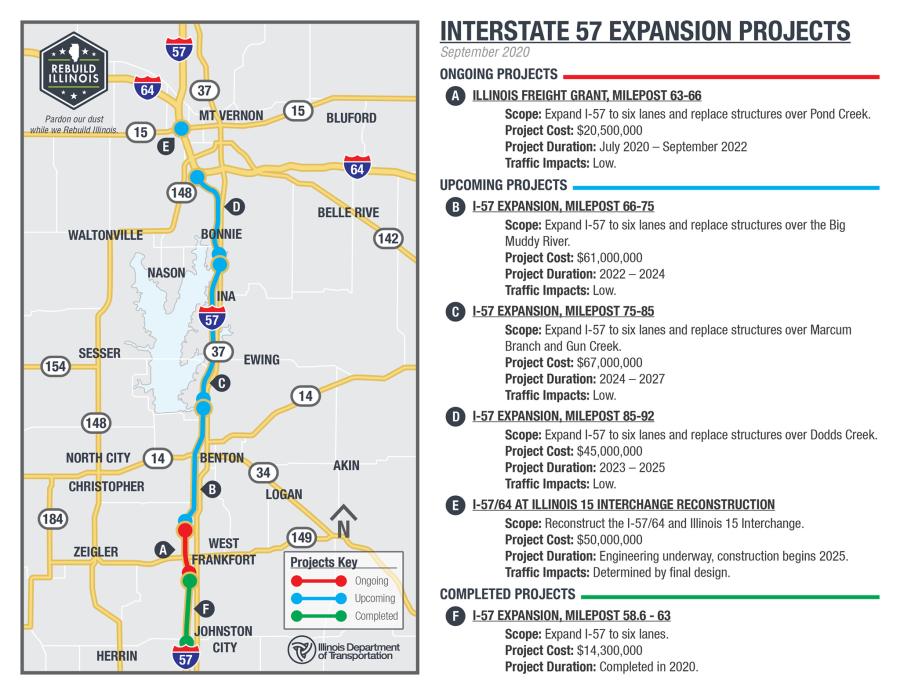 The Illinois Department of Transportation on Sept. 28 announced the ongoing and future expansion of Interstate 57 from Mount Vernon to Johnston City highlights a commitment to improve safety, reduce congestion and encourage economic growth throughout the region. The project is separated into six segments, representing a total investment of $257.8 million for southern Illinois, with $224 million coming from the Rebuild Illinois capital program.

"With the Rebuild Illinois capital plan, Illinois isn't just making temporary repairs and patching up existing infrastructure, it's investing for the future," said Gov. J.B. Pritzker. "Rebuild Illinois is the beginning of an effort to improve and replace roads and bridges and provide jobs throughout the entire state. By undertaking the I-57 expansion and other projects in the years to come, IDOT will ultimately create safer roads for Jefferson, Franklin and Williamson counties."

Five of the six I-57 expansion segments are ongoing or upcoming, with one already completed. Each segment includes widening I-57 to three lanes in each direction and replacing key bridges.

In addition, later this year IDOT is embarking on a major renovation of the Trail of Tears rest areas on I-57 in Union County, which includes greatly expanding and enhancing truck parking.

"Across the nation, highway construction and maintenance continue as essential infrastructure activities. Illinois is no different," said Omer Osman, acting Illinois transportation secretary. "These projects represent a significant investment in Jefferson, Franklin and Williamson counties that will improve safety, mobility and create economic opportunity for years to come on one of the country's critical freight and travel corridors."

Over the next six years, IDOT is planning to improve more than 3,300 mi. of highway and 8.4 million sq. ft. of bridge deck as part of the Rebuild Illinois capital program, which is investing $33.2 billion into all modes of transportation. Year One included approximately $2.7 billion of improvements statewide on 1,706 mi. of highway, 128 bridges and 228 additional safety improvements.