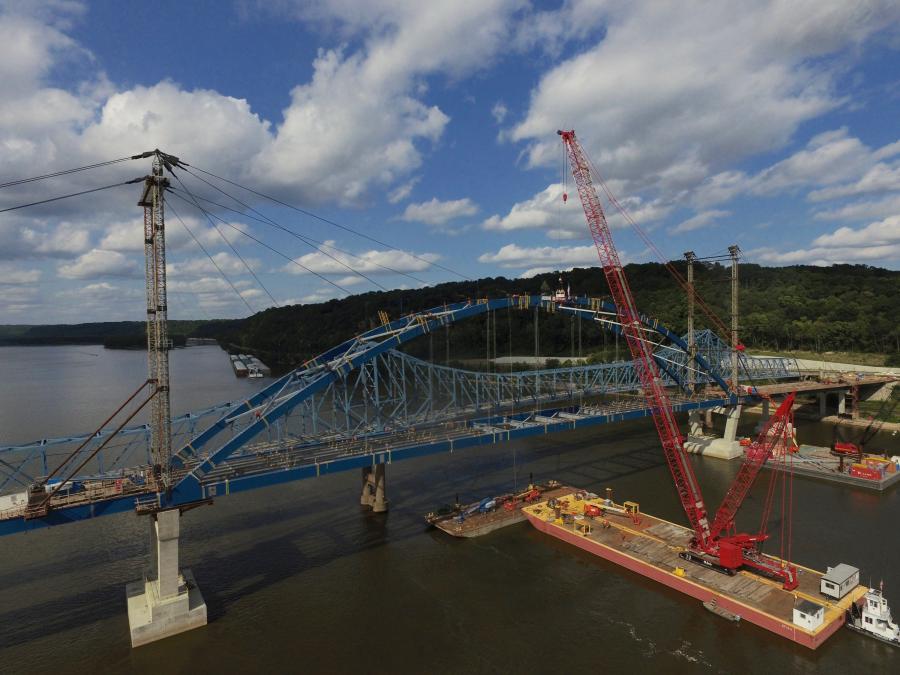 Kraemer North America started work on the project —to build and then demolish the existing bridge — in January 2016 and is scheduled to finish the project on May 31, 2018. This project is located approximately 150 mi. west of Chicago, 45 mi. south of Dubuque and 20 mi. north of Clinton. It is located over Pool 13 of the Upper Mississippi River between Savanna, Ill., and Sabula, Iowa.

The work also includes the reconstruction of IL 84 at the north end of Savanna — from Randolph Street on the south to approximately 1,000 ft. north of the bridge structure and part of the Iowa Causeway.

The current two-lane bridge — a through-truss type bridge, is approximately 2,468 ft. between abutments. A unique feature to this structure is the open grated steel deck. The project is being funded by IDOT and IADOT 50/50.

The bridge is rapidly approaching the end of its useful life, according to the project web page, which pointed out that planning for the replacement began in 2011 that dealt with the design and land acquisition for five years. [It] is listed on the National Register of Historic Places (NRHP). The bridge was constructed as a toll bridge by the Savanna-Sabula Bridge Company in 1932 for $750,000. The state of Illinois took over jurisdiction from Iowa of the bridge in 1987 and is the lead agency on any repairs or replacement.

“Over the years, a number of repairs have been made to the bridge including major repairs in 1985, minor repairs in 1999 and a partial replacement of the grid steel deck in 2008,” said Faith A. Duncan, P.E., acting project engineer, studies and plans, IDOT Region 2/District 2. “In 2009 it was determined the Iowa approach needed to be replaced at the cost of $6 million and an additional $2 million to replace the reminder of the steel deck. These repairs would require another closure for nine months. It was at this time, consideration was given to the replacement of the entire structure instead of investing more money on costly repairs that would not significantly extend the service life of the structure.

“The Iowa side approach structure needs to be replaced and the entire U.S. 52 bridge is functionally obsolete having no shoulders and only 10 feet wide traffic lanes,” she said. “The intersection of U.S. 52 with IL 84 is geometrically deficient and has substandard geometrics for semi-trailer turning movements. From the beginning the project was expedited in hopes of avoiding costly repairs.”

On a daily basis the bridge carries 2,400 vehicles per day. The new bridge, a tied arch structure composed of two 12-ft. lanes and two 8-ft. shoulders, which will accommodate bicycle traffic, is anticipated to carry the same amount of traffic.

“The proposed structure's life span will be 75 to 100 years,” said Duncan. “The existing structure is beyond its useful life and could not remain in place due to the alignment of piers, which would have restricted the width of the navigational channel. BNSF Railway runs along the river and is the second largest freight railroad in North America. The vast majority of their lines run west of the Mississippi River. At our project location there are two tracks which are heavily used, approximately 60 plus trains per-day. The railroad advised us there would be minimal closure windows for construction activities. The contract had to cross the track every day to access the Illinois side of the river.

“The Mississippi Palisades State Park is outside our project limits but it had to be taken due to the sheer number of visitors,” she said. “Maintaining traffic along IL 84 was crucial. The project is located within the Upper Mississippi River Region and is composed of a series of locks and dams. The Coast Guard advised us there would be very minimal closure opportunities for construction activities and we must maintain a minimum construction navigational width.”

The land surrounding the causeway is part of the National Fish and Wildlife Refuge. It is federally protected land and any disturbance within the area, including within IDOT's right-of-way required coordination.

“Coordination on this project was extensive,” said Duncan. “We coordinated early and often with federal, state, local and private Agencies. On this project, we were exceptionally lucky; we had buy-in from every single agency and partner.”

Parsons Transportation Group based in Chicago assisted IDOT with Phase I (study) and Phase II (design).

“The community has been very supportive of the bridge replacement project,” said Duncan. “We made commitments to the community there would be very minimal construction delays to traffic and no closures. To avoid closures the proposed structure was placed on a new alignment about 100-ft. to the south.”

With each interim completion date associated to date, Kraemer North America has either met or completed early with the anticipation of meeting the contract completion date. As of Nov. 7, Kraemer has completed the new bridge, with the ribbon cutting ceremony taking place on Nov. 17. The challenges of building a bridge over the Mississippi River have been met by a resilient work force that focused on the work in front of them, even throughout numerous floods that have affected the project area.

“Numerous floods throughout the course of the project that either prevented the crews from being able to work as the causeway was under water or unable to hold the barges into position because of the flow,” said Pat Shea, Kraemer's project manager. “When the water receded and crews were able to work on a task, cranes were positioned at each pier to facilitate the piers being built at multiple locations while the water levels were conducive. The new bridge had to be completed prior to the demolition of the old so as not to impact traffic, as the detour if the bridge were to close would be at Fulton, Ill., or Bellevue, Iowa, resulting in a major impact to the traveling public.”

Working on the Mississippi is not easy, especially with the current and changes to water levels.

“All employees while working on or near the water are required to wear life jackets,” said Shea. “We have numerous boats for moving equipment and personnel that have various throw rings etc. We were fortunate to have a fairly mild winter last year; however, because of the schedule, we have to work year round. Multiple barges with cranes and material were used to build the substructure. The Miss Kara has been our primary tug boat used to push barges around, however, a backup boat was present for days when multiple moves occurred. Barges are a necessity while working on the river to move the equipment and material to each item of work. Divers have been used on an as needed basis primarily while working on the coffer cells and will again be used during demo of the old bridge.”

Measures are being taken to protect the environment during the construction.

“A turbidity barrier has been placed throughout the project to ensure no sediment or debris leaves the project,” said Shea. “The contract also required all trees to be removed and demo complete between Oct. 1 and March 31 to avoid any impacts to the little brown and northern long eared bats.”

Continued coordination with the railroad has occurred throughout the project to ensure safe passage of trains through work zone.

Kraemer is recycling as much material as possible, with all the structural steel from the old bridge being recycled.

Kraemer has worked with all the subcontractors listed on previous projects within the Illinois/Iowa region.

Kraemer and subcontractors used and own a variety of equipment on this project, including Cat excavators and loaders; Manitowoc, Link-Belt, Grove and American cranes; Bauer drill rigs; Bidwell finishing machines; and JLG manlifts.

The company has one on-site mechanic/utility operator, and can easily bring in additional mechanics from its shop in Plain Wis., about 100 miles from the bridge.

“Cranes are the focal point in Kraemer's equipment fleet, on which many moving parts like cables, sheaves, drums, and clutches experience regular wear and tear and require regular routine inspection and maintenance for safe operation,” said Shea. “Typically the routine repairs can be done by our experienced mechanics within a day or two to get a crane back in operation. We constantly monitor river levels, keep equipment on barges and have mostly been able to avoid damage to equipment in times of flood, Most routine maintenance and unexpected repairs need to be done on site due to the high cost of equipment mobilization. To fuel all of our equipment on site we brought in a large fuel barrel that is refueled weekly along with some of the heavier equipment [cranes, loaders, etc.] by a fuel truck. Our onsite utility operator/mechanic organizes and maintains a storage container with all of the necessary fluids and oils for onsite equipment maintenance.”

Todd Parr has been the utility operator and onsite mechanic for the duration of the project.

“He is one of Kraemer's most experienced operators and has played a vital role keeping the equipment going,” said Shea. “Glenn Bauer travels from our Plain, Wisconsin, yard when more extensive repairs are required.”

To facilitate the arch erection Kraemer rented an MLC300 VPC Max from Central Crane, a division of ALL Family of Companies.

Kraemer purchases equipment from dealers such as Hayden Murphy, ALL Family of Companies,

“Dealership networks are maintained throughout the country,” said Shea, “however when working in specific markets is it important to establish relationships near each project to ensure prompt service and eliminate downtime.”

Shea is impressed with the work of the original bridge builders and the effort by all stakeholders to build a new bridge and road network that will serve the states and local area for decades.

“The states of Illinois and Iowa, designers, contractors and all employees involved in the building of this bridge were able to work together for the common goal of a final product that will stand for numerous years and serve the adjacent communities well,” he said. “The opportunity for all of us to be involved with building a structure across the Mississippi River does not present itself often, so we all should be proud to be involved with such a project.”