Illinois had gone 736 days without a budget, and the final seven packed in plenty of statehouse drama. 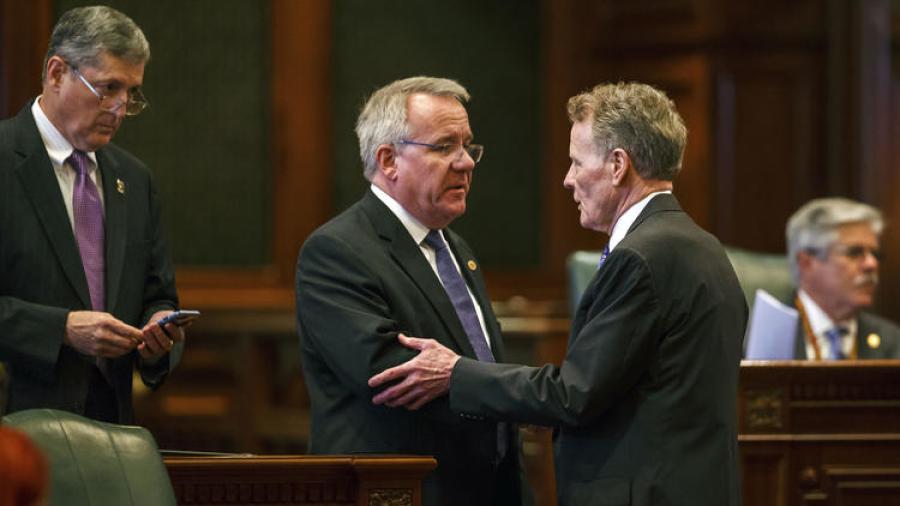 SPRINGFIELD — Seeking to restore stability to a state government teetering on the abyss, lawmakers on Thursday turned aside Republican Gov. Bruce Rauner's opposition to a major income tax increase and a spending plan, ending a record-setting impasse.

Illinois had gone 736 days without a budget, and the final seven packed in plenty of statehouse drama. Tempers flared, threats were issued, alliances shifted. A surprise tax hike vote over a long holiday weekend was met with a quick veto by a governor who'd dug in his heels. Lawmakers, though, stood their ground, with members of both parties coming together long enough to override.

Even that final vote was not without delay, however, as the Capitol was locked down for two hours after a hazardous materials team went in to test white powder that was thrown into the reception area of the governor's office.

Tests proved negative, even as a woman was taken in for questioning after being handcuffed. When the session got underway, House Speaker Michael Madigan's Democrats were joined by about one-fifth of House Republicans, who broke ranks with Rauner. As a result, the state income tax rate will rise from 3.75 percent to 4.95 percent, costing an extra $1,200 a year for a family with a net income of $100,000.

Madigan, speaker for all but two years since 1983, had outflanked Rauner, who'd staked his first term as governor on trading a tax hike for an agenda he hoped would jump-start Illinois' economy.

Following the vote, Madigan praised Republicans who voted for the override, saying the budget agreement showed what was possible "when legislators on both sides of the aisle looked beyond partisan differences and put the best interest of our state and its residents first."

"The people in this chamber did not do what was easy today," Madigan said. "But we did what was right for the future of our state."

Rauner, who a day earlier said his team was "doing everything that we can" to block an override, issued a statement Thursday blasting "Speaker Madigan's 32 percent permanent income tax (rate) hike."

"Today was another step in Illinois' never-ending tragic trail of tax hikes," Rauner said. "Now more than ever, the people of Illinois must fight for change that will help us create a brighter future."

The stakes were high ahead of Thursday's votes. The state's bill backlog topped $15 billion, with small businesses throughout the state owed money. Wall Street had threatened to downgrade the state's credit rating to junk status, a distinction that could still happen. Schools and public universities needed to know if money was coming before starting back up.

With the budget now law, the Illinois Department of Transportation announced that road contractors can resume working on projects that were suspended days earlier. And the Illinois Lottery announced Mega Millions ticket sales had resumed and the agency has requested that it be allowed to resume sales of Powerball tickets.

The House vote represents a setback for Rauner. Back in April 2015, less than two months before the impasse started, Rauner suggested he could leverage a state budget crisis to win approval of his economic agenda.

"Crisis creates opportunity," Rauner told the Chicago Tribune editorial board. "Crisis creates leverage to change ... and we've got to use that leverage of the crisis to force structural change."

The Springfield impasse did create a budget crisis, and for two years, Rauner kept Republicans unified. In the end, however, the intense pressure that built up led 15 House Republicans to crack, and they joined with Democrats on Sunday to vote for a tax hike and spending plan. Rauner's last, best chance to block a tax hike was for the override vote in the House to fail.

By Thursday, just 10 Republicans voted to override their governor. The GOP lawmakers that jumped off the proposal cited talks with constituents.

"The more than one thousand calls, emails and Facebook messages I have received have been about 10-to-1 opposed to any more taxes. The message from my constituents has been loud and clear that they do not want a tax increase so I had to oppose this plan with a permanent tax increase," Rep. John Cavaletto, R-Salem, said in a statement.

While the tax increase initially passed Sunday with 72 votes, that number fell to 71 on Thursday — the bare minimum needed for an override. To make up for the Republicans who changed their minds, four Democrats who earlier had opposed the tax hike now voted to override Rauner.

When it looked like the fight between Rauner and Madigan would stretch on throughout the summer without end, rank-and-file lawmakers pressed their leaders to get something done. They shared their frustrations about the impact of the stalemate on their universities and home towns in meetings across dinner tables and in quiet corners of the Capitol. That effort culminated Thursday.

"I believe it's a historic day because it's a day where we decide the fate of our state," said Rep. Steve Andersson, a Republican from Geneva who voted for the tax hike and override. "Do we want to save it? Or do we want to let it go into meltdown?"

While Rauner had said he could support a tax hike, it came with a list of conditions. That included a property tax freeze and an overhaul of the workers compensation system to cut costs on businesses.

Still, an override of his veto could prove politically beneficial for Rauner in two ways. It breaks the budget impasse, allowing state spending to return closer to normal and relieves some pressure, even if it wouldn't repair all the damage done during the stalemate. AndAs he seeks re-election next year, he can blame the outcome on Madigan's power and the "Chicago Machine," playing into the geographic politics that divides the state.

Meanwhile, the Illinois Republican Party, which Rauner heavily funds, released a statement that attacked Democrats and suggested primary opponents could await GOP lawmakers who broke with the governor.

"After all we have accomplished together, it is astonishing that these legislators would now turn their backs on taxpayers across the state," the statement from party Chairman Tim Schneider read in part. "I am confident voters will hold those politicians accountable for choosing Mike Madigan over the people of Illinois."

Republican Rep. Reggie Phillips of Charleston sought to portray his vote in favor of the override as simply in his district's best interests.

"If I decide to press my button to override the governor, it doesn't make me any less of a conservative Republican than the rest of the people standing here," said Phillips, whose district includes Eastern Illinois University, which has struggled to make ends meet with reduced state funding during the impasse. "It makes a person decide he has to vote for his district. He has to think about all the people in his district to the best of his ability."

While the biggest point of contention centers on the tax hike in the spending plan, much of the final product came about after months of bipartisan negotiations. While the sides ultimately were unable to reach an agreement that Rauner could support, Republican influence kept the tax rate lower than Democrats initially called for and led to widespread spending reductions.

The budget package calls for spending $36.1 billion in the coming year, which is less than the $39 billion that's currently going out the door due to a patchwork of court orders and laws that's left state government to spend billions more than it takes in each year. Supporters said the plan includes $2.5 billion in spending cuts, including 5 percent across-the-board reductions to most state agencies and a 10 percent cut to higher education.

The personal income tax rate goes from 3.75 percent to 4.95 percent, which is expected to generate roughly $4.3 billion. A rise in the corporate income tax rate from 5.25 percent to 7 percent would bring in another $460 million. The research-and-development tax credit would be reinstated, and the earned income tax credit for low-income families would be increased. The law also ends several corporate tax breaks, including those for companies that operate on the continental shelves or shift production out of state.

Lawmakers said the budget includes enough surplus revenue to support roughly $3 billion in borrowing, which could be used to generate a total of $8 billion in extra cash to pay down debts. That's because the state receives federal money when it makes some Medicaid payments.

Funding for elementary and high schools would be boosted by $350 million, but the entire K-12 portion of the budget is contingent upon a separate bill that changes the formula for doling out state dollars to schools. Democrats passed that legislation but have yet to send it to Rauner, who's called it a Chicago "bailout" and threatened to veto it.

Also buried in the budget plan is a measure pushed by Mayor Rahm Emanuel to shore up two city worker pension funds, which the governor had vetoed when lawmakers passed it as a stand alone bill earlier this year.

The budget also assumes $500 million in savings from pension changes long-sought by Rauner to create a defined-contribution 401(k)-style retirement plan to compete with the defined-benefit pension plans currently offered to state employees.

State pension systems would be allowed to create a hybrid of the two types of retirement plans, which newly hired state employees, including teachers, could choose as an alternative to the existing system. Employees would contribute 6.2 percent toward the pension-style portion and a minimum of 4 percent toward the 401(k)-style portion. Local employers rather than the state would be responsible for paying the employer share of the plan, and the state would make a 2 percent contribution.

But the legislation doesn't specify an implementation date, instead directing each of the pension systems to do so, which could take some time. Rauner has argued those savings should not be counted on in the budget, even though he's used similar accounting in his past spending proposals.

Thursday's vote puts House Democrats at some risk next year, and that's why Madigan's decision to override Rauner's veto wasn't always a sure bet.

In May, Madigan privately told Democrats that if a budget package passed, there would be no override, some Democrats said. The speaker figured Democrats would get hammered in next year's election by campaign spending from Rauner and his wealthy allies. Then, after the Senate's Democratic-led override of Rauner's veto on Tuesday, Madigan told members he was torn, they said.

In the end, Madigan allowed the House override votes to proceed. There was internal pressure, as House Democrats already on the hook for a tax-hike vote wanted to move forward, advancing policy over politics. And the speaker also could point to the 15 House Republicans who voted for the tax hike as political cover.

Still, raising taxes to get a budget is a major political issue. Rauner can continue to assail Democrats for backing tax increases without the accompanying pro-business changes the Republican chief executive sought.

Democrats now have to counter with their explanation: They believe Rauner had no intention to cut a deal with Madigan, and the governor was prepared to sink the state further to try to achieve an agenda that weakened Democratic allies in organized labor and civil trial attorneys.

But wary Democrats know the adage in politics: When you're explaining, you're losing.

"I'm concerned about the same thing," said one Downstate Democrat who asked not to be identified in order to discuss the caucus and Madigan.

"The problem is, I really believe a decision had to be made of us either going to hell to see if (Rauner) would agree to anything, or governing when there was tons of pressure from a good chunk of our caucus to call something," the lawmaker said. "Are you better off running with no budget and the state in shambles and then in August, you've got junk bond status and we're totally busted? I think the calculation is you're better off governing."