In With the New… Out With the Old on Chestatee River 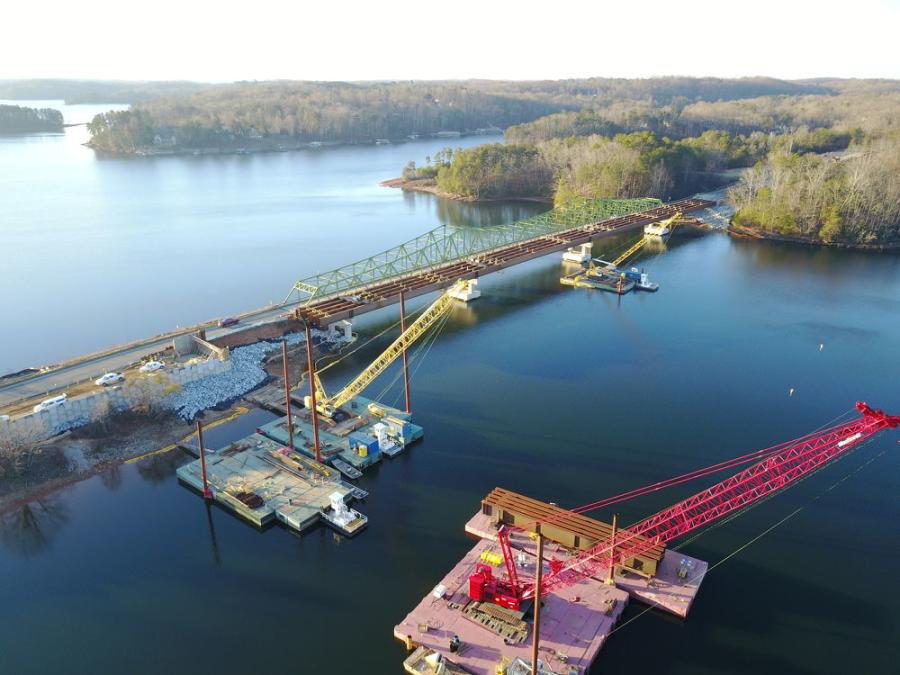 The barges went from one end to the other, drilling the caissons down into the lake bed to the Hall County side. (Scott Bridge photo)

Having completed the Georgia Department of Transportation's (GDOT) new $22 million State Route 53 bridge — the Bolling Bridge — over the Chestatee River (Lake Lanier) last July, vehicles are now using it and the Scott Bridge Company Inc. has started the demolition of the old steel truss bridge (built in 1955/56), which should be completed in October.

In With the New…

The $19.7 million project consisted of a new two lane bridge that is approximately 7.3 mi. west of the city of Gainesville. The work area (0.74 mi. in Forsyth and Hall counties) is approximately 0.39 mi. southwest of the Chestatee River and extends to a point approximately 0.35 mi. northeast of the river. The 987-ft.-long bridge has two 12-ft. lanes with 8-ft. shoulders. The new roadway approaches provide two 12-ft. lanes and 10-ft. shoulders, including a 2-ft. paved section. 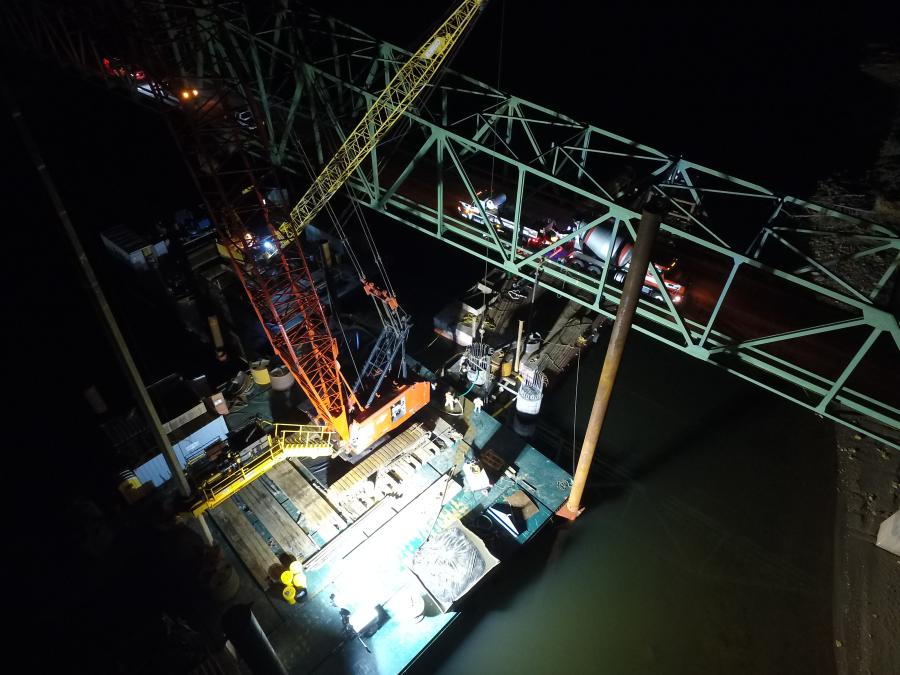 The new bridge construction began in late 2015 and, save for a few days of rain and other weather-related delays, the construction has been non-stop, including several night shifts to pour concrete for the caissons and the deck.

…And Out With the Old

The old bridge was determined to be structurally deficient and was eligible for federal bridge replacement funding. GDOT inspects bridges every two years by Federal regulations.

“If the grading drops below a certain point, it goes on a list as to whether it is more cost efficient to continue maintaining or just replace it. When it falls below that rating, it doesn't mean that it's unsafe. They look at more from maintenance standpoint,” said Derek Wade, GDOT construction manager (Level 4), who was assigned to the project.

A GDOT public document described the state of the old bridge. 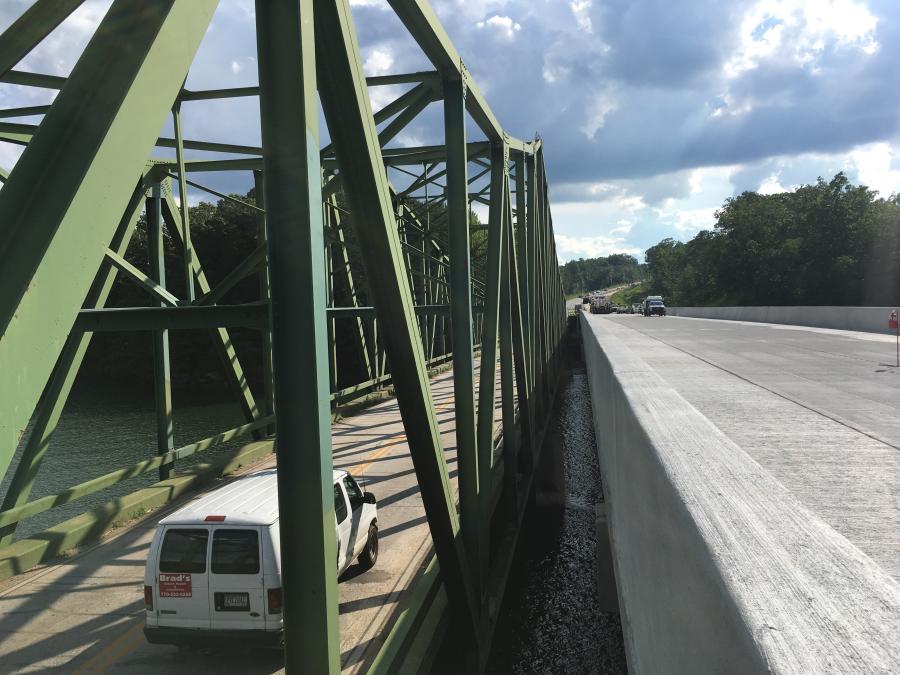 “The existing vertical clearance… is approximately 17 feet above the normal pool elevation of the lake [Elevation 1071 feet],” it noted. “The existing maximum horizontal clearance between bridge piers is approximately 285 feet, between the two center piers. The Bolling Bridge is a fracture critical structure that has been struck by vehicles on numerous occasions due to the low clearance of the overhead steel trusses [15 feet above the bridge deck]. The deck within the main spans is currently six inches thick and is exhibiting transverse and longitudinal cracking, as well as some minor concrete deterioration on the underside of the deck.

“Some of the floor beams and stringers have also experienced minor section loss,” it added. “Swelling of the steel within some of the connection areas between the gusset plates and floor beams has also been observed. All of the sections of the substructure also exhibit minor cracking. Due to the lack of structural integrity of the existing bridge, replacement of this structure is recommended, and repair is infeasible [logistics and engineering].”

The bridge is important to area commuters, with 12,500 vehicles using it daily in 2017.

“It's one of the main arteries coming out of Gainesville over to SR 400 U.S. 19,” said Wade. “The old bridge served its purpose.”

The new footprint was chosen “to maintain traffic during the construction phase, as there are no reasonable detours available to accommodate motorists traveling along SR 53 during the construction period. The replacement bridge would have a minimum vertical clearance of 17 feet above the normal pool elevation of the lake and a maximum horizontal clearance of approximately 250 feet, measured from either side of the central pier to each of the outside piers.”

The GDOT document also noted that “the project area is characterized by U.S. Army Corps of Engineers (USACE) land on each side of the crossing and by nearby parkland and residential development. The USACE parkland east of the Chestatee River crossing is located in Hall County and is known as Little Hall Park. The USACE-owned property west of the crossing in Forsyth County is classified as recreational land and is unofficially known as Bolling Hill Park. The Chestatee River/Lake Lanier is considered a navigable waterway by the USACE.” 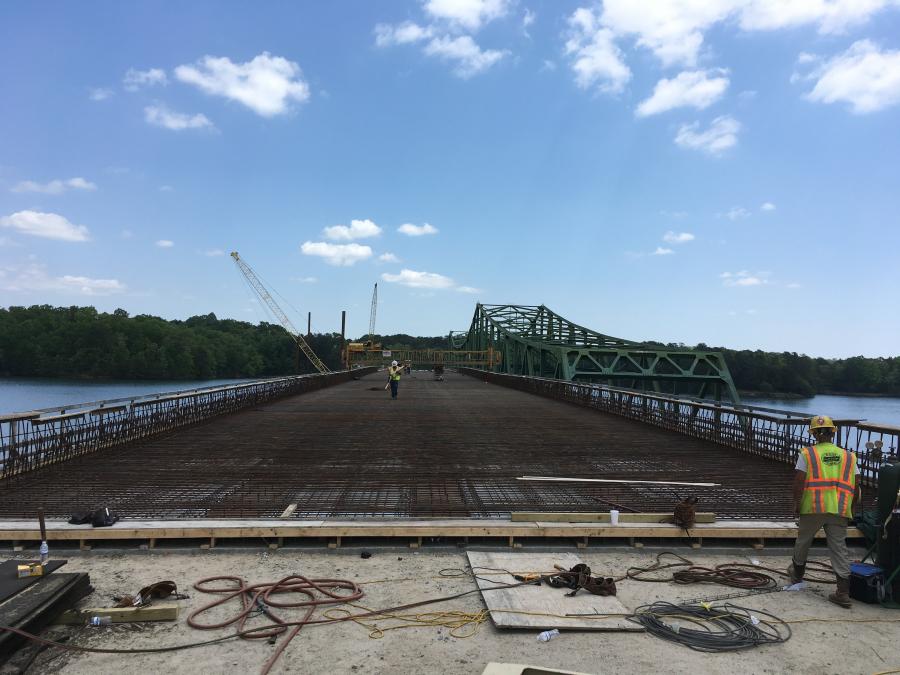 The new bridge, a conventional design based on a steel girder substructure, has no overhead trusses — just a concrete deck and concrete barrier wall on both sides. The centerline of the replacement structure is approximately 68 ft. north of the centerline of the existing bridge.

The bridge, which has 12 caissons, was designed by GDOT and has an expected lifespan of several decades.

“The biggest challenge was the staging — particularly the top portion of it,” said Wade. “We just don't have the room like we normally would to do all the construction at one time. We had to restrict one end of the bridge to complete the construction of the roadway area, shoulders and guardrail section in the last stage before we put traffic in the final configuration on the Hall County side.”

On the environmental side, two nesting platforms for Osprey had to be placed on Lake Lanier.

“The birds built their nests on the peaks of the trusses of the old bridge,” said Wade. “Knowing the old bridge was going away, we manufactured the platforms using telephone poles and placed them with the help of the USACE. The department is environmentally minded and we always try to help our environment anyway we can.”

The bridge construction proceeded well and the project is slightly under budget.

“It's probably one of the smoother operations that I've seen with 25 years in GDOT,” said Wade. “Once they moved in with their barges — they did most of their work off them, it went from one end to the other, drilling the caissons down into the lake bed to the Hall County side. Once the casings, columns, and caps went in, they set up the beams and so forth and poured the deck. It's like putting a puzzle together.”

There were no soil issues, save for one caisson having to exceed the standard depth by 20-ft. plus.

It took nearly 18 months to prepare the bridge so that the top upper structure — steel beams and pouring of the deck — could begin. The second phase took nearly four months to complete. The deck pour was done in nine installments

“We have a very good working relationship with Scott Bridge and are keeping communications lines open. So, when something does come up, we are able to resolve it pretty quickly,” Wade said.

The help of the USACE was essential to the project as it provided a staging area upriver from the work site where materials and equipment could be stored and serve as a laydown yard.

“The work site was a constrained area and they couldn't stockpile a whole lot of materials and had to barge it down to the site,” said Wade.

The demolition started Aug. 14, 2018, with barges placed below the bridge to prevent debris from falling into the water.

During the demolition, Scott Bridge is required to keep one channel open to boat traffic at all times. 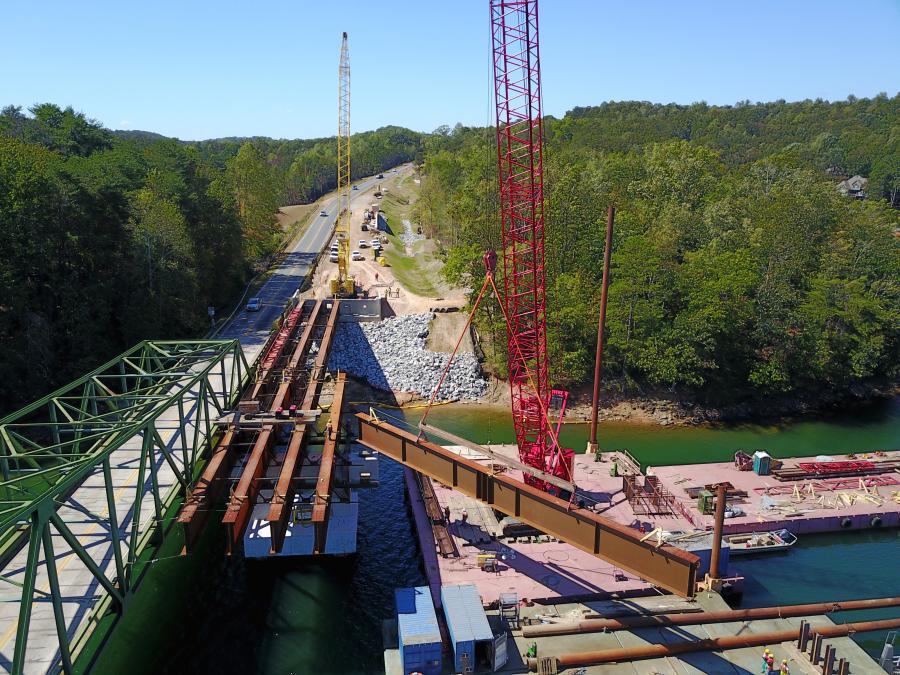 To build the new bridge and road, the general contractor used tons of steel, concrete and asphalt. The removed materials will be sent to recycling centers.

A Learning … and Teaching … Experience

Wade makes it a point to learn from all projects to improve construction delivery times, speed up the process, and find better ways to emphasize safety. For the most part, he was the sole GDOT employee on site, but was occasionally assisted by GDOT co-workers and consultants for the concrete pours. He did have the opportunity to help mentor a recent civil engineering graduate.

“It worked out well and was very successful,” he said. “The lessons learned on smaller projects help when working on larger ones. It gives you an opportunity to focus on the smaller details and processes. This was my first type of bridge using steel beams underneath. Formerly our conventional bridges used concrete beams.”