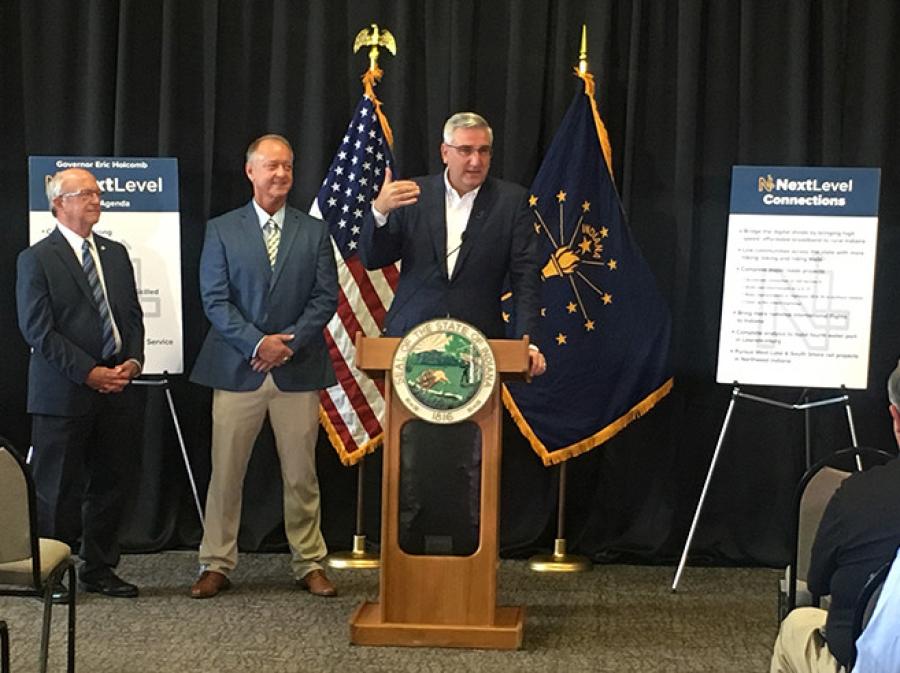 Gov. Eric J. Holcomb announced his infrastructure agenda plan for 2019, including a new $1 billion investment in infrastructure projects. The Next Level Connections program will expand broadband services in rural Indiana, grow the state's systems of trails, create more nonstop international flights and move up the completion of major highway projects. The state also will continue to pursue building a new fourth water port at Lawrenceburg and expansion of rail projects in northwest Indiana.

“Today we're sending a big message to the world that Indiana is making a huge investment in our quality of life and for those who aspire to join us,” said Holcomb. “We are linking Hoosiers to each other and to the world.”

Through the Next Level Connections program, Gov. Holcomb will:

-Add new interchanges on U.S. 31 between South Bend and Indianapolis and expand the number of projects that will be completed on U.S. 20 and 30 through 2023 ($190 million)

-Focus INDOT resources to clean up the state's highways

The Indiana Finance Authority will amend its agreement with the Indiana Toll Road Concession Company (ITRCC), which operates the Indiana Toll Road, to allow ITRCC to increase the toll rates for heavy vehicles by 35 percent, beginning in October. The $1 billion in proceeds from the amended ITRCC agreement will be used to fund planned road projects in the seven Toll Road counties, which will free up INDOT resources to be directed to the Next Level Connections program.

As a part of the new agreement, ITRCC will put $50 million into additional Toll Road upgrades, including safety, technology and communications initiatives such as a smart truck parking system and expansion of overhead message boards, cameras and variable speed signs. Over 10 years, by 2025, ITRCC will invest more than $500 million in Toll Road upgrades.

“Improvements on the Toll Road, on Highways 20, 30 and 31 will make our roads safer for truck and vehicle traffic alike and enhance economic development opportunities,” said Holcomb.

The toll increase will impact Class 3 and above vehicles. For example, the tolls for a Class 3 vehicle will increase from $16.33 to $22.04 (electronic card) for the entire 157-mi. trip. For a Class 5 vehicle, the toll will increase from $44.46 to $60.02. The IFA will consider the agreement at a future meeting. With the increase, the rate per mile will remain lower than nearly all other similar roads across the country.

“Today, we're defining Indiana differently than ever before. Next Level Connections is a direct investment in Hoosier infrastructure and quality of life that is essential to take Indiana to the next level,” said Holcomb.