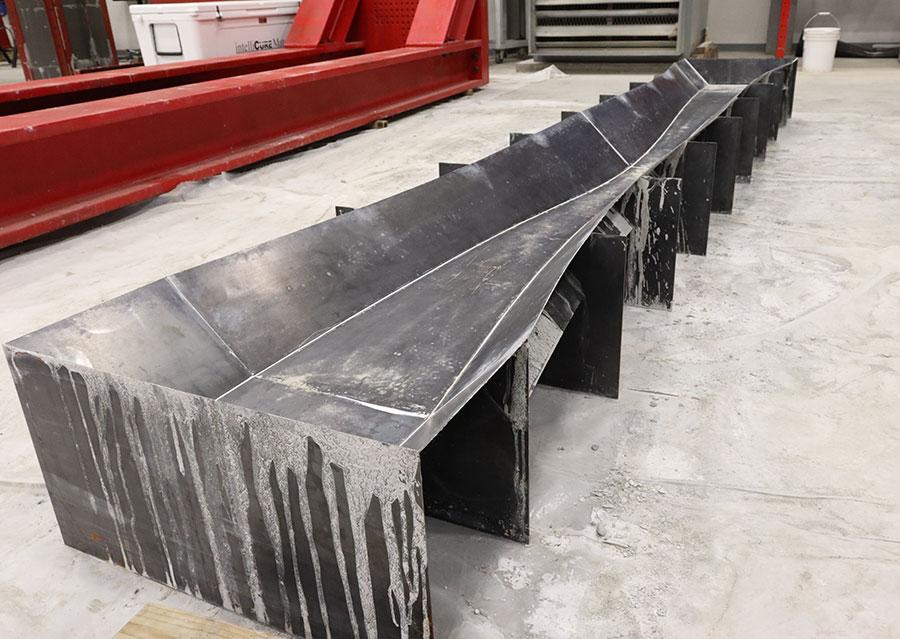 A form designed through the Zip-Form system allowed a concrete beam to be poured using less concrete but maintaining strength. (Photo courtesy of the University of Arkansas website)

On a recent July day, representatives from the University of Arkansas (UA) and the Massachusetts Institute of Technology (MIT) gathered at the Harvell Civil Engineering Research and Education Center on the UA campus in Fayetteville to conduct a stress test on a concrete beam.

Now, such tests typically do not attract many onlookers, but this demonstration was meant to showcase a collaborative new approach to beam design and optimization.

The man responsible for the beam's design was Mohamed Ismail, a Ph.D. student in building technology at MIT — a discipline existing at the intersection of architecture and engineering. He was on hand to witness the crushing test in person and seemed vaguely nervous that the beam might not perform as expected — a feeling heightened by the unusual degree of attention the stress test was receiving.

The fruits of research are not always immediately clear, but the nature of the test — hydraulic press versus concrete beam — brought out the various colleges' social media staff, who recognized strong visual content when they saw it, according to a recent news article on the UA website. 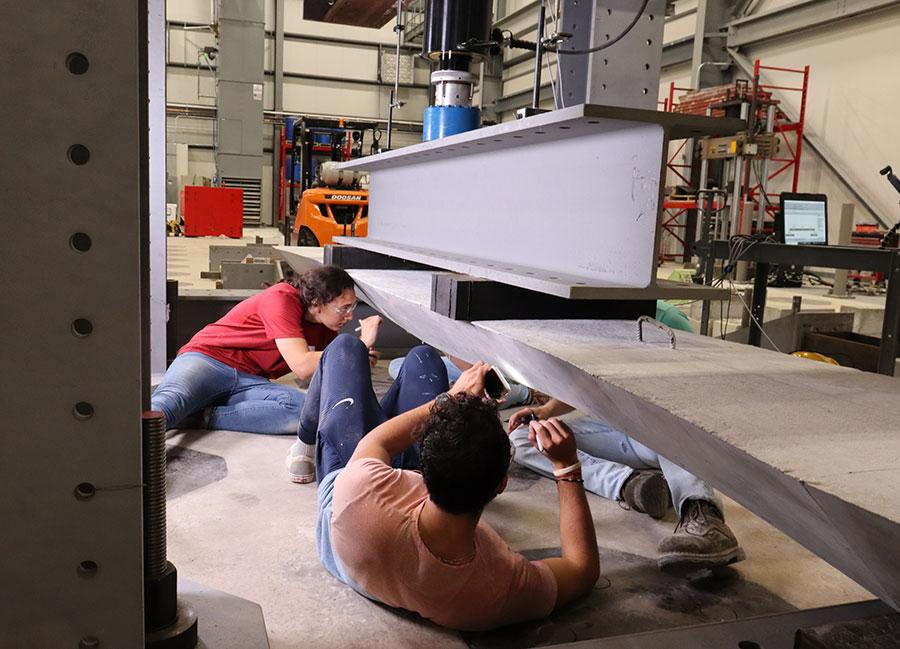 Graduate students examine the concrete beam for hairline fractures after stress was applied. (Photo courtesy of the University of Arkansas website)

Goal is To Become More Efficient With Less

Among Ismail's research interests is increasing the structural efficiency of building materials. In the case of concrete beams, that means minimizing the amount of concrete and steel used, including removing concrete from where it is not needed, and retaining it where it is. This resulted in his beam having a flat top but a base that curved in unanticipated ways.

He estimated that the beam in question contained 40 percent less embodied carbon — the amount of carbon burned to produce the concrete and steel used in the beam — than standard rectangular beams.

This is important for reasons of both sustainability and economy, Ismail noted, as he has his eye on the developing world, where urban growth is expected to surge.

"You're looking at places where there's going to be a need for high density construction," he explained. "So that means going up, going vertical and doing it safely. And, really, the only material that's widely available and accessible to most of those regions is concrete, so concrete's expected to be the number one material we use today. And it's expected to just go up in use because we really haven't found [any other] material that's able to meet demands and still be safe."

Bette Poblete, a graduate research assistant in civil engineering at UA who was conducting the stress test, noted it was one of the more interesting beam shapes she had encountered.

"Ordinarily, we test rectangular beams," she said. "There are a couple reasons we do this: it simplifies some of our calculations and makes the construction more straightforward. In terms of calculations, we rely on the geometric dimensions to help predict the strength of the beams. Before we test any member, we calculate the predicted load at which it will fail. Then, we'll compare our predicted loads to the actual loads. Since we use simpler shapes ordinarily, it makes the entire process easier."

In terms of testing Ismail's beam, Poblete added, "This beam was longer than we usually test, so getting it into our load frame posed a fun challenge. We ended up using our crane and forklift simultaneously to place it on our supports. Also, since the beam was trapezoidal at the ends, we had to be especially careful not to chip the corners."

Although there are undoubtedly similar testing facilities closer to Boston, where Ismail lives and is a doctoral student at arguably the best research university in the world, he came to UA to crush his beam for two reasons: Emily Baker and Edmund Harriss.

Together, they have been working on what they have dubbed the "Zip-Form" system. It arose out of an art project Harriss created through the Honors College, which ultimately became the 12-ft.-tall Curvahedra sculpture outside UA's Gearhart Hall — a spherical structure composed of a few curving steel strands.

Harriss, whose primary work is in geometry, also holds an appointment in the School of Art. His stated desire is "to put mathematics in a playful, choice-driven space where people can play with or appreciate mathematics through art and sculpture."

When he needed someone who could help fabricate the shapes he was dreaming up, using complex geometry, he reached out to Baker for help.

"I am deeply interested in exploring and innovating new ways of making physical objects and buildings," Baker explained.

As such, making Harriss' sculpture a reality posed a fun challenge for her. She ultimately created a jig, or clamping setup, to allow flat sections to be successfully attached, or "zipped," into curving steel forms. This method, paired with Harriss' computational formulations, became the basis for their Zip-Form construction system, producing highly accurate 3D curves with simplified fabrication techniques.

The efficient and economical software and manufacturing process proved so novel that the university, through its Technology Ventures office, later filed a provisional patent. 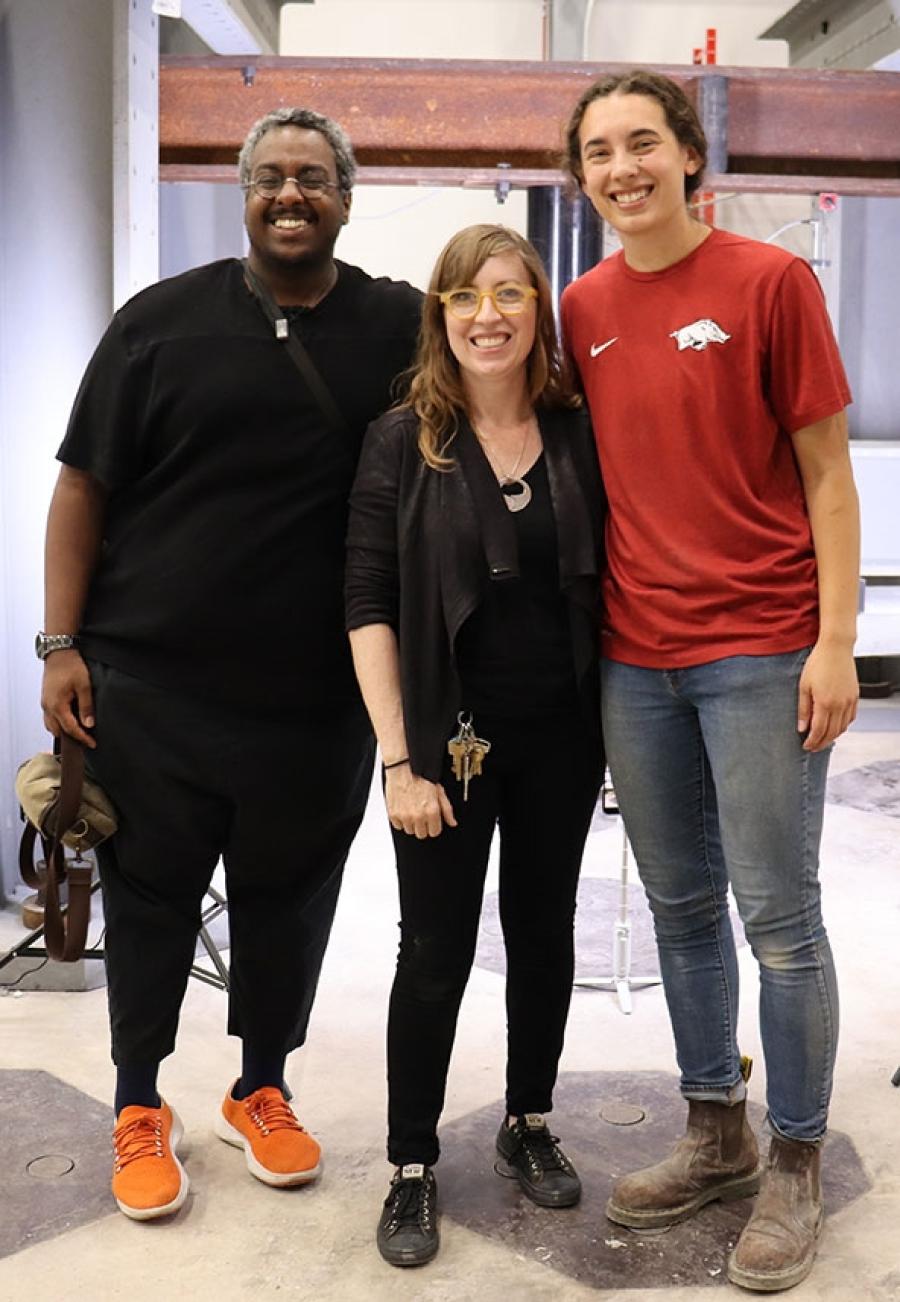 (L-R) are Mohamed Ismail, Emily Baker and Bette Poblete at the U of A Civil Engineering Research and Education Center. (Photo courtesy of the University of Arkansas website)

While the Zip-Form system was clearly innovative and could produce pleasing structures, Baker and Harriss knew there were more practical applications.

"We can apply these principles to materials that already have a flatness to them and manufacture pieces that are more efficient in strength and yet use fewer resources," he explained.

The opportunity to prove it came when Baker ran into Ismail at a conference, found they had common research interests, and invited him to speak to her class. While Ismail was talking to her class about beam optimization, a lightbulb went off over her head: Maybe the Zip-Form system could be used to help Ismail create a beam of complex curvature?

What followed were months of collaboration. Inherent in their discussion was that fabrication methods were inextricable from the design.

As Ismail explained, "We're trying to develop methods that are fabrication-aware. When we're actually designing and optimizing the structure, we know how it's going to be built, and the rules of how it's going to be built go back into the design process so it's more circular and not as linear. So, we had months of conversations with Emily and Edmund about the actual mathematical principles behind their Zip-Form system. What were the limits? What were the constraints? And then we found a way to put that into our structural model."

Finally, Ismail was ready to see his unorthodox beam design become a reality. Harriss' computations and Baker's jig-system were essential to shaping the formwork, which was created at the Fay Jones School's Build Lab in Fayetteville, where Baker oversees the digital steel lab.

Her method allowed them to make steel formwork with complex curvature like Ismail wanted almost as easily as she could make formwork for a flat beam.

"This is a vast improvement on other methods that might be used to make curving formwork," she said in describing the process.

Cameron Murray, an assistant professor of civil engineering at UA who advises Poblete, assisted with the pouring of concrete into the formwork the week prior to the test.

While he said there was nothing unusual about the concrete used, he noted "all of the materials were made in Arkansas. The coarse aggregate was quarried in Hindsville, the sand was from the Arkansas River in Van Buren, the cement was made in Foreman, [and] the water was from Beaver Lake. Concrete is inherently a local material."

The conventionality of the materials underscored Ismail's larger goal: he is interested in more efficient and sustainable design, but not necessarily revolutionary new materials. While he is excited about the potential for things like 3-D printed housing, that is decades away, and people need homes now, he said.

"Our group is interested in what is applicable today, like what can we go out and build right now. And that's why we're looking at regular strength concrete, regular strength steel, and fabrication methods that are relatively cheap and affordable, which is why this Arkansas project was so exciting. Emily and Edmund had been working on a method that can be replicated anywhere in the world quite easily."

The actual beam test proved uneventful in the way success often does.

It was designed to carry 8,500 lbs., and beyond that, the goal was to fail safely, in what Ismail describes as a "slow, ductile manner. You don't want it to collapse suddenly and in a scary way."

His beam performed the way he hoped, as it exhibited small cracks and minor bowing, or what Poblete described as "flexural cracking and deflection." The test proceeded through a series of steady weight increases followed by temporary plateaus, the spidering cracks documented by graduate students wielding black markers crawling under and around the beam.

Finally, the load was increased to 12,000 lbs., a weight far above its design strength, at which point an obvious failure occurred when a large chunk finally broke off, according to an article on the university website.

When the test was concluded, Ismail was relieved that his beam had done what it was designed to do, and with a lot less concrete than usual.

Ismal also believes the stress test's results revealed the tip of the iceberg.

"There's so much more we can do," he explained. "There are more complex structures we can design, and then there's more testing that we can do that gets into much more rigorous things like dynamic loading, testing for vibrations, and all sorts of things that the Arkansas structures' lab is definitely capable of. So, this was, in a lot of ways, proof that this idea can work, and now we need to actually develop it further." 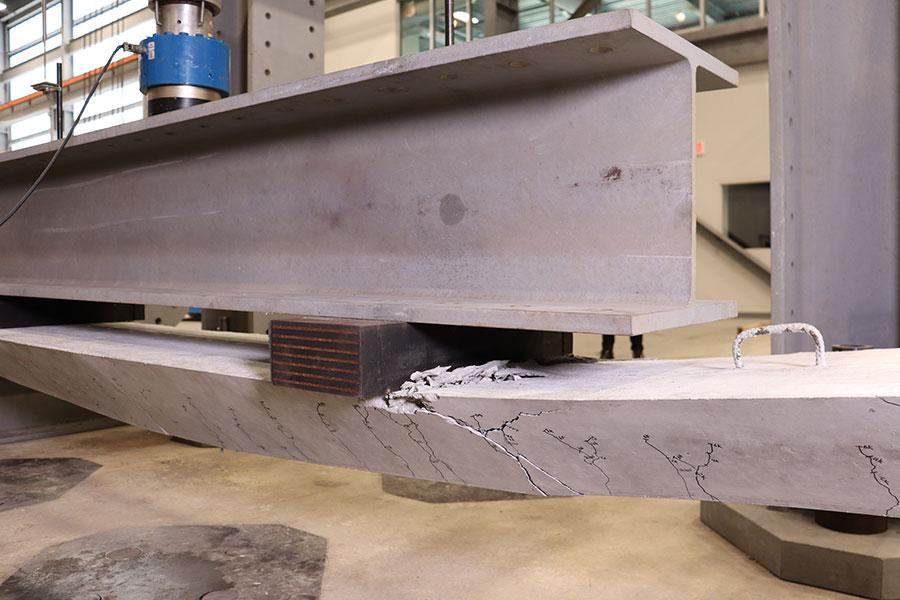 Designed to carry 8,500 pounds, the beam eventually cracked after 12,000 pounds of load were added. (Photo courtesy of the University of Arkansas website)