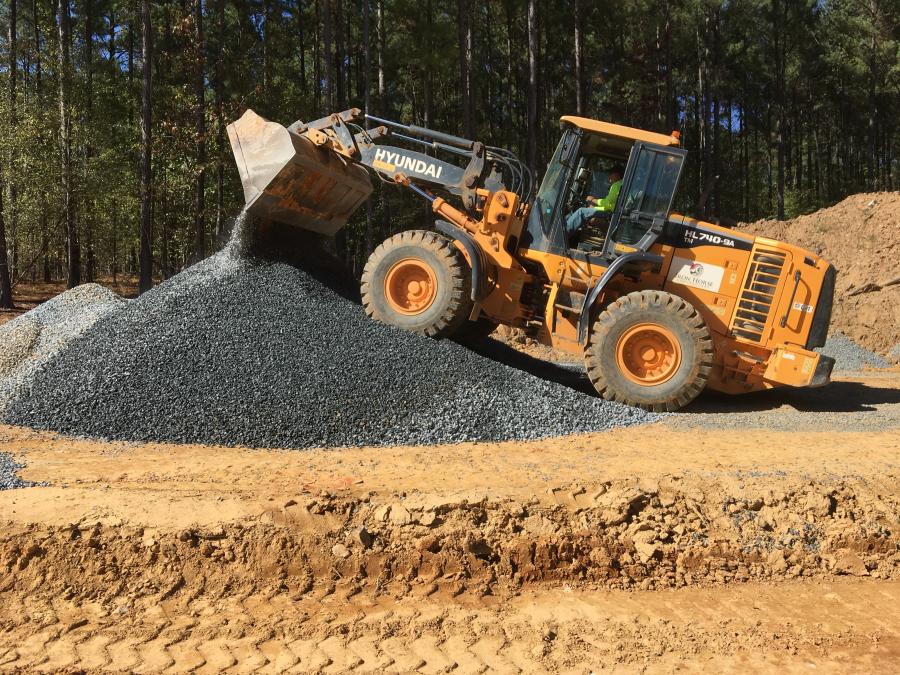 The operator of this Hyundai HL740-9A wheel loader moves stone on site.

Despite only having a few years under its belt, Iron Horse Contractors, based in Raleigh, N.C., has rapidly grown into one of the most recognized construction companies in the greater Raleigh Durham area.

John Santoro, owner of Iron Horse Contractors, has been in the business a bit longer.

“My father was a farmer in upstate New York. He had tractors, backhoes and bull dozers, so I've been around heavy equipment pretty much ever since I can remember,” said Santoro. “I started working for my father when I was in third grade. My summers were spent on the farm. At first, I started out driving a farm tractor, hauling stuff from the buildings down to the fields and from the fields back to the buildings. Then, I began using his bulldozer to clear the land, and I dug ditches with a backhoe.”

Later, in high school, a visit to Raleigh would determine where he would eventually put down roots and start his business.

“As a senior in high school, I came down and visited, and I really loved the area,” he said. “I went back up and went to school for a couple of months and told my parents that I was going to move down to Raleigh. I had to wait tables at Applebee's and a couple other restaurants to get myself finished with school.”

“I remember working in the heat and watching this guy in a dozer go back and forth grading,” Santoro said. “I thought to myself, 'those hydraulic muscles don't get tired no matter how hot it is. He doesn't look like he is in there sweating very bad. He's got his AC on.' I said, 'I am done with building decks.'”

Shortly after, Santoro applied for a position at Brinley's Grading in Raleigh and went to work for the company in August of 1998. He worked for the company for a few years and eventually moved on to CC Mangum Contractors, now known as Fred Smith Company, installing utilities. Within a few days, he was appointed the utility foreman for his crew. He worked for them for a couple years then worked for Blue Ridge Site Development with whom he worked for several years.

His time working with other contractors in Raleigh, Santoro said, honed his skills — from estimating to project managing, to the day-to-day business. He worked for seven different contracting firms during this time. He said working under the direction of John Gallo of Sun Coast Contracting who is now working with Reifenburg, and Ty Johnson of Fred Smith, whom he calls “masters of the industry.” Santoro spent most of his career working at Blue Ridge Site Development under the direct supervision of Ron Biggers the owner. Working for Biggers provided him with the experience he needed to start his own business — Iron Horse Contractors.

“I wanted to dabble in the land development side,” he said. I tried it but didn't care for that side of the industry. I wanted to be the contractor moving the dirt. There is nothing I enjoy more than getting a set of plans and going and building a project. I like being the one doing the work instead of being the one telling them to get the work done.”

“I always said I wanted to start a company and do my own thing by the time I was forty. I was always in a foreman position or a superintendent. I have worked for everybody else and it has always ended in me going somewhere else or me going back. It was just the same result every time. So, I figured the only way to change that result was to just jump in with both feet.

Santoro brought in a business partner not long after —Jim Lindsley, a friend from upstate New York where Santoro is from. Lindsley owns one of the largest roofing companies in that area.

Iron Horse Contractors' first project was a pond conversion for the Halle Building Companies. These ponds are used for temporary sediment basins during construction as a collector for all the storm runoff from the jobsite.

Later, the company won larger bids, including one for the Riverstone sub-division project.

“It was seated on 100 acres, and it was a right-of-way job,” Santoro said. “We only did the streets and the storm drain because it was a well and septic job. It was a job just under one million contracted, but by the time all the change orders and field adjustments, it ended up coming just over a million dollars for our very first project. It was pretty sweet to start out the gate with a job that had 70,000 cubic yards of dirt on it.”

Santoro rented Bell trucks and Hyundai excavators for the job from May Heavy Equipment.

“Getting started in this industry is hard. It is capital intensive,” he said. “The $100,000 I started with was used to market the business, as well as acquire the office space and get things going. $100,000 in this industry is not very much by any means. It wasn't like I had $100,000 to put on equipment. I had to have some of that for payroll to be able to get our guys going. We were building up. Jim had some equipment that was bought and paid for which he sent down to help along with Santoro's cash from the house sale.

“May Heavy Equipment stepped up even when I told them that I wouldn't be able to pay them right away. I told them, 'look, it is not going to be 30 days by the time I can pay you; I need that money for payroll. It is going to be 60 to 90 days or maybe even longer before we can pay you to get this thing going.' They stood right there with us, hand-in-hand. Those guys were amazing.”

“If it's anything that is electronic and digital, May comes out and handles that,” he said. “They also service equipment that is rented or leased. May offers great service; they have done a great job for us.”

In total, the company has a fleet of more than 40 pieces of machinery, which is used for what Santoro calls a “turn-key” site development services. The company performs grading, erosion control and utilities but sub contracts out other work. Iron Horse Contractors has an unlimited license for Highway and Public Utilities!

As their company continues to grow, Santoro points to one simple rule to success.

“You need to say what you are going to do, and do it. It's as simple as that. Don't tell a developer that you can have a job done in three months when you know it is going to take six months.”

For more information on May Heavy Equipment, visit www.mayequip.com.