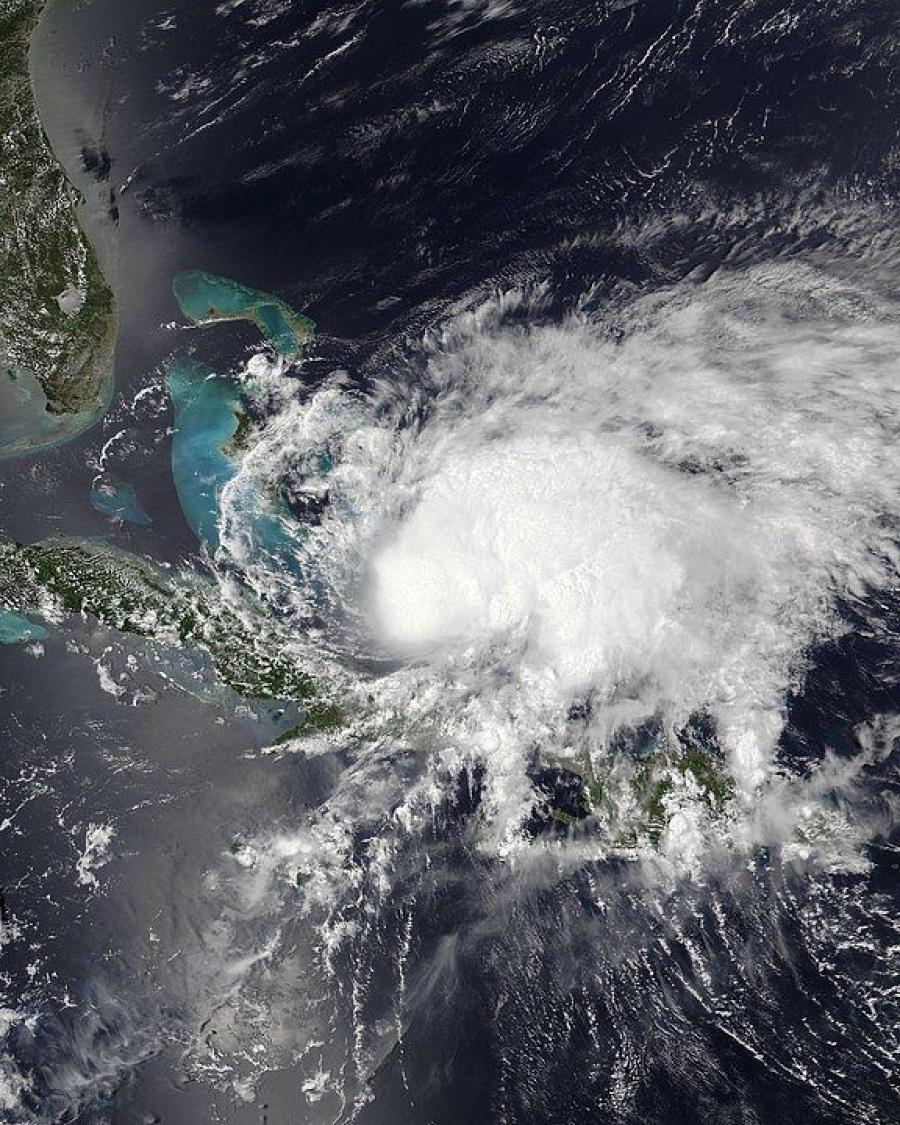 Isaias inflicted significant damage as it roared up the East Coast into the Northeast and New England, bringing with it heavy rains and flooding, and power outages affecting millions and destruction from high winds.

Although only rated as a Category 1 hurricane, Isaias was still a deadly and destructive storm after it made landfall in the United States along the southeast coast of North Carolina on Aug. 3.

From there, the storm weakened into a Tropical Storm, but still had enough punch left to inflict significant damage as it roared up the East Coast into the Northeast and New England, bringing with it heavy rains and flooding, and power outages affecting millions and destruction from high winds. Isaias also caused an outbreak of 29 tornadoes from South Carolina to Pennsylvania.

On Aug. 4-5, Northeast and New England residents witnessed the storm wash out roads and bridges, cripple electrical utilities, flood interstates and even cause a river barge to break loose and wedge itself under a major bridge in downtown Philadelphia, leading local officials to briefly close the span to vehicle traffic.

A total of 10 lives were lost in the Mid-Atlantic and New England states due to Isaias.

Maryland Department of Transportation State Highway Administration (MDOT SHA) is continuing its response to Isaias by assessing damage to roadways, making repairs and maintaining detours at four locations in the southern portion of the state. The damaged areas are on the peninsula south of Washington, D.C., between the Potomac River and Chesapeake Bay.

According to reports from the Southern Maryland Chronicle, in St. Mary's and Calvert counties, where there were 18 closures at the height of the storm, crews are addressing two damaged bridges and a small structure that resulted in complete washouts due to heavy rains. MDOT SHA engineers and maintenance crews have evaluated roadway damage and are beginning construction plans to restore access.

The MD Route 7 bridge over Saint Clements Creek in St. Mary's County was washed away, and state highway crews began work to repair the structure Aug. 10. Concrete General Inc. of Gaithersburg is performing the work.

In addition, the nearby MD Rt. 6 bridge over Persimmon Creek suffered damage when a portion of the roadway leading to it collapsed. Officials are unsure how long this bridge will be closed.

On MD Rt. 263 (Plum Point Road) at Wilson Road, destruction to a portion of the road and bridge caused local traffic to be diverted around the site. Repair crews from Concrete General Inc. started work on Aug. 10. 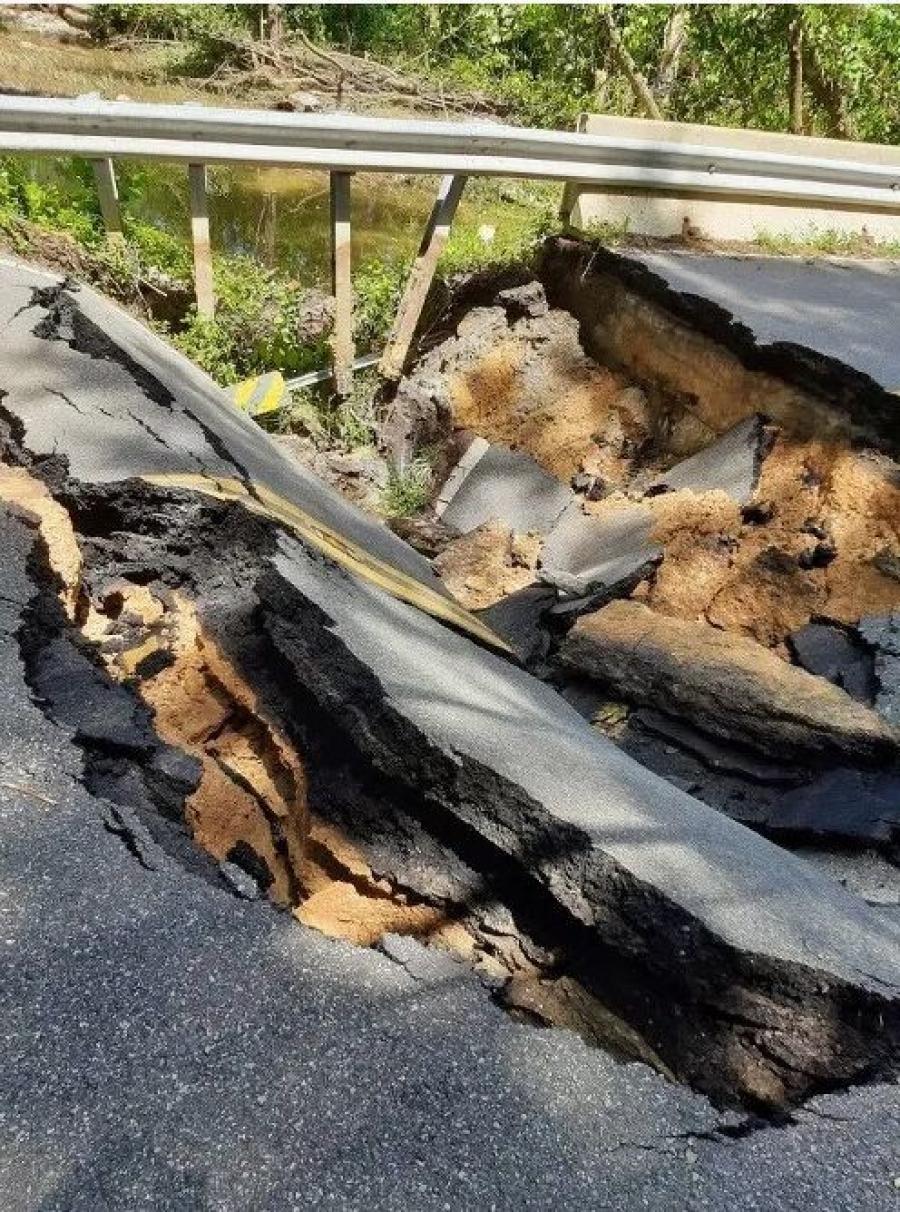 In Prince George's County, near its border with Charles County, the storm eroded portions of MD Rt. 381, causing a collapse on one lane of the north approach roadway to the MD Rt. 381 bridge.

The MDOT SHA said Aug. 10 that repairs started over the weekend on the roadway to protect the bridge from further erosion. The agency anticipated it would have MD Rt. 381 open toward the end of the next week.

Area residents can expect construction activity for the next several weeks in many parts of the region, according to the MDOT SHA.

After torrential rains from Isaias completely swept away a private bridge and roadway in Calvert County on Aug. 4, it left about 15 residents stranded with no power and no way out from their homes on Hunting Farms Lane.

According to WJLA-TV in Washington, supplies, equipment and labor were donated by a local company, J. Keen Constructionin Owings, to build a footbridge for the neighbors.

"We had been on the phone with the county all week trying to figure out how we can expedite a permanent solution," said Christina McCutchan, the J. Keen project manager. "But in the meantime, those folks need a temporary solution, so we were trying to figure out what can we do to help them."

Residents still don't know how they're going to get the main driveway fixed, but at least they can get their mail and have access to medicine and groceries. Repairs to the private roads are the responsibility of the homeowners, according to one of the residents. 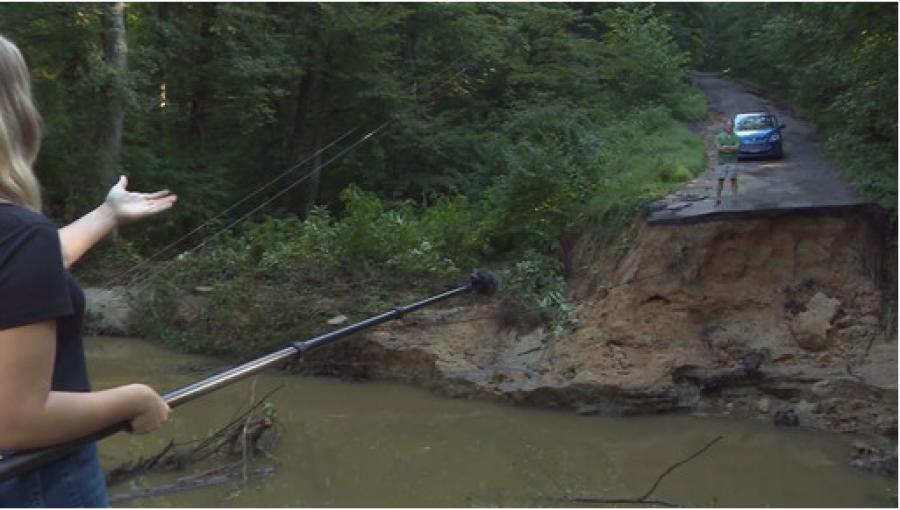 Hurricane Isaias destroyed the only road that leads out of a community of seven homes in Huntingtown, Md., on Aug. 4, 2020. (ABC7 photo)

The largest closure along the trail covered 58.9 mi., from PA Route 611 (South Delaware Drive) in Easton to Jefferson Avenue in Bristol. The entire length of the historic trail is 165 mi.

Crews Free Barge Wedged Under I-676 Bridge in Philadelphia

Much of the Philadelphia area and southern New Jersey was slammed by three to 10 in. of rainfall as a result of Isaias. Philadelphia and its suburbs suffered major flooding as the Schuylkill River and other creeks in the city swelled to record levels.

On Tuesday afternoon, Aug. 4, a 100-ton barge broke free of its mooring during torrential rain and crashed onto the underside of a bridge on the Vine Street Expressway (I-676) across the Schuylkill in downtown Philadelphia. The Philadelphia Inquirer reported that rising waters in the storm-swollen Schuylkill had dislodged the C.B. Lehigh, which was connected to a pair of hopper barges.

Contractor Atlantic Subsea Inc. of Bridgeton, N.J., was using the vessel to dredge years of silty buildup from the river in front of Boathouse Row and along the regatta racecourse farther upstream.

The C.B. Lehigh was removed the next day by a tugboat, according to the United States Army Corps of Engineers.

Using what he called a "snooper crane," workers inspected the underside of the bridge and determined that the most notable damage was to a stiffener — essentially a welded plate on a girder that helps prevent the bridge from buckling. Rudolph said the stiffener is "not as important as it sounds" for structural integrity, but the bridge will probably be partially shut down at some point in the future so it can be replaced.

Interstate 676, which had been closed to traffic near the river since the afternoon Aug. 4, opened its eastbound lanes about midday Aug. 6, with westbound lanes reopening about an hour later. 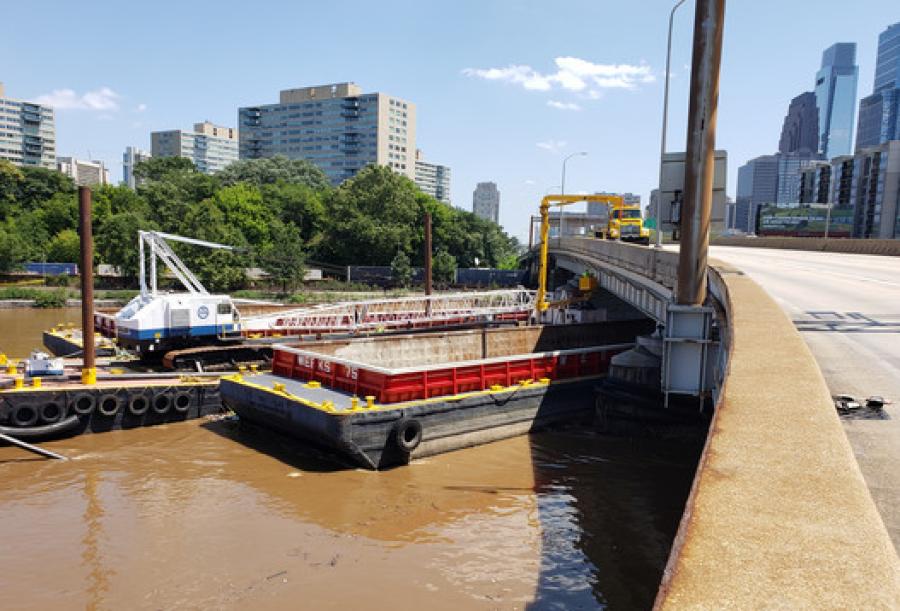 The heavy rains and strong winds from fast-moving Tropical Storm Isaias dealt such a wallop that millions were left without power in New York City and the surrounding area. Gov. Andrew Cuomo declared a State of Emergency for downstate New York to enable state government to provide additional support to local agencies throughout the clean-up and recovery process.

Nearly 2.5 million people lost power in the region, according to a report from WABC-TV. New York's primary utility company, Con Edison, said the number of power outages from Isaias was the second largest in the company's history. Only Superstorm Sandy in 2012 caused more.

Con Edison reported 260,000 customers were left without power just after the storm rampaged through New York City and Westchester County on Aug. 4. By 8:30 a.m. on Aug 11, the number of outages reported by the utility had dropped to 1,884 and 11,505 customers were out of service.

Isaias Left Behind a Mess in New Jersey

Five days after Isaias barreled through New Jersey and knocked out power to more than 1.4 million homes and businesses, tens of thousands were still waiting for their service to be revived and some estimates have all restoration times being done by Aug. 11.

As of 7:30 a.m. Aug. 9, more than 27,000 Jersey Central Power & Light (JCP&L) customers were without electricity. In addition, Public Service Electric and Gas (PSE&G) had more than 11,000 outages, while Atlantic City Electric was down to approximately 350. Orange & Rockland, which serves more than 62,000 homes and businesses in Bergen, Passaic and Sussex counties, had about 3,000 outages.

Downed trees from the storm caused problems for New Jersey Transit on the state's Atlantic coast.

In the wake of a pair of confirmed tornado touchdowns on Aug. 4 — in Cape May County and in Ship Bottom on Long Beach Island in Ocean County — NJ Transit's Morris & Essex and Gladstone Branch was suspended as crews repaired extensive damage to signal systems and overhead wires, which power the trains. Once personnel clear the area and restore the wires, the infrastructure will have to undergo inspections prior to the resumption of service.

In Connecticut, utility companies there have also been working around the clock to put a dent in the number of widespread outages from Isaias.

Eversource, the state's primary utility company, said Monday afternoon, Aug. 10 that more than 90 percent of its customers had regained their power and expected the remaining restorations to be made by Tuesday night. More than 2,500 crews worked over the weekend to restore power, the utility company said, and have restored power to approximately 900,000 customers since the storm began.

"We continue to work urgently to restore power to our customers," said a message on the Eversource website, adding it has 4,500 crews on the job. "We estimate we will have restoration substantially complete by Tuesday, August 11, at 11:59 p.m.

The power company defined "substantially complete" to mean fewer than 1 percent of customers would still be without electricity.

Eversource said it has worked hard to prioritize and restore critical infrastructure and facilities such as hospitals, water treatment plants, fire and police departments and airports. As of Aug. 10, the utility company had restored 779 of the 860 identified critical facilities.

"We are making complex repairs and, in some cases, rebuilding entire portions of the electric system, which can be time intensive," according to information on the utility website.

As Isaias swept through Massachusetts on Aug. 4, it left behind split trees, downed power lines and nearly 250,000 households and businesses without power.

Vermont's urban drainage areas, however, reported about a dozen overflows to wastewater treatment plants on the afternoon and evening of Aug. 4 due to the heavy rain.

Treatment plants affected include those in Burlington, Rutland, Montpelier, Vergennes, St. Albans and St. Johnsbury, according to the Vermont Department of Environmental Conservation.