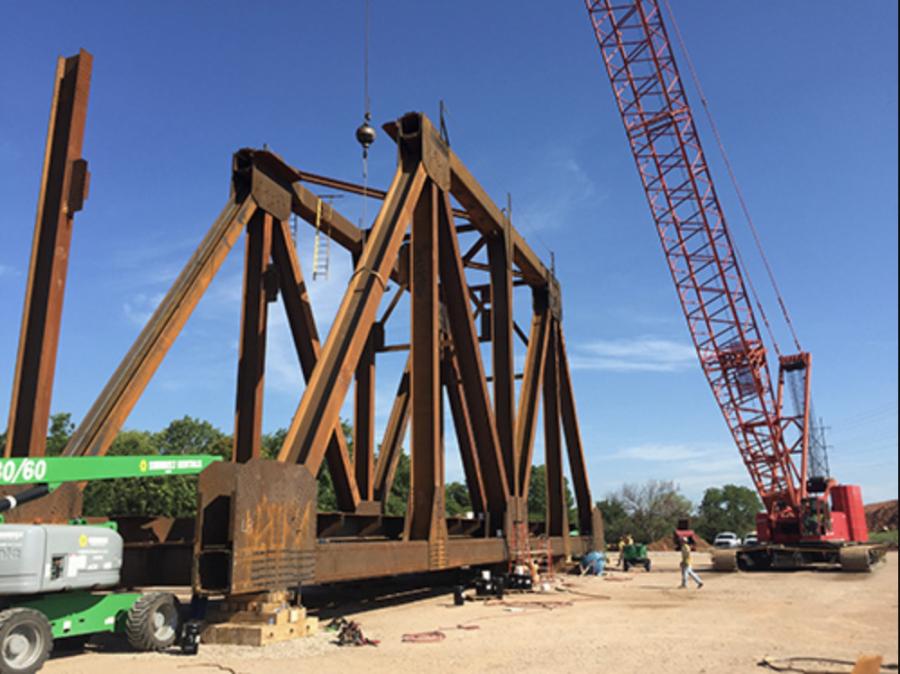 At its Jan. 3 meeting, the Oklahoma Transportation Commission learned of the future weekend closure on I-235 at N. 50th St. to install a new railroad bridge over the interstate. The event date, currently targeted for the weekend of Jan. 20 or Jan. 27, will be determined as the initial weekend approaches as it is dependent on weather conditions among many other factors. The three-day event will be live streaming online and seating will be provided on site for those interested. (ODOT photo)

Highlights of the Oklahoma Transportation Commission's Jan. 3 meeting include an update on major interstate work in the Oklahoma City metro area on I-40 and I-235, reflection on major events affecting transportation in the past year, progress of the Statewide Transportation Improvement Program (STIP) and approval of an engineering contract for the I-40 interchange in Clinton.

Mike Patterson, Oklahoma Department of Transportation executive director, informed the Commission that roadwork is beginning this weekend on I-40 between I-240 and Peebly Road which will widen I-40 to six lanes and reconstruct the interchange at Choctaw Road Construction on the up to $75 million project is expected to take more than two years.

Also announced was a future weekend closure of I-235 in late January for an on-going construction project on N. 50th Street. Crews will close all lanes of the interstate while moving in an overhead railroad bridge into place. The event date, currently targeted for the weekend of Jan. 20 or Jan. 27, will be determined as the initial weekend approaches as it is dependent on weather conditions among many other factors. The three-day event will be live streaming online and seating will be provided on site for those interested.

Patterson highlighted several major transportation news items from 2017 with an emphasis on the impact of state funding cuts to the Eight-Year Construction Work Plan. The department was forced to delay projects and even take the unprecedented action of removing projects from the plan due to $840 million in cumulative state funding reductions in the past seven years.

“In the past we've been able to adjust projects within the Eight-Year Plan to maintain a balanced budget, but this is the first year we've actually had to remove them due to budget reductions. We told the Legislature in 2016 that if we had to take another reduction this would happen,” Patterson said. “Removing projects, while difficult, was the fiscally responsible thing to do. When you have less money, you have to make adjustments and keep focus.”

Other highlights included the department's endeavors toward more safety measures to reduce the number of fatalities statewide like installing centerline rumble strips and the energies toward the department's Work Zone Awareness campaign. He touched on expediting the Lexington Purcell bridge reconstruction and the continued efforts to address remaining structurally deficient highway bridges.

Commissioners approved the STIP to be forwarded to the Federal Highway and Federal Transit Administrations for formal and final approval. The STIP is a detailed list of regionally significant construction projects anticipated for the next four federal fiscal years. The STIP includes the first four years of highway projects in ODOT's Eight-Year Construction Work Plan and federally funded projects by the Association of Central Oklahoma Governments, tribal governments and public transit providers.

Commissioners gave their approval for a $528,900 engineering contract to prepare construction plans to modify the interchange at the I-40 and I-40B west junction in Clinton. The project is included in the Eight-Year Construction Work Plan with a scheduled let date in federal fiscal year 2024 for a total estimate of $20 million.

Since ODOT does not typically advertise new highway construction projects for bid in December, no construction contracts were awarded by the commission this month.

The eight-member panel, appointed by the governor to oversee the state's transportation development, meets monthly. The next meeting is scheduled for Feb. 12 at 11 a.m.