Since 1976, Neil Smith has represented JCB in a number of roles, most recently as the head of the company's North American demonstration team.

But you also can find him in the Guinness Book of World Records as the holder of the record for the longest trip made in an excavator, or as the driver of the world famous 100 mph drag-racing backhoe, the JCB GT.

On Sept. 30 the company celebrated the achievements of Smith, whose career with JCB took him to more than 50 countries and whose skills and "can-do" attitude, have left a lasting impact on countless team members lives.

Speaking at the ceremony at the company's headquarters in Pooler, Ga., JCB North America President and CEO Richard Fox-Marrs said, "Neil's initial mission in North America was to set up the demo facility and he set it up well, putting the same exacting standards in place in Savannah that he'd seen in the UK. He really did create an excellent facility and team that has stood the test of time.

"All of us here at JCB wish Neil the very best in his retirement, we are extremely grateful for all of his contributions to the success of the company in his 44-year career, and he will be held in the highest regard," said Fox-Marrs.

Born in Rocester, United Kingdom, the home of JCB's World Headquarters, working for JCB was a natural fit for Smith as both his father and older brother both worked for JCB.

"I walked past JCB every day to get to secondary school," said Smith. "In fact, at 12 or 13 years old, my friends and I were walking home and decided to stop into the marketing department to pick up brochures for a school project. It was this experience that made me realize just how great of a company JCB is, and I knew then that this was where I wanted to be one day."

Flash forward a few years and Smith would find himself joining the ranks of JCB in the machine shop, Bay 1 to be exact, working with numerically controlled machines.

Smith served in several other roles at JCB until joining the UK Demonstration Team in 1980 where he spent his first six months learning the ins and outs of the JCB backhoe in order to perform with the world famous JCB Dancing Diggers.

"What's Your Next Move"

For years Smith supported global JCB events from based in the UK, including trade shows, dealer events and even customer installations. But why leave the UK? When asked "What brought you to the United States?" Smith laughed and said, "That's a funny story."

And as the story unfolds, it sounds more like a movie plot than an equipment company job offer. Smith said in 2000 he came across from the UK to support JCB marketing efforts with the Superbowl in Atlanta, Ga. After the event, John Patterson, JCB Group CEO at the time, said to Smith "What's your next move?" and it was then that Smith made a statement that would change his life, "I've always wanted to move to the States."

Six months later, Smith and his wife and their two daughters would move to the United States so that Smith could help open JCB's North American headquarters in Savannah, Ga., and lead the North American Demonstration Team.

Smith's career in the States has provided him a number of unique opportunities, from driving the "Backhoe Across America," to creating Santa's sleigh for The Lady Bamford Center for Early Childhood Development, to designing and building one of the region's most enjoyable mud run courses, and becoming the driver of the JCB GT.

When the subject of the JCB GT comes up, Smith joked that he was in the "wrong place at the wrong time."

The JCB GT is the drag racing backhoe that can reach speeds more than 100 mph due to its supercharged 572 big block Chevrolet V8 engine. After a chance walk past a manager's window, Smith is one of only two people in the global company who is certified to drive the GT.

But it's through the GT that Smith had several experiences of a lifetime, including drag racing down a professional test track and spending time with the television show "Top Gear."

During his final days in the office at JCB, Smith recounted the amount of once-in-a-lifetime opportunities that his career at JCB has afforded him. And when asked what his secret to working at the same place for 44 years is, he smiled and said, "It's been a privilege to do what I do. I've been fortunate to never have woken up and said ‘I have to go to work' it's more like ‘I get to go to work'."

In retirement, Smith and his wife Jeannette will move back to the UK where he said, with a laugh, that he plans to retire. But those who know Smith best know that after a short while, we're more than likely to find him back at JCB Rocester, UK where it all began. 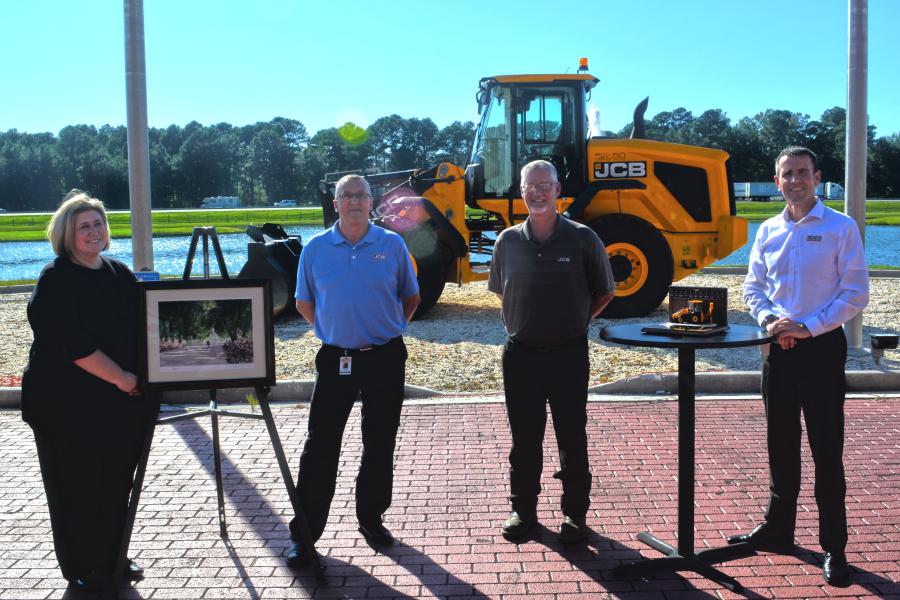