J.H. Hiers Construction 'Does It All' With Volvo, Ascendum 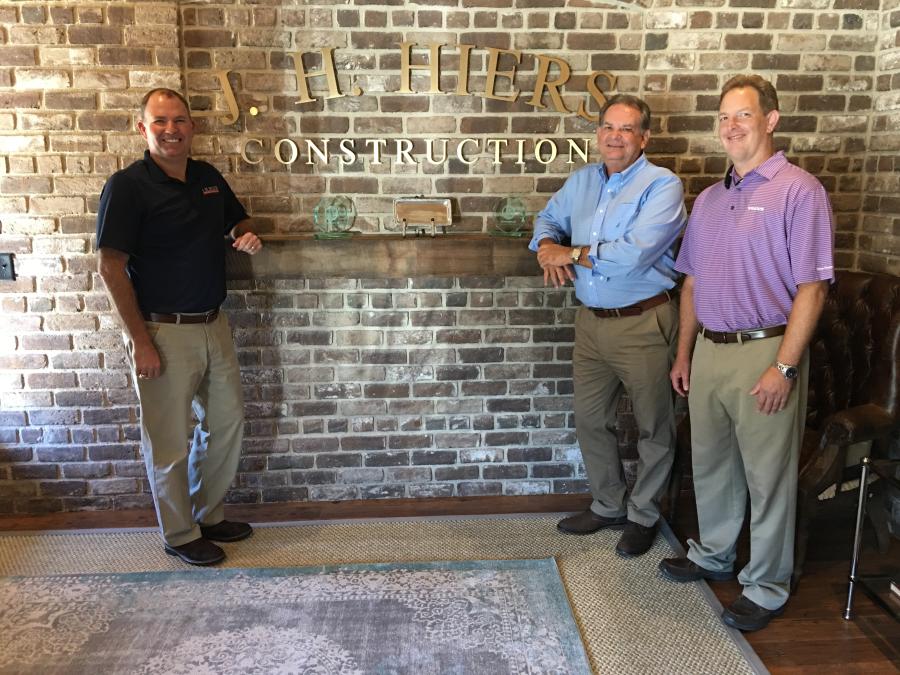 Machinery has been a big part of Jeff Hiers' life for as long as he can remember — his father ran tractors on their family farm, his mother's family ran a construction company. So, after studying civil engineering at The Citadel, he went to work for the family business: Brunson Construction Company, a general contractor/commercial builder.

He thought he'd work there forever… that he was “pre-destined” to work there… but after four years he left to find employment that would more closely use his degree.

“The projects that I was managing for Brunson, the grading side of it always interested me more,” said Hiers. “Pouring the curb, laying the pipe, the roofing and the block laying, it was fine, but being out in the dirt was more interesting to me, more of a challenge if you will.

“I left there and went to work for a grading contractor, J. R. Wilson Construction, and started there as an operator and became a project manager and estimator.

At the time of purchase in 2004, the company consisted of nine employees. Fortunately for Hiers, his new company, J.H. Hiers Construction, was already in negotiations to work on a Walgreens Drug Store in Walterboro, S.C., and a Refuel Convenience Store in Charleston, S.C., enabling Hiers to hit the ground running.

“Mr. Nettles basically had one of everything … a rubber tire backhoe, a bull dozer, a couple of excavators, a couple of rollers, so for the first two or three months the machines that came with the purchase, I used. But, the first piece I bought was a Volvo L60 Loader.

“Mr. Nettles kept his rubber tire backhoe, therefore, I had to purchase something to move pipe around with on the jobs. Mr. Nettles didn't do water and sewer, he just did storm drains. My favorite part of site work is the pipe, water, sewer and storm drains. I like dirt, rock and paving as well, but the pipe is to me, the challenging part of the situation.”

From 2004 to 2009 before the recession hit, the company experienced moderate growth, according to Hiers, growing from doing six to eight projects a year to approximately 15 on 3- and 4-acre sites.

“We, from early on, developed a good reputation doing commercial site work. We did a lot of work for most of the local general contractors.”

“Coming out of the recession in 2011 going into 2012, we were really fighting for work. We got an opportunity to bid some smaller sub-division work for national builders and we were pretty successful at it. They liked our work and liked our people and that's really when we took off. In 2013, we really got a lot of exposure working for one builder, which opened the door to work for many others. And while the projects in 2013 might have been 15 to 20-acre sites, the company now has worked on jobs as large as 120 acres,” he said.

“Two notable projects that I remember coming through the recession are Harbor Town Clubhouse and Wescott Park. Both design/build projects came our way during a very tough economy. Choate Construction hired us to perform the sitework at Harbor Town, Hilton Head, S.C., which started the week after the Heritage Golf Tournament, and had to be completed before the tournament the following year. Brunson Construction hired us to perform the sitework of the new baseball complex, Wescott Park, North Charleston, S.C., which at that time, was our largest project to date. Both projects were completed on time and within budget.”

Doing It All With Volvo

“We do everything. Clearing, water, sewer, storm drains, curb, paving, take it from wooded timberland to finished lots with roads and associated infrastructure,” Hiers said.

But to do “everything”, Hiers needed more than one Volvo L60 loader. His fleet now includes 24 excavators, eight articulated trucks and 14 loaders. To keep this fleet in running shape, Hiers relies on Ascendum.

“J.H. Hiers and Ascendum have developed a strong partnership over the years. My lead mechanic and the Volvo service team have a great relationship. They keep us going. As far as I can tell, we get as good a service as anybody. We deal with other dealers so I have others to compare to and Volvo always comes through for us.

“We do our own servicing, oil change, filter change, greasing and all that, so we use their team for technical/computer problems and major repairs. They treat us very well.

“Every loader I have is a Volvo other than one that came with Nettles, I would say 85 percent of the excavators are Volvo, all off-road trucks are Volvo. I depend heavily on Volvo equipment and after 14 years, I can honestly say they have provided us with excellent machines and service.”

J.H. Hiers Construction is based in Beaufort, S.C., which is its corporate office. The company's shop and the office where it started is in Walterboro, S.C. A satellite office in Charleston is currently being renovated.