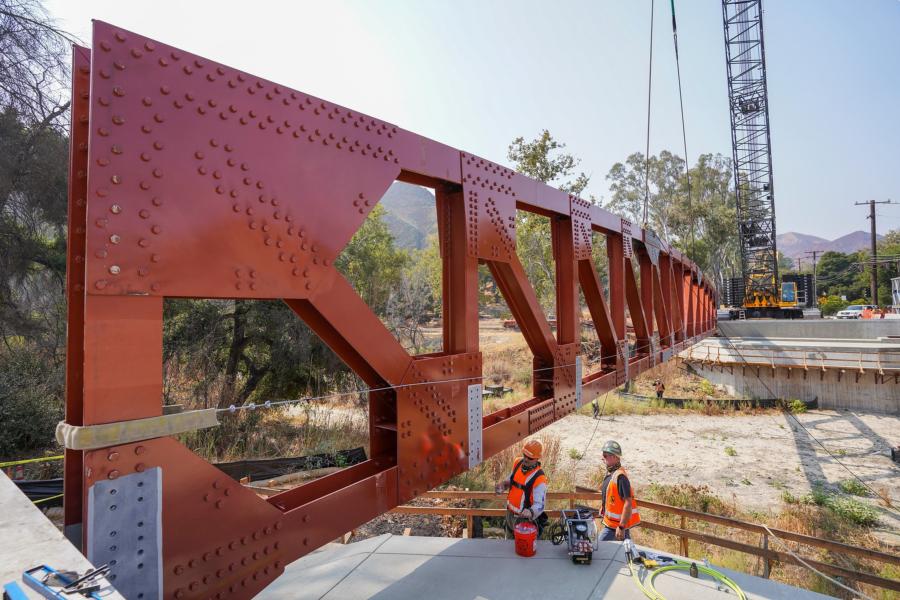 In the aftermath of a natural disaster like California's Woolsey Fire, shell-shocked residents wonder how they can restart their lives. Often roads, bridges and infrastructure need to be rebuilt for that to happen.

The Woolsey fire began in November 2018 in the Agoura Hills and burned some 100,000 acres in Los Angeles and Ventura counties. The fire caused the evacuation of nearly 300,000 people and destroyed approximately 1,600 structures. One of those important structures destroyed was the Triunfo Creek Bridge, which has taken some three years to rebuild.

When the fire was finally quelled, the bridge looked as if an angry giant had twisted the steel and asphalt in his hands. Even the concrete pylons were charred and degraded by the intense heat of the fire.

The cost for building the new bridge was $5.4 million. The entire project, including the temporary bridge, demolition of the former bridge and other improvements came to $12 million. 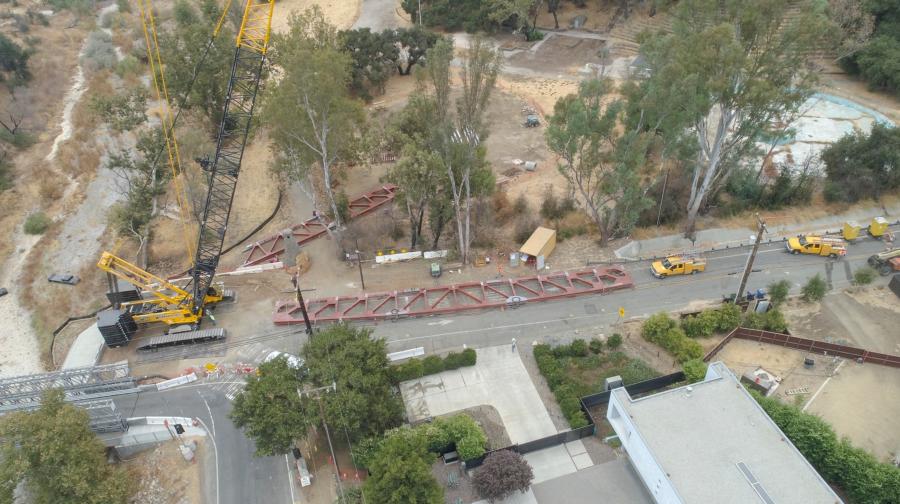 The county provided a temporary bridge over Triunfo Creek for essential access from Mulholland Highway to residents restarting their lives. During the construction, the Granite team worked closely with the LACDPW to accommodate residents, beach visitors, cyclists, tourists, utility services and pedestrians moving through the work zones. The National Park Service was another important player in the project, providing permits for staging areas for protection of animals like deer, bobcats, eagles, parrots and other wildlife in the area.

The project got under way with the demolition of sections of the old bridge abutments and recycling the concrete along with nearly 2,000 cubic yards of old asphalt. The concrete was delivered to Granite's Santa Paula materials and recycling plant. The asphalt was recycled on-site and was used to upgrade National Parks' parking areas.

Granite worked closely with surrounding communities to acquire permits to set in motion the construction and installation of the permanent bridge. US Bridge manufactured the steel truss bridge components in Ohio. All bridge components were galvanized dipped and epoxy coated for improved resistance to the elements.

At the factory the bridge components were loaded onto 27 tractor-trailers for delivery to California. Trucking during COVID was difficult as drivers got sick, breakdowns happened, and state regulations sometimes proved vexing. For example, some states did not allow transporting oversize loads on weekends. Trucks traveled in sequence with the first elements to be installed scheduled to arrive first. Of course, the Number 1 truck in the "parade" had a breakdown in New Mexico, temporarily stalling the installation process. All the other deliveries were staged nearby awaiting the arrival of the primary components for construction and installation.

The Granite team gave special attention to environmental considerations in both the demolition and construction phases.

"It was important to keep debris from entering the creek while we were performing construction activities for the new bridge," said Steven Jackson, project manager of Granite. "Demolishing portions of the old bridge abutments and placing the new concrete, meant we had to contain a lot of material."

In addition to the demolition, workers excavated additional areas to provide access and safe footing for the drilling rigs and cranes. Granite used a conventional Manitowoc MLC300 crawler crane, with design and services provided by Bragg Crane, for the heavy lifts and all crane work. 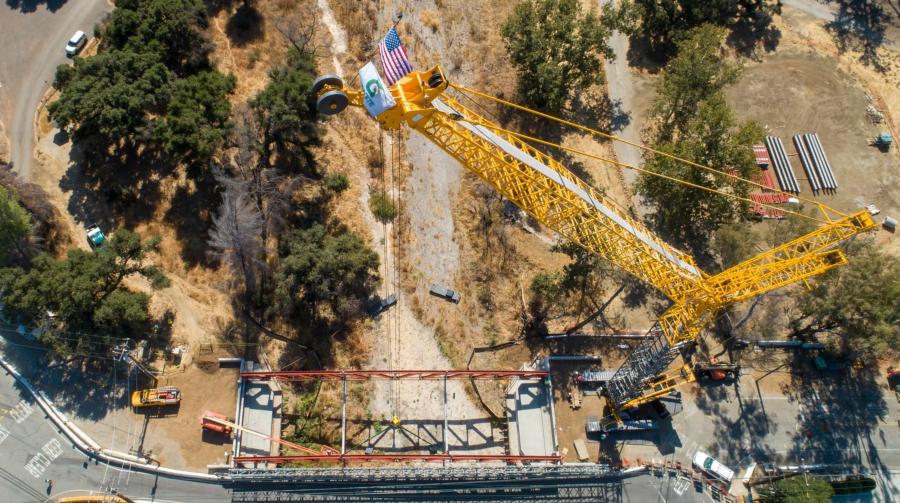 The powerful equipment was essential.

"After several sets of shop drawings, the approved bridge weighed nearly twice as much as the bridge design presented at bid time," said Jackson. "The steel truss design is superior to the old bridge in design, strength and architecture. It also had to conform to the new Caltrans seismic standards for bridges in California."

The heavy lifting included the assembly, torquing and raising the immense truss side rails of the bridge over trees and avoiding utility lines to lower onto the new footings where they were bolted securely into place. The bridge abutments on either side of the creek were built on five CIDH piles on each side with concrete for the foundations. Eleven steel girders support the new concrete roadway over the creek. Workers used some 1,800 tons of asphalt on the three roads approaching the bridge.

The job also included reconfiguring several utilities. The existing 14 in.water lines were reconfigured and attached to the pedestrian side of the bridge. A Southern California Gas line was buried under the creek bed. Workers temporarily relocated overhead utilities, including Southern California Edison, AT&T and Spectrum for immediate use after the fire. They were installed into the new permanent positions as part of the project.

"Community outreach as well as environmental and safety precautions for this project were paramount," said Jackson. "The area contains multimillion-dollar homes, including celebrity homes. The magnitude of this type of work was taken into consideration. They knew the project was in good hands."

The new bridge carries two lanes of traffic and includes a 5-ft.-wide pedestrian walkway. It spans 143 ft. over the creek. 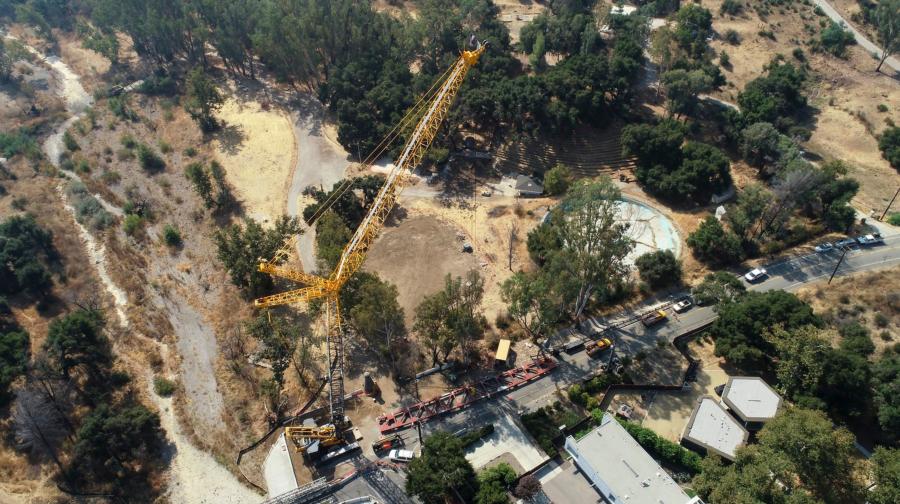 "Completing this project brought a sense of relief and pride in our team," said Jackson. "It was gratifying to see the local community members come out for the dedication ceremony and share how thankful they were to see the new bridge finished. They also complimented our commitment to excellence and to the community."

The construction work began in May 2020 and the new bridge was dedicated in July 2021. Los Angeles County Supervisor Sheila Kuehl noted the cooperation necessary to complete an important project during the pandemic. "This bridge is an essential connector," she said. "Working together we were able to fast track the money that was needed for the reconstruction and then two months later, the county shut down. But even COVID didn't shut down progress on this construction. That says a lot about the dedication and determination of the people involved."

The bridge was awarded a construction award for outstanding innovation and design by the American Society of Civil Engineering. CEG