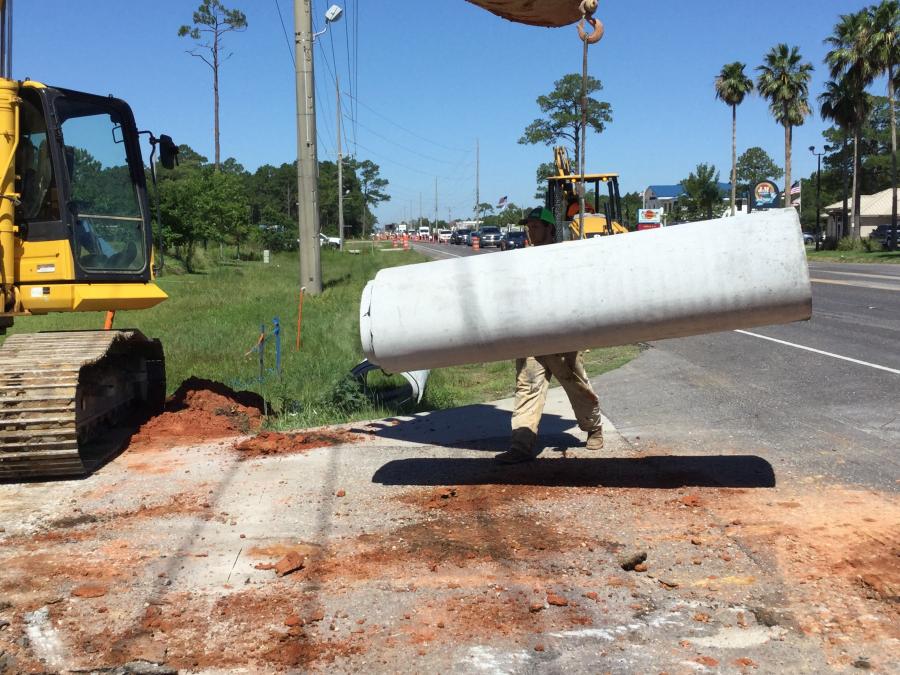 The project schedule is based on many benchmarks: The installation of the 24-in. temporary sewer line bypass valve installation (done by the city); 11 pipe crossing crossings that required daily lane closures; and paving of the new westbound lane, as well as the drainage, have been completed. (John G Walton Construction photo)

"When complete, this portion of roadway, which carried over 18,000 vehicles in 2018, will be a five-lane highway including a designated two-way turn lane," said Katelyn Turner, ALDOT public information officer for the southwest region. "We look forward to bringing this project to fruition as it will better accommodate the volume of traffic this roadway carries especially during the summer tourism season. The project was authorized in December 1999, however sufficient funds did not become available until the 2010 BP Oil Spill settlement, which provided enough funds to be able to let the project for contract. This project will help alleviate the congestion this portion of SR-180 experiences year-round, but especially in the summer as it carries traffic to and from the Foley Beach Express, which is a popular route for Orange Beach visitors as it provides the quickest access to that vacation hot-spot."

The widened highway, with 6-ft. wide shoulders on either side, is designed to handle a projected average of 36,200 vehicles daily through 2039.

The project is managed by ALDOT and designed by Burk-Kleinpeter Inc. 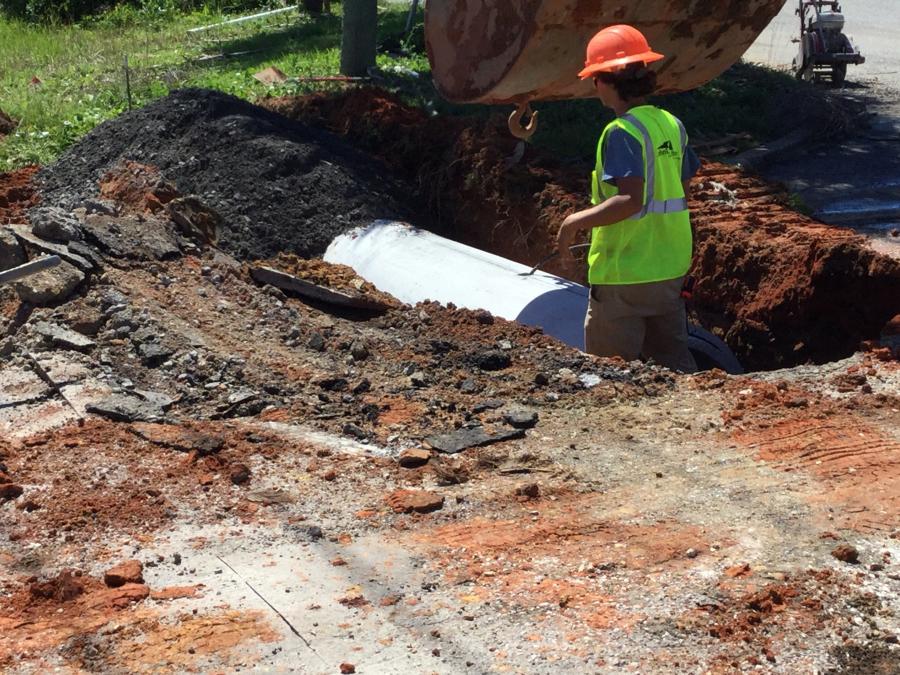 Preliminary utility work started prior to the Sept. 23 start and covered cable, water and sewer, and gas is 90 percent complete.

"We have weekly meetings with ALDOT, the city, and the utility companies," said Michael Gibson, P.E., John G Walton Construction's project manager. "We had to do a lot of coordination with every utility company to make sure they were ahead of the road construction and if they weren't, schedule accordingly. Mayor Tony Kennon was very helpful about getting them to cooperate so they didn't hold up the project."

The project schedule is based on many benchmarks: The installation of the 24-in. temporary sewer line bypass valve installation (done by the city); 11 pipe crossing crossings that required daily lane closures; and paving of the new westbound lane, as well as the drainage, have been completed.

The pipe crossing work was not easy, but fortunately it did not require any night work.

"We had to do half of each crossing at a time, so we could keep traffic moving while we installed drainage pipe, placed backfill and paved with asphalt," said Johnny Walton, the general contractor's owner and president. "We had to coordinate the work of the pipe laying crews with asphalt crews. Everything went smoothly."

Eastbound traffic was moved to the westbound side last March and the new eastbound lane should be completed in October. The final wearing surface and permanent stripe and markings will be placed after the eastbound lane is ready and the installation of two mast-arm signals components at the intersection of SR-180/Gulf Bay and SR-/William Silvers Road has started and should be completed in the summer.

"The biggest challenge is the traffic' said Walton. "We tried to get as much done in the fall and winter months to get ahead of the spring break season and we succeeded. This has allowed us to work more freely now that the traffic is more horrendous with the summer tourists and beach people."

The city is letting the general contractor use a vacant lot to store materials and equipment and set up a field office. The state's COVID-19 restrictions reduced the flow of traffic, which allowed crews to complete goals more rapidly.

Good relations with ALDOT have been essential.

"We had design changes and hiccups that had to be worked out with the designers and that went well," said Gibson. 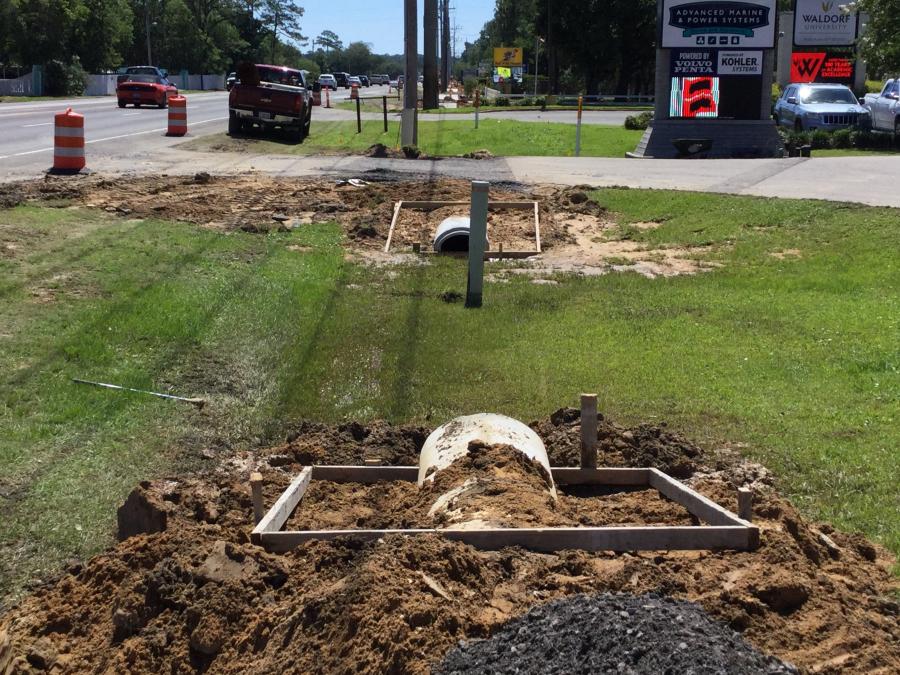 The roadway has been temporarily striped into a five-lane highway with a designated center turn lane. Sodding was done by T.E.C.S LLC and was placed on the westbound side as the new lane and drainage ditches were built.

Excavation and road construction crews work simultaneously, following each other.

"Orange Beach had a big sewer line running under the shoulder of the westbound road, which was fairly shallow, so we couldn't do the full-depth excavation that was planned and run our compactor to get compaction," said Gibson. "ALDOT made a change. We shallowed up and didn't have to do as much excavating and we were able to build on top of the existing material as not to damage any of the sewer lines. It was all sand down there, so excavation was easier. The sand could not be reused on site."

On a good day, between 800 and 1,000 ft. could be graded and have crushed aggregate bases placed on the widening,

"They had a timeline to complete the westbound lane and we finished it a month ahead of schedule," said Walton. "This has sped up the project. We had a GPS model built for the job that allowed us to save a little bit on the surveying and run our GPS equipment with GPS systems."

Walton noted that the Komatsu PC210-LCi excavator and D39i dozer have been the most integral pieces needed to complete the job.

"The D51-i was too big to work on the widening of the lanes, so we purchased the D39i" he said, "which is a smaller dozer and much more suited to the widening work. They have GPS capabilities built-in to them and they really have it down pat — you don't have to add antennas to them."

Topcon GPS systems are in use on the project.

The pipe and drainage infrastructure installation for the eastbound lane construction is also ongoing.

Gibson and Walton are assisted by Scott Appleton, the project superintendent.

"Scott is our feet on the ground and runs the job — he makes mine and Johnny's life a lot easier and he is very knowledgeable about GPS systems," said Gibson. ‘We've got a good crew. They take long hours on day and don't complain. They'll stay late and do whatever it takes to get the job done." 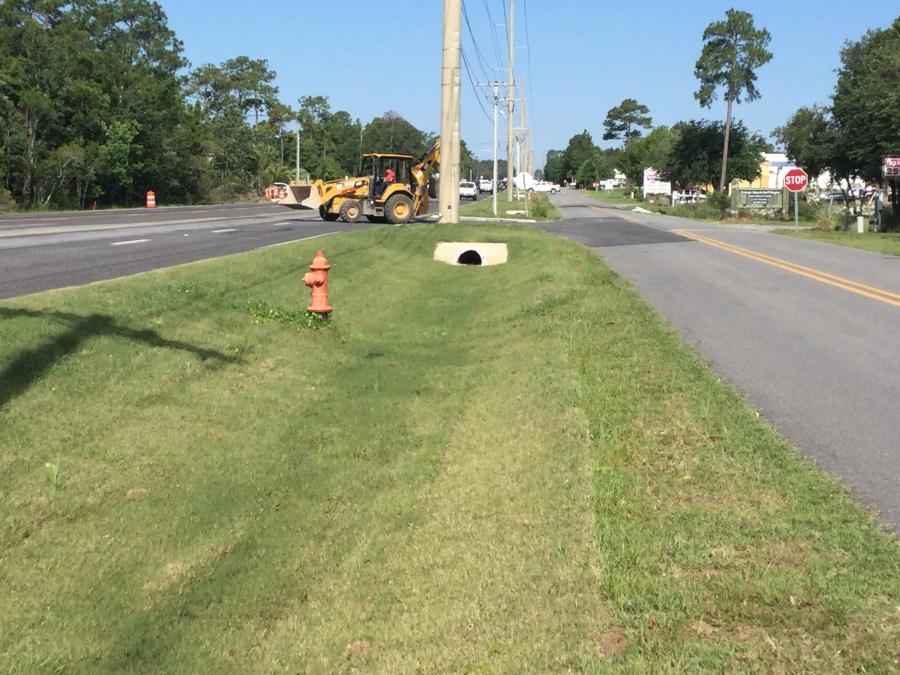 "The five inches of top soil was re-used on the project." said Gibson.

"The pieces of equipment that we're using are relatively new and we've had very little repair work to do," said Walton. "Most of the equipment we buy nowadays has extended four-to-five-year warranties because with all the computers on equipment today, it's hard for us to work on them."

The firm has in-house mechanics that service equipment at the shop and in the field.

"These are your four major dealerships down here," said Gibson. "They're all pretty good about having spare parts readily available or next day service."

"They give us good service and we have good relations with them," said Walton. "It's all about good customer relations, having a relationship with them where they what you need and expect. If we need a part or piece of equipment, they'll make it happen." CEG