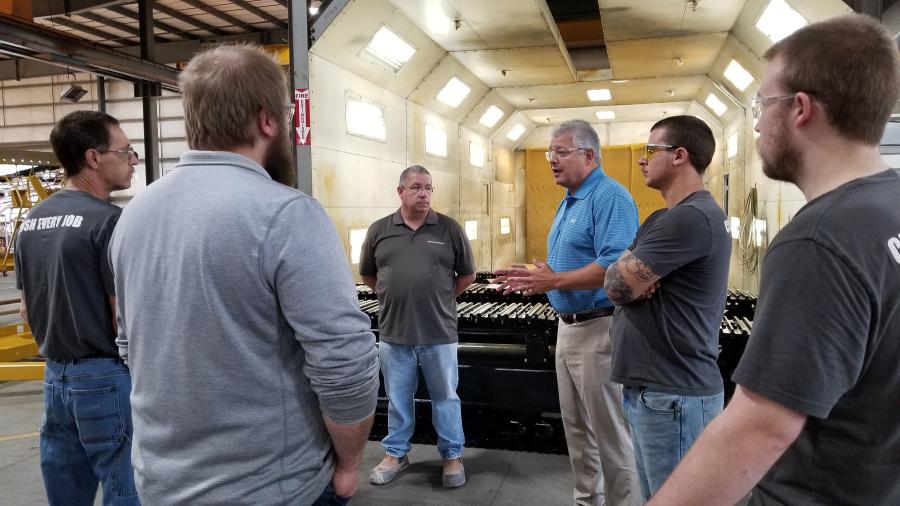 You could call John Lamprinakos a man of steel. And you would be correct.

Lamprinakos, who recently joined Screen Machine and Diamond Z as president and CEO, spent four decades at Worthington Steel, leading sales and production on a variety of steel products.

Now he will help guide Screen Machine and Diamond Z as they produce high-volume, mobile crushing, screening, grinding and chipping machines made from very heavy metal.

But while steel is a recurring theme in Lamprinakos career, it's the challenge, and opportunity, to elevate the success of Screen Machine and Diamond Z that brought him to his current role.

"When I toured the facilities here and saw the pride and dedication of the employees of both companies, and realized the potential both have for tremendous growth in the future, I was hooked," said Lamprinakos, who has gone by simply "John L" throughout his career. "Obviously, after 40 years at Worthington Industries and having been president of a multi-billion dollar enterprise, I could have easily just retired. But the opportunity here at Screen Machine and Diamond Z is too good to resist."

Screen Machine is a manufacturer of mobile crushing and screening equipment with more than a half century of successful innovation. All its machines are manufactured in its Etna, Ohio, headquarters. In March, 2019, Screen Machine acquired Diamond Z of Caldwell, Idaho. Diamond Z is a top producer of grinding and chipping machinery. Both companies are owned by The Crane Group of Columbus, Ohio.

After college, Lamprinakos sought a job in the steel industry, but opportunities were scarce. Then he secured a sales position with the growing Worthington Industries company in Columbus, Ohio.

"[Founder John H. McConnell] had every employee work on the factory floor for the first three months, and I learned so much about business and manufacturing during that time," Lamprinakos said.

"The culture at Screen Machine and Diamond Z, as well as The Crane Group, is all about respect, communication, generosity, loyalty and family. Those are exactly what we held as tenets of our company at Worthington Industries. My role here will be to build upon those principles as we continue to produce machines that meet and exceed the expectations of our customers."

As a starting point, Lamprinakos returned where he began at Worthington Industries four decades ago — the factory floor.

"I'm not the expert of the best practices here, the people doing the work every day are. I intend to spend a great deal of time with them, as well as our sales team and our dealers, to learn all I can as we build a path toward our future success, and crush every job."