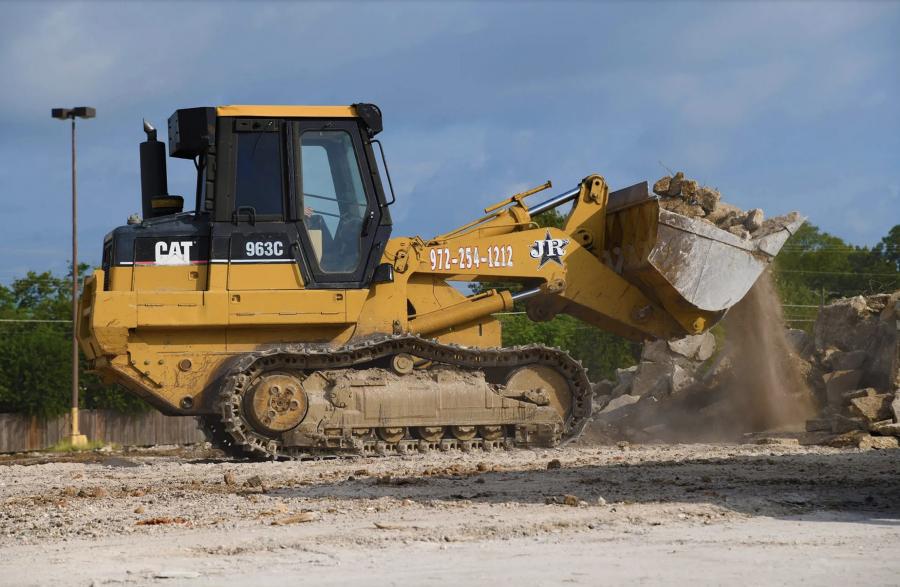 Planning is ongoing for the redevelopment of the Plymouth Park Shopping Mall in the South Irving section of Irving, Texas, but JR Demolition and Excavation has already completed the demo work in September.

The company tore down the equivalent of three city blocks in September on the 144,000-sq.-ft. site.

The property, owned by Cali Tex LLC, had a large parking lot on both sides and two sections of strip malls, mainly one-story structures, save for a movie theater that was two stories. JR Demolition was required to demolish most of the structures and the surface of the parking lot to make way for the construction crews. 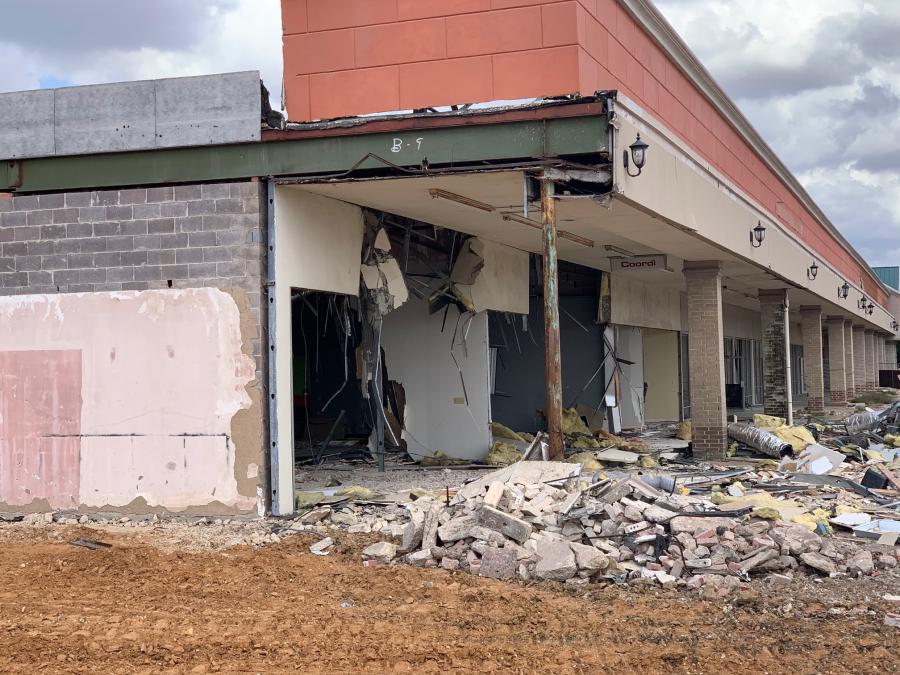 "I'm excited to see that they are doing something in South Irving," said Bobby Lindamood Jr., the owner of JR Demolition and Excavation Inc. "That property has been there for a long time and many of the residents of the neighborhood and the city were happy to see those buildings go so they can build this new project. Irving has two sides – North Irving and South Irving. South Irving doesn't get all the nice stores and the attention the North does, so it's a big deal for the area when everything goes through."

Another company had started the demolition, beginning with the theater, but it ran into some issues and JR Demolition was brought in to complete it and demolish the whole site, save for a few buildings to be retained, including the post office and a few other stores. The strip mall contained a collection of dollar stores, tool stores, some Mexican restaurants and various others.

The new development is expected to have commercial on the ground level and several floors of condominiums on top of it.

The demolition work began last May, but it took about six months to negotiate the contract; have the power, has and water utilities shut off; and for the asbestos to be removed.

"There was quite a lot of asbestos that had to be removed before we could go on-site and it took about four months to take it all out," said Lindamood Jr. 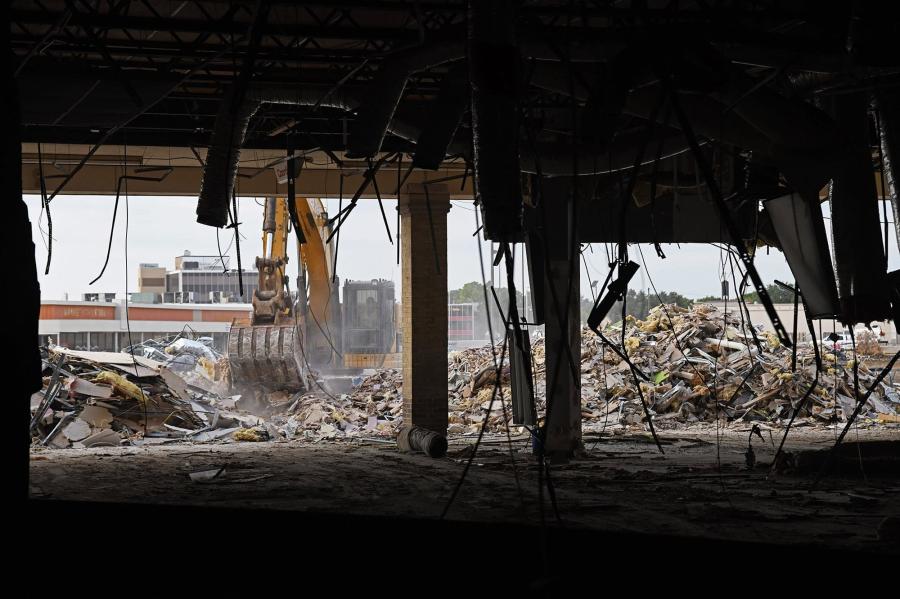 "Because we are so fast, we had to halt our operations as the asbestos removal company was still pulling out material," said Lindamood Jr. "We pulled out the parking lot on each side and for the sections of the strip mall that were to remain; we had to separate a couple of walls. You have to make sure that everything is supported correctly, all the utilities are shut off and the roof separations are lined up. It was an extensive operation to get the walls separated. We had to separate the theater from the strip mall and a similar process for the post office and a Payless shoe store. We did this by saw and roof cuts. There were dividers inside and it was tricky, but we know we know what we're doing.

"It took about 1.5 months to do each side of the mall and a month to haul all of the paving – there about 300,000-square feet," he added. "It can be rough on the equipment if you don't know what you're doing."

The crews had plenty of room to work, save for the sections that were to remain. The site was flat and the equipment could maneuver around easily.

"The owner had a bit of a challenge getting the asbestos removed – it took quite a while and once the utilities were disconnected, everyone got out of our way because we bring down buildings pretty quickly," said Lindamood Jr.

Prior to pulling down the structures, crew members removed the electrical and copper wire. Via the electrical boxes, the wires could be taken out easily.

The debris from the buildings was sorted immediately.

"When we pull something down, the materials are separated and placed into steel, concrete, and trash piles," said Lindamood Jr. "We recycle as much as we can. The wooden material goes to the landfill where it used to create methane gas as it deteriorates."

"We found a couple of rogue sewer lines that nobody knew about," said Lindamood Jr., "but they were patched up and repaired."

Getting the equipment to the site, approximately 2. mi. from JR. Demolition's office and equipment yard, was fairly easy.

"We have out own low-boys and trailer trucks to move our equipment any time I want," said Lindamood Jr.

Wear and tear on the equipment was minimal.

"We hardly had anything other than having to replace the bucket teeth because we tore out so much concrete," said Lindamood jr.

The company's shop has three mechanics that can rapidly reach sites in Dallas and fort Worth. The chief mechanic, Kevin Lemerand, overseas shop operations, along with James Rich, and Tommy Snipes.

JR Demolition purchases and rents equipment from RDO Equipment in Irving and other regional dealerships.

"I buy from all over," said Lindamood Jr., whose company owns a wide variety of machines and vehicles. "A lot of it is stuff I see online. I've known equipment all my life and can tell you what's wrong with it and what needs to be fixed – the whole nine yards."

‘We pretty much do everything else, unless it is a deep motor or something like that," said Bobby Lindamood Jr. "We have skilled mechanics."

Good relationships with dealerships are crucial for Lindamood Jr.

"I've been in this industry all of my life and most of the places I frequent to they've known me since I was kid," he said. " It's fun to go in and still see old friends. They take really good care of us because they know we are very loyal. We have excellent relationships with the people who help us."

Heavyquip in Irving, although it does not sell equipment, provides parts and services for JR Demolition's fleet.

"They are great people to work with," said Lindamood Jr.

The businesses that remained open during the demolition operations were able to operate continuously for the most part. When crews approached them, operations slowed down to ensure that they were not damaged. Efforts were made to ensure that employees and customers did not park in the work area.

"Everything went according to plan," said Lindamood Jr. "We had a game plan and a safety plan and ample time to prepare both."We set up an erosion control system around the site to prevent any dirt and other materials blowing out all over the parking lot. We graded the area and hand-picked it to make sure it was smooth and clean."

The company self-performed all of the work, with a crew of eight that worked day shifts ranging from 7 am to around 5:30 pm. Billy Lindamood served as the Assistant Project Manager. The drew consisted of two ground crew, three operators, and four truck drivers.

"My crews are fantastic," said Bobby Lindamood Jr. "They are some of the tops in the business, which is why we have so many people call us to do their demolitions. We've been in business for a long time and we offer a top quality service and have tons of repeat customers because of the way we work.. When we finish a project, we act like it is our's and put our signature on it – that's what I tell our guys all the time.