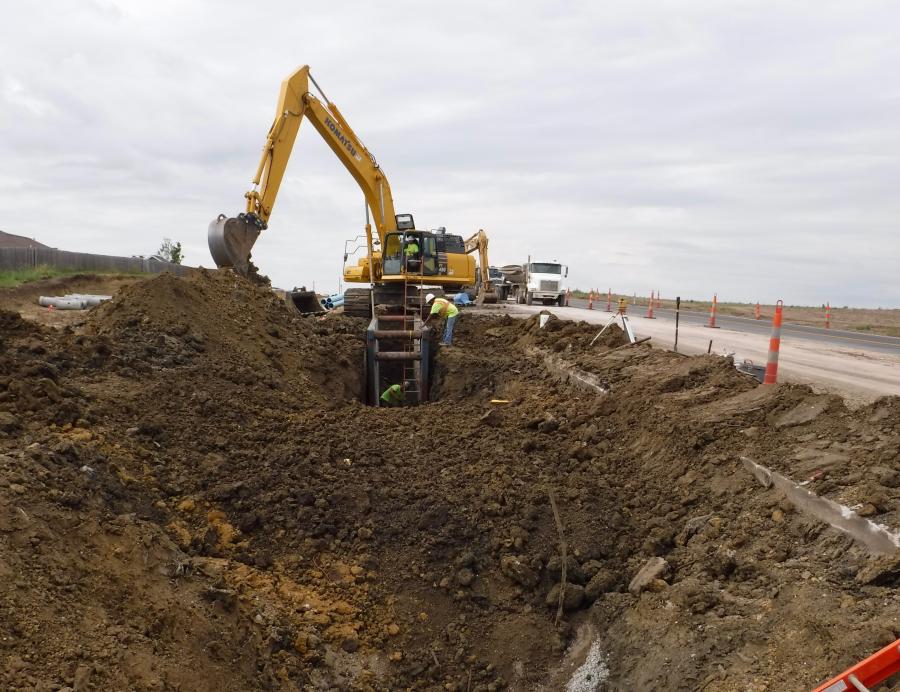 Reconstruction of a 2 mi. (3.2 km) segment of the city of Lincoln’s NW 48th Street between West Vine Street and West Adams Street began March 30, 2015 when crews from K2 Construction, based in the city, arrived on the scene of this project, which also is

Reconstruction of a 2 mi. (3.2 km) segment of the city of Lincoln's NW 48th Street between West Vine Street and West Adams Street began March 30, 2015 when crews from K2 Construction, based in the city, arrived on the scene of this project, which is also close to the diverging-diamond interchange that Nebraska Department of Roads (NDOR) is building.

The project, to be completed in September or October, is expanding the road from two lanes (one in each direction) to a four-lane divided road between West Holdrege Street and W. Adams Street and south of W. Holdrege Street, will become a six-lane road to match NDOR's interchange project. Only five lanes are being built now. Olsson Associates was selected by the city as the design consultant for the project.

“The segment between W. Adams Street and Highway 34 is not scheduled for construction at this time,” said Erika Nunes, PE of the city of Lincoln's PW&U, engineering services, “but preliminary design plans have been completed. NW 48th Street is an important arterial connector for the entire community, and public meetings were held throughout the project to ask the public to share thoughts and concerns so that design engineers could incorporate public feedback into the design.”

Four major public meetings were held between 2013 and 2015 to ensure that the community had its say and understood why the project was needed.

“We also met one-on-one with many stakeholders on this project,” she said, “including Arnold Elementary School, the Lincoln Housing Authority, the Lincoln Airport Authority, Lincoln Fire and Rescue, StarTran, multiple property owners and developers, businesses, utility representatives, and elected officials.”

“All segments included in the city's Arterial Street System were prioritized using those seven goals and NW 48th Street from West O Street to West Adams Street ranked as the next segment needing to be constructed,” said Nunes. “The remaining section of NW 48th Street to the north of West Adams Street is further down on the priority list, but preliminary design plans and environmental reviews were still completed to provide better project coordination between the segments and with future development plans for the area. The city also is exploring possible options to mill the existing surface between West Adams Street and West Fletcher Avenue and overlay it with asphalt as a separate project.”

Prior to the start of the road work, some private utility companies had started removing and relocating some of their infrastructure in the fall of 2014 and the project was bid in December 2014.

Nunes is fully aware of how such projects can disrupt neighborhoods.

“We designed it with the goal of minimizing access disruptions during construction,” she said. “Since NW 48th Street is a major arterial street with limited detour options, the design team was looking to maintain traffic and access during construction using the existing and/or temporary driving lanes.”

Casey Thompson, K2's project manager, notes that his crews are working hard to rebuild the existing lanes and lay down the new ones. The schedule called for the first half of the road to be rebuilt and widened in the first year and to complete the remainder in 2016. Local traffic was able to start using the newly constructed lanes just after the Christmas holidays.

“A lot of utilities — electric, cable, phone and gas lines — were still being moved,” he said, “and there were right-of-way acquisitions that delayed the work. The city had a hard time obtaining some of the right-of-ways. Everything is inter-connected and the city understands the constraints we have encountered and they are really good to work with. Olsson Associates is still heavily involved in all of the day-to-day decisions and meetings. Everyone is working as a team, especially when we run into issues — it could be a small redesign, but we'll come up with a solution.

“This project has not been smooth sailing — it's pretty difficult as far as pavement and maintaining traffic,” Thompson said, “as we have some tight working areas. The old road is just that — it's failing and maintaining traffic on it is difficult. Keeping the road safe and the project safe is a challenge with the high volume traffic and that also affects scheduling deliveries of construction materials and bringing in trucks and equipment during the day.”

To help keep the construction workers safe from motorists speeding along the work zone, K2 has arranged for a greater police presence and placed concrete barriers in key areas, with less dangerous areas set aside by cones and barrels.

“The community supports the project,” said Thompson, “and many of the neighborhoods really appreciate seeing our crews fixing up the road even though it's frustrating for people when they have to deal with all the construction traffic issues.”

During the winter break K2 is focusing its efforts on the remaining utility construction and the installation of a large box culvert that crosses the entire road.

“It is being built in three phases and we'll get the third phase done as soon as we get traffic switched away from the work zone,” said Thompson. “We mainly work during the day. We have done some weekend work when required and some night work with the water lines and other aspects that cannot be done during the day.”

The construction season begins in mid-March and at that point Thompson expects to have nearly 50 K2 and subcontractor personnel on site.

Materials delivery has not been a problem, save for occasions when heavy rains have caused the work areas to become filled with mud, which requires the materials to be placed on paved areas and then transferred when conditions improve.

K2 purchased a HVR85 excavator mounted vibratory hammer from Hammer & Steel Inc. to deal with a significant amount of sheet pile shoring and a large Komatsu 490 excavator from Road Builders Machinery Co Inc. and Supply to help with the storm sewer work.

“We are parking our equipment on site, usually near where we are working and for our field office, we are renting some space from the airport authority nearby — they have been very helpful,” said Thompson. “Our shop is 15 miles from the job site and we bring in mechanics when we need them. We place a lot of responsibility on the crews as far as checking fluid levels, greasing the equipment and keeping the tracks clean. Our crews also report the hours on the equipment back to the office where oil changes and other service intervals are scheduled. We haven't had too many equipment failures other than a few blown hoses and flat tires. “The mechanics do a good job,” he said. “We have some older pieces that sometimes need a little more attention, but generally most of the fleet is in excellent condition. K2 is proud of its fleet and expect it to be taken care of. The operators speak directly with the mechanics and let them know if something is wrong. If they say 'this thing is not running quite right,' we usually get it looked at quickly.”

K2 likes to support local dealerships and gives them opportunities to come up with solutions for equipment purchases. It also makes purchases at auctions. Some of its local dealers, located in Lincoln, are Road Builders Machinery Co Inc., Nebraska Machinery, Titan Machinery and Murphy Tractor.

Thompson praised the efforts of Billy Kaster and Jesse Reeves, pipe foremen, and Ron Geebers, structures foreman, as well as Jeff Webert, the project estimator and Charlie Heng, the operations manager. He also appreciates the support that he receives from company owners Travis Sondgeroth and Tom Rogge.

“It's a team effort,” said Thompson, who has been in construction since 1995, including the time when completing his college degree. “The way I manage — I rarely just tell people what to do. I always try to get their input so that we have the best plans to move forward. This project has some unique challenges as far as the sequence of what we have available to work on via the timing and restricted areas. There are times when we complete one element and then move on to a section at the other end of the project. The scheduling for this project has been more difficult than most, but other than that, it's got all the challenges of building a new road.”

“We donated a loader and personnel to help a neighborhood charity collect old tires, and that was appreciated,” he said. “The neighborhood association has also asked me to write updates about our work in its monthly newsletter — it's important for the people to know what is going on.”

Prior to the start of the work, Thompson participated with the city of Lincoln and Olsson Associates in community meetings to discuss the overall plan and its impact on the neighborhood. He and Erika Nunes also attended a meeting with a local coffee group to provide updates and answer questions.

“Public relations are important for this project,” he said. “We're out here disturbing their world so it doesn't hurt to give back to the community and participate in some of their activities.”