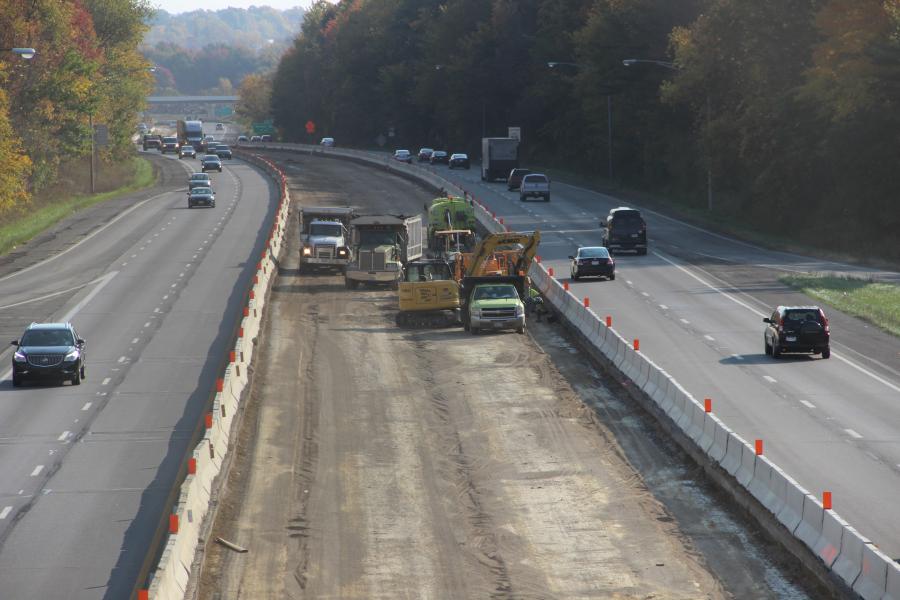 Crews from Kenmore Construction Inc. are widening a 5.6-mi. stretch of Interstate 76 from two lanes to three lanes in each direction between SR 21 and Central Avenue.

Crews from Kenmore Construction Inc. are widening a 5.6-mi. stretch of Interstate 76 from two lanes to three lanes in each direction between SR 21 and Central Avenue. The $87.6 million project began last August, and the Ohio Department of Transportation (ODOT) project should be completed in July, 2019.

The work — a design build project, in the area of the cities of Norton and Barberton, also includes pavement replacement on I- 76 between the Medina County line and SR 21 and the re-decking of twin bridges on I-76 over SR 261 in Medina County. The project is being funded by ODOT Major Rehabilitation.

The project also includes the construction of extension of entrance/exit ramps at interchanges; culvert reconstruction and replacement; drainage improvements; and full-depth pavement replacement along the mainline and ramps and noise wall installation.

ODOT completed a bridge condition rating survey in 2012, which found that there are 12 structures existing within the work zone. Two bridges over Clark Mill Road over IR-76 and Summit Road over IR-76 have been replaced as an earlier separate project.

“The in-depth inspection determined the condition of the structures ranged from average to good,” according to an ODOT document. “Six structures were classified functionally obsolete and one structure was classified structurally deficient.”

The project is replacing three structures, rehabilitating two, providing minor maintenance to five, and doing a channel cleanout at one.

The new road surface has been designed to better withstand the daily impact of trucks in order to give it a 20-year lifespan.

“The original roadway was built with concrete pavement and as we do a lot of times, we just pave asphalt over it,” said Alec Pack, ODOT's project engineer. “This leads to a lot of issues. We're ripping all that out and treating the subgrade with cement stabilization, which give it more strength. Afterwards, we're building a full-depth asphalt pavement which gives it more continuity.

“The roadway is being designed for heavier traffic than is being anticipated,” he added. “It leads to a thicker pavement or deeper stabilization depths for our subgrade. It will cost more, but it will definitely improve the lifespan of the roadway. Passenger vehicles do virtually no damage to the roadway — the damage can either be attributed to weather or trucks once you boil it down.”

“The improved capacity — adding the extra lane,” said Kovacs, “is going to reduce throughlane crashes by giving more space for motorists to travel through. The proper exit/entry ramps will prevent dangerous merge conditions and give more time for traffic to merge.”

“We're also upgrading the highway lighting throughout the roadway, including interchange ramps and a small half-mile section where we are adding continuous lighting along the interstate's median,” said Pack, “bring it up to today's standards.”

Throughout the work, two lanes of traffic will be maintained in each direction of I-76 during peak travel times.

“One lane of traffic [12 ft.] is being maintained in each direction of I-76 during non-peak travel times,” said Kovacs, “and various ramp closures are occurring at the I-76 and SR 21 interchange and at the I-76 and Barber Road interchange. Overhead bridges will close for short durations. All detours are being posted to help motorists and access to businesses is being maintained at all times throughout construction. Concern about traffic and access were raised by many at the public meetings and we have taken that to heart.”

Pack is pleased with the progress that Kenmore crews have made.

“The 2016 construction season was uneventful, which is always good for us. The work was confined to the existing median — a grassy area that was paved in.”

This year's work will see the existing westbound lanes and interchange ramps be rebuilt, as well as the westbound sections of the I-76 bridges and half of the overhead bridges on Cleveland National Road.

“I'm not anticipating any challenges at this point,” said Pack. “It's definitely a large volume of work — that is the biggest challenge. Communications between Kenmore and ODOT have been fantastic so far. That is one of the positives of a design build-type project — it fosters more of a team work atmosphere, more of a partnership. Sometimes in the other ways that we do a job, it can feel challenging at times.”

Two challenges are being dealt with — one environmental in terms of an endangered bat species and clearing a section of forest and how that impacts traffic, and the other being the roadway deteriorating more rapidly than expected.

“It was a struggle to maintain the roadway during the winter months,” said Pack.

The main construction goals of 2017 are to reconstruct the existing lanes of I-76, including half an overhead bridge over I-76 at Cleveland-Massillon Road (two lanes in southbound) and four mainline bridges (two lanes in one direction).

“We're about 30 percent complete right now,” said Pack. We've basically done all the clearing and grubbing, and have completed and paved one ramp. About 85 percent of the job needs to be cement stabilized and quite a bit of bridge work remains.”

The work is being done at multiple sites over a 5-mi. area.

Planning was key to the work on the design-build project.

Weekly design meetings were held between ODOT and Kenmore between April and December of 2016 to review the design coordinate the work and scheduling.

“This was shorter compared to our normal design and production process which takes multiple years,” said Pack. “The biggest lesson learned is the value of personal relationships — learning how to work with the contractor, what their goals are and what they are looking for. Kenmore values their time and everything about this project revolves around time and they appreciate having time responses. Being able to treat the contractor as a member of the team as opposed to an adversary is working pretty well so far.”

The westbound bridges are being dealt with this year.

“The new mainline bridge is going to be one giant structure,” said Pack. “Kenmore is demolishing the westbound structure right now and will rebuild it. The eastbound structure will be rebuilt in the following year. The bridge work is controlling the entire timeline of the project because of the vast amount of work that it entails. Once the mainline bridge is demolished, it's more difficult for the contractor to have mobility.”

This year's roadwork focuses on northern half of I-76.

The materials suppliers are close by, with materials coming from the Akron area. Concrete is prepared by local suppliers and Kenmore's subsidiary companies are supplying the asphalt and aggregates.

Pack noted that there are few utility issues associated with the project, save for the overhead electric transmission lines crossing the bridges.

“So the only time that you really come into conflict is when you bring in cranes to set beams for the new bridge decks,” he said. “It just takes a little more coordination to stay out of the way of the lines. For the road, there are very few utilities within our right-of-way.”

Kenmore has leased a large space from a landowner along I-76 to store materials, park equipment, and establish offices.

The amount of materials being removed and brought in by Kenmore is still being tabulated.

“Kenmore is recycling the milling and a lot of that material is being taken back to their yards and asphalt plant for re-use,” said Pack. “A lot of the other millings are being used as material for shoulder fillings.”

Pack added that many Ohio contractors recycle embankment material, asphalt millings and concrete pavement on site or at their yards for other projects.

On an average peak day of construction there are nearly 50 Kenmore and subcontractor employees, who are working 10 to 12 hour day shifts.